Ahead of today’s voting, representatives from the state Democratic and Republican Parties appeared on Monday’s Kentucky Tonight to discuss the primary elections and some of the factors that could influence the results.

Who Has the Momentum?
After the 2016 elections, state Republicans were riding high. The GOP held the governor’s office and won historic majorities in the both chambers of the General Assembly.

But the 2018 legislative session revealed some fractures in the party. Republicans split on the fate of three caucus members in the House who were accused of sexual misconduct. Then, some Republicans broke rank and voted against the pension reform bill promoted by party leaders. And nearly two dozen Republicans co-sponsored a House resolution condemning Gov. Matt Bevin’s criticisms of teachers who protested the pension measure and potential cuts to public education.

So, can Democrats capitalize on the GOP chaos and win back enough seats to regain control of the House?

The KDP’s Ben Self believes they can. He contends working-class Kentuckians – from teachers and public employees to union members – are upset with Republicans over a range of issues, including pensions as well as the GOP’s push for charter schools, prevailing wage, and right-to-work.

“The grassroots groups, they really got amped up and excited during session, marching on Frankfort, and letting their voices be heard in a way that’s never really happened before,” says Self. “Now I think people are really excited to turn that into actually voting.”

Despite the intramural turmoil, the GOP has delivered for the commonwealth, says Tres Watson of the RPK. He points to record-low unemployment, an improving workforce participation rate, and $9.2 billion in new business investments for the state.

“The last two years, if you’re a regular, everyday Kentuckian, have been pretty good for you,” Watson says. “I think when you go to vote this fall, people are going to vote on how they feel personally, not some of these larger issues.”

“Clearly we believe we have more bodies, we have better funding, and we have a better trained staff to go out and win the elections this fall,” Crosbie says. “We just feel very comfortable that we are going to be able to protect our seats.”

But bitterness remains over how pension reform unfolded, especially among education advocates. After failing to garner enough support for a reform plan proposed in the Senate, House leadership attached their pension plan to an existing wastewater services measure and forced it through the legislature in a matter of hours during the waning days of the session.

“You don’t hide solutions in a sewage bill,” says KDP’s Jacqueline Coleman. “If we don’t have a legislature that’s going to do it the right way, we’ll elect our own, and as teachers we’ll run and become that legislature.”

Educators concerned about the pension bill and public school funding marched on Frankfort several times during the legislative session, chanting “We’ll remember in November.” A record number of current and retired teachers also filed to run for office in Kentucky this year.

Incumbents Face Primary Challengers
Some 40 educators are on the primary ballot, and not all of them are Democrats.

“Travis Brenda is the teacher from Rockcastle County High School that has filed to run against [state Rep.] Jonathan Shell,” says Coleman. “He [Brenda] is a Republican who has primaried their majority leader, and so I think that speaks volumes about the fact that this issue transcends political parties.”

Republicans made Shell their House Majority Leader after the Lancaster farmer helped the GOP win control of the House in 2016. Poll watchers initially thought this year’s primary might be tight, but Watson says that’s only because Shell was too busy in Frankfort to campaign in the 71st House district that includes Garrard and Rockcastle Counties and part of Madison County. Since the end of the session in mid-April, Watson says Shell has knocked on thousands of doors and built a substantial war chest.

“Jonathan has shown an ability, since he first got elected, to raise money and a willingness to spend it to do what he has to do to win,” Watson says.

But Self says the very fact that the incumbent has to fend off a challenger from his own party does not bode well for the GOP or Shell.

“He spent over $100,000 on a primary race that should have not even existed if he was doing his job right,” says Self.

Watson says only the media thinks Shell’s primary will end up being close. Even if Shell did lose, Watson says that wouldn’t indicate any larger problems for state Republicans. Crosbie says Shell’s incumbent status and his fundraising prowess should give him the edge in his primary.

“He’s willing to go out and seek the funds necessary to hold on to that seat,” Crosbie says, “and I think it’s a testament to the job he’s doing when he raises that kind of money.”

Other prominent Republicans also face primary challenges, including Reps. Wesley Morgan of Richmond and Regina Huff of Williamsburg, and Senators Mike Wilson of Bowling Green and Ernie Harris of Crestwood.

Retirements Create Several Legislative Openings
Growing partisanship in Frankfort has led a number of veteran lawmakers to step down from their seats. In the House, 11 Democrats and ten Republicans have opted to retire this year. Both Self and Watson think that creates opportunities for their respective parties.

“You’ve got seven Democrat-held open seats outside of Fayette and Jefferson County,” says Watson. “We’re coming for them. They are seats [Republicans] didn’t pick up in 2016. I think we have a great shot at getting all of them.”

Watson contends the math favors Republicans: for every House seat the GOP picks up, he says Democrats must win two for them to trim the Republican majority, which now stands at 63-37 in the lower chamber. Plus he says many of the Democratic openings are in districts that now favor Republicans.

Even with the retirements, Self believes Democrats have the advantage this year, both from an enthusiasm standpoint and because there are no statewide races or a presidential contest to drive voter turnout.

“I feel really confident about our retirements,” says Self. “They’ve got 10 of their own that they have to defend as well… I think we’re going to be playing a lot more offense than defense this fall.”

Congressional Races to Watch
Six Democrats are vying for the chance to challenge U.S. Rep. Andy Barr, the incumbent Republican in the 6th Congressional district. The primary appears to be a close contest among top-tier candidates Jim Gray, a two-term mayor of Lexington, Amy McGrath, a retired Marine Corps fighter pilot and political newcomer, and state Sen. Reggie Thomas of Lexington.

“What I’m hearing most amongst Democrats is that they’re voting for either people that believe strongly with them on one value or another, or they’re going to vote for who they believe can beat Andy Barr the most in the fall,” says Self.

Since the late 1970s, the 6th has alternated between Democratic and Republican representatives. This year national prognosticators like the Cook Political Report have moved the district from “likely Republican” to “leans Republican.” Watson says the notion that the district might be competitive in the fall is “a mirage.”

“When it comes to Congressman Barr, he’s shown to be a great campaigner,” Watson says. “He’s well liked in his district because of his attention to constituent services, the fact that he gets hyper-local on issues, and gets very involved on an issue that may affect a handful of people.”

Watson says the district is a challenge for Democrats: If their candidate is liberal enough to win votes in Lexington and Frankfort, they’ll likely lose votes in the more conservative rural areas. A centrist Democrat might win rural votes, but then could lose urban votes, he says.

Glisson is expected to win the GOP primary and face incumbent Democrat John Yarmuth in the general election. Self says Yarmuth should easily win re-election.

But Watson warns that Glisson will be the first serious, well-funded Republican to challenge Yarmuth, especially for blue-collar voters in southern Jefferson County. Watson concedes that Glisson may not win, but he says she could help boost Republican turnout, which could hurt Democrat Greg Fischer’s re-election bid for mayor of Louisville.

”I think that race is going to be much tighter than the Congressional race,” Watson says. “If Vickie really gives Yarmuth a fight, that could mean the end for Greg Fischer.”

“There’s no doubt it’s a challenging district,” says Self. “But I think Congressman Massie is really, really out there in his beliefs… It doesn’t reflect the values of everyday Kentuckians. At some point that’s going to catch up with him.” 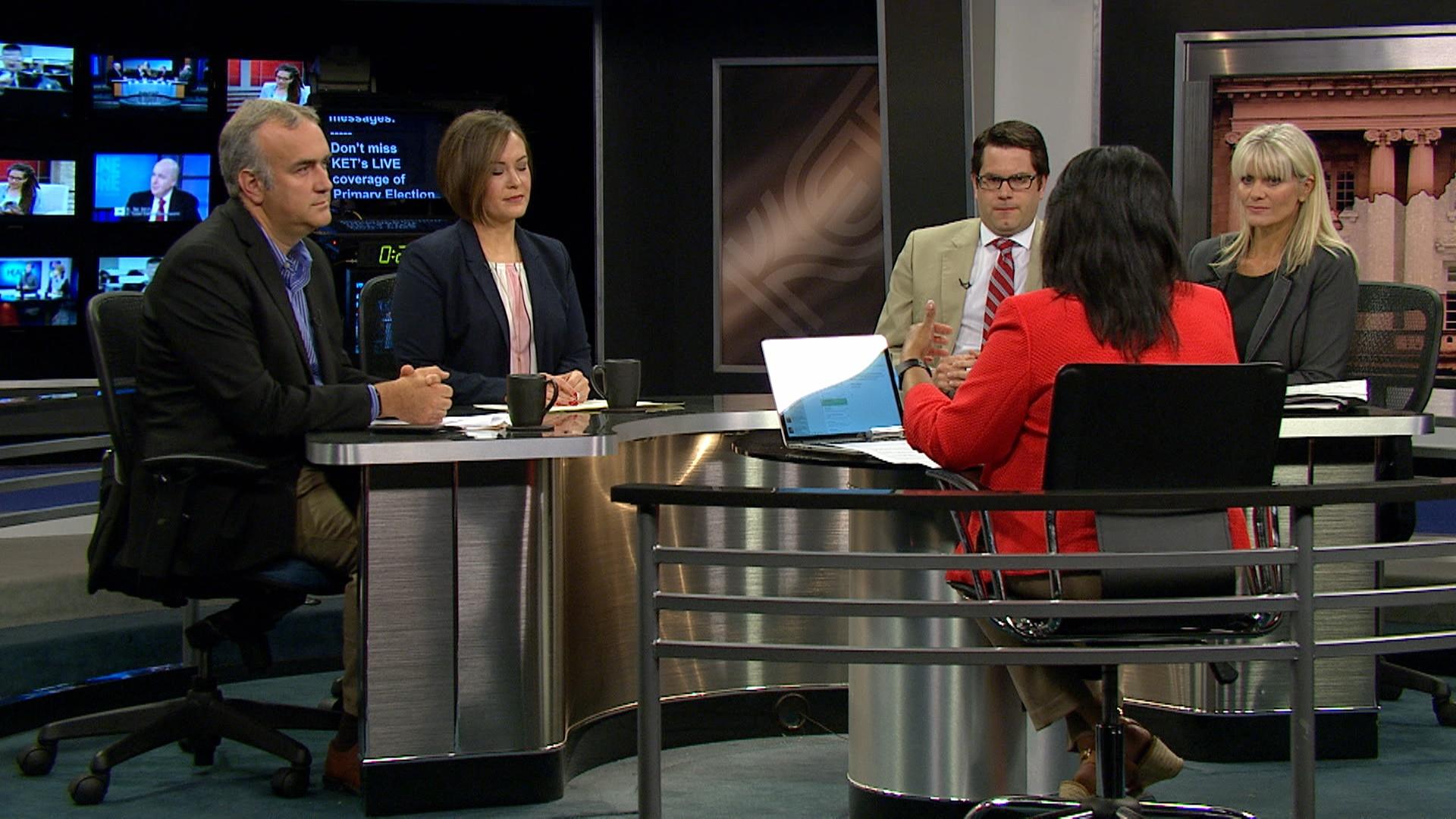