Renee Shaw and guests discuss the economy and trade. Scheduled guests: Bill Londrigan, president of the Kentucky State AFL-CIO; Andrew McNeill, state director of Americans for Prosperity-Kentucky; Jason Bailey, executive director of the Kentucky Center for Economic Policy; and John Garen, professor of economics in the Gatton College of Business and Economics at the University of Kentucky.
Season 25 Episode 20 Length 56:33 Premiere: 06/11/18

The national economy continues its long recovery since the recession of a decade ago. Wall Street is booming and the unemployment rate has reached historically low levels in the United States and in Kentucky.

But the good times haven’t helped everyone. Some regions of the country and some demographic groups are faring much better than others. There are people who lost jobs in the downturn who have yet to return to the workforce. And income inequality remains a persistent challenge.

KET’s Kentucky Tonight explored the good and the bad in the nation’s economy, as well as President Donald Trump’s trade policies. The guests were Jason Bailey, executive director of the Kentucky Center for Economic Policy; John Garen, economics professor at the Gatton College of Business and Economics at the University of Kentucky; Bill Londrigan, president of the Kentucky State AFL-CIO; and Andrew McNeill, state director of Americans for Prosperity-Kentucky.

How Good Is the Economy?
Taken on its own, the unemployment rate is remarkably low: 3.8 percent in the nation as a whole and 4 percent in Kentucky. But does that one statistic really reflect the overall health of the economy?

Economist John Garen says he looks at a combination of indicators: the employment and the unemployment rates as well as growth in overall productivity and the gross domestic product (GDP). While the trends are generally positive, Garen says Americans are also concerned about one other indicator.

“Ultimately for the average worker, it’s desirable for that to translate into wages,” Garen says. “That has begun to perk up, so that is a good sign.”

Wages and salaries for civilian workers rose 2.7 percent between April 2017 and April 2018, according to U.S. Labor Department data. But Garen says those gains are happening faster for higher skilled employees than for unskilled labor. He says it will take decades of sustained productivity and wage growth to create an economy that lifts people out of poverty.

Job numbers may be strong overall, but the AFL-CIO’s Bill Londrigan worries about how uneven the growth is. He says many rural counties and some minority groups continue to suffer higher unemployment than national averages. Unlike previous recoveries, he says this economic upswing isn’t benefiting as many people as it should.

“There’s this anomaly that’s taking place between what has happened in the past when we moved towards full employment to what we are at right now,” Londrigan says. “That is really not good for economy.”

Part of the problem for Kentuckians is that the state still hasn’t made up for what it lost during the recession, according to Jason Bailey of the Kentucky Center for Economic Policy.

What’s worse, says Bailey, is that the economy isn’t creating jobs that pay comparable wages to the positions that have been lost. He says more than a quarter of Kentucky jobs now pay below the poverty line for a family of four.

Andrew McNeill of Americans for Prosperity-Kentucky points to another troubling factor for the commonwealth: a relatively low labor participation rate. That compares the number of people who have a job or are actively seeking one versus those who have dropped out of the workforce.

Government statistics put the national workforce rate at about 63 percent, but in Kentucky the rate is 57.6 percent, which is the fourth lowest in the nation.

“Until we see our labor participation rate, especially here within the state, trend more towards the national average, then Kentucky is going to face some continuing challenges in terms of getting everybody back to work,” McNeill says.

Economic Policies and Income Inequality
Garen and McNeill credit President Trump’s push for lower taxes and less government regulation for accelerating economic growth. In the short term, they say Americans will see relief on their personal income taxes and many workers will receive bonuses or pay raises from employers that are now paying lower corporate tax rates.

McNeill says the even greater benefit will come over the long term as corporations invest more of their tax savings in domestic expansion, which will result in more job growth.

“When we had one of the highest corporate tax rates in the world, it became more and more difficult for corporations to justify investing in the United States when they could find a place with a better tax environment to invest in to build their productive capacity,” he says.

With even better tax incentives and more regulatory reform, McNeill says the GDP could grow as much as 3.5 percent, which he believes will create an economy that will benefit all Americans.

Bailey and Londrigan take a more pessimistic view of the benefits of the Republican tax package passed late last year. Bailey says the vast majority of benefits from the tax cuts will go to the wealthiest 1 percent of Americans. At the same time, he says government will have less revenue to fund infrastructure, safety net programs, and other services. And he argues that very few workers will see a pay increases or bonuses.

Bailey says demand spurs corporate expansion and therefore job growth, not tax savings. And demand for goods and services won’t increase unless workers have more money to spend, he says.

Londrigan says a better way to benefit labor and lift people out of poverty is to provide greater access to collective bargaining, stronger health care and retirement benefits, more job security, and safer working conditions. He questions how conservatives call for less government intervention in the economy, but then embrace a tax plan that he says has the government act on behalf of the wealthiest Americans and corporations. Londrigan says that contributes to income inequality.

“Society should be clamoring to change the system so that there is more spreading of the wealth of this nation so that everybody can benefit,” Londrigan says. “We’re going the exact opposite direction.”

Garen agrees there is a “moral imperative” to help struggling Americans. But he says a heavy government hand is not the way to go.

“It’s just a question of the means,” Garen says. “An important part of the means is enabling people to improve their lives through increasing their productivity [so] they will earn a better living, and not just taking from one group and giving to the other.”

International Trade and Tariffs
In some ways President Trump’s push to renegotiate international trade deals and place tariffs on certain goods may seem like a problem far removed from Kentucky.

But a trade war could have significant impacts on workers and businesses in the commonwealth. In retaliation for tariffs the president wants, other nations have threatened to place levies on American imports, including Kentucky bourbon, which is an $8.5 billion industry that employs more than 17,000 people.

But that’s not all. McNeill notes that UPS and Amazon, which depend on the free flow of goods around the world, also employ thousands of Kentuckians. The state’s aerospace and automotive industries could also be hurt by higher prices on foreign aluminum and steel. Since Kentucky is tied to the global economy, we should oppose any trade barriers, he says.

Between 15 and 20 percent of the American economy derives from international trade, according to Garen. In an ideal world, he says there would be low or even no tariffs. But the question becomes what should happen when one country dumps cheap goods into the markets of other nations.

Garen contends it would be silly for American companies not buy inexpensive steel from China, saying that’s a greater problem for the Chinese, who sell $1 million worth of steel for $500,000, than it is for the U.S. But he also acknowledges that American workers have been hurt in the process.

“A lot of people in small towns who are dependent on a particular industry have lost out,” Garen says. “So the answer is not to shut down trade, but the answer is to figure out ways in which the skill set there can be improved and made adaptable to the other kinds of jobs that are opened up with trade.”

The AFL-CIO has opposed many of America’s trade deals. Londrigan says that’s primarily because labor is nearly always left out of the negotiations. Not only does that hurt the rights of workers from all the countries signing on to an agreement, but he says it also undercuts basic human rights and environmental protections.

From his viewpoint, Londrigan says the goal should be fair trade, not necessarily free trade.

“We would want to have negotiations that make sense – we don’t need a tariff war,” Londrigan says. “The idea was to negotiate in a rational way to come up with methods to decrease differences between countries so that we have an equal playing field.”

President Trump tapped into the anger of many disaffected blue-collar workers in the 2016 elections by saying how American industries were unfairly hurt by deals like the North American Free Trade Agreement. Bailey there is a kernel of truth to the president’s argument. He says Kentucky has lost 46,000 jobs to China and about 12,000 to Mexico. He says those losses not only impact those workers and their families, but also ripple through the communities that have lost businesses and factories.

Bailey contends the argument shouldn’t be whether you are for or against free trade. It should be about who benefits from the policies that get enacted.

That can put America into a tricky negotiating position, says McNeill.

“Those trading partners are also going to point the finger at the United States,” he says. “We must be willing to also talk about the subsidies that are provided to American industry as well, and that’s a far bigger challenge politically than China bashing.”

Garen and Londrigan say Congress could and perhaps should play a greater role in trade policy. And in some ways it already does. McNeill says the federal farm bills, which are enacted about every five years, routinely contain a range of subsidies for American agricultural products. 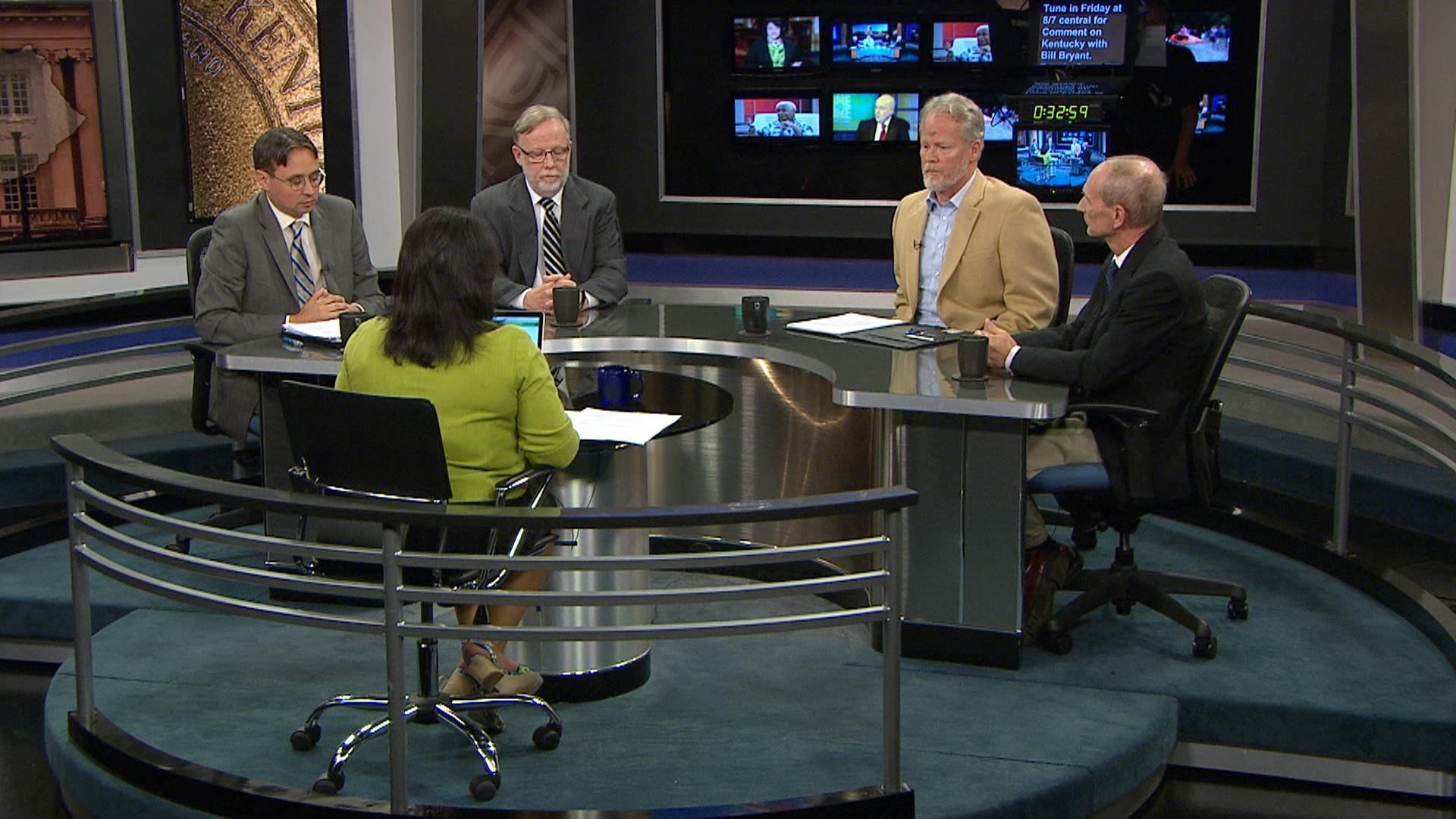