With so much attention focused on public employee and teacher pensions, there wasn’t much room during this year’s legislative session for debate about other important education issues like school choice, academic standards, and high school graduation requirements.

KET’s Kentucky Tonight convened a panel of education advocates and policy analysts to discuss those topics as well as the ongoing debate over school funding. The guests were Steven Gordon, associate fellow at the Pegasus Institute; Richard Innes, education analyst for the Bluegrass Institute for Public Policy Solutions; Brigitte Blom Ramsey, executive director of the Prichard Committee for Academic Excellence; and Stephanie Winkler, president of the Kentucky Education Association.

School Funding
Lawmakers did provide a slight boost in state funding to public schools to about $4,000 per pupil in the new budget biennium. That’s an all-time high for the state, but education spending in general in the commonwealth continues to lag behind the national average.

“We don’t think it’s adequate and what we see is a gap in equitable funding across the state,” says the Prichard Committee’s Brigitte Blom Ramsey. “That gap is approaching the levels that we saw in the late 1980s when the [state] Supreme Court ruled that Kentucky’s funding for education was unconstitutional.”

Ramsey says Kentucky students have made significant gains since implementation of the 1990 Kentucky Education Reform Act, moving from near the bottom of many national academic rankings among states to spots more in the middle. She contends that’s a significant achievement given the poverty and other challenges children in the state face.

But a new report from the Pegasus Institute suggests those gains may not be as great as they should be, given the extra money funneled to schools as a result of KERA. Lexington economist Steven Gordon, who co-authored that report, says between 1990 and 2015, public school funding in Kentucky increased 41 percent, but math scores only increased 8 to 11 percent for students in grades 4 and 8. Reading scores increased only 1 to 5 percent for those grades.

“The bottom line is that pumping more money into the current system the way it is now is just not the answer to the problems that we have today,” says Gordon. “Something needs to be done, and the answer is not to increase the aggregate total level of spending. If you want to increase spending in one area, that’s fine, but we need to cut it in another area.”

Ramsey agrees with Gordon that new investments should be targeted. She suggests a focus on early childhood education as well as college and career readiness for older students.

The problem is finding the money to pay for those programs as well as other state obligations, including the massive public pension debts.

“The commonwealth is starting to run up against some realities about how much more taxing can we really do with the population before we start to damage the economy overall,” says Richard Innes of the Bluegrass Institute for Public Policy Solutions. “Where do we find the revenue? We need to start talking about efficiency.”

The KEA’s Stephanie Winkler argues the issue isn’t costs but revenues. She says the state offers about $13 billion in tax credits, but only collects about $11 billion in tax revenues. Lawmakers did overhaul the state tax system earlier this year by lowering individual and corporate tax rates and adding the sales tax to more services, but left tax exemptions largely untouched.

Helping Teachers Do Their Jobs
Public education advocates are also concerned about teacher turnover and compensation. Ramsey says the Prichard Committee supports placing high performing teachers in low performing schools where they can do the most good, and providing them a pay incentive to work in those locations. She says more attention also needs to be given to attracting a wider range of people into the education profession so that the teaching force is as diverse as the student population.

Instead of paying teachers based on their years of experience and academic credentials, Gordon suggests adding merit-based factors to compensation schedules. He says corporations and non-profit organizations evaluate employee performance, and school districts could do the same with teachers.

One example of teachers getting a pay boost for student performance is the AdvanceKentucky program. Innes says it trains teachers to do advanced placement course instruction, and then pays them a $100 stipend for every student who scores well in those classes.

Ramsey says such programs require professional development funding, which she says has been sorely lacking in recent years. Then there’s also a question about the appropriate content for those programs.

“I think the reason, in part, that we’re having trouble with professional development as it’s been done up to now is they’re not really teaching the right stuff,” says Innes. “I don’t think we have as good a handle as we need to get on exactly what really does work in the classroom.”

Because all students learn in different ways and at different paces, Winkler says it’s hard to create a one-size-fits-all approach to professional development. She says another problem is that funding for the Kentucky Teacher Internship Program has also been eliminated. KTIP helps new teachers during their first year in the classroom

“It’s not for the faint of heart: teaching is a very difficult job and it weighs on you 24-7,” says Winkler. “You’ve got to remember that you’re there for those kids and for some kids, you’re the only person they’ve got.”

Winkler says she’s also worried about political influence over the Kentucky Department of Education. Earlier this year, Gov. Matt Bevin used his executive authority to overhaul the membership and duties of several state education boards. The governor also abolished the independent Education Professional Standards Board and moved its duties to the to the state education department. Winkler contends these moves could lead to decisions that undermine public education in the commonwealth.

Charter Schools
“If there’s one way to take politics out of public education it’s by giving students and their parents the freedom to choose,” says Gordon. “Introducing choice and introducing competition into education is exactly the direction we need to be going.”

The 2017 General Assembly passed enabling legislation to allow the formation of charter schools in the commonwealth, but lawmakers have yet to appropriate any funding for charter operations. Gordon says competition from charter schools is good because it will pressure low-performing traditional schools and teachers to do a better job.

Ramsey says Kentucky’s charter school law is one of the better ones in the nation because it was developed using best practices gleaned from other states. But she cautions that charter schools haven’t been universally successful. One area where they have proven helpful, she says, is with African American students from impoverished families living in inner cities.

Even in cities, charter schools shouldn’t function as the competition, according to Ramsey. She says urban centers do best when the charter schools work in collaboration with the local traditional public schools.

Graduation Requirements and Academic Standards
The state board of education is developing new high school graduation requirements for Kentucky students. Under the proposal, graduates would have to complete a minimum of 22 credits in English, math, science, social studies, and other areas. They will also have to be proficient at math and reading skills, pass a civics exam, complete financial literacy instruction, and other requirements.

“A generation-plus ago, the high school diploma was sufficient for someone to go out and get a family-sustaining job. That’s no longer the case,” says Ramsey. “So we have to ensure that all of our students are graduating with a meaningful high school diploma.”

Kentucky’s official graduation rates are about 90 percent, but Innes says that’s misleading. He says the “effective graduation rate,” which the Bluegrass Institute touts as a more accurate measure of students being prepared to enter college or the workforce, is actually closer to 64 percent for white pupils and 32 percent for blacks.

“We’re disproportionately giving a lot more of our kids of color a diploma with a lot less education than we’re demanding from our white students, and we can’t live with that,” Innes says. “We have to do this better for our minority kids and I think we can do it.”

The state is also implementing new academic standards that are meant to replace the Common Core Standards, which were unpopular among some lawmakers and interest groups.

Ramsey says educators and administrators are reviewing the language arts and math standards now. She says the new criteria must be rigorous and relevant for what students need to know and enable teachers to deliver deep learning in the classroom.

Innes says he’s yet to see much difference between the old Common Core and the new proposed state standards. He contends one problem with both sets of criteria is that they only say what students should know and be able to do, but they don’t say how well children should be able to perform those tasks. 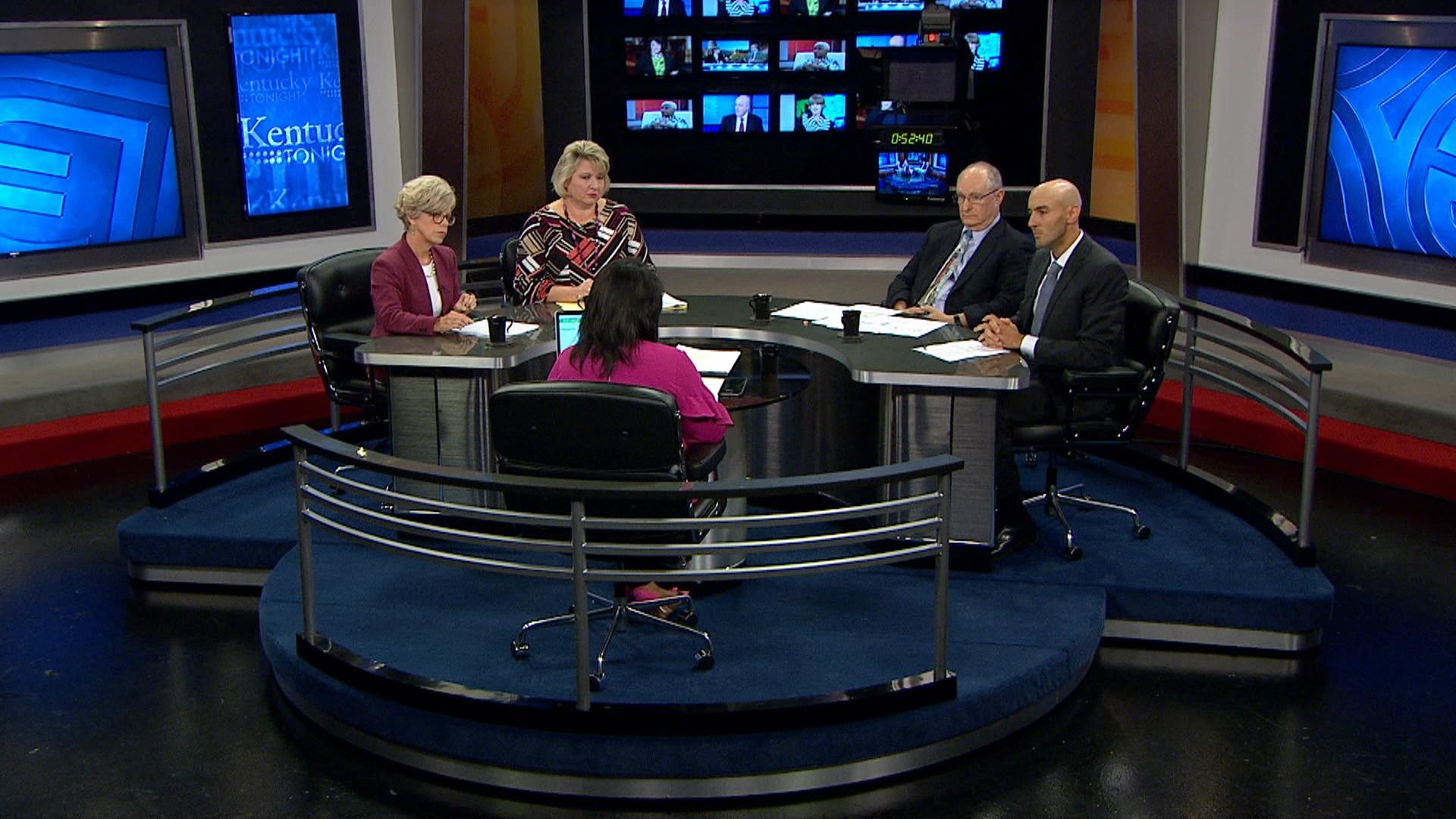