Final Predictions on the 2019 General Election

Ahead of today’s elections, KET’s Kentucky Tonight assembled a panel of political experts to discuss the races and candidates for statewide constitutional office on the ballot this year.

Not surprisingly, the Republicans say incumbent Gov. Matt Bevin will win a second term and the Democrats say challenger Andy Beshear, the current attorney general, will emerge the victor in the gubernatorial contest.

“I think [Beshear]’s going to win because people want to protect the health care gains that we’ve made under a Democratic administration before [Bevin],” says Ward.

The governor’s temperament is also an issue in the race, according to Matt Erwin. He contends Bevin has alienated a range of Kentuckians with his comments.

“It goes beyond teachers and it goes beyond public employees,” says Erwin. “Folks are really tired of the disrespect they’ve been seeing from the governor’s mansion.”

At the same time though, Bevin has several big trump cards to play, one of which is Donald Trump. The businessman-turned-president won Kentucky by 30 percentage points in 2016 and remains highly popular in the commonwealth. Bevin is an ardent supporter of the president and his policies, and Trump returned the favor by stumping for the governor at a rally last night in Lexington.

Julia Bright Crigler says nationalizing the race benefits Bevin. Yet Beshear could still win if he can convince enough Trump supporters who dislike Bevin to cast cross-over votes. But Crigler says that won’t be easy for Beshear to accomplish.

“I think he has a hard case to make,” says Crigler, “whereas Matt Bevin is clearly a friend of this administration.”

Bevin’s other trump card is a thriving state economy that now boasts historically low unemployment and record levels of workforce participation and business investment. Trey Grayson says those factors give Bevin a significant edge in a state that already leans heavily Republican.

The governor also benefits from a lackluster challenger, says Grayson.

“Andy Beshear is not strong enough to capitalize on the opportunity that he was handed,” he says.

As for the lieutenant governor candidates, Grayson says he doesn’t expect Republican Ralph Alvarado or Democrat Jacqueline Coleman to play much of a factor in how people vote. He also downplays any backlash from Bevin’s decision to dump Tea Party favorite and current Lt. Gov. Jenean Hampton from the Republican ticket.

But Erwin believes Coleman could make a difference for Democrats. He describes Beshear’s running mate as the most talented and energetic politician on the two tickets.

About 30% of registered voters are expected to turn out this Election Day, and the panelists say victory will hinge on where that turnout occurs.

Grayson says he’ll be watching his native northern Kentucky, where Republicans generally dominate. But he also notes that Andy Beshear’s father, former Gov. Steve Beshear, handily won the region in 2007 and 2011. There’s also a concern that President Trump may be falling out of favor with some suburban Republicans.

Ward says he’s curious to see how eastern Kentucky votes. Neither Bevin nor Beshear did well in the region during the May primaries. Republican state Rep. Robert Goforth won a number of eastern and southeastern Kentucky counties against Bevin. Democratic state Rep. Rocky Adkins took nearly all of the counties east of Intestate 75 in his primary battle against Beshear.

Crigler has her eyes on the other end of the state. Western Kentucky was once a Democratic stronghold, but has gone strongly Republican in recent years. She expects that region to be a real battleground, especially for Beshear who has family roots there.

Erwin says he’s watching suburban eastern Jefferson County, another traditional Republican stronghold. That is, until last year, according to Erwin.

“In [2018] we saw this Republican wall crumble,” he says. “Two state House seats flipped [and] you almost had a Republican state senator lose.”

Another factor is early voting. Absentee ballots are up statewide, according to Grayson. Ward says Jefferson County has seen an 80% increase in the people voting early, with almost double the number of absentee ballots returned.

Surrogates and Other Campaign Strategies

Bevin has had the benefit of several high-profile surrogates stumping for him, including President Trump, Vice President Mike Pence, and U.S. Department of Housing and Urban Development Secretary Ben Carson.

“I actually think it shows a weakness among the Bevin campaign that they’ve been so reliant on surrogates to come in for them,” says Erwin.

Last Friday, Pence visited London and Corbin to rally Republican voters to Bevin. Erwin says that’s normally a part of the state where the GOP wouldn’t have to campaign so hard. But Grayson takes a different view of the role that political heavy-hitters can play.

“I think it’s a sign of strength for the Republican Party,” says Grayson. “We can bring in surrogates… Who are the Democratic surrogates?”

Meanwhile some pundits have questioned Beshear’s decision to skip candidate forums hosted by high-profile groups like the Kentucky League of Cities, the Kentucky Association of Counties, and the Kentucky Chamber of Commerce.

“Those are the job creators in Kentucky,” says Crigler. “How can we expect Attorney General Beshear to be a job creator for this state when he’s not even willing to sit down with those very people who are creating jobs?”

Erwin says appearing before those groups can be helpful, but also counters that most people at those events have already selected their preferred candidate. He says Beshear’s team may have decided there were better ways for the Democrat to spend his time on the campaign trail.

“This election is going to be very close,” says Erwin. “It’s going to come down to who shook the most hands, who made it to the most places, who made their case in front of the most voters.”

The Battle for Attorney General

Perhaps the most closely watched down-ballot race is the contest for state attorney general between Republican Daniel Cameron and Democrat Greg Stumbo. Experience has been the key issue in this race: Cameron is a 33-year old political newcomer who is a protégé of U.S. Sen. Mitch McConnell. A recent court case challenged Cameron’s qualification to be attorney general, but a judge ruled the Republican had the requisite years of legal experience mandated in the state Constitution.

Stumbo has actually done the job. He held the office from 2004 to 2008 in addition to being a long-time state representative.

“Greg Stumbo was attorney general, knows more about the laws of Kentucky than most people ever have, and will be able to be an attorney general [from] day one,” says Ward.

But the Democrat’s years in Frankfort have also created a “target-rich” environment for political attacks by Republicans. Grayson says Cameron couldn’t pass up an opportunity to run against someone like Stumbo because of the political baggage he carries.

“A lot of my Democratic friends were frustrated when former Attorney General Stumbo got in because it prevented somebody like a [state Sen.] Morgan McGarvey, or [former state Rep.] Sannie Overly, or another young, talented Democrat to run for that office,” says Grayson.

The race has also pitted two former political foes against each other: President Trump has endorsed Cameron, while former U.S. Secretary of State Hillary Clinton, who ran against Trump in 2016, has endorsed Stumbo.

Endorsements and experience aside, Grayson predicts Cameron will defeat Stumbo by 10 points.

“I think they both would do a good job in the office,” says Grayson. “Mike’s got all this election experience in the campaign finance world… Heather’s shown bipartisan bona fides. She worked in the veterans administration for both Gov. Beshear and then stayed with Gov. Bevin.”

Erwin says Henry could be the one Democrat for whom Republicans would be willing to cast a cross-over vote. He says Henry has been such a good ambassador for the state that her opponents have resisted trying to tarnish her. (Henry’s husband, former Lt. Gov. Steve Henry, faced several investigations during his time in office.)

“It’s been a quieter race than I expected it to be,” says Erwin. “Because she is such a prominent figure in the state, I expected the knives to be out for her a little bit more.”

Other Races on the Ballot

The rebirth of the hemp industry in Kentucky has brought increased visibility to the office of agriculture commissioner, says Grayson. That race features incumbent Republican Ryan Quarles against Democratic challenger Robert Haley Conway.

Ward says Conway’s fate rests with the rest of the Democratic ticket. Grayson says Quarles is a “slam dunk” for a victory.

A strong Democratic showing could also help Sheri Donahue in her challenge to incumbent state Auditor Mike Harmon. Grayson says even though Harmon, a Republican, has had the job for four years, he still doesn’t have much name recognition around the commonwealth.

Erwin says Donahue, who has been an auditor and cybersecurity professional in the public and private sectors, nearly defeated state Sen. Julie Raque Adams (R-Louisville) last year. He says this could be another race where the eastern Jefferson County vote proves crucial.

The race for Kentucky treasurer pits incumbent Republican Allison Ball against Democrat and Louisville banker Michael Bowman. Grayson says Ball has worked aggressively to raise her profile around the state and is considered an up-and-comer in the GOP. If elected, Bowman would be the first openly gay constitutional officer in Kentucky, says Grayson.

In addition to the statewide offices, voters in some communities will be able to cast ballots in additional special elections. 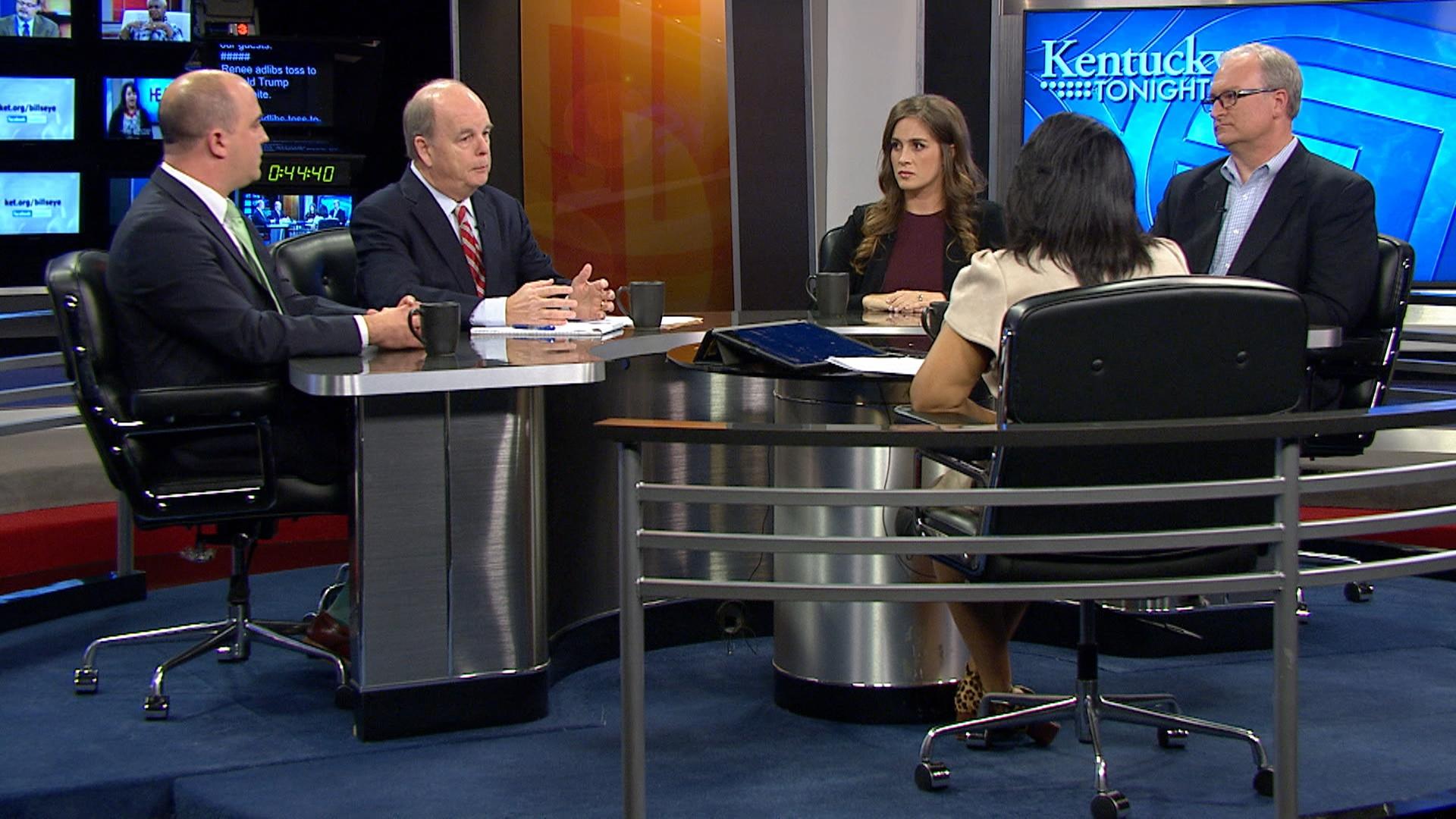