It’s no easy task dividing up $22 billion among all the functions and services of state government, especially when much of that amount is consumed by pension obligations and funding for public education and Medicaid.

The Kentucky House of Representatives and Senate have developed their own spending plans for the next biennium. Now a Free Conference Committee of lawmakers from both parties and both chambers is sorting through the differences between the two proposals in hopes a finalizing of a new state budget this week.

After two days of negotiations by the Free Conference Committee, Rudy says seven to 10 key differences between the House and Senate plans still need to be resolved, ranging from specifics on education funding to the distribution of pension moneys to whether lawmakers will seek any new revenues.

“We’re proceeding along quite well,” says Rudy. “We’ve got a lot of work ahead of us but I think that we can get this done and we still are ahead of schedule.”

Both chambers restore school transportation funding to current levels, and the House increases funding for school Family Resource and Youth Services Centers (FRYSCS), but the Senate does not.

Even with the SEEK increase proposed by the House, Democrats say education funding hasn’t kept up with inflation. They also oppose cuts to supplemental school programs at a time when record numbers of students are dealing with family challenges due to the opioid crisis.

“It’s just crucial that we maintain those programs like FRYSCS, which is really the front line of identification and intervention… to make sure these children have basic necessities and know what’s going on at home,” says Webb.

Also at issue is money for charter schools, which can be formed once the state Board of Education finalizes regulations to govern the schools. The House provides no funding for charters, but the Senate spending plan includes language that would allow a portion of SEEK money to follow a pupil who leaves a traditional school for a charter school. McDaniel says that’s very different from providing direct support for the alternative schools.

“We’re a long ways off from any potential funding going to charters,” McDaniel says, “and there’s not one dime in this budget that is allocated to charter schools.”

But Rand fears every school district could be hurt by the Senate’s charter language.

“There’s only so large a pie and so many ways you can slice it, says Rand. “It’s just like creating another school system… and that money is going to be shifted there.”

Senate Plan Takes a Harder Line on Higher Education
The House exempts state colleges and universities from the 6.25 percent across-the-board spending cuts proposed by Gov. Bevin. The Senate keeps that reduction in place for universities, but McDaniel says the savings will be plowed back into higher education. He says the Senate budget allocates money to equalize funding for Northern Kentucky University and Western Kentucky University.

The Senate plan also sets aside $23 million for schools that meet certain performance criteria. McDaniel says such outcomes-based funding is the most fair and equitable way to move the state’s higher education system into the 21st century.

State universities have already endured multiple rounds of steep cuts that have resulted in higher tuitions for students and layoffs among staff and faculty.

“Most of our universities have already done that,” Webb says. “There’s just not much chicken left on that bone for a lot of them and it’s going to be tough.”

WKU recently announced it would eliminate 119 faculty positions, and Eastern Kentucky University plans to slash 200 positions. McDaniel says any job loss is painful, but he says universities can no longer afford to support academic programs than yield only a handful of graduates.

The Senate proposal also includes language that would give university presidents and boards of trustees more flexibility to remove tenured faculty when budget constraints force a reduction in academic programs offered by a school. Webb says she fears that could tilt the balance of power to governors who have the authority to appoint university board members.

Pension Issues
Like Gov. Bevin’s proposal, the House and Senate plans both put $3.3 billion toward the pension systems for teachers and public employees. But the Senate proposal calls for taking almost half of the more than $2 billion the governor allocated for the Kentucky Teachers’ Retirement System (KTRS) and devoting that money to the state police retirement program and the pension plan for state employees working non-hazardous jobs.

McDaniel says Senate leaders thought it best to put more money towards the plans with the lowest levels of funding. He says KTRS is 55 percent funded, while the state police plan has 27 percent funding and the Kentucky Employee Retirement System (KERS) non-hazardous is only 13 percent funded.

Democrats applaud the commitment to fully fund the pension plans, but also say the Bevin Administration has exacerbated the crisis by moving towards a system of level-dollar funding for paying down pension obligations and by revising the financial assumptions that govern the retirement systems in a much more conservative direction. Those factors have fueled a steep increase in what employers from the state government down to municipalities and local school districts must pay into the respective retirement systems.

“I would argue we would not be in this budget crisis had it not been for that,” says Rand.

McDaniel counters that the bigger problem is that KERS is the worst funded public pension plan in the nation.

“So to try to conflate that this is some kind of an artificial crisis is simply inaccurate,” says McDaniel. “We are very seriously sitting at one market correction from watching our pension systems begin to default.”

Senate Bill 66 would give local governments, school boards, and quasi-governmental entities facing 50 to 60 percent higher pension costs a phase-in period to ramp up to the new, more expensive obligations. But the measure remains in limbo because McDaniel says it’s linked to Senate Bill 1, the overall pension reform legislation that failed to reach a vote in the full Senate earlier this month. The senator says SB 66 would cost taxpayers nearly $1.3 billion, and the state needs the savings that SB 1 would create to pay that bill.

Without the relief SB 66 would provide, the budgets for local school boards and municipalities would be devastated, says Rand.

So could pension reform be revived in the remaining days of the legislative session?

The House Seeks More Tax Revenues
To restore some of the funding that the Bevin Administration and the Senate plan seek to cut, the House wants to implement a 25-cent tax on prescription opioids, which would be paid by pharmaceutical distributors, and increase the tax on cigarettes by 50 cents.

House leaders estimated those levies could generate about $500 million in new revenues for the commonwealth. But the Senate has rejected that piecemeal approach to taxes. McDaniel credits House leadership for taking a bold first step, but he says the matter requires a broader conversation.

Rudy says he’s very close to completing a comprehensive tax reform measure that he hopes to bring to the budget conference committee members. He contends there’s still time to pass tax reform in this session, but he says it wouldn’t happen by the traditional committee process. He says that wouldn’t be unprecedented.

“They did comprehensive tax reform in Washington in November and December of last year, and it didn’t go through the normal processes either,” says Rudy.

But rushing a tax plan through the General Assembly would deny stakeholders a chance to contribute to the proposal, according to Webb.

“The process does suffer, the institution does suffer, and the commonwealth may suffer if we don’t do it the right way,” she says.

The Republicans say reforms must focus on making Kentucky a more competitive place to do business, both nationally and globally. They also want a modernized tax system that would lower income tax rates and broaden the sales tax base.

“It’s not the most fair and I don’t think it would be the best for Kentucky’s economy moving forward,” says Rand.

If Rudy’s comprehensive tax reform plan fails to gain traction, he says he will push the conference committee to reconsider the House proposals on cigarettes and opioid taxes. He says the budget reconciliation process can’t be completed until lawmakers are certain what revenues will be available to them. And with only a few working days left in the session, time is of the essence.

“Anything that we do when it comes to revenue or appropriations, it is imperative that we get our work done and retain the ability of the General Assembly to override any vetoes,” Rudy says. “I think that is critical.” 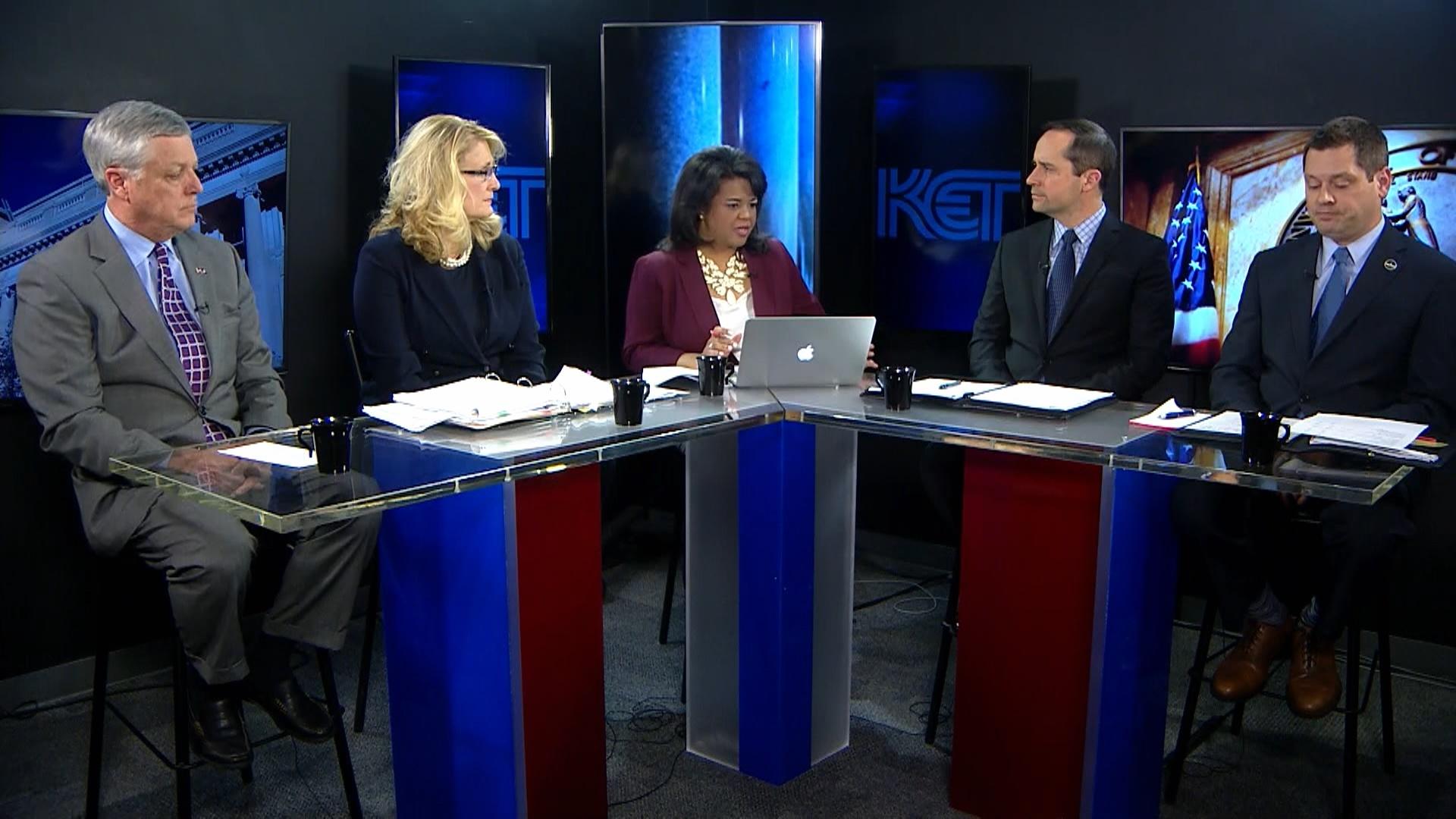