Fate of Many Bills Still Uncertain

At the beginning of the 2015 General Assembly session, there was a near-universal call for legislation to address the state’s heroin epidemic.

Now with only two days left in the session, the fate of that measure and several other critical bills remains uncertain. The legislature is in recess until next week, but lawmakers are working behind the scenes to find compromise on bills relating to heroin, teacher pensions, and road funding. A panel of legislative leaders appeared on Monday’s Kentucky Tonight to discuss the latest developments.

Some Lawmakers Slow to Embrace Needle Exchange Plan
The Senate passed its heroin bill in early January and the House approved a separate measure in mid-February. Now a conference committee has the task of resolving philosophical differences on sentencing and needle exchange provisions that have so far blocked final passage of a measure.

The House heroin legislation would let local communities decide if they want to create needle-exchange programs, which allow addicts to trade dirty needles they used to inject heroin for clean needles. House Judiciary Chairman John Tilley (D-Hopkinsville) says research shows addicts that participate in needle-exchange programs are five times more likely to get treatment, and that the exchanges slow the spread of blood-borne illnesses like HIV and Hepatitis C.

Rep. Jeff Hoover (R-Jamestown), the House minority leader, says his caucus supports the needle-exchange provision because of its potential to help save lives. But Senate Republicans have been slow to embrace the idea.

“I think the perception has been that the needle exchange encourages or promotes the use of heroin and that we’re somehow facilitating that illegal activity by providing the needle,” Hoover says. “But I do think, by and large, folks are now ok with that provision.”

At Odds over Sentencing Provisions
The other sticking point between House and Senate involves punishment for drug dealers. The House plan, as sponsored by Tilley, creates a three-tiered sentencing structure whereby those who peddle small quantities of heroin to support their own habit receive lighter sentences than commercial dealers who move large amounts of the drug. The Senate legislation proposes stiffer penalties for dealers regardless of the quantity of heroin they sell.

“If you increase penalties,” Tilley said, quoting research on the matter, “that does nothing to curb drug addiction or help decrease crime or drug-related crime. That’s why the House supported a bill that had an increase in penalties only for the most commercial-level dealers.”

But there’s hope that the different approaches to sentencing and needle exchange programs may actually lead to compromise in the final legislation. “I know that the Republican majority leader [in the Senate] has said that they would go along with the exchanges if the House would go along with the penalty provisions,” said Senate Minority Floor Leader Ray Jones (D-Pikeville).

Both Jones and Senate Majority Whip Jimmy Higdon (R-Lebanon) say they’re confident an agreement can be reached before next Tuesday’s deadline. Higdon says a conference committee on the legislation will meet this week.

KTRS Unfunded Liabilities
With the Kentucky Teachers’ Retirement System facing $14 billion in unfunded liabilities, the House approved a massive bonding measure to help shore-up the system. Senators rejected that plan in favor of creating a task force to review KTRS and its management.

Democrats Jones and Tilley say they’re not opposed to examining the pension system but they argue KTRS still needs an infusion of cash now. They contend the longer lawmakers wait to address the funding gap, the more it will ultimately cost taxpayers.

Hoover says Republicans oppose the $3.3 billion in new bonds because of the high debt the state already carries. He also says the bonding would only move the teacher pension system from 54 percent of full funding to about 63 percent. Higdon adds another concern, saying that the bonding plan would only prop-up KTRS for the next eight years.

In addition to the House bonding plan and the Senate review panel idea, Higdon says the conference committee assigned to the matter will also consider proposals for smaller bonding issues. One would be for $520 million to cover the actuarially required contribution to KTRS next year. Another option is a $1.9 billion bond issue, which is the amount that should’ve been contributed to the system over the last eight years.

How to Fill Potholes and Road Fund Holes
Higdon says another conference committee could tackle the issue of dwindling gas tax revenues. That tax is tied to the wholesale price of gasoline, which has dropped dramatically over the past year. A 5-cent decrease in the state gas tax is set to take effect on April 1, which Higdon says will result in $150 million less for the state road fund to pay for construction and maintenance projects.

Hoover says House Republicans have proposed reducing that 5-cent drop to 2.5 cents. That would give consumers some benefit from lower gas prices, and the state would still have some money for roadwork.

Even as local officials clamor for more road fund money, plans to reduce or halt further reductions in the gasoline tax have met with opposition. Sen. Jones says conservative groups like Americans for Prosperity have lobbied against such measures, which they deem as a tax increase.

Other Bills Waiting in the Wings
House Bill 8 to create interpersonal protective orders for those in dating relationships awaits a final Senate vote. Rep. Tilley, who sponsored the measure, says he agrees with language changes made by Senate President Robert Stivers (R-Manchester). Sen. Higdon says the bill is scheduled for a vote on Monday, and he expect it to pass the chamber.

Despite bipartisan support, legislation for a statewide smoking ban that cleared the House stalled in a Senate committee. Sen. Jones says it is ironic that the Senate approved $132 million in bonds for a cancer research center at the University of Kentucky, but wouldn’t even consider a bill that would target the leading cause of cancer deaths in the commonwealth.

Higdon says he supports smoking bans, but believes they should be enacted at the local level.

“If you’re smoking, please quit. It is detrimental to your health. And if you don’t smoke, please don’t start,” he said. “But I believe [bans] are a local issue and a third of the commonwealth’s citizens are now covered under no-smoking bans.”

Jones responds that everyone has a right to breathe clean air, but no one has a right to pollute that air. He says if two-thirds of Kentuckians aren’t protected by local smoking restrictions, then it’s the responsibility of legislators to enact a statewide ban.

Another bipartisan measure that cleared the House but died in the Senate is the local-option sales tax measure. Higdon says House Bill 1 simply didn’t have the votes to pass the upper chamber, especially after lawmakers heard from business owners concerned how the temporary, 1-cent tax hike could increase their utility bills. 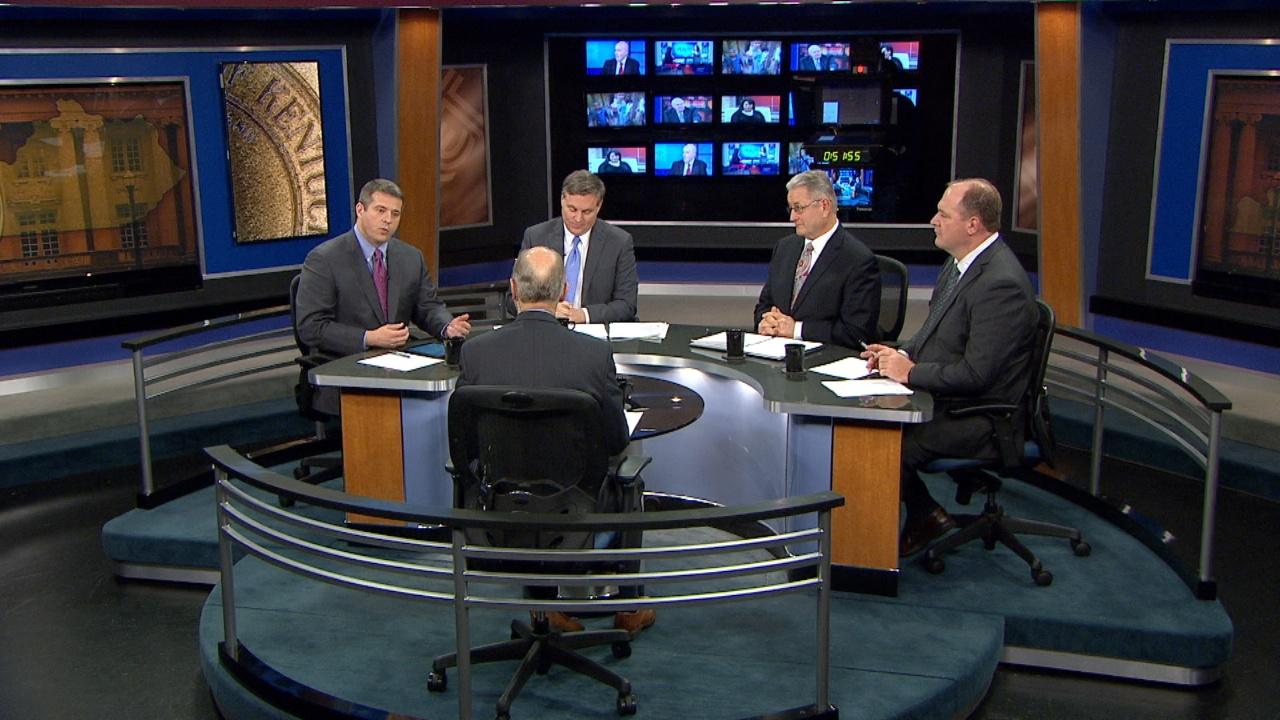