With every hubcap-gobbling pothole and uneven bridge joint we driver over, Kentuckians are reminded of the sorry condition of the commonwealth’s infrastructure. A recent report from the American Society of Civil Engineers (ASCE) confirms what we already know. The organization rated the state’s roads and highways at D+. Our bridges are only slightly better at C-.

The problem goes beyond roads and bridges, though. The engineers graded Kentucky’s airports at C+, wastewater treatment plants at C-, and dams and levees at D+.

The overall rating for all of the state’s infrastructure: a C-, according to ASCE.

What’s At Stake
Although the state’s roads and bridges aren’t in immediate danger of collapse, Kentucky’s aging infrastructure and a lack of new construction does have consequences.

“It’s important for jobs, the economy, for economic development,” say Ashli Watts of the state Chamber of Commerce. “The top factor for companies considering new investment in Kentucky is highway accessibility.”

Safe drinking water supplies and sewage treatment are also critical concerns for citizens around the commonwealth. The ongoing crisis with the Martin County Water District that has left customers with brown, foul-smelling tap water or no water at all is just one example of the problem.

The Kentucky League of Cities’ J.D. Chaney says more than 80 percent of the state’s municipal water systems are over 39 years old and behind on maintenance. He says wastewater treatment is not much better, according to the Division of Water (DOW) in the state Energy and Environment Cabinet.

But whether it’s money for road and street repairs, or water and sewer upgrades, Chaney says cities around the commonwealth are struggling. He says city government expenditures have increased 20 percent in the last decade, but state and federal funding to help maintain city streets has decreased 21 percent.

“Cities are sitting in a unique position where they’re constitutionally limited on the amount of revenues they could raise,” says Chaney. “If they’re going to address these infrastructure issues, they’re going to have to look at occupational taxes. That’s a tax on productivity, [and] that’s counter to economic development.”

Gas Tax Revenues
The primary source of state funding for road repairs and new construction is the gasoline tax. For decades, Kentucky had a variable tax rate tied to the wholesale price of gasoline, which caused tax revenues to vary widely.

To keep the state Road Fund receipts from falling too much as gas prices dropped in recent years, the 2015 Kentucky General Assembly enacted a floor in the gas tax, saying it could not drop below 26 cents per gallon no matter how cheap gas might become.

But with more fuel-efficient cars, and people driving less, gas tax receipts have continued to struggle. Even with the booming economy, those revenues have yet to return to the high of $825 million collected in 2014.

“We’ve been losing on average of $200 million per year,” says transportation advocate Leslie Combs, a former state representative who served as vice chair of the House Transportation Committee.

She says lawmakers should’ve frozen the gas tax sooner to keep it from dropping any farther than it did. She says she understands how difficult votes like that can be, but she says the result was fewer dollars for state roads and highways.

(Road Fund receipts have been on an uptick in recent months. State Budget Director John Chilton reported the fund saw an 8 percent jump in receipts during April, and a 6.1 percent increase in May.)

Another funding issue for the coming budget biennium is that Kentucky expects to run out of federal toll credits in 2021. Instead of using toll revenues collected on state parkways and bridges to count towards a federal matching requirement, the state will now have to come up with an additional $120 million in matching money for federal road projects. Combs says those credits also help fund public transit in the commonwealth, including bus systems in Louisville, Lexington and northern Kentucky.

The Prospect for Higher Gas Taxes
In the past two General Assembly sessions, lawmakers have proposed increasing the gas tax by 10 cents a gallon, doubling registration fees for passenger vehicles and motorcycles, and instituting a new fees for electric and hybrid fuel vehicles.

Those changes would have generated an extra $433 million for the Road Fund each year, according to estimates. But the measures failed to gain passage.

Looking to the 2020 legislative session, Watts and Combs say they hope lawmakers will consider a gas tax increase larger than just 10 cents a gallon.

“Those numbers would get us to a place where maybe we could maintain our current infrastructure, but really it doesn’t give us any additional revenue to create more infrastructure,” says Watts. “We need to be bold… We need to invest in Kentucky and make sure that we have the proper infrastructure to continue the growth that we’ve had the last couple of years.”

If lawmakers are going to consider a gas tax increase, Combs says they should approve one big increase, rather than try to enact multiple smaller increases over several years.

“I think we need to have no less than 20 cents,” says Combs.

That would make the state gas tax 46 cents a gallon, which would add nearly $7 to the bill for a 15-gallon fill-up. To make matters worse, some policymakers in Washington are considering a 25-cent per gallon increase to the federal gas tax.

That would be a serious financial blow to single moms, students, and senior citizens on fixed incomes, says Andrew McNeill of Americans for Prosperity-Kentucky. He says his organization supports a move to more consumption-based taxes, but he says they should be made as low as possible. He argues that a 20-cent increase in the state gas tax would generate $600-$700 million in new revenues for the state, when lawmakers really only need to cover the shortfall coming for the loss of federal toll credits.

“We’re not talking about how do we fix this $120 million hole,” says McNeill. “We’re talking higher taxes that fuels spending in a Road Fund program that is broken.”

A System in Need of Reform
McNeill contends the Road Fund, which he says was developed in the 1940s, needs reform in several areas. The first area is the contract procurement process.

“I think that it’s one of the worst kept secrets… that Road Fund and road construction bidding in the state of Kentucky is a rigged game,” says McNeill.

He cites University of Kentucky research that indicates that nearly two-thirds of all road construction contracts issued in the state only have one bidder. He says that’s costing taxpayers millions of dollars.

Contracts with multiple bidders generally occur in the “golden triangle” region between Louisville, Lexington, and northern Kentucky, according to McNeill. He says the economy of eastern Kentucky is such that there will likely only be one potential contractor to bid on jobs. But he says projects proposed in the rest of the state should have multiple bidders. McNeill contends there may be a “tacit collusion” among contractors in those regions to divide up their service territories in such a way as to give each company a monopoly on road construction work.

Watts says other economic factors are at play.

“It’s really a case of supply and demand,” says Watts. “There may not be the demand in some parts of rural Kentucky for more than one contractor.”

Combs says transportation officials need to process their own contracts because of the complex nature of road construction projects.

“Bidding a road project is a science unto itself,” says Combs. “Probably the people with the expertise to do it are only in the [Transportation] Cabinet.”

McNeill argues that the Road Fund needs other reforms as well. He wants to force railroads to pay the same fuel tax as consumers, make commercial trucks over 44,000 pounds pay the same usage tax as individual drivers, prevent lawmakers from sweeping Road Fund dollars into the General Fund, and close some $800 million in corporate tax expenditures and loopholes that he says exist in the Road Fund. Making these reforms, says McNeill, would fill the looming $120 federal toll credit hole without having to resort to higher gas taxes.

Going Forward
Watts says she thinks these issues are worth reviewing, either through stand-alone legislation dealing with the Road Fund or as part of a comprehensive tax reform package.

“All this should all be evaluated… the hood of the car should be lifted and looked under,” says Watts. But she warns “it gets a little tricky when you put it in an omnibus package instead of a standalone bill.”

As for raising the gas tax, Watts says all other states surrounding Kentucky except Missouri have raised their gas taxes in recent years. If Kentucky wants to keep up with its neighbors, it will have to do the same, she says.

Combs says railroads already contribute their fair share to the state by paying property taxes on track right-of-ways, and by sharing the cost for railroad crossings and related signaling equipment. She also says that the state constitution mandates that Road Fund dollars can only be used for road construction and safety projects.

Chaney says a levy on gasoline tends to be more palatable to citizens because it taxes everyone passing through a community, including tourists, not just the local residents. He says that any new revenues generated by a higher gas tax should be divided evenly between city governments and county governments in the commonwealth. Under the current system, counties get 80 percent of state road funding, while cities only get 20 percent, even though urban roads are used more than rural roads, he says.

However state moneys get allocated, Chaney says a failure to raise the gas tax will have grim consequences for communities around the state.

“If they don’t, Main Street is going to be a dirt road,” he says. 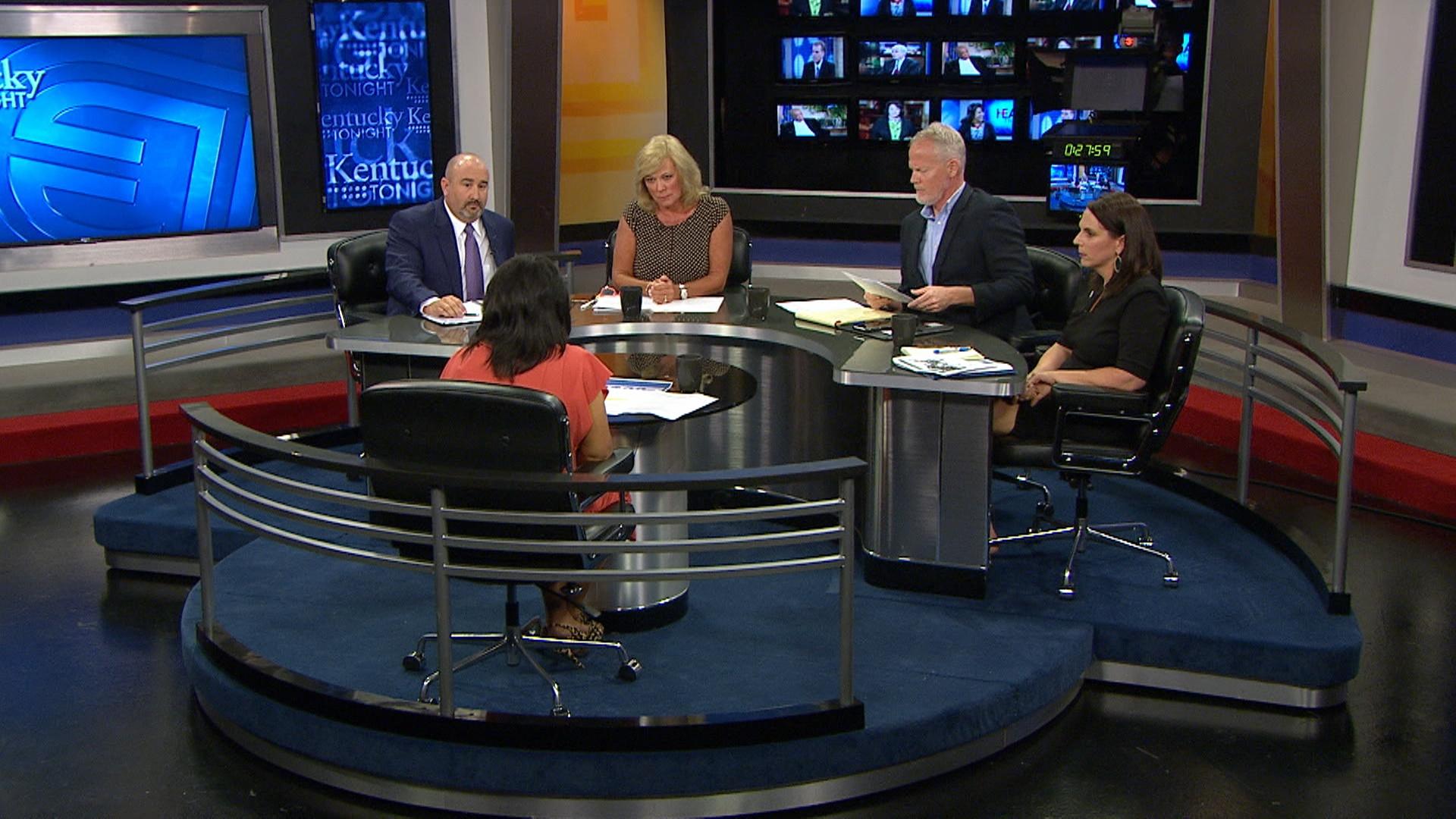