If the informal observations of the state’s legislative leadership are accurate, Kentuckians aren’t paying much attention to this year’s elections.  In fact, the commonwealth’s voters are more focused on the 2016 presidential race than on the gubernatorial election that’s a mere 12 weeks away.

Pensions and Expanded Gaming
As far back as the Fletcher Administration, politicians have worried about the mounting unfunded liabilities in the state pension systems. Stivers credits lawmakers and Gov. Steve Beshear for negotiating reforms to stabilize the Kentucky Employees Retirement System in 2013, and now he says they must address the teacher pension program. He says current and previous politicians of both parties are responsible for the mess.

“This is something that has been foreseen many, many years ago and it wasn’t addressed, but now it’s at critical mass,” the Senate President says. “It’s there, it’s reality, and we’ve got to deal with it, and everybody can take a little bit of blame for it.”

Simply making the actuarially required contributions to the pension plans won’t be enough to eliminate the billions in unfunded liabilities carried by the various systems. So some have called for a dedicated pool of money to shore up the state pension plans. Speaker Stumbo pushed a plan in the last legislative session that would permit a $3.3 billion bonding issue to support the Kentucky Teachers’ Retirement System, but Senate Republicans opposed the idea.

Now, Stumbo is floating a plan for a constitutional amendment that would allow expanded gaming in the commonwealth and dedicate a percentage of the proceeds to the state retirement systems. His proposal would locate one casino in each of Kentucky’s congressional districts. Casinos could only be placed in counties with a population of 55,000 or more, and local voters would have to approve building the gaming facility. Stumbo says revenues would be dedicated to state pensions, education, drug abuse programs, and the Thoroughbred racing industry.

Stivers says he believes dedicated funding isn’t possible, so lawmakers will have to come up with a different source of money for the pensions. He also says he’s heard from colleagues in other states that their gaming revenues have fallen far below projections, which left lawmakers scrambling to recoup the budget money they thought they would have.

“I’m intrigued by the Speaker’s plan, especially the part about local-option expanded gaming,” Hoover says. “Many of us have been arguing that counties should have the right to [have a] local-option [on] right to work. I know the Speaker has opposed that.”

Health Care
There’s no doubt that health care remains a significant issue for politicians and voters in the commonwealth. While thousands of Kentuckians have health insurance for the first time, Frankfort continues to debate questions about the quality and affordability of medical services provided under the Affordable Care Act and the cost of expanded Medicaid coverage.

Stumbo says the reforms will need to be closely scrutinized, especially the larger-than-expected growth in the Medicaid rolls. But without a viable alternative to the ACA, the Speaker contends legislators will have to stay the course with the current system.

“The economy is good in Kentucky right now,” Stumbo says. “We can afford to provide this insurance, we can afford to continue to make sure that Kentuckians have it, we just have to monitor it and make sure we’re doing it efficiently.”

“There are a lot of rural hospitals, particularly in my area and I think in other areas of the state, that are struggling financially now as much or more than any time in many, many years,” Hoover says. He contends those facilities are “constantly having to fight for every service that’s provided with the insurance companies [and] the managed care companies.”

As the spouse of a primary care physician in Pike County, Jones says he hasn’t heard those concerns. But he does worry about what could happen to Kentuckians who finally have access to care and the hospitals that treat them.

“If you do away with Kynect and you rollback the Medicaid expansion, not only are those people going to be hurt, but the local health care providers that are going to have to continue to treat these people if they show up in the emergency room and they don’t have a way to pay for it, then… you’re going to see an increase in charity care.”

Stivers says he recently visited his local hospital to get stitches for his son, and the experience reinforced for him the need to dissuade the newly insured from using emergency rooms as source for primary care. He wants Kentucky lawmakers to consider aspects of the health care model implemented by the state of Indiana, which provides incentives for Medicaid patients to see their family doctor or go to an urgent care clinic rather than going to an ER for non-emergency concerns.

Same-Sex Marriage
Although it doesn’t have the financial implications of health care and public pensions, the debate about religious freedom and same-sex marriage may prove to be no less thorny.

After the U.S. Supreme Court overturned bans against gay marriage in Kentucky and other states, several county clerks in the commonwealth have refused to issue marriage licenses because they profess religious objections to same-sex unions. One of those clerks, Rowan County’s Kim Davis, is appealing a federal judge’s ruling that says clerks must fulfill all the duties of their office.

The lawmakers say there are several possible options for resolving the issue without forcing clerks to do something that violates their personal religious beliefs.  Hoover suggests that the state Department of Vital Statistics should take over issuing and registering marriage licenses. He wants Gov. Beshear to issue a temporary executive order on the matter until the legislature can take up the issue in January.

Stivers agrees that Beshear could address the issue through executive action. At the same time though, both Stivers and Stumbo have suggested a special session to change the marriage licensing process. Stumbo says licenses could be handled similar to land deeds where county clerks don’t issue a deed but simply register the executed transaction. Stivers says there are a number of state statutes that need to be updated to reflect that marriage is no longer solely a union between a man and women. He believes lawmakers could make all the necessary changes in a five-day special session.

Jones opposes calling legislators to Frankfort because he says the matter could easily wait until the regular session convenes in January. He suggests that Stumbo and Stivers first appoint a special committee to review all affected statutes and make recommendations about what must be changed.

But Stivers argues there’s an urgent reason why lawmakers shouldn’t wait until next year.

“I do believe there’s a sense of immediacy because [Rowan County Clerk Davis] is looking at a federal contempt charge and being placed in custody potentially and [receiving] significant fines by either a federal judge or the Sixth Circuit Court of Appeals,” Stivers warns.

A Few Odds and Ends
On tolling roads and bridges, Stumbo says people will have to put their “big boy pants on” and realize that the state can’t afford major transportation projects like a new northern Kentucky bridge without collecting tolls.

Stumbo also renewed his call to move the statue of Confederate President Jefferson Davis from the Capitol Rotunda to a history museum. He says capitols are places for justice and equality, and museums are where people learn the lessons of history. Stivers says he’s been fascinated by the diversity of opinions he’s heard about the fate of the statue and how adamantly people feel about the issue.

And the lawmakers are concerned at the prospects of a low voter turnout for this year’s elections. Stumbo wants to institute an early voting period of up to four weeks before election, which he says would make it more convenient for people to cast their ballots. Stivers says that raises concerns about the integrity of the voting process. The Senate President prefers to boost voter interest and participation by moving elections for statewide constitutional offices to coincide with presidential election years.

But Jones contends voter turnout isn’t a function of scheduling so much as it is the tenor of political campaigns today.

“Kentuckians typically don’t thrive on negativity,” Jones says. “We are a progressive people, we’re hard-working people, and I think that a lot of our good church-going folks are turned off by the constant negativity on both sides.” 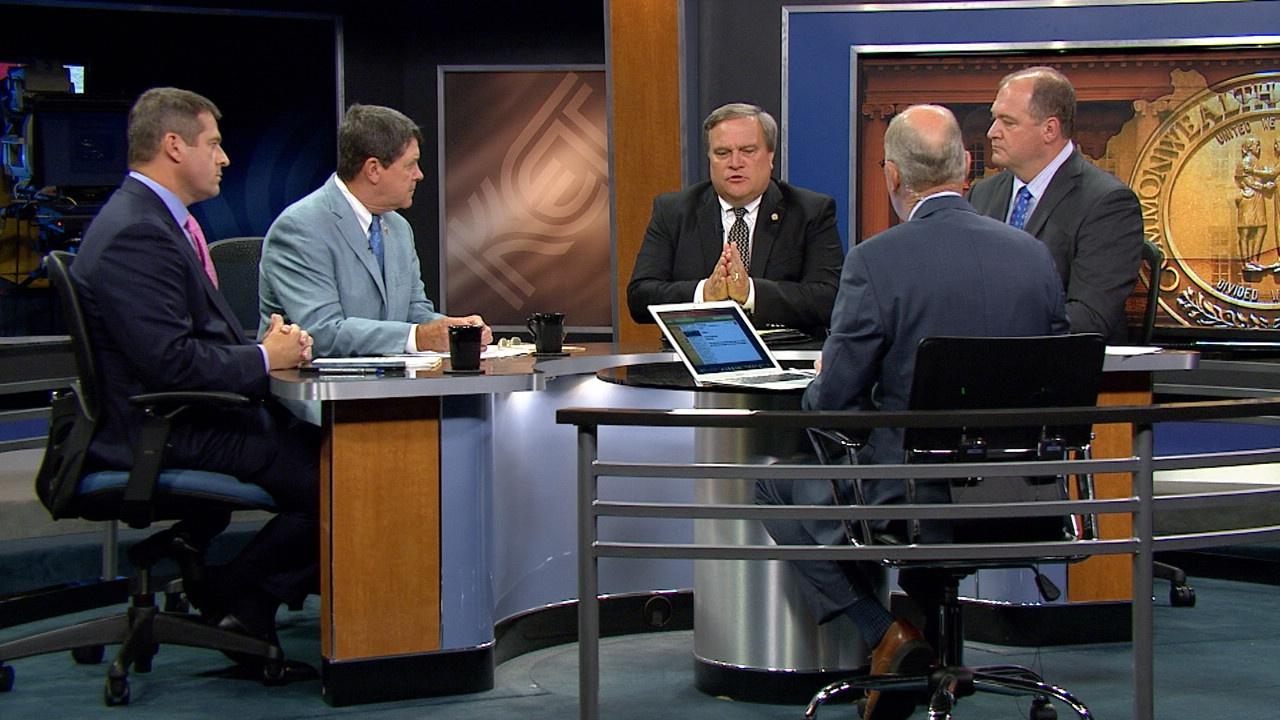