With such massive and thorny issues as pension reform, a possible push for tax reform, and a constitutional mandate to produce a new state budget, Kentucky lawmakers say they can afford no impediments to their work during the 2018 General Assembly

But legislators did face a major distraction during the first week of the session with an unfolding drama in the House of Representatives: Would Speaker Jeff Hoover (R-Jamestown) actually resign his (Speaker) post, as he said he would following revelations last fall that he was part of a secret sexual harassment settlement agreement?

After days of uncertainty, Hoover formally stepped down on Monday. House members accepted Hoover’s resignation with no objections and no formal vote.

“I respect Speaker Hoover’s decision to do what he did today,” says House Speaker Pro Tem David Osborne, a Republican from Prospect. “This is an incredibly difficult time, personally and professionally. Jeff Hoover is a friend and he is somebody that so many of us have incredible respect for.”

Osborne says he will remain as Speaker Pro Tem and preside over the House in the absence of a Speaker. He says there are no plans as of now to elect a new Speaker. In the meantime he says the House GOP caucus is “100 percent united about doing the business of the state.”

Reaction to Hoover’s Resignation
As dramatic as the Hoover’s resignation was, the other leaders agree that it will help both chambers move forward with the business at hand.

“It has been a very, very tough period, not only for the House, but all the members of the General Assembly,” says Sen. Jones. “With public confidence in our elected officials probably at an all time low at both the national and state level, I think [Hoover] probably made the right decision.”

After two decades in Frankfort, Sen. Stivers says he knows all of his fellow legislators. “No one here wanted to see this take place,” he says, but then adds that the resignation was appropriate.

Rep. Adkins says his caucus will review Mason’s Manual of Legislative Procedure, the parliamentary guidebook that Kentucky and other state legislatures use, to see how to address the vacancy of a Speaker. The Democrat says stable leadership is crucial to having a productive legislative session.

“[The resignation] was the right decision for the operation of the House to be able to function in a proper manner without any sort of cloud hanging over,” says Adkins.

Moving Forward With Pension Reform
The two priorities for the lawmakers this year are to create a new two-year state budget and pass reforms to address the billions of dollars in unfunded liabilities in the public employee and teacher pension systems.

Gov. Matt Bevin wanted to call a special legislative session on pension reform last year, but opposition to the reform bill his administration unveiled in October proved too fierce to proceed. Critics questioned provisions that eliminated pensions for most new hires and replaced it with a 401(k)-type retirement plan. The also opposed a mandate that all employees and teachers pay 3 percent of their salaries into retiree health care funds, and a temporary suspension of cost-of-living raises for retired teachers.

Republican leaders have been busily crafting revised legislation ever since. Yet five days into the 60-day session, no new bill has been made public. Those plans haven’t been released yet, says Stivers, because the fiscal scoring of the bills isn’t complete.

Osborne says he hopes to start considering bills “as soon as possible” and he says he remains committed to allowing lawmakers and citizens plenty of time review any reform legislation before it’s brought to a vote.

“We feel like we’ve addressed many of those concerns and that we have a couple of pieces of legislation that will secure the pension systems and put us on the path to solvency,” says Osborne.

Meanwhile House and Senate Democrats are frustrated because they contend they’ve been locked out of the Republican-led talks to develop the reform packages.

“This is too big of an issue for it to be a partisan issue,” says Jones. “We need to come together as a General Assembly to address this.”

Stivers says Republicans have invited feedback from Democrats as well as groups representing teachers, public employees, and retirees throughout the process. He contends that if Democrats are unhappy with the GOP-backed plans, they should propose their own legislation.

“The only proposal I have seen from anybody other than the respective leadership of the two chambers or the executive branch has come from an outside entity [a coalition of educator groups],” Stivers says. “We have a bipartisan, apolitical staff in the [Legislative Research Commission] and if there was something to be drafted… it could’ve been done by any member, Republican, Democrat, House, or Senate.”

Debating the Details
Few specifics about the new reform plans have emerged so far. Senate Majority Floor Leader Damon Thayer (R-Georgetown) told KET last week that the new legislation is a “watered-down” version of the bill offered by the Bevin Administration last fall. He says one change might eliminate the provision that places current employees into a defined-contribution (DC) plan if they decide to work longer than the 27 years of service now required for full retirement.

Several states have tried shifting employees from defined-benefit pension plans to DC plans like a 401(k) or a 401(a). Jones, Adkins, and other Democrats oppose such a switch for new hires or current employees. They contend DC plans don’t offer as secure a retirement as traditional pensions do, will make it harder for the state to attract quality teachers and public employees, and will be more expensive for taxpayers.

“If you go to 401(k) or 401(a) for government employees, you lose the string of money that current employees are paying in,” says Jones, “and you would deplete the retirement system assets that much faster.”

“I think that we’re headed down a dangerous path,” Adkins says. “It doesn’t do anything to help address the unfunded liability… It’s ended up costing more money, and many of those states have come back to some type of a defined benefit.”

Republicans contend the health care pools only have about a fifth of the funding they need to be solvent, and that 3 percent is a small price to pay for guaranteeing that benefit.

“The one thing that’s not protected by the inviolable contract is probably the most valuable thing we could protect and that’s health care,” says Stivers. “Surely you’re not saying cut back on health care?”

Osborne acknowledges that the 3 percent mandatory contribution was unpopular among public employees who have had few if any raises in recent years.

“We’ve heard those objections loud and clear,” says the House Speaker Pro Tem. “There’s some room for compromise on that.”

Finally the Bevin Administration’s original reform plan suspended cost-of-living adjustments for retired teachers for five years. Stivers and Osborne say that’s necessary because the full actuarial cost of that benefit hasn’t been fully funded, which has contributed to the financial imbalance in the Kentucky Teachers’ Retirement System. Adkins says suspending COLAs is a violation of the inviolable contract that details the benefits retirees will receive.

The Debate Over Revenues
Lawmakers allocated $1.2 billion to pensions in the current state budget, and may need to put as much as $1 billion more toward the retirement programs in the new budget they will craft this session. That could force more steep cuts to other government services that were already slashed during the recession years. In his KET interview last week, Thayer said that would put all state funding up for debate, including dollars directed to K-12 education.

Adkins and Jones say the only solution is to generate more revenues for state coffers.

“It’s hard for me to imagine that we can have pension reform without some type of tax reform to help solve the situation, which then we know how much money we’ve got to write a responsible budget that will not cut public education,” says Adkins.

The last major overhaul to state tax codes occurred in 2005 during the administration of Republican Gov. Ernie Fletcher. Osborne says one reason why pension reform talks have stalled since then is because they lacked the proper objective.

“Tax reform that has a goal of raising revenues is a tax increase. That is not tax reform,” says Osborne. “Tax reform is what we need to make Kentucky the most competitive it can be in this region.”

“If we want to compete with Tennessee and other states, we have to make certain strategic investments,” says Jones, “and we don’t have the resources to do that.”

The Democrat adds that any further reductions to K-12 education would be devastating to rural school districts. He says that college tuition increases that have resulted from previous cuts to higher education are essentially a tax on those seeking a degree.

Adkins says the 1990 Kentucky Education Reform Act, which changed how public schools are funded, had a side benefit of fostering a boom in the state’s manufacturing sector because schools were able to graduate better educated, more highly skilled students into the workforce.

“The very things that we’ve talked about – growing the economy, creating a strong economy, educating the workforce – all of that, in my opinion, goes away when you start talking about the cutting of education,” says Adkins. “We’ve got to regain that momentum and education is where you do it.”

In calling for tax reform last year, Gov. Bevin said he wants to shift from a reliance on income taxes to more broadly applied sales taxes. The Republican also called for the repeal of the state’s inventory and inheritance taxes.

Hoover says tax reform is even more complex than pension reform because seemingly simple changes to the tax codes can have far-reaching impacts. He agrees with the push to move towards more consumption taxes and to generate new revenues through economic growth and job creation.

“I’d love to go to a tax that’s based on your buying habits instead of your productivity,” Stivers says. 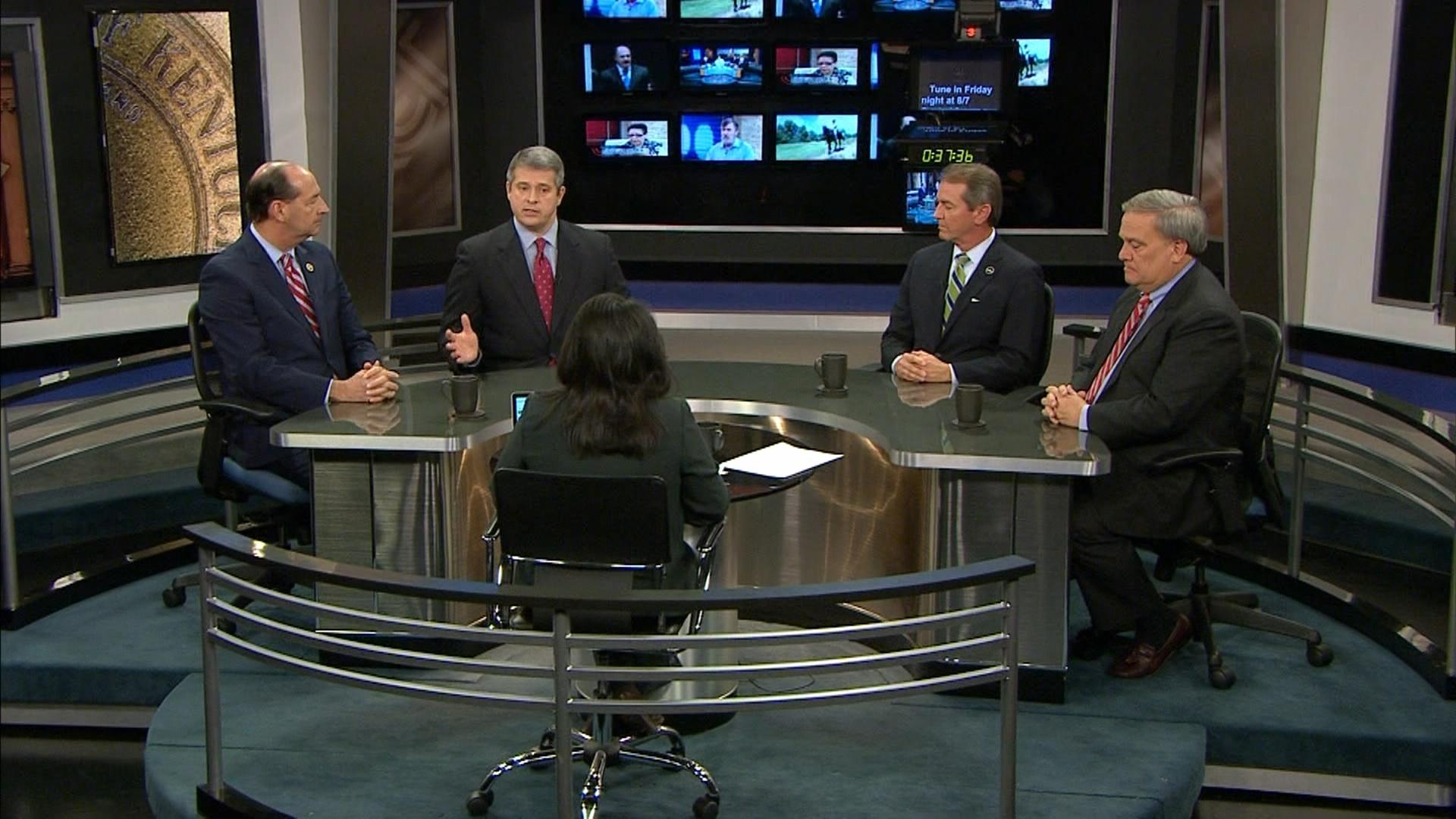