By Wednesday, lawmakers meeting in a special session are expected to approve a bill that gives regional universities, local health departments, and other quasi-governmental agencies a one-year freeze on higher pension obligations as well as options for those entities to either stay in or leave the Kentucky Retirement Systems.

But the path to that final passage has not been without controversy. Democrats have questioned the impacts of House Bill 1 and Gov. Matt Bevin’s call for a special session that summoned legislators to Frankfort.

Starting July 1, the state’s regional universities and quasi-governmental agencies like health departments, rape crisis centers, and domestic violence shelters in the Kentucky Retirement Systems saw their pension contribution rate go from about 49 percent of an employee’s salary to about 84 percent. (The higher rate is the result of updated actuarial assumptions about KRS investment returns and payroll growth.)

Many of those entities feared they would be unable to bear those higher costs. One such agency, Seven Counties Services in Louisville, filed for bankruptcy in 2013 to escape higher pension costs. Other quasis have fired their full-time employees and rehired them as contractors without benefits as a way of reducing their pension obligations.

The dire financial prospects led representatives from these agencies to ask lawmakers for relief. In the 2019 regular session, the General Assembly passed House Bill 358, which froze the pension contribution rate at 49 percent for one year, then required the agencies to decide whether they want to stay in KRS and pay the higher rate or exit the system. Those opting to leave KRS had to pay off their pension obligations in one lump sum, or in installments over 30 years.

Bevin vetoed that measure in April after lawmakers had adjourned. He said HB 358 violated the state’s moral and legal obligations to retirees and would have cost the state more money. His veto message included a pledge to call a special session so lawmakers could pass a new relief package.

Governor’s Call Is Questioned
In early May, Gov. Bevin began circulating his plan to help 118 quasis handle their escalating pension costs. Bevin’s Deputy Chief of Staff Bryan Sunderland says the governor’s office held question and answer sessions with lawmakers and stakeholders to build support for the proposal before amending the plan and presenting the final draft of what would become House Bill 1.

“We took feedback and input from everyone who came to us,” says Sunderland. “This bill has been probably one of the more vetted pieces of legislation out there. That doesn’t mean everyone likes it.”

Then last Thursday, Bevin issued his call for a special session, which listed a dozen items that he said must be included in whatever bill is passed. Democrats and pension advocates argued that Bevin’s call was too restrictive.

“It was uncomfortable as a legislator being dictated to by the governor’s office to do our job as an independent branch [of government],” says Rep. Graviss, who sponsored his own pension relief plan.

Sunderland defends Bevin, saying the state constitution gives governors authority to say what’s in a call to special session. He says a focused call results in a better legislative process.

“The more narrow a call that is made, the more notice the public has whether something that may or may not be considered would be important to them,” says Sunderland.

He says lawmakers still have the freedom to enact or reject what Bevin has proposed. Sunderland also points to a call in 2008 by former Gov. Steve Beshear that included the full text of a 179-page bill lawmakers were to consider in that session.

But that particular bill had been crafted by a bipartisan group of legislators, not by the Beshear Administration, says Rep. Jenkins.

“We had a Republican Senate and a Democratic House… they came together, they agreed on a bill and the call did reference that bill, but didn’t say pass this bill,” says Jenkins. “That’s what we generally see in special sessions, is that the agreements are worked out before, they’re worked out in a bipartisan manner, and that what’s we did not see in this session.”

Attorney General Andy Beshear, the Democrat running for governor against Bevin, said last weekend that he may file suit over the issue. He said Bevin exceeded his authority in calling the session with such specific language, which the attorney general contends encroached on the exclusive lawmaking power of the legislature.

‘A Payment Plan’
HB 1 offers the quasis the option to stay in KRS and pay the higher contribution rate, or leave the system and pay off their obligations at once or over 30 years. The agencies covered under the measure have until April 2020 to decide which path is best for them.

“This isn’t pension reform, this is a payment plan, essentially to keep these entities viable,” says Rep. Miller. “They have options and each option comes with a price tag, and the price tag is set to ensure that KRS is made whole. So it’s not easy, it’s not simple, but it’s a well-balanced, well-reasoned approach.”

Whatever option a quasi chooses, they still have to find the funds to pay their pension bills. Miller says he thinks “at least three regional universities, maybe more,” will draw on cash reserves or bonding to make lump-sum payments to exit KRS. As for local health departments, he says most of them can raise revenues by increasing the tax they assess on residents of their service areas. The state also will continue to provide subsidies to these agencies to help them with their pension payments.

“One of the requirements is that those folks will receive the same allocation that they’ve previously received,” says Sen. McDaniel about the subsidies. “None of the other bills actually addressed that, but this one at least ensures that they stay consistent with where they’re at now.”

Graviss says HB 1 puts too much financial pressure on agencies that provide vital services. He calls the legislation illegal, inhumane, and a “path to destruction.”

“What we don’t want to do is put risk on these quasis who are out there protecting life and limb on the frontlines to our must vulnerable citizens,” says Graviss. “We’re trying to increase their costs when they’re out there serving the least of these. That is not what Kentucky is about.”

The Democrat has several other problems with HB 1. He says the state will be on the hook for as much as $377 million in outstanding pension obligations not paid off in 30 years by agencies that leave KRS. Graviss also says agencies won’t have enough time to review financial analyses of how the various options in HB 1 will impact them before they have to make a decision about which one to choose. Finally, he says HB 1 will result in 15 consecutive years of negative cash flow for KRS.

Alternatives Proposed by Democrats
Another provision in HB 1 requires employees of agencies that exit KRS be placed into a 401k-style retirement plan. They will keep any benefits they’ve already accrued under the state’s defined-benefit pension plan, but going forward they will earn less generous benefits through a new defined-contribution plan. Gravis says that change could cost employees as much as $100,000 in retirement benefits over their working careers.

Graviss and fellow Democratic Rep. Angie Hatton of Whitesburg filed their own bills to address some of issues they see with HB 1. Hatton’s House Bill 3 would have simply frozen the pension contribution rate these agencies currently pay.

House Bill 2, sponsored by Graviss, would allow these agencies to stay in KRS and freeze their 49 percent contribution rate for the next 25 years. To offset those lower payments, Graviss proposes slightly higher contribution rates from other state agencies in KRS. He would also shift money from the retiree health insurance fund to the pension plan.

“That’s true because it takes the onus off of the quasis and puts it on everybody else,” says Miller. “We are pushing cost off on others.”

Graviss admits his bill would cost about $3 billion over 24 years. But he also contends it’s worth it to put what he says amounts to 0.5 percent of the annual state budget to shoring up these public service agencies and maintaining pension benefits for their employees.

McDaniel applauds the work Graviss put into his bill, but the senator says the money diverted from the health insurance fund over the next few years will eventually have to be replaced by taxpayers.

The House State Government Committee voted down HB 2 and HB 3 along party-line votes on Monday.

Bill Advances to Final Passage
Democrats also offered floor amendments to HB 1 to make the legislation more palatable to their interests. One amendment would have removed all the language from the bill except for the one-year freeze on the pension contribution rate. Another amendment would have removed the non-severability clause that Gov. Bevin requested. That means if any part of the legislation is struck down in court the entire bill will be overturned.

House Speaker David Osborne ruled those amendments were out of order because they failed to address the items outlined in the governor’s call into special session.

“I think that gives some credence to the fact that we were only going to be able to pass [Bevin’s] bill without any changes,” says Jenkins.

HB 1 won narrow approval in the House on a 52-46 vote, with nine Republicans joining Democrats to oppose the legislation. Democrats unsuccessfully argued the measure should require 60 votes for passage since it involves spending state money.

The Senate State and Local Government Committee approved HB 1 Tuesday morning, and the full Senate is expected to vote on the legislation on Wednesday. McDaniel predicts passage of a clean bill.

“I think you’ll have a healthy and robust debate,” says McDaniel, “but at the end of the day, these quasi-governmental agencies need this help.”

Beyond any potential legal challenges to HB 1, Democrats say they will continue to work for solutions to the pension challenges faced by the quasi-governmental agencies.

“I hope that in the next session that we can continue these discussions and that we can talk about ways that we can give those important departments some stability and certainty,” says Jenkins. 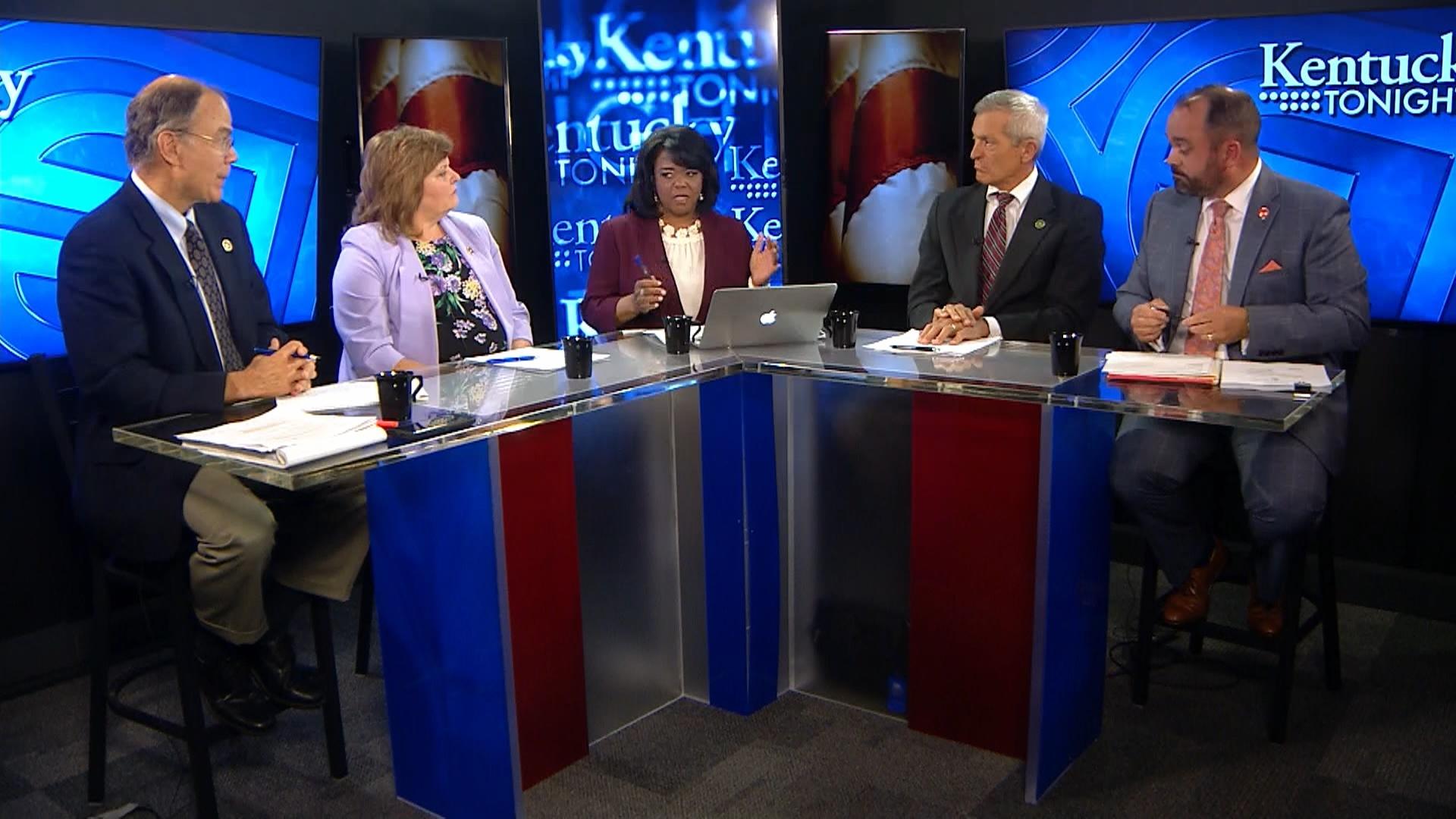