Debating Issues That Will Influence the 2019 General Election

Will the 2019 Kentucky governor’s race be a campaign that explores pension and tax reform, public education, abortion and other policy issues? Or will it be more focused on the personalities of the candidates? And what might the results of this year’s statewide contests tell us about what could happen in the 2020 Congressional and presidential elections?

Trey Watson describes the primary as a “family squabble.” He says most of the people who voted for Goforth in the primary will “hold their nose” and vote for Bevin in November.

On the Democratic side, Beshear drew 38 percent of the vote, while state Rep. Rocky Adkins of Sandy Hook got 32 percent, and former state auditor Adam Edelen got 28 percent.

Jonathan Miller says Democrats will benefit from unity within their party, noting that Adkins and Edelen have pledged to support and campaign for Beshear. Miller says Adkins’ endorsement is critical for Beshear, since he dominated in his native eastern Kentucky and among conservative Democrats.

A Bevin-versus-Beshear contest offers the clearest choice for voters, according to Watson. He says Beshear represents a step backwards to the policies of the Democrat’s father, former Gov. Steve Beshear, who served from 2007 to 2015. Plus, he argues that some conservative Democrats who voted for Adkins will likely vote for Bevin rather than the more liberal Beshear in the fall.

Miller says the Democratic nominee faces an uphill battle running in a red state. But he contends that Republicans fear Beshear as a candidate, otherwise they wouldn’t have launched negative ads against him already. Miller also says Beshear easily weathered attacks Adam Edelen leveled against him during the primary, so Beshear can withstand similar allegations coming from Republicans.

Issues That Drive Turnout
One issue that clearly separates the candidates is abortion. Bevin describes himself strongly pro-life, while Beshear calls himself pro-choice. As Attorney General, Beshear has declined to defend abortion measures enacted by the Republican-controlled legislature that he says are unconstitutional.

The Kentucky General Assembly passed four pro-life measures this spring. Conservative lawmakers in other states have recently passed similar or more stringent measures to restrict to abortions, placing the issue at the center of national attention this year.

Miller says Kentucky is a largely a pro-life state and that Republicans have done an excellent job of using abortion to drive turnout among conservative voters. But with the new crackdown on abortion access occurring in Kentucky and other states, he predicts Democrats will also use the issue to get people to the polls.

“I think you’re going to see energized liberals [and] energized women who haven’t voted before,” Miller says. “There’s not a whole lot of them, but I think that the Bevin-Beshear race is going to be close enough where an energized left could make a one- or two-point difference in the election.”

Watson says abortion is important to many people, but he says the issue is also a convenient way for politicians and political consultants to connect with certain voting blocs.

“It’s easier for Republicans to target conservative voters, whether they’re Republican or Democrat, using abortion as an identifying characteristic,” says Watson. “That doesn’t mean we’re only going to give you pro-life messaging. You’re getting a whole set of messaging that skews social conservative.”

Yet there are other issues that don’t incite the same level as passion among many voters. For example, people list education as a top priority, but Watson says it simply doesn’t “light that fire in voters” when it comes to election turnout. He contends voters want quick gratification, and education issues don’t provide that. Julia Bright Crigler says part of the problem is messaging.

“It’s not an easy issue to pack into a 30-second sound bite,” says Crigler. “But in the context of elections, a lot of people care about sound bites because that might be the only message they hear.”

Sadiqa Reynolds argues that the issue is too important to relegate to sound bites.

“We are not doing well on the education side so we need leaders who are willing to talk about it even when the people are maybe checked out,” says Reynolds. “We cannot compete with the rest of the country if we continue doing what we’ve been doing, so the conversation really does have to be forced.”

The Economy and Health Care
Gov. Bevin is expected to tout record corporate investments, job creation, and low unemployment that have occurred during his time in office and under Republican control of the state legislature.

But Miller argues that economic growth is driven more at the national level. He says the current boom isn’t just the result of President Donald Trump’s policies. He contends it’s a long-term trend that started under former President Barack Obama. Miller also says the bigger economic question for Kentuckians is, who benefits from the recent growth and who is left behind?

“Folks in rural areas and particularly folks in impoverished areas don’t think the priorities are right in Frankfort,” says Miller. “I think that Andy Beshear can make a compelling case that we need a new person in the governor’s mansion.”

Watson says Bevin and Republican legislators can also take credit for tackling the public pension crisis and enacting the first phase of state tax reform, both of which he says Democrats failed to do when they controlled Frankfort. He says the GOP tax strategy is sustainable and will make Kentucky competitive with neighboring states.

“We’re doing it in a slow, thoughtful manner where the state has enough money to operate,” says Watson. “At the end of process, [we’ll] have more money than we have now.”

On the Democratic side, Miller says Andy Beshear should make health care the focus of his campaign platform. Miller says Beshear can highlight his legal battles as Kentucky Attorney General against opioid makers. He can also state his opposition to Bevin’s efforts to scale-back the Medicaid expansion that was enacted by former Gov. Steve Beshear.

Bevin’s Medicaid waiver, along with its proposed work requirements, is also an issue for Reynolds. She says poor people who have lost their jobs shouldn’t be penalized with the prospect of losing their Medicaid coverage.

“There were some major policy problems for a whole lot of people in Kentucky,” Reynolds says. “This is about health care in Kentucky and poor people across this state who need to have their health care.”

Personalities
Kentucky, Louisiana and Mississippi are the only states with gubernatorial races this year. (Incumbent Democrat Gov. John Bel Edwards is seeking re-election in Louisiana, while Republican Gov. Phil Bryant in Mississippi is term-limited and cannot seek another term.)

Some poll-watchers say these races can indicate the national mood heading into the 2020 presidential election. Watson predicts that both parties will look to the Kentucky race for indicators since he says Gov. Bevin and President Trump have similar personalities and styles of governing. He says Republicans and Democrats will try to fashion a political narrative out of whatever happens in Kentucky this November.

Miller describes being governor as a job that directly impacts people’s daily lives. That’s why he says personality will matter as much as the issues in the gubernatorial race. He says for a Democrat to win the Kentucky governor’s office these days, Republicans have to field an unpopular candidate and be divided within their party ranks, both of which he says are happening this year.

That fracture is evident in the recent battle between Bevin and legislative Republicans over a bill to give pension relief to regional universities and quasi-governmental agencies. Earlier this year lawmakers passed a measure that would insulate those entities from higher pension costs for one year in exchange for providing them a way to exit the beleaguered Kentucky Retirement System. But Bevin vetoed the legislation and has been unable to muster enough GOP support for a replacement bill that would need to be passed in a special legislative session.

Then there’s the rift between Bevin and Lt. Gov. Jenean Hampton. Bevin dropped Hampton, who has deep Tea Party ties, from his ticket for re-election in favor of state Sen. Ralph Alvarado (R-Winchester). Hampton has also implicated Bevin’s office in the firing of two of her top aides in recent months.

Watson and Crigler say they doubt those factors will cause Tea Partiers or Republicans in general to drop their support for Bevin and vote for Beshear. But Miller says those issues may cause some Republicans to simply stay home on Election Day, while more passionate Democrats flood the polls.

Other High-Profile Contests
Another race that could draw as much attention and campaign donations is the contest between Democrat Greg Stumbo and Republican Daniel Cameron for state Attorney General. Stumbo is a Frankfort veteran who served as a state representative and House Speaker as well as Attorney General. Cameron is political newcomer who served as legal counsel for U.S. Sen. Mitch McConnell.

Miller, who works in the same law firm as Cameron, calls the Republican sharp, bright, and charismatic. He says Stumbo is an icon of state politics who has a smart political mind. He says neither candidate should be underestimated.

Reynolds says an endorsement by McConnell is not a sure thing for a candidate. She also says that the role of Attorney General can be a crucial check on a governor’s exercise of executive power. She says voters should remember that when it comes time to cast their ballots.

Watson and Crigler say Republicans are thrilled to have Stumbo as an opponent, saying they will make Kentuckians aware of “all the skeletons” in the Democrat’s closet.

In the Secretary of State’s race, Democrat Heather French Henry faces Republican Michael Adams. Henry is a former commissioner of the Kentucky Department of Veterans Affairs, while Adams is an election attorney who previously worked for McConnell as well as former Gov. Ernie Fletcher.

Reynolds calls Henry a “Teflon candidate” who can draw support from both parties. Watson says he fears this is the one race where loyal Republicans may decide to cast a vote for the Democrat on the ballot. But he also notes that Adams is regarded as one of the best election lawyers in the country, while Henry may be tarred by scandals surrounding her husband, Steve Henry, who served as lieutenant governor from 1995 to 2003. 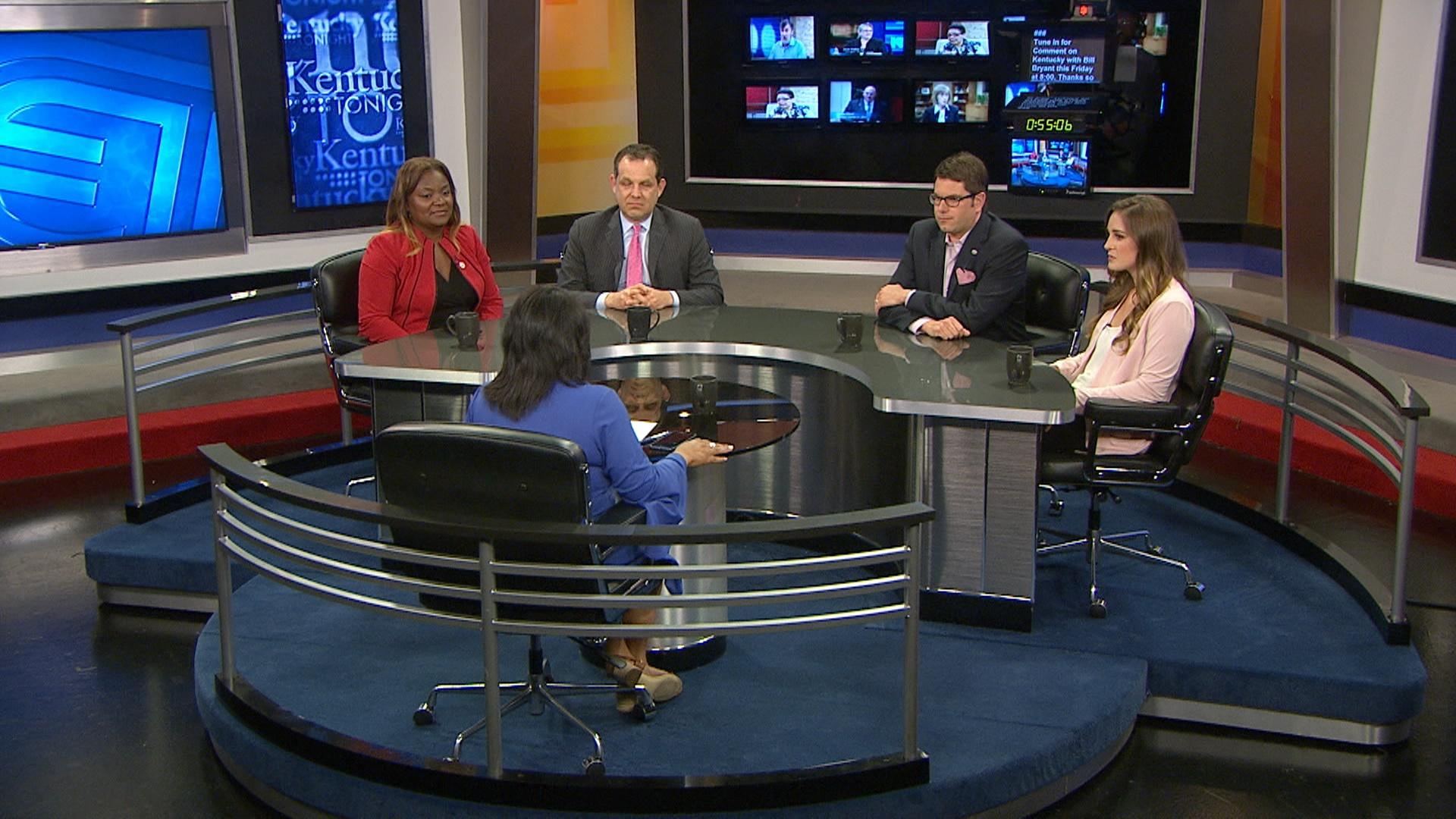