KET’s Kentucky Tonight discussed bills that would impose new limits on gun owners and other measures to allow people to carry their firearms in more places. The panel also discussed measures designed to curtail criminal gang activity in the commonwealth.

The Gun Debate
Last Thursday, the day after the shooting at the Florida high school, lawmakers took to the floor of the Kentucky House of Representatives to share their views on gun violence. Rep. Stan Lee (R-Lexington) said the solution is to place more trust in God rather in man-made laws.

In his remarks to fellow House members, Rep. Will Coursey, a Democrat from Graves County, said he covets his A+ rating from the National Rifle Association. But he questioned why hunters need firearm accessories like high-capacity magazines that contain hundreds of bullets.

“There’s nothing sporting about these gadgets that go on these assault rifles,” Coursey said. “They are not developed to take the life of wild game… They are here to take human life and civilians should not have access to them.”

Debating weaponry misses the point, according to Rep. Benvenuti. He contends the real problem is a breakdown of personal responsibility.

But evoking nostalgia for how things used to be is a double-edged sword, says Rep. Scott.

“At the same time we had the Bible and prayer in schools, we had lynchings. We had water hoses and dogs sicced on human beings by law enforcement,” Scott says. “So it was a very different time in which there was violence, [but] it’s a different kind of violence that we’re talking about today with school shootings.”

The uniquely American devotion to firearms does pose a significant public health problem. Ashley Spalding of the Kentucky Center for Economic Policy says the United States has a gun homicide rate that is 25 times greater than other high-income nations.

The debate over gun safety doesn’t just get bogged down in the philosophical divide between gun-rights advocates and those who seek more gun controls. Josh Crawford of the Pegasus Institute says definitions also muddy the issue. For example, he says the term “assault rifle” means different things to different people.

“You may end up banning weapons that you’re not intending on banning, and leaving more weapons out on the market that are actually more dangerous than the ones you’ve banned,” he says. “The conversation needs to be more in depth than simply ‘assault weapon.’”

New Gun Legislation Proposed in Kentucky
A dozen gun-related bills have been filed for the 2018 Kentucky General Assembly session. Two measures would allow teachers or marshals to carry weapons in schools. Another bill would allow those with concealed-carry licenses to take their guns on state college campuses and into state and local government buildings.

Other measures would enable first-class cities to enact tighter firearm and ammunition regulations than are otherwise allowed under state law, prohibit people convicted of a hate crime from possessing firearms, and make it a misdemeanor to store a firearm where a minor could access the weapon.

“I’ll decide based on the maturity and intelligence of my children how my guns will be stored,” Benvenuti says. “I don’t think the government has any role in that whatsoever… Responsible parenting is what a lot of that comes down to.”

Scott says she stands with the Florida high school students who are calling for tougher gun laws. She supports measures to require people to buy arms only from licensed gun dealers, to prevent people with domestic violence protective orders against them from having guns, and to let Kentucky cities set gun ordinances stricter than state laws. The Democrat also wants limits on sales of semiautomatic weapons and bump-stocks, which can enable a semiautomatic gun to shoot like a fully automatic firearm.

In general, Benvenuti says he opposes any limits on guns. He says the bad actions of some people shouldn’t cause the government to infringe on the constitutional rights of all law-abiding gun owners. But he concedes that people with mental health issues, violent criminal records, arsonists, and child and spouse abusers should not be allowed access to weapons.

More narrowly tailored measures are generally more effective, according to Crawford. He suggests instituting gun-violence restraining orders in which judges, through the course of a civil hearing, could decide if an individual was qualified to have a firearm. Crawford also says Kentucky should implement laws that would make it a crime to purchase a gun using someone else’s identification, and for someone to legally buy a gun but then give it to someone who can’t lawfully purchase one.

“The overwhelming majority of our violence in Kentucky is committed with guns that are acquired illegally,” Crawford says. “Kentucky is a net exporter of firearms that are used around the country illegally and we have to disrupt that pipeline, and those two laws would be a very efficient and I think reasonable way to address that pipeline.”

Spalding endorses legislation that she says can lead to fewer gun-related deaths, such as universal background checks and limits on assault-style weapons. She points to a University of Massachusetts study that showed the federal assault weapons ban that was in place from 1994 to 2004 reduced the number of mass shootings by 37 percent, and individual deaths in gun massacres by 43 percent. When that ban sunsetted, she says mass shootings and gun deaths jumped exponentially.

“Generally where you see stronger gun laws, you see fewer gun violence deaths, and you see fewer police officers being murdered by guns. You see fewer people who are involved in intimate partner violence being shot,” Spalding says. “There are a lot of benefits to strengthening gun laws.”

Bill Seeks to Reduce Gang Violence
Another bill before the state legislature would tighten penalties on those engaged in gang activity in the commonwealth. Benvenuti is the sponsor of House Bill 169, which would update the definition of a criminal gang, make it a Class B felony for adults to recruit minors into gangs, and force gang members convicted of certain crimes to serve 85 percent of their sentences before being eligible for parole. The Republican says gang activity is a problem statewide, and his bill would help protect young Kentuckians from being lured into gangs.

“This is a very sharply tailored bill that is meant to get at the worst of the worst,” Benvenuti says. “It is to get the wolves away from the sheep.”

Lawmakers and state officials have sought ways to reduce the state’s prison population and help offenders reenter society. But with the longer jail sentences outlined in HB 169, Benvenuti says additional corrections costs to the state would total about $19 million.

Scott, who opposes the measure, says that money would be better spent on job training and social supports for young people at risk of joining gangs.

“Instead of looking at ways of incarcerating our young people, we should be looking at ways to make sure that they’re employable, that we’re paying them a living wage… [and] make sure we’re fully funding affordable housing across the commonwealth so that people don’t have to resort to criminal activity in order to have a place to live,” says Scott.

She also fears the legislation and its new definition of a criminal gang would disproportionately affect minority populations.

“We don’t talk about the school-to-prison pipeline and why these young people are in situations to either recruit or be recruited in the first place because black and brown kids are the ones that are being suspended from school and pushed out in the streets,” Scott says. “So this has everything to do with race.”

Benvenuti rejects that assertion, saying that under his bill, the Ku Klux Klan could also be considered a criminal gang.

“We want to send a clear message that if you’re a gang member in Kentucky and you’re going to target our children, then you’re going to suffer a significant consequence,” says Benvenuti. “It doesn’t matter what gang you’re part of, or what color your skin is, or anything else. It’s about your conduct.”

“We don’t talk a lot about what causes people to choose these gangs,” says Spalding. “A lot of it has to do with poverty, and so poverty reduction strategies would really help with this. Locking young people up for incredibly long periods of time, where it’s really hard for them to get back on their feet and reenter society, that’s just not helpful.”

California is not an apt comparison on the gang issue, says Crawford, who worked as a prosecutor in Sacramento.

He says combating gang violence requires prevention efforts targeted at youth, and law enforcement strategies to remove gang recruiters and violent gang members from the streets. He praises the tight focus of Benvenuti’s proposal, which he says sets high standards for prosecutors and will put the worst gang offenders behind bars. 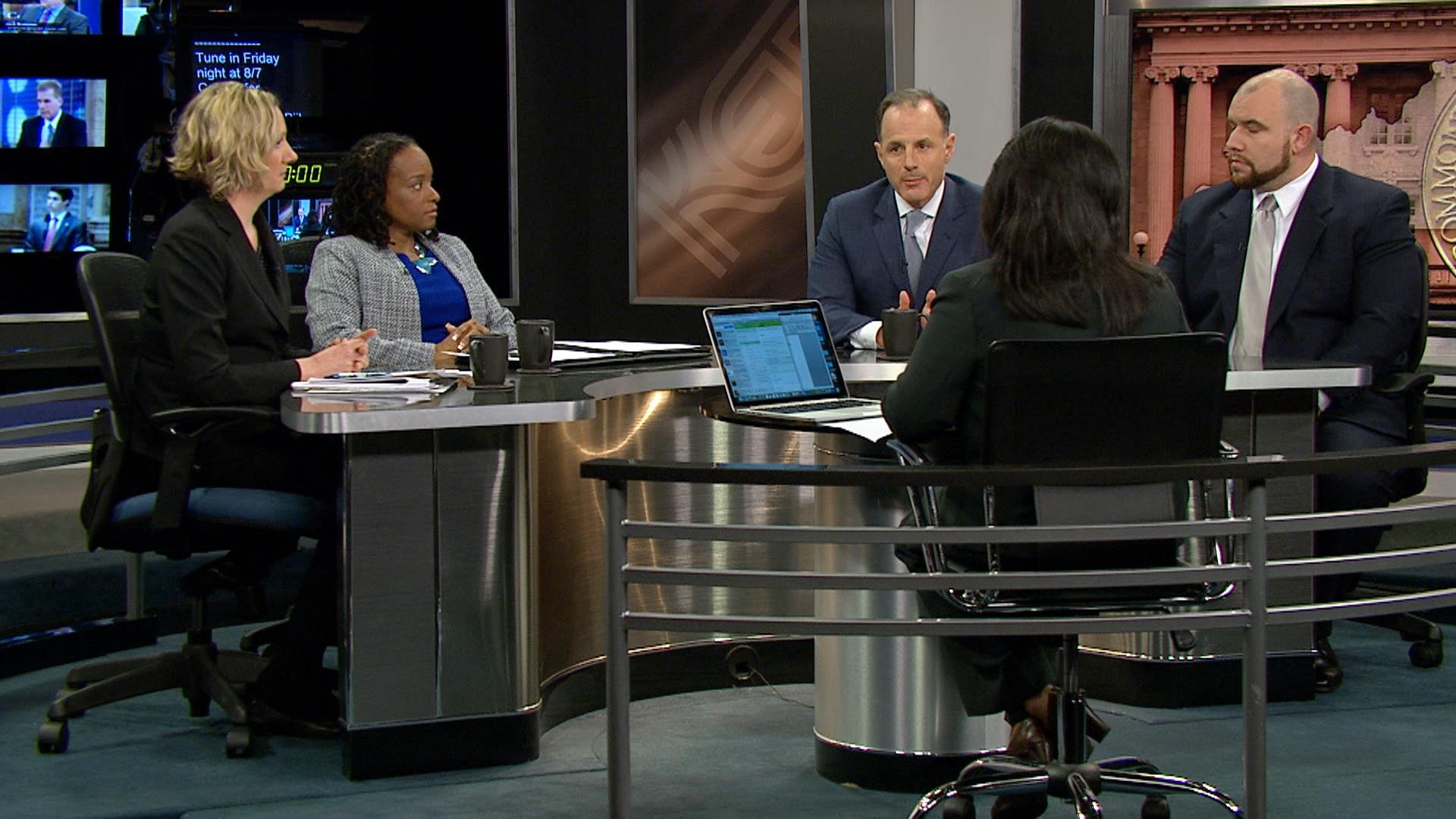