Bill Goodman travels to Washington to speak with Republican Sen. Mitch McConnell, the new leader in the senate, and other members of the Kentucky congressional delegation, including Rep. Hal Rogers and Sen. Rand Paul. They and others discuss the significance of McConnell's new position to Kentucky and the nation.
Length 56:01

Who is Sen. Mitch McConnell? Colleagues and political observers describe him as a consummate professional, a workhorse, a shrewd tactician who knows how to win elections, a patriot of Kentucky, and the most powerful Republican in the world.

In the early days of the 114th Congress, KET’s Bill Goodman traveled to Washington, D.C., to talk with the new Senate Majority Leader about his plans for the Senate and the country. Goodman also interviewed a number of people who have known McConnell for years.

Here’s how the 10 people featured in the program characterize McConnell and the opportunities awaiting him as majority leader.

Sen. Lamar Alexander
The Tennessee Republican says he’s known McConnell since the two were young Congressional aides in Washington. The Senate majority leader in those days was Sen. Mike Mansfield, and Alexander says he and McConnell were impressed with how the Montana Democrat led the chamber in an open and bipartisan manner. Alexander contrasts that style with how he says the Senate was run under Sen. Harry Reid.

“The last few years we’ve had this ridiculous situation where the Democratic leadership has just closed down the Senate and not allowed votes,” Alexander said. “That’s like being elected to the Grand Ole Opry and not being allowed to sing.”

Alexander says McConnell wants to restore openness to the Senate and move the country in a more conservative direction. Alexander contends President Obama could not have a better partner than McConnell to pass legislation on international trade and tax reform, as well as student loans, cyber-security, and updating No Child Left Behind.

Sen. Rand Paul
The junior senator from Kentucky credits McConnell for not holding a grudge against him for beating fellow Republican Trey Grayson in the 2010 Senate race. Grayson, a former Kentucky secretary of state, was McConnell’s hand-picked candidate to succeed former Sen. Jim Bunning who retired that year. Paul says after the hotly contested primary, McConnell quickly embraced him and supported his candidacy.

Paul notes that McConnell has already had a significant impact on the Senate. In one week of the 114th Congress, Paul says the Senate has taken more votes than it did in all of last year. He says he’s eager to work with McConnell to help the coal industry in the commonwealth.

“In many ways we’re a good combination for Kentucky. He has a great deal of power and influence through his leadership role that he has,” Paul said. “I have less of that seniority but I have, maybe, the ability to present a message in a way that can bring more people to the cause and help us to win public opinion.”

Rep. Hal Rogers
“A shrewd tactician” is how Kentucky’s 5th District congressman describes McConnell. He says the two have known each other since the 1960s when they were young Republican activists. Rogers says McConnell’s first political contest, a bid for Jefferson County judge-executive in 1977, was a tough fight.

“No one except his mother gave him a chance,” Rogers joked. “But he pulled it off with aplomb, and that was proof to me that this very, very smart, savvy young guy was going to go places – and he obviously he has.”

Rep. John Yarmuth
Although a Democrat serving Kentucky’s 3rd Congressional District, Yarmuth started his political career as a Republican. A fellow Louisvillian, Yarmuth says he’s known McConnell since 1968 and once considered him an ally. But they since have moved in very different political directions.

“As long as I’ve known Mitch, he has been politically exactly the same person,” Yarmuth said. “He’s been somebody who has no ideology, somebody who is interested in political power, but not with necessarily any end in mind from that power.”

Since, in his view, McConnell is not an ideologue, Yarmuth contends the Senator has an opportunity to be productive. And now that McConnell has reached his ultimate political goal, Yarmuth says the Republican will be focused on shaping his legacy away from being known as an obstructionist.

Former Labor Secretary Elaine Chao
Chao says she first heard about the man who would become her husband when she worked on Ronald Reagan’s 1984 presidential campaign. She says her colleagues were buzzing about a promising young candidate from Kentucky who had a funny political ad with hound dogs.

The two finally met when she was director of the Peace Corps, and were married in 1993. Chao says McConnell warned her that they would spend every weekend in Kentucky, and that every Sunday night, they would have dinner with his mother.

“He’s very ordinary in many ways, in the best sense of the word,” Chao said. “He understands what people in our commonwealth are going through, and he’s constantly fighting for them.”

Gov. Steve Beshear
Beshear met McConnell when they were students at the University of Kentucky College of Law. The two fought a tough senatorial contest in 1996, which McConnell won by nearly 13 points. Beshear says he’s eager to see McConnell extend an olive branch to the White House.

“People are so hungry in this state and in this country for an end to this rancor and obstructionist kind of politics,” Beshear said. “If [McConnell] will make some things happen in various areas, not only will that make him look better and make his party look better, it will be to the benefit of the country and the benefit of Kentucky.”

Kentucky Senate President Robert Stivers
Sen. Stivers (R-Manchester) describes McConnell as extremely disciplined about keeping his emotions in check in the political arena. He notes that McConnell’s role as U.S. Senate majority leader makes him the most powerful Republican in the nation and in the world. And Stivers contends having a Kentuckian in that position elevates the status of the entire commonwealth.

“I think it is something that our state, whether you are a Republican or Democrat but because you’re a Kentuckian, should be proud of – that we have the leader of the United States Senate.”

Political Columnist Al Cross
Cross says McConnell started political life as a moderate Republican, but as his party shifted to the right, so did McConnell. Cross says he expects McConnell, as majority leader, to not only set a new direction for the Senate but also a new tone of conduct for the body. He says McConnell is very business-like and is one of the best students of politics the country has ever had.

“He’s not your typical politician: he’s not much to look at, he doesn’t have much charisma but he knows how to win elections,” Cross said. “He could be a consultant if he wasn’t a senator. He is just very practiced in the art of politics.”

“I’ll be keeping an eye on how he balances the twin objectives of doing business with President Obama and the Democrats to show the country that Republicans are not scary,” Dyche said. “And then on the other hand, setting up some contrasts and distinctions with the Democrats to position [Republicans] well for 2016.”

Louisville Businessman Bill Stone
The former Jefferson County Republican Party chair says McConnell has prepared his whole life to lead the Senate. He says McConnell will plan, sacrifice, and outwork any opponent to be able to meet a goal within ethical bounds.

Stone contends President Obama could create a greater legacy for himself by working with McConnell than he could by working with his fellow Democrats. And ultimately, Stone says McConnell will make all Kentuckians proud.

“He will really go down in the pantheon of great leaders we’ve had in the past,” Stone said. “The Henry Clays, the John Sherman Coopers, the Alben Barkleys, and now the Mitch McConnells.”

Watch full interviews with Sen. McConnell from the Henry Clay Estate in Lexington and from his Capitol Hill office in Washington. 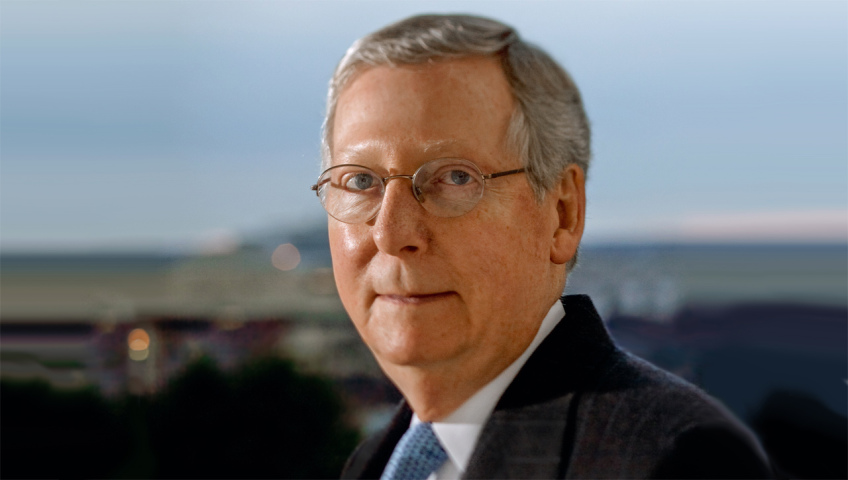