The increase in narcotics addiction throughout the U.S. over the past 20 years is a national crisis, touching nearly every American and causing government officials including the President and Surgeon General to seek solutions. History shows us, however, that narcotics addiction is not a new phenomenon; it has plagued the nation since smuggling of opium became commonplace and morphine became widely used during medical procedures in the 19th century.

During the mid-20th century, groundbreaking efforts to combat addiction took place in Lexington, Kentucky, at a facility initially known as the U.S. Narcotic Farm and later the U.S. Public Health Service Hospital.  Open for nearly 40 years, the facility served as a treatment and rehabilitation center for addicts with the goal of helping them secure a long-term recovery from addiction and sending them back into society as productive citizens.

Now, the Kentucky Historical Society in Frankfort retains a collection from the Narcotic Farm that is a resource for historians, clinicians, and the public. It is an important reminder to those seeking a solution to our current epidemic that steps forward must always be informed by our past.

As part of our ongoing Inside Opioid Addiction initiative, KET producer Jayne McClew recently visited the Kentucky Historical Society to learn more about the nation’s first federal drug treatment center and its influence in the ongoing battle against addiction.

“The Lexington Cure”
“In 1929, the federal government decided that we needed to deal with narcotics in a different way,” says Amanda Higgins, PhD., historian at the Kentucky Historical Society. “And the Roosevelt administration in 1933 provided the funding to allow the Lexington farm to be built, and then in 1935 it opened.”

In the Narcotic Farm off of Leestown Road in north Lexington, a population comprised of volunteer patients and inmates were subject to the nation’s first attempts at treating addiction as a disease rather than a moral failing.

“It was the U.S. desire to try and see if they could ‘cure’ addiction,” says Dr. Michelle Lofwall, Associate Professor of Psychiatry and Behavioral Science at the University of Kentucky’s Center on Drug and Alcohol Research. “This was coming to Lexington; this was the ‘Lexington cure.’”

Kentucky was an ideal setting for the hospital, says Dr. Robert DuPont, former director of the National Institute on Drug Abuse.

“In the first American heroin epidemic at the end of the 19th century and the beginning of the 20th century, heroin was sold initially over the counter,” he says. “It was a regular pharmaceutical product, and it was particularly used for pain and other kinds of problems, and the typical heroin patient was a middle-aged woman, particularly rural in that time. Kentucky was the absolute center of that issue.”

The treatment program at the Narcotic Farm started with detoxification, and over the course of its history researchers and doctors at the facility were among the first to use methadone during that process. Another key step was vocational training; all patients were required to learn a trade which would ideally prepare them to enter the workforce upon release. The facility actually operated as a working farm through the 1960s, and was renowned for a jazz band that at one time or another included such luminaries – and recovering addicts – as Sonny Rollins, Howard McGhee, and Chet Baker.

“The Narcotic Farm also pioneered talk therapy in the 1930s and 1940s,” Higgins says. “And then expanding that, eventually. By the time they closed they’d explored Alcoholics Anonymous and Narcotics Anonymous, that kind of treatment. Patients were working with other patients to do group therapy.”

Advances in Scientific Research Inform the Present
The Narcotic Farm’s most lasting innovations arguably came through the work of its Addiction Research Center, which was one of the forerunners to the current National Institute of Drug Abuse. There, doctors and researchers tested various opiates on patients to determine the level of addiction and/or relapse and how a person’s physiology was altered when taking the drugs.

“When the Harrison Narcotics Act [of 1914] came in and closed down the medical access, there was an interest from in saying well, we use these drugs in medicine and they’re very good, but what we need is a pain medicine that is not addictive,” says DuPont. “Because of that interest, the Narcotic Farm in Lexington was the center of research from the 1930s all the way through the 1970s.”

As Amanda Higgins notes, one of the more controversial aspects of the research conducted at the Narcotic Farm was that, during the course of testing the effects of narcotic use on the body, addicts were being given the very drugs they were trying to quit.

Using opioids to help an addict withdraw from opioid addiction remains controversial, but in recent years, as a response to the current crisis, more medical practices have started to use buprenorphine, a less addictive opiate than methadone, in medication-assisted treatment. These efforts, in Kentucky and elsewhere, directly descend from the trailblazing patient trials done with methadone by the staff at the Narcotic Farm.

Despite decades of research and discovery, the Narcotic Farm staff’s attempts at securing long-term recovery for their patients never were realized – but even those findings provided insight into the nature of drug addiction that became the basis for new advances in treatment.

“What research showed was that well over 80 percent of people from the Narcotic Farm relapsed when they went back to their environment, their home environment,” Dr. Lofwall says. “So what that really showed was that this is not an acute illness… it’s not something that you cure. Really, addiction is a chronic illness that you’re going to manage. And you need to manage it where the person’s going to be living.”

Then to Now: The Narcotic Farm’s Legacy
Just as Kentucky served as the epicenter for narcotics research and treatment during the mid-20th century, the commonwealth now faces an epidemic of narcotics abuse that spans prescription painkillers, heroin, and synthetic opioids and has proven difficult to counteract.

In the 2012 and 2015 legislative sessions, Kentucky lawmakers took important steps to combat the crisis by cracking down on “pill mills,” enacting new regulations for licensing and monitoring prescriptions, and, most recently, expanding the use of treatment drugs such as buprenorphine, as noted above, and the overdose antidote naloxone. (Click here for a recent panel discussion about Kentucky’s legislation and government programs.)

The materials on Lexington’s Narcotic Farm collected at the Kentucky Historical Society include organizational documents, educational papers and transcripts, photographs, and other historical records. They are valuable to anyone interested in learning about the history of drug use in the U.S., but are even more vital as tools for medical researchers and public health and criminal justice workers as they seek to develop more effective policies for the 21st-century response to narcotics addiction.

“History is not all triumph,” says Higgins, “and it’s important for us as Kentuckians to make sure that we’re making available all stories. This isn’t Daniel Boone, it’s not discovery in that way. But it is discovery. It is innovation. Just 30 miles east of here was some of the pioneering work in science. And it is our mission to make sure that is available and understood.” 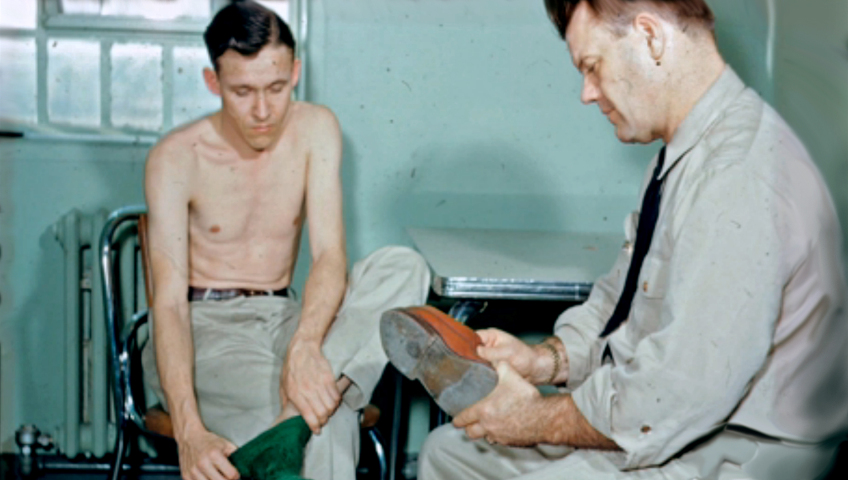