You might not expect Senate Majority Leader Mitch McConnell to name as his hero a man who dropped out of Harvard Law School, lost two reelection bids, and was so absent-minded that he once campaigned in the wrong state. That man, however, is John Sherman Cooper, the Somerset Republican who represented the commonwealth in the U.S. Senate for 20 years, and served as American Ambassador to India and East Germany.

McConnell spoke of Cooper’s “strength of character and his kindness,” and said, “…he was my hero. In all my years of public life, there’s been no one from whom I learned more.”

McConnell paid tribute to his fellow Kentuckian earlier this summer in a speech he gave at Somerset Community College. The address was for the 11th annual John Sherman Cooper lecture series at the school.

A Sense of Duty
Cooper was born in 1901 into a politically prominent family: his father and several of his mother’s relatives served as Pulaski County Judge. Cooper attended Centre College and graduated from Yale before being accepted to Harvard Law School. But the young Kentuckian had to drop out a year later after his father died. Cooper returned to Somerset to care for his mother and siblings, and to settle the debts his father’s law practice had a accumulated.

“It would take him a quarter of a century to finally pay off what his father owed, but he considered it a matter of honor that this be done,” McConnell says. “This sense of duty would prove to be a hallmark of Cooper’s life and career.”

Cooper continued his law studies on his own and was admitted to the state bar in 1928. While Cooper was slow to build his law practice, McConnell says the young attorney’s political ascent was much quicker. Cooper served a term in the Kentucky General Assembly, and then was elected as Pulaski County Judge, a post he held from 1929 to 1938.

McConnell says the job wore on Cooper, as the young judge struggled to provide food, shelter, and medical care for Pulaski countians devastated by the Great Depression. After a failed bid for governor in 1939, Cooper joined the Army during World War II, where he served as a courier and legal adviser under Gen. George S. Patton.

At the end of the war, Cooper briefly stayed on in Europe to help reestablish a judicial system in Bavaria and to repatriate refugees to their native countries. McConnell says those years left an indelible impression on Cooper.

“His experience in Europe reinforced his innate humanitarian instincts and taught him the importance of active American involvement overseas and the folly of isolationism,” McConnell says.

Mr. Cooper Goes to Washington
When Democratic U.S. Sen. Happy Chandler resigned to become Commissioner of Major League Baseball, Cooper ran for and won the seat in 1946. Cooper completed the remainder of Chandler’s term, but then the Republican was voted out in the 1948 elections.

Four years later, Cooper won the right to complete another unexpired term. This one belonged to Democrat Virgil Chapman, who died in a car accident. But as before, Cooper failed to win reelection. Former Vice President Alben Barkley defeated him in the 1954 Senate campaign.

When Barkley died in 1956, Cooper reluctantly ran for the seat and won. This time Cooper secured his reelection and would remain in the Senate until his retirement in 1972.

Even during those years when Cooper was out of office, McConnell says the Republican remained a prominent player in Washington politics. President Truman appointed him as a delegate to the United Nations General Assembly. And President Eisenhower named Cooper Ambassador to India. But it was in the Senate that the Kentuckian would make his mark.

The Consummate Bridge Builder
“Cooper realized that you need to be able to work with others,” McConnell says. “Today’s opponent might be tomorrow’s ally, so there’s no use in holding grudges and burning bridges. To that end Cooper was the consummate bridge builder.”

McConnell says Cooper forged strong relationships with Republicans and Democrats in Washington. He says the Kentuckian was a close friend of Senator and later President John F. Kennedy. Cooper was an early and vigorous supporter of civil rights and voting rights for African Americans. He also championed federal assistance for local schools, environmental protection, and the creation of Appalachian Regional Commission.

As the Vietnam War grew more unpopular, McConnell says Cooper took a leadership role to restrict combat operations that region. In 1969 Cooper crafted an amendment to limit U.S. military commitments in Thailand and Laos. A year later, Cooper joined with Sen. Frank Church, a Democrat from Idaho, to write an amendment to cut funding for military activities in Cambodia.

“Not only were these amendments an important watershed… to the war in southeast Asia, they also represented a historic re-assertion of congressional prerogatives in the face of the ‘imperial presidency,’” McConnell explains. “They marked the first time Congress had restricted military funding during war time.”

A Compelling Public Figure
McConnell says Cooper achieved political success and engendered personal respect thanks to his “high intelligence, sound judgment, and unquestioned probity.” Sen. Thruston Morton, Kentucky’s other senator in the 1960s, said Cooper radiated earnestness. Mississippi Sen. John Stennis said Cooper cast votes based on what he believed to be right, just, and in the best interest of the country. One reporter even said Cooper’s “agonizing sincerity… enraptures audiences and infuriates his opponents.”

McConnell’s own admiration for the senator is clear as he describes the months he interned for Cooper in 1964, and a subsequent visit to Washington in 1965 when Cooper asked McConnell to accompany him to President Johnson’s signing ceremony for the Voting Rights Act. McConnell says his relationship with Cooper had a profound impact on his public and personal life. Even today McConnell has a picture of Cooper hanging over his desk in the Majority Leader’s office on Capitol Hill.

But McConnell also acknowledges that his mentor was not perfect. He says Cooper was always late, never drove his own car, and was frequently able to get others to take care of him. To illustrate Cooper’s absent-mindedness, McConnell recounts the tale of a 1960s campaign trip to Fulton County in southwestern Kentucky. Apparently Cooper didn’t realize that he had spent the day politicking on the Tennessee side of the border.

“I would submit that these character traits were part of what made John Sherman Cooper so human and so compelling a public figure,” McConnell says, “and which endeared him to so many, including me.”

A Global Kentuckian
Even after his retirement, Cooper remained an active figure in Washington. McConnell says Cooper was mentioned as a possible nominee to replace Vice President Spiro Agnew. And Cooper was considered for the role of special prosecutor in the Watergate investigation.

Then in 1974, President Ford named Cooper to be America’s first ambassador to East Germany. He held that post for two years. Cooper later declined an offer to be ambassador to Israel.

Cooper died in 1991 and is buried at Arlington National Cemetery. McConnell says that Cooper stands alongside Henry Clay as the greatest Kentuckians to have served in the U.S. Senate.

“He was… a man who we can all rightly feel proud to call our own,” McConnell says, “and a man for whom the term statesman seems an understatement rather than an exaggeration.” 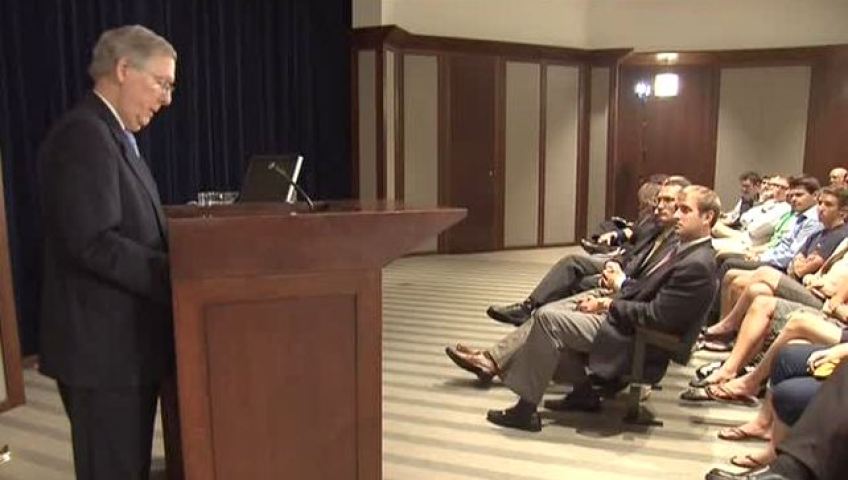