When Steven Elder emerged from his Mayfield, Ky. home Saturday night, he wasn’t sure what he would find. His town had just experienced a rare December tornado with winds estimated to be as high as 200 miles an hour.

While he and his family and his neighbors were okay, he wasn’t sure about the rest of Mayfield. So he ventured out to the courthouse square in the middle of town. Even in the cloak of darkness, Elder says the devastation he encountered was “jaw-dropping.”

“I could not believe what I was seeing… and what the force of this storm had just done to Mayfield,” says Elder, who is a local financial advisor and an organizer of the Fancy Farm picnic political speeches. “I knew then it was total destruction.”

Some of the first images out of Mayfield on Saturday morning came from state Sen. Whitney Westerfield (R-Crofton), who is a licensed drone operator. He drove to Graves County from his home in neighboring Christian County before sunup to document the damage in Mayfield. His aerial footage of block after block of debris, the flattened candle factory, and the courthouse shorn of its clock tower was soon seen around the world.

“It’s just a chilling amount of destruction,” says Westerfield. “It’s hard to fathom the amount of force and energy that nature produced to create that much destruction.”

That twister blasted a path of ruin from the state line near Fulton, through Mayfield, Princeton, Dawson Springs, and Bremen as it continued north and east through the state. Other tornados left a wake of damage and heartbreak in at least a dozen western and central Kentucky counties.

“Pictures… don’t explain it in a way that you can image,” says Kentucky Association of Counties Executive Director and CEO Jim Henderson, who toured the stormed-damaged areas. “You have to almost see it to understand the devastation.”

In Bowling Green alone, as many as 500 homes and 100 businesses have been damaged or destroyed, according to Warren County Judge Executive Mike Buchanon. He says it could take weeks to restore power to some parts of the community.

“Many streets look like a war zone with utility poles out of the ground, and wires hanging across the road and through the trees, and piles of debris where there used to be homes,” says Buchanon.

Death and casualty counts are still being tallied, but officials say this will likely be the deadliest storm system in the state’s history. Buchanon says Bowling Green could have as many as 20 fatalities alone. Two families on a single street on the west side of town endured 11 deaths. Of those, seven were children, according to news reports.

Henderson says the neighborhood where those lives were lost is populated with low- to moderate-income families living in starter homes.

“These are folks who probably have very little to rebuild with,” says Henderson. “It is just gut wrenching to see it.”

As bad as the storm was in some places, other nearby western Kentucky towns were left unscathed. Henderson County Judge/Executive Brad Schneider says his community suffered no damage or deaths.

“The fact that a tornado like this can avoid your county and destroy the one next to it just boggles my mind,” says Schneider. “I think a lot of us are almost feeling survivor guilt.”

As the sun rose Saturday morning, emergency teams from across Kentucky were already arriving in the impacted areas. J.D. Chaney, Executive Director and CEO of the Kentucky League of Cities, says the response from state and federal officials has been tremendous. He says no amount of training can prepare civic officials to cope with an emergency of this magnitude, where homes, businesses, city buildings and infrastructure like electric and water services are decimated. For example, He says Mayfield no longer has a city hall, so a temporary site is being assembled in mobile units in a local parking lot.

“It’s going to be a long, long road for them to restore,” says Chaney. “I know we’ve seen a lot of posts that say the city is gone, or Mayfield is being carted out in dump trucks, but it’s not. It’s the people that compose the community.”

Westerfield says he expects lawmakers in the 2022 General Assembly session to create some kind of aid package to help the effected towns and counties recover. Until then donations of supplies, food, money, assistance, and other essentials are pouring in from around the commonwealth and across the nation.

“As tragic as the weekend has been, it’s great to know that we love one another, we care for one another, and no one over the last several days has given one rip about who you voted for or what party you are,” says Westerfield. “It doesn’t matter. What matters is getting people back to a sense of normalcy.”

Representatives of city and county governments from across the commonwealth will be in Frankfort this winter to lobby the General Assembly on a range of issues from workforce development, to transportation, to tax policy.

“If this last year has shown us anything, it’s the importance of… looking at tax reform on many different levels,” says Morehead Mayor Laura White-Brown.

Now local governments are generally limited to some combination of occupational, property, and insurance premium taxes to generate revenues to pay for services from fire and police protection to roads and libraries. Versailles Mayor Brian Traugott says his community gets much of its revenue through an occupational tax, which he says is sufficient for Versailles but may not be for other towns.

“The key word is flexibility,” says Traugott. “That’s what cities are really looking for because we have a diverse group of cities and the way to meet the revenue needs in Morehead may differ from Versailles.”

Some mayors and county judge executives want the ability to raise additional funds to cover their escalating costs. Previous legislatures have defeated proposals for local option sales taxes that would be targeted for specific projects and time-limited. J.D. Chaney of KLC says an ongoing consumption tax that a city or county could implement would help municipalities pay their bills, foster growth, be more competitive, and involve visitors in helping to pay for local government services.

But the problem is allowing a local sales tax would require amending the state constitution.

“It’s a hard jump for some people to go to a constitutional amendment that is perceived as giving counties and cities new taxing authority,” says KaCO’s Jim Henderson.

“It could be one more tool in our box to help meet our costs, many of which are increasing partly due to unfunded mandates from Frankfort and the General Assembly,” says Schneider.

One of those unfunded, or more specifically underfunded, mandates for counties is operating county jails. Schneider says when his jailer houses a state prisoner, the commonwealth reimburses Henderson County $31.34 a day. But he says it actually costs the jail $46 a day to hold that inmate, which leaves county taxpayers to make up the difference. He says if a prisoner is sick or injured, the county may also be on the hook for paying some of their health care expenses.

“They need to upgrade their payments to counties for those prisons,” says Schneider. “It is killing many counties, and many counties have closed their jails altogether because they can’t handle the cost.”

Those costs can be substantial. For example, a recent audit shows that the state owes the Bullitt County jail about $800,000 in revenues for holding prisoners during the pandemic, according to Judge Executive Jerry Summers. He says his county already subsidizes the jail to the tune of $2.2 million, which he says is about a third of the county’s property tax revenues.

“We just can’t afford to keep footing the bills for the training and expertise that it takes to run a jail,” says Summers

One idea to help counties with jail funding is to charge cities that house inmates in their county lockups a booking fee. Mayors Traugott and White-Brown say they oppose that option, and Chaney calls it a “cockamamie idea.” He says cities already help fund their county jails through the taxes their residents and businesses pay.

Criminal justice reform advocates have pushed for measures designed to reduce jail populations. But the reforms passed so far in Kentucky have failed to achieve that goal. Schneider says ideas like measures to allow for non-monetary bail are good in theory but can also backfire.

“We’d love to be able to figure out a way to help people,” he says, “but bad people can be let go in such a way that they just commit more crimes.”

Historically, local government employees could offset their low wages with the prospect of a comfortable pension when they reach retirement. But Traugott says it’s harder to attract people to take critical municipal jobs after changes to the state’s defined-benefit public pension system.

“That’s been taken away, almost by necessity – it was extremely costly, but we are paying the price for that now,” says Traugott.

The 2022 General Assembly session starts on Tuesday, Jan. 4 and continues through Thursday, April 14. 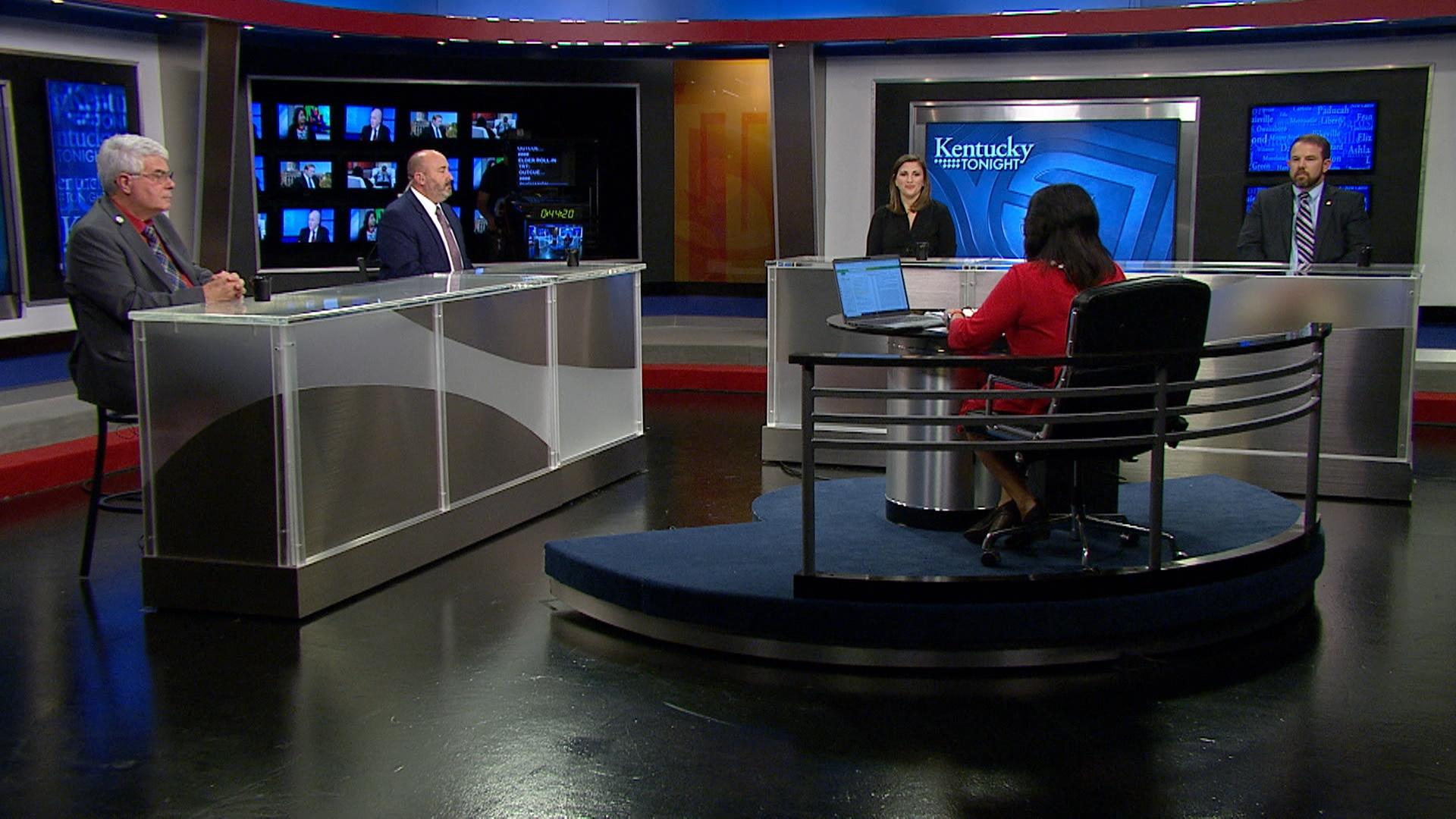