Earlier this month, as Kentucky endured its biggest surge in COVID cases during the pandemic, state lawmakers voted in a special legislative session to remove the statewide mask mandate on school students and staff. Instead, they gave local school boards the authority to decide the best course of action for their schools.

That left some educators and many public health officials worried that board members would ditch face coverings in response to public pressure against such requirements. As it turned out, that didn’t happen.

“I’m heartened that the number of districts – 97 percent – choose to continue to masking,” says Kentucky Education Commissioner Jason Glass. “Over 99 percent of students in the state are in a school building that still requires masking.”

Local flexibility on masking was one provision of Senate Bill 1, which the General Assembly passed during the special session to help public schools navigate the pandemic in the months ahead. Republican supermajorities in the state Senate and House of Representatives limited Gov. Andy Beshear’s emergency powers to issue orders such as the statewide mask mandate that had been in place for months.

Rep. Steve Riley (R-Glasgow), who is vice chair of the House Education Committee, says he’s not surprised that many districts opted to keep a mask mandate in place.

“I trust superintendents and school board members and local people to do what they feel is in the best interest of their community,” says Riley. “This gives local school boards the ability to say one size does not fit all, this size fits our local district.”

Eric Kennedy, director of advocacy for the Kentucky School Boards Association, says many board members around the commonwealth had felt “under the gun” to make decisions that may have been unpopular among their constituents. Some school board meetings around the country devolved into heated exchanges between school officials and community members over proposed mandates.

But after the Beshear Administration’s statewide mandate expired on Sept. 17, individual school boards, under SB 1, had to make their own decisions on masking. Surprisingly, Kennedy says board members faced little opposition, even when deciding to continue with the requirement.

“They polled their community and said this will very likely keep us with in-person school,” says Kennedy, “That is, from the top of the political spectrum down, everyone agrees, the number one priority.”

Some Still Call for Parental Choice on Masks

In the end only six out of the state’s 171 public school districts decided to make masking optional. Kennedy says few of the districts that kept a mandate made them open ended. Some stated the requirement would stay in place as long as their county remained in the red zone for COVID spread, while others are reevaluating the need for masks on a weekly or monthly basis.

Dawn Perkins of the Facebook group Let Them Learn says she and her members would have preferred masking be left up to parents. But she says local control is a better than a statewide mandate.

“A blanket approach to what needs to happen for Kentucky education is just not in the best interest of children,” says Perkins. “There’s not… one approach that’s going to fix everything. I just think that we have to work together to get through it.”

Although she describes herself as pro-choice, not anti-mask, Perkins says she thinks it’s “debatable” whether or not masks are effective. She says some European countries have dropped their mask mandates, while Sweden never had one.

But a recent report from the U.S. Centers for Disease Control and Prevention indicates that schools without mask requirements are 3.5 times more likely to experience a COVID outbreak. Glass, who supported the Kentucky Board of Education’s statewide mask mandate, says when it comes to protecting students and school staff it’s critical to take all necessary steps to mitigate COVID spread.

“There was all this discussion around it should be my choice, or it should be my right,” the commissioner says. “It is not a civil right to transmit a virus to someone else.”

The American Civil Liberties Union of Kentucky alerted education officials that districts that rejected universal masking requirements could be violating federal laws that require reasonable accommodations to protect students with underlying medical conditions. As a result, they may be endangering the health of some children and exposing those schools to liability.

Rep. Tina Bojanowski (D-Louisville), who is a special education teacher in Jefferson County, says requiring masks is a “no-brainer.”

“I was very concerned about not continuing the mask mandate, mostly because it had become such a politically polarized issue,” she says. “It’s very frustrating that a child might be denied their right to a free, appropriate public education because the decision was made to allow school districts to not require this safety measure.”

Bojanowski says she wishes lawmakers would have allowed the governor to require masks statewide under certain conditions, but Republicans rejected that idea.

The masking provision may have garnered the most public attention, but other aspects of SB 1 are also important to how schools will function under the lingering pandemic. Lawmakers gave districts up to 20 days of temporary remote instruction that can be used by individual schools, grades, or even specific classrooms. Glass says that may be sufficient for smaller districts, but larger districts like Jefferson and Fayette Counties may need more remote instruction days. (Remote instruction days are different from non-traditional instruction days, which are used when an entire district must be closed because of inclement weather or other issues.)

Lawmakers also made it easier for retired educators to come back to the classroom and for hourly employees to help out in schools that face a shortage of teachers.

“It’s safe to say that probably no one got everything that they wanted out of this, but there were some good things that the legislature did with this,” says Glass. “Will it be enough is the question: Is it enough to get us through until the legislature comes back together in January?”

Another provision grants schools the flexibility to launch so-called “test to stay” programs. That keeps students who have been exposed to a COVID-positive individual out of a 10-day quarantine and in the classroom, so long as they test negative on daily COVID screenings.

“It’s a resource-intensive approach, but it is an effective way of keeping kids in school, if the community can pull it off,” says Glass.

Districts as small as Morgan County, which has about 600 students, and as large as Fayette County, with nearly 41,000 students, are among the locales experimenting with the test-to-stay approach, according to Kennedy. He says it’s already proving successful at safely keeping children in class.

“Capacity to do that is definitely an issue,” Kennedy says. “Some local communities and testing providers aren’t able to get it up and running yet.”

Beyond having enough tests to administer, Bojanowski says many schools will struggle to administer a test-to-stay program. She says her school has just one staff nurse who is already overwhelmed with her regular duties as well as contact tracing responsibilities. She also wonders what happens if a student tests positive on the third or fourth day of screening.

Riley says he understands the resource challenges involved, but he adds that medical personnel he’s heard from think that test-to-stay is a good way to keep more kids in school.

“If we had enough tests for everybody, I think that would be the ideal system to use,” he says.

Stressors for Teachers and Students

The legislation does not require districts to compensate teachers for work they miss because of COVID quarantines for themselves or family members. Bojanowski says that omission means teachers have to use their own personal sick days to cover those absences.

Beyond the compensation issue, Bojanowski says educators are exhausted from dealing with regular classroom duties, remote instruction, COVID protocols, and the pressures of preparing for standardized testing at the end of the school year.

“On top of everything else, we can’t just take care of social-emotional needs, we can’t just make sure everyone is reading and doing math, we have to prepare for testing,” says Bojanowski. “That’s a heavy burden for us.”

Pandemic stress is also impacting students. Doctors at the Kentucky Children's Hospital in Lexington say they’ve seen an 11 percent increase in suicides among children, which they attribute to both increased isolation and the loss of family members or friends to COVID. They say keeping children in school when it’s safe to do so improves student mental health and academic achievement, and reduces stress at home.

Bojanowski says she has seen more students in her school exhibit emotional or behavioral issues, but she contends the contributing factors extend beyond whether schools are open or not. She points to other factors like disruptions in home life, such as a parent facing unemployment, or in the community, like an increase in gun violence. 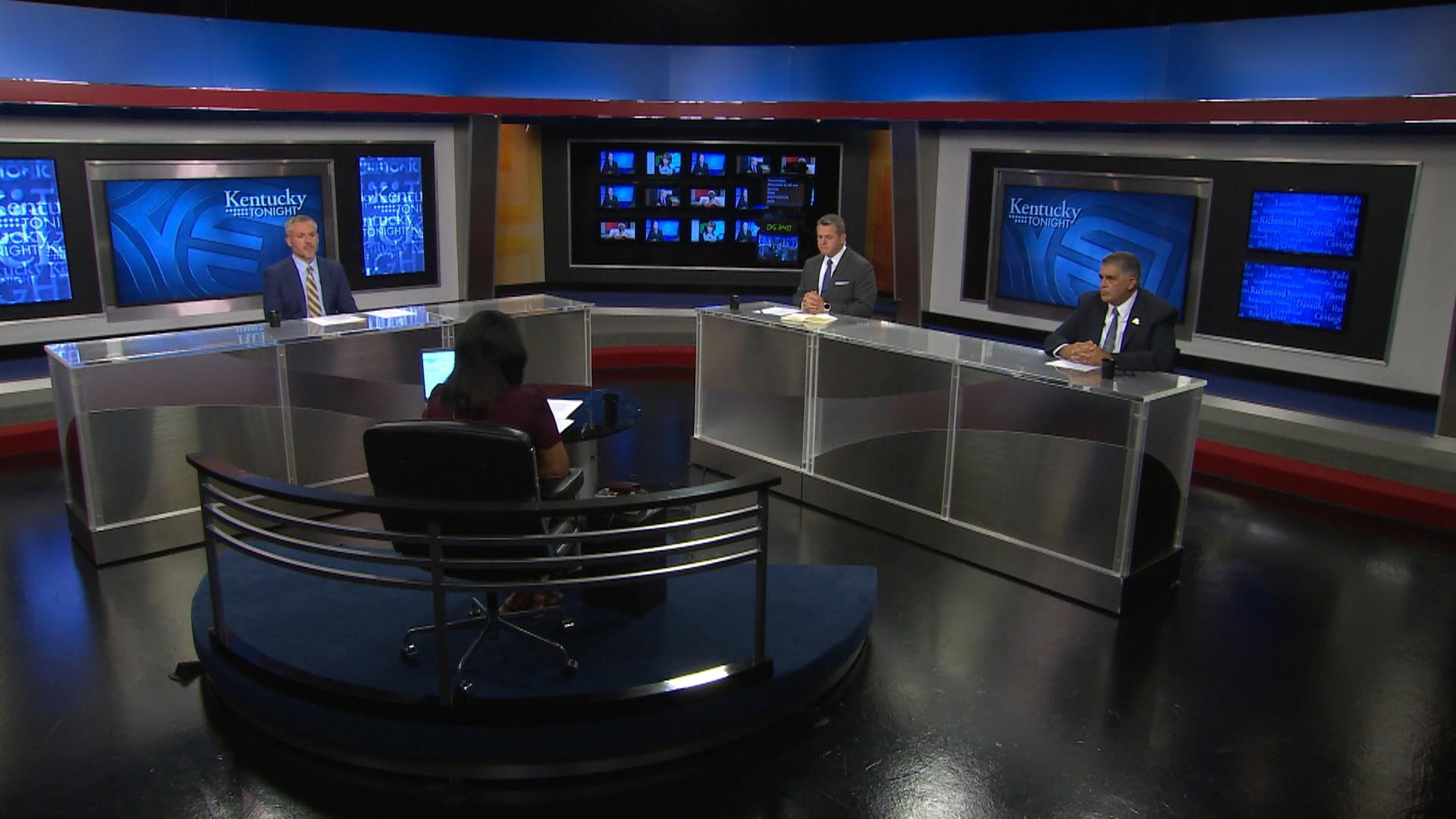