The Pros and Cons of Felony Expungement

Felony expungement is an idea that’s circulated through the halls of the Kentucky capitol for at least the past five General Assembly sessions. Even with bipartisan support and a growing coalition of social justice and business groups that endorse the idea, legislation to allow certain convicted felons to have their records wiped clean has yet to become law.

The latest attempt at felony expungement, House Bill 40, passed that chamber earlier this month on an 80 to 11 vote. But despite a call from Gov. Matt Bevin for the Senate to embrace expungement, the fate of HB 40 in the upper chamber is far from certain.

A panel of lawmakers and lawyers appeared on Monday’s edition of Kentucky Tonight to discuss the pros and cons of felony expungement and current version of expungement legislation.

‘Redemption’ for past mistakes
Under the HB 40, individuals who committed non-violent, Class D felonies and who have completed the terms of the sentence and/or parole and have had no additional criminal infractions for five years would be eligible for expungement.

House Judiciary Committee Chairman Darryl Owens (D-Louisville) is the sponsor of the legislation. He recounts the stories of individuals who have been hampered by their lingering criminal record despite having not re-offended: A former felon who had been employed by a company for 16 years, but was fired when a new owner ran background checks on employees; a young woman who was unable to get scholarship and housing assistance to pursue a college degree; and a grandfather who was barred from reading to his grandchild’s school class.

Owens says HB 40 would offer these individuals and an estimated 100,000 other felons who have completed their sentences without a further infraction the redemption they deserve.

“There are so many barriers out here to people who’ve made that mistake, and the mistake was 10, 15, 25 years ago,” Owens says. “The redemption is that you’ve made a mistake … you’ve done your time, we’re going to let you get on with your life. We’re not going to hang this albatross around your neck for the rest of your life.”

Former felons could apply for expungement in the district or circuit court in which they were originally charged. A hearing would determine the person’s eligibility for expungement and, if granted, would have the record of that felony conviction removed from the computer systems of the courts and other related agencies.

Thereafter the individual would no longer have to disclose the felony on any type of application, including forms for employment or credit.

“I refer to it as a ‘legal fiction,’” Owens says. “If you are convicted of a felony and it’s expunged, it means it never existed.”

Owens says the Administrative Office of the Courts would keep a record of the expungement, but that document would only be available to law enforcement for review.

What Constitutes a ‘Non-Violent’ Crime?
Kentucky already allows expungement for misdemeanor crimes, which are generally less serious than felony crimes. But what concerns Rep. Stan Lee (R-Lexington) about HB 40 is how loosely it defines non-violent offenses. Lee says the current bill excludes only Class D felonies that involve sex trafficking, elder abuse, possession of child pornography, prostitution, and abuse of the public trust.

The House Minority Caucus Chair contends that brief list omits many Class D crimes that he says most people would consider to be violent, such as reckless homicide, terroristic threatening, stalking, third degree burglary, torturing a dog or cat, or assaulting a police officer. (Class D felonies are the lowest class of felony crimes, and convictions can carry a prison sentence of one to five years, depending on the offense.)

Lee says the bill also fails to give judges who hear expungement requests any discretion to consider the nature of the crime or any special circumstances. If the applicant meets the requisite criteria, Lee says the court must grant expungement.

Kenton County Commonwealth’s Attorney Rob Sanders agrees that judicial discretion is a significant omission from HB 40. He gives the example of someone charged with burning down Rupp Arena, which under the law would be a Class D felony of arson in the third degree.

“I can’t imagine there’s many Kentuckians out there that think that you should be able to burn down Rupp Arena and get that expunged some day,” says Sanders. “That’s a perfect example of why there needs to be discretion.”

Another concern shared by Sanders and Rep. Lee is the practicality of deleting a criminal record. Sanders says the state’s CourtNet computer system has no way to track whether an individual has already been granted an expungement. So if an individual tried to erase a subsequent felony conviction from the record in a different jurisdiction, that prosecutor would have no way of knowing about the first instance of expungement.

Sanders also says there’s simply no way to remove a criminal conviction from publicly available records and still have that information available to prosecutors, the courts, or law enforcement. Lee adds that removing any record of a person’s criminal past puts the police at risk. For example, he says, imagine making a traffic stop and not having any way to learn about the driver’s prior convictions.

“That’s critically important to these police offers to be able to have that information in a timely fashion,” Lee says. “This is creating a barrier to that.”

Finally, Lee contends that information about criminal records exists in many other places on the Internet, so it is practically impossible to delete every detail about charges and convictions against an individual.

The Economic Argument for Expungement
About 40 states now have some form of criminal expungement, and employers are one of the big drivers behind the reform effort, according to Russell Coleman, spokesman for the Kentucky Smart on Crime Coalition. He says the organization includes a diverse set of businesses, social justice advocates, and faith-based organizations that likely don’t agree on any other issue except for felony expungement.

Coleman explains that the business groups in his coalition, including the Kentucky Chamber of Commerce, Greater Louisville Inc., and Commerce Lexington, support expungement as a way to address workforce shortages. He says companies need manufacturing employees, truck drivers, and trained individuals to fill open jobs across the state.

But having a criminal record can preclude a felon from securing gainful employment. Without a way to support themselves or their families, Coleman says those individuals are more likely to re-offend.

“Roughly 41 percent of our inmates going through the Kentucky criminal justice system at the three-year mark [after release] are recidivists,” says Coleman. “I don’t think Kentuckians are comfortable with 41 percent recidivism. We have to try something new, and [expungement] along with drug treatment, mental health treatment, and vocational services can bring that number down and make our communities safer.”

Addressing Liability Concerns
Rep. Owens says there are more than 95 job classifications that an individual can’t pursue if he or she has a felony conviction, including barber and garbage truck driver. The House Judiciary Chairman says many employers will simply tear up a job application from a person with a criminal background.

Rep. Lee acknowledges the difficulty former felons may have in securing employment. He says employers are justifiably concerned about the liability issues that can arise from hiring someone with prior convictions. That’s why Lee argues that a better solution is to grant immunity to employers who hire felons. He says that would negate the need for an expungement process that hides criminal records from potential employers.

“If we were able grant employers that kind of immunity with respect to hiring felons, and allow [employers] the opportunity to fully vet these people, I think they would hire more of them,” says Lee.

Concerns about Court Costs
Commonwealth’s Attorney Sanders says he’s open to giving deserving people a second chance, but he contends the current version of HB 40 has too many flaws to earn his support.

The state Senate is drafting its own version of expungement legislation, on which Sanders and the Kentucky Commonwealth’s Attorneys Association are providing input. He says he’s hopeful that Senate version will fix the legal, technical, and logistical issues of the House version.

Sanders adds that any legislation must address the extra workload that processing potentially thousands of expungement applications would place on the state’s already overworked court employees.

“We’re talking about doing this and trying to put more of a burden on the system at a time when, quite possibly, prosecutors, public defenders, court clerks, judges are all facing [budget] cuts,” Sanders says. “We have to address the costs associated with trying to implement this idea and this bill doesn’t do that.”

Russell Coleman of the Kentucky Smart on Crime Coalition acknowledges the workload facing the state’s justice system. But he argues that investing in expungement can be a way help the commonwealth’s coffers in the long run. 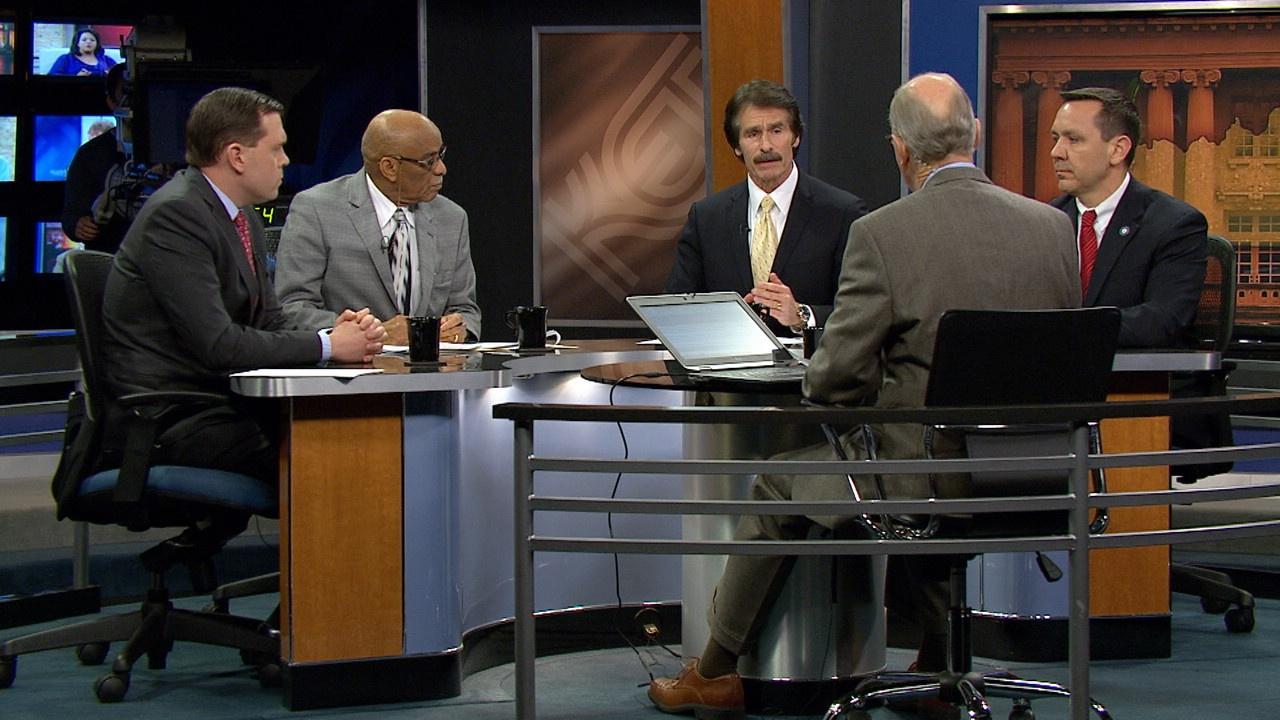