In the coming days Gov. Andy Beshear is expected call the Kentucky General Assembly into special session to consider emergency measures to address the ongoing surge in COVID-19 cases.

The executive and legislative branches have been at odds with each other since the early months of the pandemic when Beshear, a Democrat, used emergency powers granted to governors by lawmakers in the past to enact sweeping orders to help contain the pandemic. But the Republican-controlled General Assembly enacted several bills in the 2021 session to curtail gubernatorial authority, measures that the Kentucky Supreme Court recently upheld.

Now, Beshear and lawmakers must work together to craft a plan to keep Kentuckians safe from the deadly virus and its variants.

“My goal is to call a special session as soon as legislative leaders have reached a general consensus about what they think can be done,” Beshear said on Monday. “It needs to happen soon.”

Beshear, like many governors and mayors nationwide, issued a range of pandemic-related orders over the last 18 months. Among his many actions, the governor closed schools and non-essential businesses; suspended visitations at hospitals, nursing homes, and prisons; enacted measures to prevent price gouging; expanded unemployment benefits; mandated face coverings; and made it easier for people to get refills of prescription medicines.

“There’s a lot that the governor has been doing that we haven’t taken issue with,” says Senate President Pro Tem David Givens (R-Greensburg). “It’s been the process we’ve taken issue with.”

Republican legislators resented that Beshear took such broad actions within an open-ended state of emergency declaration without consulting lawmakers. They also opposed actions they felt attacked personal freedoms and damaged the state’s economy.

“We needed to work directly with the governor in order for us to come up with some ideas and solutions that we could all be in agreement with,” says House Speaker Pro Tem David Meade (R-Stanford). “It’s about including all three branches of government, that was our biggest issue. One branch should not be able to make decisions for everyone in the state and overlook the people’s house.”

Members of the Beshear Administration did testify on multiple occasions before legislative committees during the interim and in the 2021 regular session. Supporters of the governor also argue that his swift action saved lives during the highly uncertain, rapidly changing conditions of the pandemic. Taking time to convene lawmakers and getting House and Senate members to agree on public health protocols would be unwieldy and time consuming, they said.

“Sometimes we’re going to need that type of executive leadership to make those type of unpopular decisions that keep our kids safe and our businesses open,” says Senate Minority Leader Morgan McGarvey (D-Louisville).

Lawmakers Prepare to Debate Masks and Other Mandates

On Aug. 21, the Kentucky Supreme Court overruled a lower court decision that blocked legislation passed early this year to limit the scope of a governor’s emergency powers. Givens says legislative leaders and Beshear’s office talked that day about how to move forward. By the following Monday, Aug. 23, he says they were in face-to-face meetings to discuss the governor’s priorities for emergency measures to limit the current surge in COVID cases and hospitalizations that are being driven largely by the Delta variant and the state’s low vaccination rate.

Those meetings and subsequent conversations are laying the groundwork for a special legislative session that could start as early as next week to approve new mitigation orders.

“The legislature asked for this responsibility and it means that we have to make some tough decisions,” says House Minority Leader Joni Jenkins (D-Shively). “There are going to be some decisions I think need to be made that may not be politically popular with folks, such as masking for school children.”

Republican leaders are pledging a more open process to determine what orders to enact.

“We’re going to be engaging in conversations that are transparent,” says Givens. “The public’s going to have a chance to feedback rapidly to the people that represent them, and then we’ll produce policy that we can all agree to.”

“The difference is we don’t have someone standing behind a podium and saying, ‘I now order this,’” he adds.

This week, interim committees for Health, Welfare, and Family Services, Education, and State and Local Government are meeting to begin discussions on a number of potential orders.

Meade says lawmakers are also reviewing each of Beshear’s emergency regulations and executive orders to see what they will keep, change, or eliminate. (Those orders still in effect are set to expire Sept. 10.) Givens says one of the biggest differences between the governor’s approach and what Republican lawmakers prefer is over statewide mandates.

Givens says that even with a Kentucky Board of Education mask mandate in place for all public school students and staff, the state still has record high COVID case numbers. Instead of a statewide mandate, he says local school boards should decide what’s best for their students and their communities.

McGarvey says masking remains a critical mitigation measure. He points to the Warren County school district, which started the new academic year without a requirement for face coverings. After the statewide school mandate began, McGarvey says the number of Warren County students in quarantine dropped by half. He contends that getting children to wear a mask isn’t as difficult as some people claim.

“Do they love wearing masks in school? Not particularly,” says McGarvey, who is a father of three young children. “But I promise you it bothers them a lot less than it seems to bother a lot of adults who aren’t in their shoes.”

Jenkins says there will be a robust discussion about a mask mandate. She says it would be unwise to make local school boards set masking policies since there have been several instances nationwide where school officials who support mandates have been threatened with physical violence and property damage.

“My fear is that we would put school board members in a really precarious situation,” Jenkins says. “I hope that we will make those hard, courageous decisions and not push them down on the locals.”

Just weeks into the new school year, more than 20 school districts have already had to cease in-person instruction due to high numbers of COVID cases and quarantines among students and staff. As with the shutdowns last year, districts have the option of deploying non-traditional instruction (NTI) or remote learning to keep students up on their studies.

But the legislature voted earlier this year to reinstate a 10-day cap on the number of NTI days schools can use. Givens says the goal is to maintain in-person instruction as much as is safely possible, but he says lawmakers will revisit the current NTI limit so districts have the flexibility they need should they face extended closures. He says they will also explore having the NTI limit apply to an individual school or even individual classrooms rather than forcing a district-wide closure.

Givens says lawmakers are considering a range of other options for schools that are struggling under the pandemic:

– Change the school funding formula so it doesn’t penalize districts that experience long-term shutdowns. Instead of basing school funding for next year on this year’s in-person attendance, Givens says they may revert back to the attendance levels for the 2018-2019 school year.

– Waive the 90-day hold-out period for retired teachers and bus drivers, which would allow them to come back to work sooner to help schools facing personnel shortages.

– Allow superintendents to hire new teachers and bus drivers on probationary status pending the completion of their background checks. Givens says they would ask the Kentucky State Police to prioritize background checks on school personnel to speed this process.

– Explore a “test to stay” option (also known as "test and stay") to minimize the number of students in quarantine. This would allow unvaccinated students who have been exposed to COVID at school to remain in class as long as they continue to test negative on regular health department COVID tests.

Other Actions Lawmakers May Consider

– Give greater flexibility to foster parents on court appearances, background checks, home studies, and other requirements.

– Grant reciprocity to medical professionals from other states who come to Kentucky to work.

– Use federal COVID relief dollars to create a fund that would help attract, retain, and reward frontline health care workers.

– Balance the rights of businesses who may wish to require COVID vaccinations as a condition of employment with the private rights of individual workers.

“What I’m looking forward to… is a transparent vetting of all these ideas, says Jenkins. “Because I think that’s very important that not only should each legislator feel comfortable with where we’re going but also the public should as well.”

All of the legislators agree they must move quickly but carefully to find the best ways to protect public health.

“It’s going to take us coming together in some way shape or form to put politics aside if we can and really try to stop the spread of this virus together,” says McGarvey. “The stakes really are as high as people’s lives.”

Givens says he’s excited about the legislative process that’s ahead for lawmakers. But he also acknowledges that everyone, including Republicans who have demanded more of a voice in the state’s COVID response, are struggling to find the right path to containing the virus and returning to normal life.

“What is the Republican strategy to defeat COVID? I wish there were one, I wish we all had one,” says Givens. “This can’t be solved by government alone. This has to be individuals caring for communities, caring for each other, and taking action.” 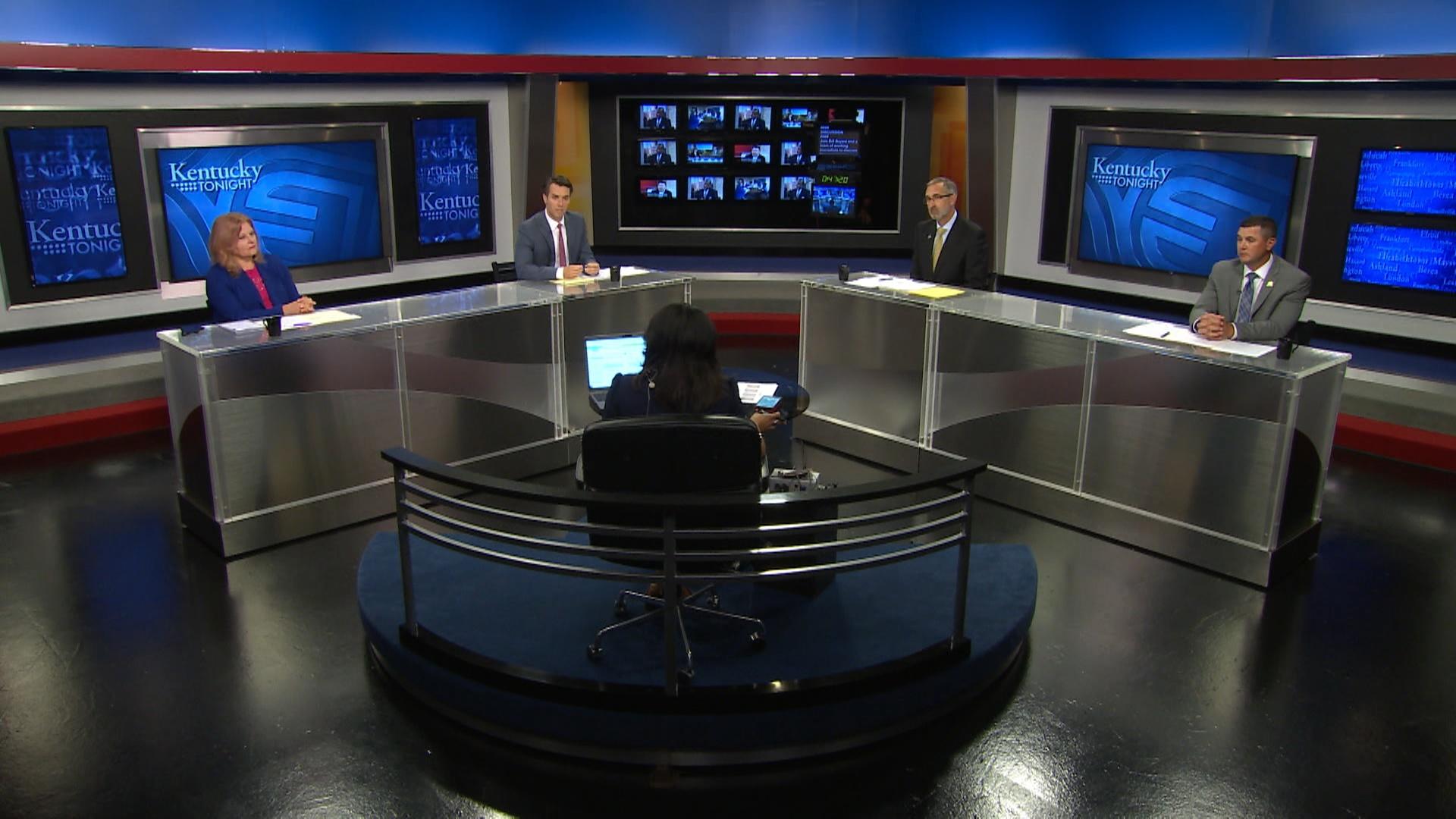