On the Eve of a New Legislative Session

If you’ve grown weary of hearing about pension liabilities and Medicaid bills, now might be a good time to book that extended vacation to a deserted island.

On the other hand, if you yearn to see state lawmakers engage in further debates about those issues, the next 15 weeks will offer you a nearly endless buffet of political discourse. And it all begins today as the 2016 General Assembly convenes to tackle some of the thorniest challenges legislators have faced in many years.

Pensions and the Budget
The primary task before lawmakers is to pass a new $20-plus billion biennial budget for the commonwealth. In the process, legislators and Gov. Matt Bevin will have to determine how much of that budget will be consumed by payments to the state’s foundering public pension systems, and what cuts might that force in other public spending on education, social services, and infrastructure projects.

Speaker Stumbo says the Kentucky’s financial woes aren’t as bad as some claim because the state is projected to end this fiscal year with a $220 million surplus. Plus he says the economy is strong and the state’s unemployment is low.

But Stumbo does acknowledge that the public employee and teacher pension plans do need an infusion of cash to stabilize the systems, and will need reforms going forward. He says the research done by former Gov. Steve Beshear’s Kentucky Teachers’ Retirement System Funding Work Group created a greater understanding of the complexity of the pension problem.

“I think the legislature has come full circle on its knowledge of how the pension systems work,” says Stumbo.

The four lawmakers agree that the state is obligated to provide the benefits already promised to current employees and retirees under what’s called the inviolable contract. Stumbo says legislators may consider moving new KTRS hires into a hybrid pension system similar to what was done for KERS members through a 2013 reform package. Gov. Bevin has proposed moving new hires to a 401(k)-type plan.

Senate President Stivers says he bristles when people blame the legislature for the pension woes. He says lawmakers simply followed the funding recommendations of both Republican and Democratic governors. Stivers says failure to make the proper payments into the systems only represent a small part of the pension problem.

The much bigger issue, according to Stivers, is low investment returns during the recession and portfolio management issues. He joins the Kentucky Chamber of Commerce in calling for a full audit of the pension systems to reveal all the behind-the-scenes fees being charged by the fund managers.

“We don’t know those things… and we have a duty and obligation to protect the $17 billion portfolio so [retirees] can make sure they’re getting their benefits in the future,” Stivers says.

Given the enormity of the pension systems, Stivers suggests hiring an outside accounting firm to conduct the review rather than assigning the task to the state auditor’s office.

Tax Reform
For years, politicians, business leaders, and citizen advocacy groups have called for an update of Kentucky’s aged tax codes. Some contend the policies currently on the books leave millions of dollars in potential state revenues uncollected. Despite study after study on the matter, the legislature has failed to act on the matter, largely due to the difficulty of getting bipartisan agreement on what comprehensive tax reform would actually look like.

“I think you need a tax code that stimulates more jobs,” Stivers says.

As an example, Stivers points to a recent rollback of a tax on bourbon barrels warehoused in the commonwealth. While the state lost some tax revenues as a result, distilleries used that money to expand their Kentucky operations and hire more employees, which the senator says ultimately benefits the commonwealth.

Stivers also says tax codes should be updated to reflect technological advances that have occurred in recent decades.

Speaker Stumbo counters that tax credits aren’t tax reform. He contends some business incentives are outdated and no longer needed, so he recommends building a new set of codes from scratch. Stumbo says tax rules must be fair and easy to understand, and should benefit middle- and working-class families. And he says the modernization process will have to start with the executive branch.

“It’s difficult… for the General Assembly as a body to lead that charge, because we have so many different views,” Stumbo says. “I think the governor has to set the agenda.”

Prospects appear to be dimming for a local-option sales tax amendment. Rep. Hoover says the idea to fund local infrastructure projects through a small, time-limited sales tax increase within a specific community has less support now than it did a year ago.

Education Reforms
About half of General Fund spending goes to support public education from kindergarten through college. School and student funding suffered during the recession years, but Hoover and Sen. Webb say they hope no further cuts will be necessary in the new biennium.

Gov. Bevin has made enacting legislation to allow charter schools a key part of his agenda. To move that idea forward, Sen. Mike Wilson (R-Bowling Green) has proposed creating a pilot project of public charter schools in urban Fayette and Jefferson Counties.

Sen. Webb says she’s followed the progress of charter schools in other states. She says she would need a detailed proposal before being able to feel comfortable with the idea of bringing charters to Kentucky.

“There would need to be a comprehensive plan even for an experimental or pilot [project],” Webb says. “There needs to be some uniformity and transparency and accountability because you’re basically privatizing public education.”

Rep. Hoover says Stephen Pruitt, the state’s new education commissioner, is open to charter schools as long proper accountability measures are in place. With some African-American families and ministers calling for help with struggling schools in neighborhoods of west Louisville, Hoover says it’s time for lawmakers to act.

“I am a strong supporter of public education, but [people in Louisville are] crying for an alternative to address the some of the major problems that they see in their schools in Jefferson County,” Hoover says. “I think we have an obligation to respond to them.”

Medicaid Expansion
Given all the other budget pressures facing the commonwealth, Gov. Matt Bevin says the state simply can’t afford to pay for the expansion of Medicaid that former Gov. Steve Beshear enacted. In the next biennium, that bill is expected to about about $250 million.

Hoover says Bevin is being methodical in his approach to the problem, and compliments the governor on forming a work group to explore the option of getting a federal waiver to implement a new Medicaid system in Kentucky.

Rep. Stumbo cautions against changing Medicaid because he contends the enrollment of thousands of previously uninsured people has stabilized health insurance premiums for all Kentuckians.

Sen. Stivers argues that the Obamacare reforms as implemented in the state have actually increased insurance rates. Like Bevin, Stivers advocates for a Medicaid system similar to the one in Indiana that emphasizes personal responsibility, requires beneficiaries to make modest premium payments, and charges small fees for certain services.

Whatever changes may come to the state’s Medicaid system, Sen. Webb says lawmakers must consider the impacts to hospitals and other health care providers in rural Kentucky. She says those facilities play a critical role in providing access to care.

Working with the New Administration
Webb compliments Bevin for the experienced team he’s assembled for his cabinet. She says she thinks Kentuckians want Bevin to be realistic about the time it will take for him to accomplish many of the items on his agenda.

“I think they want to hear that he’s being deliberate, he’s being thoughtful, and he’s listening,” Webb says, “and that he will let his positions be formed as he goes and still hold true to his ideology.”

Hoover says many of his constituents are proud of the new governor and optimistic about his prospects despite the daunting challenges the state faces. He says his advice to Bevin is to convey a message of patience to Kentuckians.

“We have a lot of issues that he wants to address and he can’t get them all done at one time,” says Hoover.

Sen. Stivers says Bevin is more pragmatic than people think. The Senate President says he valued his bipartisan working relationship with former Gov. Beshear and that he hopes House Speaker Stumbo will be as open to working with Bevin. Despite their philosophical differences, Stivers says Republicans and Democrats can come together on important issues.

“I think the public has grown tired of political rhetoric to the detriment of policy,” Stivers says. “They want real dialog about real issues to try to figure out what the real problems are to come up with real solutions.”

For his part, Rep. Stumbo says he wants to see how Bevin transitions from campaigning to governing, and he’s eager to review the policy details the governor will present in the coming weeks.

“We’ve told our members let’s don’t draw lines in the sand, let’s see if we can play together in the sandbox,” Stumbo says. 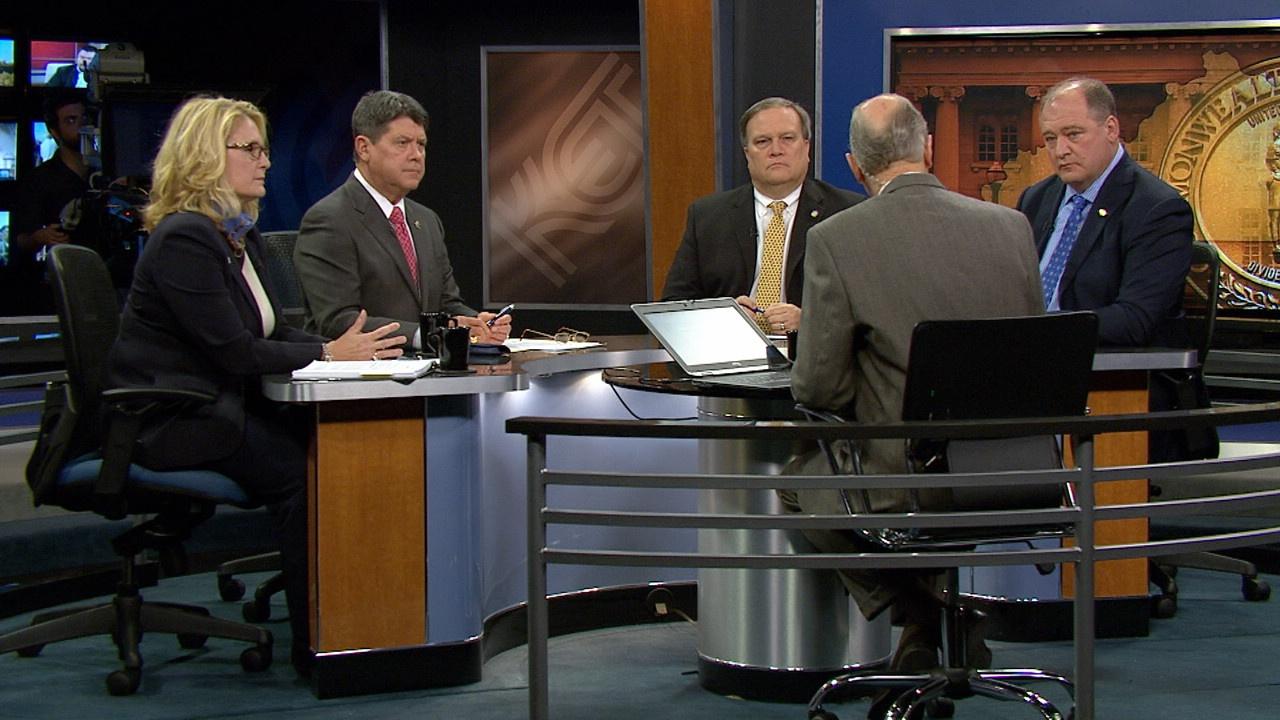