Should non-union workers at a unionized business be forced to join that union or help pay for its services?

Should labor costs for public education construction projects be set by state officials rather than by market forces?

As the Kentucky General Assembly debates those questions, business interests that support right-to-work legislation and a repeal of prevailing wage requirements are squaring off against organized labor groups who hope to once again prevent those proposals from becoming law.

And the two sides stated their cases in a lively discussion on KET’s Kentucky Tonight.

Attracting More Business
Although Kentucky has rebounded nicely from the recession, Kentucky Chamber of Commerce President and CEO Dave Adkisson says the commonwealth could have an even stronger economy if it became a right-to-work state.

Right-to-work legislation frees employees from the mandate that they join or pay fees to a union that operates at their place of work. Adkisson contends that many companies looking to relocate don’t even consider Kentucky because it lacks a right-to-work law.

“Being a right-to-work state matters to the business community,” says Adkisson. “It matters to the people who make decisions about where to locate operations.”

Adkisson says states with the right-to-work designation, like all other southern states have, tend to have faster growth. He says passing right to work here would generate thousands of new jobs each year for the commonwealth, and it would be an undeniable signal that Kentucky is business friendly.

Bill Londrigan, president of the Kentucky State AFL-CIO, says companies looking to relocate actually base their decisions on a range of factors, including the availability of a skilled workforce, energy costs, and transportation access. He points to the growth Kentucky has experienced in recent years, especially in the auto industry, as proof that the state performs well without the right-to-work designation.

He says no one is forced to join a union. He contends that since non-union employees get the benefit of a workplace collective bargaining agreement then they should help pay some of the costs of negotiating and managing those agreements. He says right to work puts an unfair stranglehold on unions and their collective bargaining strength.

“It breaks down union solidarity at the work site and divides workers in that work site [between] those that are paying a fee and those that are not,” Londrigan says. “Right to work is all about weakening unions and lowering wages for workers.”

Other Impacts of Right to Work
Londrigan adds that states with right to work tend to have higher rates of on-the-job accidents and death, less per-pupil spending on education, and higher rates of poverty.

Anna Baumann, research and policy associate at the Kentucky Center for Economic Policy, concurs, saying current union rules don’t just benefit employees in those particular workplaces. They help improve quality of life for all workers in the state.

Baumann adds that federal law says employers aren’t legally bound to negotiate with a union if the union doesn’t represent everyone in the workplace, which is what she says would happen under a right-to-work scenario.

Frustrated by the lack of a statewide right-to-work designation, a dozen Kentucky counties have passed their own right-to-work ordinances. Warren County became the first county in the nation to pass such a local law and Julia Crigler, state director of Americans for Prosperity, says it’s already resulted in 9,700 new jobs and $1 billion in new investments in the county in the first year.

Crigler says right to work is about individual freedom and giving workers a choice on whether they support a workplace union or not.

“If unions provide such a great service, why not open that up to an option instead of having to force it upon individual workers,” says Crigler. “We’re not trying to shut down the 10 percent (of workplaces) that are unionized. We’re just giving the individual employee a choice.”

Prevailing Wage
In Kentucky, prevailing wage rules apply to public works construction projects that cost more than $250,000. The state labor cabinet sets wage and benefit rates for the different trades employed on those projects based on surveys of what those workers are paid in different areas of the commonwealth. More than 30 states have some kind of prevailing wage law.

Last week the Kentucky Senate approved a bill that would repeal prevailing wage requirements on public school and university construction projects. Senate Bill 9, sponsored by Sen. Wil Schroder (R-Wilder), passed the chamber on a party-line vote of 26-11 and now goes to the Democrat-controlled House, where similar measures have died in recent years.

The Kentucky Chamber of Commerce’s David Adkisson calls prevailing wage a “superficially inflated wage.” He points to a Legislative Research Commission study that showed costs were 24 percent higher on prevailing wage projects than those put out through a normal bidding process. By repealing prevailing wage requirements, Adkisson says state projects would be cheaper to build and thus save taxpayer dollars.

“The fiscal situation of Kentucky is probably worse than it’s been in decades…. because of this pension problem,” Adkisson says. “The government has to now look under every rock and behind every corner to find the tax dollars that they can spend, so this [can create] real savings.”

Worker Pay and Job Quality
Anna Baumann of the Kentucky Center for Economic Policy contends that prevailing wage rules help ensure that state-funded construction projects attract the best workers. She disputes the LRC study, saying it doesn’t take into account the savings that prevailing wage generates by employing higher-skilled laborers that are more productive and do better quality work.

Yet determining the quality of a finished job can be difficult, says Julia Crigler of Americans for Prosperity. She says there’s no data that supports the notion that higher labor wages result in a superior construction job. But she says there is proof that eliminating prevailing wage requirements can save money.

The AFL-CIO’s Bill Londrigan says prevailing wage rules have served Kentucky well for decades, and he points to how the new downtown Louisville bridge, which was built under federal prevailing wage rules, came in ahead of schedule and under budget. He also doubts the cost-savings that repeal of prevailing wage might generate because he says pay and benefits for laborers only account for about 20 percent of the costs of a construction project.

Londrigan notes that a previous suspension of prevailing wage rules for Kentucky school projects in the 1980s had to be repealed because of quality problems that arose at those construction sites. He opposes efforts to end prevailing wage requirements because he contends it’s bad public policy to use the state’s buying power to ratchet down wages for workers.

“It’s about attracting people to an industry and maintaining them in that industry so they can build the buildings that we need,” Londrigan says. 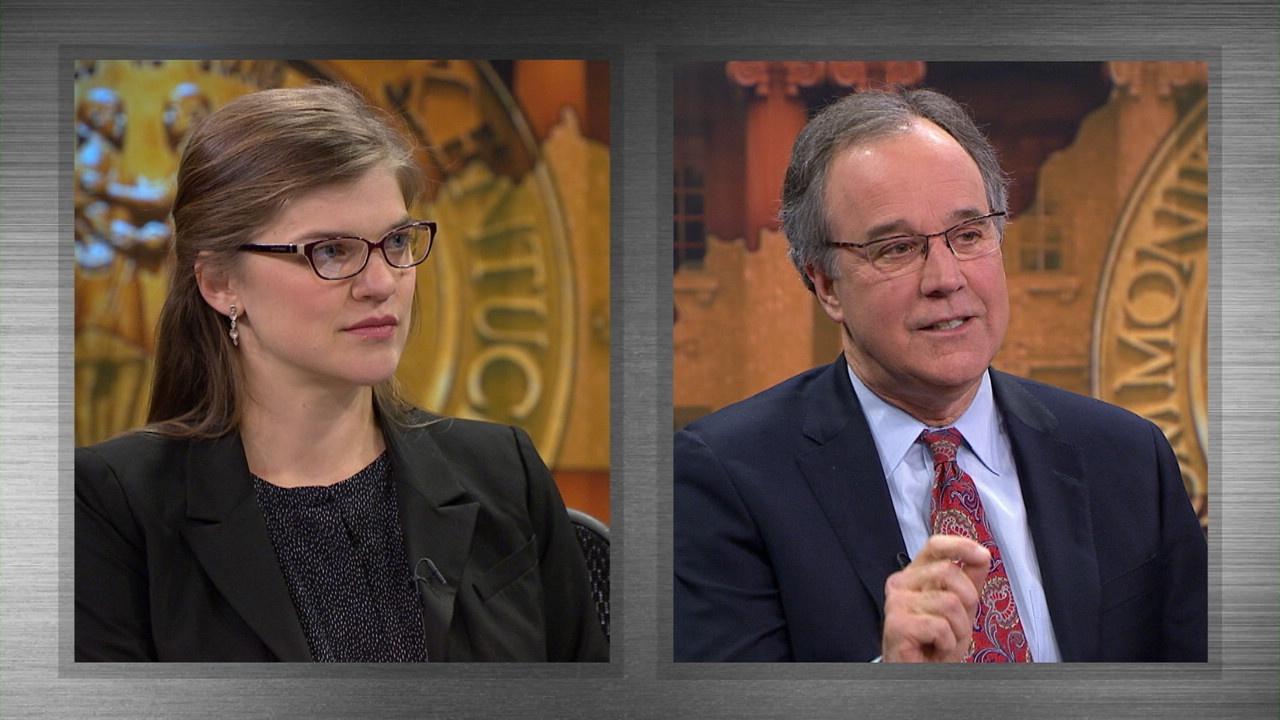