Politicos Forecast Kentucky's Legislative and Gubernatorial Races in 2022 and 2023

It’s conventional wisdom that the first midterm election after a presidential election usually delivers bad news for the party of the occupant in the White House.

In today’s political climate though, conventional wisdom may not hold as true as it once did. Even two early indicators – this year’s gubernatorial races in Virginia and New Jersey – offered mixed results for pundits to analyze. It’s not uncommon for the opposite party to win the governor’s mansions in those states the year after a presidential contest.

That held true in Virginia where Republican businessman and political newcomer Glenn Youngkin won his gubernatorial race by 2 points. But in New Jersey, Democratic incumbent Phil Murphy beat his Republican opponent by 3 points.

While that should have been good news for Democrats, Republicans note that President Joe Biden carried both states by 10 points in the 2020 election. That could be further indication that Democratic candidates across the United States and in Kentucky could face stiff headwinds in 2022 and beyond.

“New Jersey and Virginia most definitely were a referendum on the president,” says GOP consultant Ellen Williams. “There was frustration and anger and so they went to the polls and they voted Republican in Virginia.”

Another point of bad news for Democrats, according to Williams, is that Biden’s approval ratings are lower now than President Barack Obama’s numbers were at the same point in his first term. She says that sets up a scenario where Republicans could win as many as 60 Congressional seats next year, which she says is what happened in the 2010 mid-terms under Obama.

Kentucky Democratic Party Chair Colmon Elridge says the two recent gubernatorial races were not a commentary on Biden’s performance so far. He says they also may not be good indicators of future performance by Democrats, especially for races in this commonwealth.

“Kentucky’s not Virginia, Kentucky’s not New Jersey and those candidates ran races specific to their state, “Elridge says. “The voters in those states made local decisions, and to the best of our ability as we move forward we’re going to make these races about Kentucky.”

A recent NBC News poll found that 71 percent of Americans, including nearly half of all Democrats, feel that the nation is on the wrong track. Elridge attributes those poor numbers to frustration over the protracted policy debates in Washington over the infrastructure bill and Biden’s Build Back Better plan.

“There’s a lot of time between now and 2022 and there are a lot of really important policies that we’re going to see implemented throughout America,” she says. “I think there are going to be tangible things people can point to in their communities about what happens when Democrats govern.”

Until then, Amy Wickliffe of McCarthy Strategic Solutions says voters are feeling significant economic pain now. She contends it will take a significant turnaround to get Biden’s approval numbers to improve. Part of the problem, she says, is that Biden ran as a moderate in a party that she contends is being pulled to the far left by the likes of Vermont Senator Bernie Sanders and New York Congresswoman Alexandria Ocasio-Cortez.

“I think what we’ve found out [is] he’s not a moderate,” says Wickliffe. “You have to wonder, the people who crossed over to vote for Biden, are they having some buyer’s remorse?”

The Tug of War Between Kentucky’s Executive and Legislative Branches

Although the next gubernatorial race in Kentucky isn’t until 2023, Gov. Andy Beshear has already announced his bid for a second term. The bulk of the Democrat’s first term has been consumed with managing the state’s pandemic response, and Armstrong says Beshear has done an incredible job of governing.

“The Kentucky economy is on fire,” she says. “Just this year we’ve announced 15,000 jobs and $10 billion in investment.”

But Republicans argue that the credit shouldn’t go Beshear. Williams contends the governor has been lucky and has benefited from an environment that he didn’t create.

“He’s riding the wave of good policies that have been put in place by the Republican majorities in the House and the Senate,” she says.

“It’s not luck,” says Elridge. “Andy Beshear is good at what he does.”

Beshear won in 2019 by just over 5,000 votes, defeating an unpopular Republican incumbent, Matt Bevin. Since then, Wickliffe says voter registrations have continued to tilt in favor of the GOP with Republicans gaining 109,000 registrations and Democrats losing 38,000 individuals from their rolls.

“It’s really hard to measure a governor when the only issue that his first two years have been completely consumed with [is] COVID,” says Wickliffe. “There was no playbook for that.”

Beshear’s COVID mandates have been deeply unpopular among Kentucky Republicans, who criticized the governor for not involving GOP legislative leaders in pandemic response. In response, the Republican supermajorities in the 2021 General Assembly passed new limits on a governor’s powers during states of emergency.

“You can’t have executive orders that go on and on and on,” says Williams. “There has to be an end time.”

Democrats took a very different view of the legislature’s actions.

“What the General Assembly did is grab a bunch of power for itself and try to take over the job of being the executive branch,” says Armstrong. “Those supermajorities have rebuffed him and made his life more difficult at every turn in part because they don’t him to succeed.”

Republicans argue that no single person, regardless of his or her party, should be able to enforce emergency measures that have no end date, and that it’s the job of the people’s chambers of government to make policy. Wickliffe says the public outcry against Beshear’s mandates proves that the limits on gubernatorial power that Republicans pushed through were necessary.

“They listened to their constituents – thus they took action to try to put some smart parameters around so that it’s not just one person dictating what the rules are,” says Wickliffe.

Elridge contends the governor has tried to work with Republicans, and that he did keep legislators informed about his pandemic actions and hear their responses. He says Beshear made tough decisions he knew would be politically unpopular while Republicans abdicated their responsibility to govern.

“What they’re really crying about is he didn’t do what they wanted him to do,” says Elridge.

The General Assembly in 2022

In addition to Congressional races and a U.S. Senate contest, Kentuckians will also vote on state legislative races next year. But before then, lawmakers must create new Congressional and legislative districts. The uncertainty over how those maps will look has prompted many incumbents and potential challengers to hold off on filing their candidacy papers.

It’s the first time that Republicans will be in charge of the redistricting process. Williams says their work was delayed because the census data they need to redraw maps arrived late due to COVID. Senate President Robert Stivers (R-Manchester) and House Speaker David Osborne (R-Prospect) have asked Beshear to call a special legislative session so lawmakers can approve the districts before the start of the 2022 General Assembly session on Jan. 4, and the current candidate filing deadline of Jan. 7.

“If we could take that off of the plate of an already very busy legislative session that we’re about to embark upon, it would really allow more airtime for other important issues,” says Wickliffe.

But according to Armstrong, Beshear wants to know that Republicans have agreed to a redistricting plan before he calls a special session.

“I don’t think Republicans have gotten it together enough to know what that is,” says Armstrong. “I imagine that there’s a little bit of infighting because the areas that have lost population are the Republican strongholds.”

Williams disputes the idea of Republican infighting, but she says lawmakers do want to avoid pitting incumbents against one another. She says the work of redrawing maps is made harder by the fact that population losses have occurred largely in small, rural counties in eastern and western Kentucky.

“You can’t just split counties willy-nilly, they have to be of a certain size,” says Williams. “East of I-75, the only counties you can even think about splitting are Pike, Laurel, Madison, and Boyd County.”

That may leave many of those smaller counties being grouped into districts with counties in the central part of the state, according to Williams.

Whether the new maps are approved in a special session or during the first week of the regular 2022 session, Williams says lawmakers may choose to delay the filing deadline to give candidates more time to consider their options for the new districts.

Williams says it’s not surprising that some lawmakers are stepping aside this cycle.

“It’s hard to be a public servant. The issues are challenging, COVID took a lot out of everybody,” she says. “It’s not part-time – they work all the time at home, in Frankfort, nobody leaves them alone.”

Both Williams and Elridge say it’s exciting to see the energy and enthusiasm that younger generations are bringing to politics. They say that is good for their respective parties and for the commonwealth.

“When you empower that new generation, that new way of thinking, it really can move a state, a city, a county forward,” says Elridge.

Although Republicans swept the three recent special elections to fill a vacant Senate seat and two House seats, Elridge says he’s excited about the prospects for Democrats in 2022. Williams predicts the GOP will add to their supermajorities, perhaps going as high as 30 or 31 seats in the Senate, and 75 seats in the House. 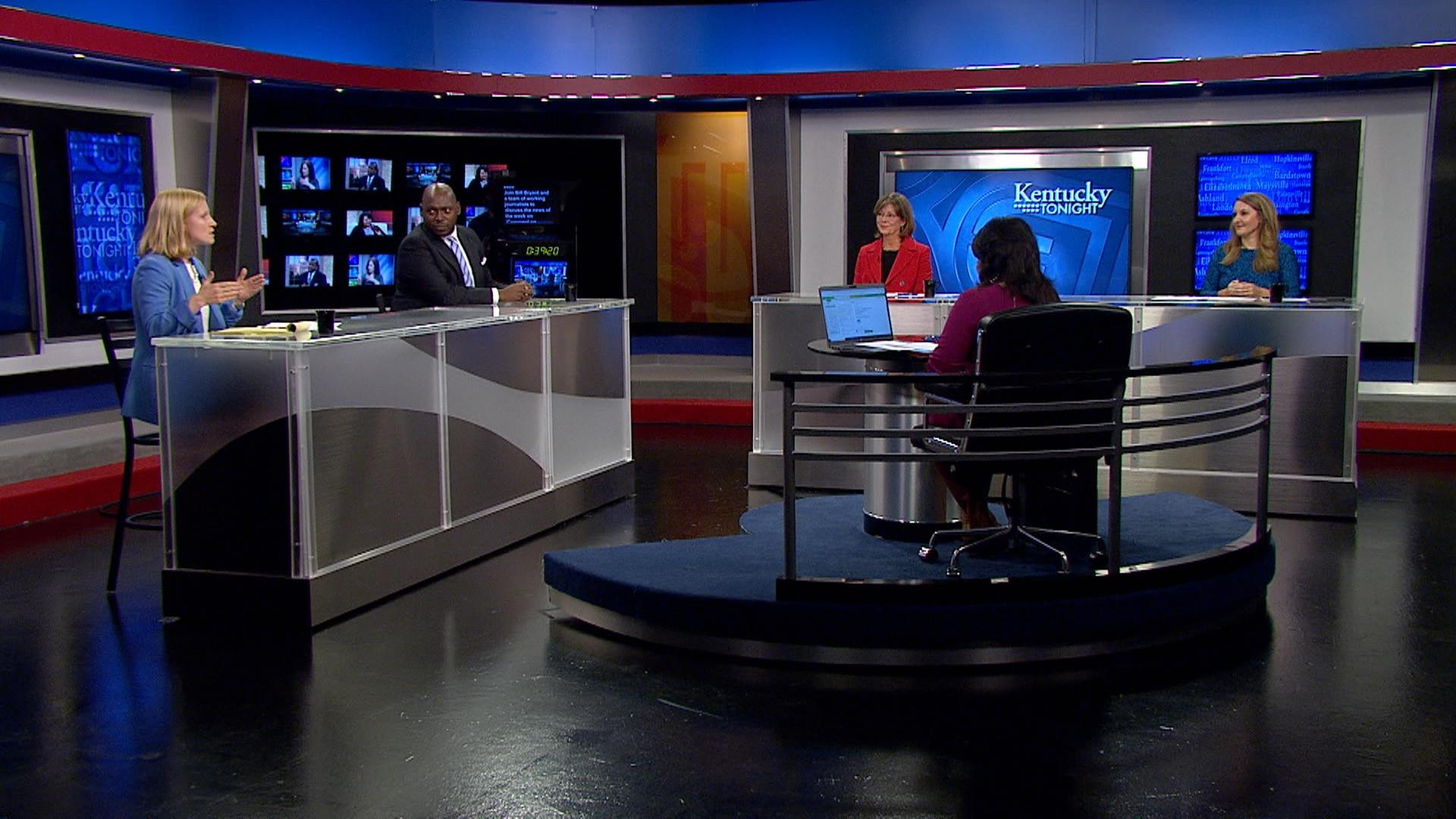