On January 31, 2018, four Kentucky authors were inducted into the Kentucky Writers Hall of Fame during a ceremony at the Carnegie Center for Literacy and Learning in Lexington.

The Hall of Fame was established in 2012 to celebrate outstanding writing from the Commonwealth over 200 years and to inspire up-and-coming writers to express their voices.

John Fox Jr.
Bourbon County native John Fox Jr. was a journalist, essayist, and novelist born in 1862. His writing career began when he enrolled at Transylvania University at just 15 years old, where one of his professors was fellow Kentucky Writers Hall of Fame member, James Lane Allen. Fox would later transfer to and graduate from Harvard University. After graduation, he worked as a reporter in New York City for a time before returning home to Kentucky to assist with his family’s coal mining business.

Eastern Kentucky’s coal country served as an inspiration for Fox’s writing and became the backdrop for his fiction.

“With encouragement from James Lane Allen, he submitted his first short story, called A Mountain Europa, to Century Magazine,” says Jayne Moore Waldrop, Carnegie Center Literary Liaison. “[They] not only published the story, but sent him $262, which was an enormous sum for a story, then and now.”

Fox returned to journalism as a correspondent for Harper’s Weekly during the Spanish-American War. Afterward, he went to live in Big Stone Gap, Virginia, near his family’s coal operation, and published his novels The Little Shepherd of Kingdom Come and The Trail of the Lonesome Pine, which sold more than a million copies each.

Fox appeared on the lecture circuit where he was considered an expert on Appalachia. His portrayals of the people of the region have had a lasting effect, for better or worse.

“Many scholars of southern literature have written about Fox’s pejorative portrayals of the Appalachian mountaineer, noting that while he did not invent the stereotypical image of the hillbilly, he indeed popularized the view of Appalachian culture that has had remarkable longevity,” says Waldrop.

Fox died at age 56 from pneumonia, but his cultural influence continues. Six of his novels are still in print, and his books have been made into movies and Broadway shows.

Annie Fellows Johnston
Children’s author Annie Fellows Johnston was born and raised in Indiana, but it was a visit to Pewee Valley, Kentucky, that inspired her most notable work. She relocated to the area and used it as the setting for The Little Colonel series, the first volume of which was published in 1895.

The Little Colonel series included 13 books, but it wasn’t Johnston’s only work. From 1895 and 1914, she published at least one book each year, and over the course of her career produced 40 books. She became a wildly popular author among young girls of the time.

“Young readers created Little Colonel clubs,” says Neil Chethik, Carnegie Center Director. “They waited impatiently like Harry Potter fans a century later for each episode of The Little Colonel to be published. And the franchise moved merchandise: girls’ shoes, toothbrushes, puzzles, pocketbooks and paper all carried the brand. Even Macy’s had a Little Colonel section in their stores.”

The Little Colonel has a lasting impact thanks in large part to the 1935 film version of the story starring Shirley Temple.

“Recent scholarship casts her work as anachronistic, with a too-charming depiction of the Reconstruction-era south, a depiction that often ignored or discounted issues of race,” says Chethik. “In her time, however, she was a hero to many girls who loved to read, and to women writers trying to get published.”

Johnston established The Authors’ Club of Louisville, a women’s writing group where participants provided constructive criticism and encouraged each other in their writing endeavors. The club launched in the 1890s and continued with weekly meetings through 1915. It had a notable impact on the literary scene, with 70 books published by women associated with the group.

Walter Tevis
As a young boy, Walter Tevis spent more than a year separated from his family when they relocated to Central Kentucky while he underwent experimental treatments for rheumatic fever at Sanford University. His arrival in Lexington eventually inspired his most well-known story, The Man Who Fell to Earth, about an alien who travels alone from a dying planet and lands in Kentucky.

Lexington also inspired his first published short story, which he later expanded into a novel called The Hustler.

“Most of the themes from my writing, I learned in Kentucky,” Tevis said in a 1980 interview with the Louisville Courier-Journal. “I learned to shoot pool in Lexington in the Phoenix Hotel pool room, and I learned to read science fiction there.”

The Hustler, along with its sequel, The Color of Money, became hit movies starring Paul Newman. The Man Who Fell to Earth was also made into a film, featuring David Bowie as the main character in his first starring role.

Tevis continued to publish short stories and novels until his death from cancer in 1984. He died in New York City and is buried in Richmond, Kentucky.

Dr. bell hooks
Born Gloria Jean Watkins, bell hooks was raised in rural Kentucky, near Hopkinsville. She wrote poetry in her youth and received a scholarship to study English at Stanford University. While a student in the San Francisco area in the early 1970s, she was drawn toward the women’s movement, but found that women of color were not welcomed into it.

Her experience inspired her write a book about the history of African-American women and their exclusion from the mainstream feminist movement. She started writing it her freshman year of college, and eight years later, Ain’t I a Woman: Black Women and Feminism was published, and remains an important work on the topics of feminism, racism, and intersectionality today.

She published Ain’t I a Woman under the name bell hooks, after her great-grandmother, choosing all lowercase letters to downplay herself as an individual and put the focus on the substance of her text.

After earning her Master’s and Doctorate in English, hooks was a professor at Yale, Oberlin, and City College of New York and was a sought-after lecturer on the topics of race, gender, and power. She continued to write, publishing 13 books during the 1990s.

In 2004, hooks returned to Kentucky where she became a distinguished professor in residence at Berea College. She created the bell hooks institute there, where she writes, teaches, and hosts conversations on topics relating to race, gender, class, and spirituality.

Returning to Kentucky and being recognized as a Kentucky writer were both mixed experiences for hooks.

“This has been a very difficult moment, because it carried me back to the world of racial apartheid that I was born into in Hopkinsville, Kentucky,” she says. “I could not be here tonight without remembering that we grew up in a culture of fear, a culture completely determined by white supremacy…When I left Kentucky, I left to escape that culture of fear and to fully find my voice.

“Increasingly, the rest of the world, in all the things that I didn’t want to deal with – imperialist, white supremacist, capitalist, patriarchy – was as fiercely there as it was in Kentucky,” hooks continues. “So it was wonderful to be able to come home to Kentucky, to be the Kentucky writer influenced by our life in the hills, to be a person of courage, to be self-determining, and to be a person of love.”

Quoting Dr. Martin Luther King, Jr., hooks says, “’Justice at its best is love correcting everything that stands against love.’ Imagine if you will, a renewed democracy in our culture based on the principles of love and mutuality. Imagine the ways this might change how we organize the shape and direction of our theory and practice.” 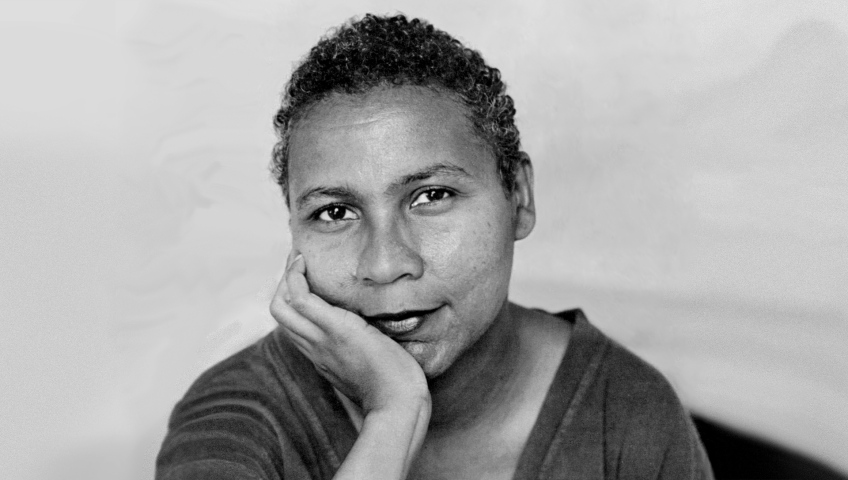