The Benefits of Early Screening for Lung Cancer, Promising New Treatments, and Stories from Survivors

In the third episode of KET’s series Fighting to Breathe: Lung Disease in Kentucky, we examine
new treatments for lung cancer that increase survival rates and explores how low-dose CT scans are saving lives through early detection.

This series is funded in part by grants from the Foundation for a Healthy Kentucky and the Kentucky Medical Association through a grant from the Anthem Foundation.

Kentucky a National Leader in Screening for Lung Cancer

“Lung cancer in Kentucky is a dominant feature in our cancer landscape,” says Dr. Timothy Mullett, MD, a professor of thoracic surgery at the University of Kentucky’s Markey Cancer Center. “The burden that we have is larger than any other state in the U.S. But at the same time, I think we’re beginning to see some new opportunities.”

While the state ranks first in the nation in lung cancer incidence rates, it also ranks second (as of 2021) in early screening for the disease with around 15 percent of eligible patients getting screened vs. 4-5 percent nationwide. Kentucky’s success in this area has helped lower the rate of new diagnoses by 11 percent over the past five years, according to data from the American Lung Association.

“Most lung cancers are diagnosed in the late stage – they’re diagnosed after the patient has already had a cancer that has formed in the lung, has grown and has spread to somewhere else,” Mullett says. “Many years ago, chest X-rays were studied and were found to be ineffective at finding lung cancers when they could make a difference. Well, they started to study something called a low dose CT scan, where the patient receives less than a third of the dose of normal radiation of a CT scan. It allows us to be able to get a scan of the lung, find a nodule, find a spot on the lung that is small.”

If a nodule is found, Mullett says the medical team decides whether they should watch it carefully over time or go ahead and order a biopsy. Even if nothing is found, the scan must be repeated every year.

Only certain patients qualify for the low dose CT scans. Currently, the U.S. Preventive Services Task Force recommends them for patients ages 50-80 who have a tobacco exposure of 20 pack years, meaning they smoked a pack a day or more for 20 years. Patients who have quit smoking and did so within the past 15 years (with a 20-pack-year history) are also eligible for the scans.

Dr. Mullett is a member of the Kentucky LEADS collaborative (Lung cancer Education, Awareness, Detection, and Survivorship), which supports implementing low dose CT scan screening in medical facilities statewide. “We feel a sense of urgency to get more people into (screening), but it’s taken some time to get this into the primary care office,” he says.

One obstacle that must be overcome to boost early screening rates even higher is the stigma that associates lung cancer with smoking, says Mullett. This stigma is based on the disease’s history and its high mortality rates, but he notes the majority of lifelong smokers never get lung cancer and that up to 20 percent of people who do get it never smoked.

One of the most successful lung cancer screening programs in the state – and nation – exists at St. Elizabeth Healthcare in northern Kentucky. In 2022, they reached a milestone of 20,000 screenings.

“I’ve been in primary care for 34 years now, and I’ve experienced a lot of frustration with lung cancer and seen the dismal outcomes – we find it too late,” says Dr. Michael Gieske, MD, director of St. Elizabeth’s screening program. “We’re finding 56 percent of the cancers through the program at Stage 1, where you have a greater than 90 percent chance of cure.”

The early screening program at St. Elizabeth is a collaborative effort between primary care physicians, nurse practitioners, oncologists, surgeons, and patients and it also includes tobacco cessation counseling. Any pulmonary nodule found in a patient via the low dose CT scan is examined by a multidisciplinary nodule review board, which determines the future course of treatment.

Patient Glenna Courtney participated in the screening program and her medical team spotted a quarter-inch tumor after her second low dose CT scan. She had the tumor removed and did not have to undergo chemotherapy or radiation treatment. “I tell everybody I know to go get the scan,” she says. “It’s well worth it, your life will be protected by having it.”

Learn more about St. Elizabeth’s program and its success in this article.

Chemotherapy and radiation used to be the two standard treatment protocols for patients with lung cancer along with surgical removal of tumors if possible. That’s no longer the case, however. New understanding about how cancer cells work on the genetic level has led to breakthroughs in drug therapies that more specifically target the mutating cells, says Dr. Jill Kolesar, PharmD, a research professor in the University of Kentucky’s College of Pharmacy and co-director of the Molecular Tumor Board at UK’s Markey Cancer Center.

“Those mutations in cancer are usually one of two types – oncogenes or tumor suppressor genes,” Kolesar says. “Tumor suppressor genes are kind of like the brakes in your car. If you can imagine your brakes going out, your car goes out of control. And oncogenes are more like the gas pedal – imagine your gas pedal just being stuck down to the floor, again your car goes out of control. Now imagine if you have both of those problems.”

Kolesar says that once a person is diagnosed with cancer and the type and spread is determined, researchers will then conduct genetic sequencing on the tissue. This process will reveal the makeup of oncogenes and tumor suppressor genes in the cancer, which will then allow the medical team to identify the most effective treatment therapy for the patient. For an increasing number of cancer patients, targeted therapy is the best choice.

“Targeted therapies are drugs that are usually oral medications, and they only work on the ‘brake’ genes and the ‘gas’ genes – they go specifically to the cancer, and specifically to those genes,” Kolesar says. Drugs developed to target these mutated genes do not harm normal genes in the affected area, leading to less side effects.

Immunotherapy is another field where rapid advances have been made in recent years, Kolesar says. She explains that cancer cells create an abnormal protein when they mutate. That protein is the sort of warning sign that is usually detected by immune system cells in the body, which then identify and attack the aberrant cell.

Deciding the right approach to treatment – whether through targeted therapy drugs or immunotherapy drugs – is the responsibility of the Markey Cancer Center’s Molecular Tumor Board. Kolesar says the board is made up of a variety of experts including oncologists, pharmacists, and genetic counselors. They receive the genetic sequencing report for each patient, and it may contain dozens of mutations, each of which could have four or five drug options for treatment. It is up to the Molecular Tumor Board members to consult together and develop the best plan for each patient.

The Markey Cancer Center’s board offers its services statewide, and Kolesar says a new analysis has found that patients in Kentucky who received recommended treatment from the Molecular Tumor Board for non-small cell lung cancer have improved overall survival rates compared to patients who had the same stage of disease but did not receive a review from the board. At Baptist Health Hardin in Elizabethtown, oncologist Dr. Donald Goodin, MD, has worked with the board to help patients diagnosed with advanced-stage lung cancer live longer and have a higher quality of life.

“The outcomes with targeted therapies and immunotherapy, some have been quite amazing,” Goodin says. “I’ve seen patients that had their cancers shrink away from one scan to the next, so that there’s dramatic improvement in their disease process, and people that have lived several years off of immunotherapies or targeted agents, so you can almost start to think of metastatic lung cancer as a chronic disease.”

In the summer of 2017, Lindi Campbell began experiencing what she thought was acid reflux, and her primary care physician ordered an X-ray. That revealed a small shadow on her lung, and a CT scan was conducted. That scan revealed a 1.2-centimeter nodule, which was removed in November along with two lobes of her right lung.

After regular scans over the next year and a half, her doctors noticed spots forming in Lindi’s left lung. Biomarker testing revealed a specific genetic mutation was causing the cancer to grow, which Lindi’s doctors believe may have been caused by exposure to radon and/or secondhand smoke. She is now taking a targeted therapy drug daily, which may have to be discontinued if the cancer eventually becomes resistant to it.

Cathy Zion recalls that in 2003, her formerly healthy 75-year-old mother, a non-smoker, was diagnosed with stage 4 lung cancer and passed away six months later. That experience impelled Cathy to look into low dose CT scan screening for lung cancer.

Although Cathy had quit smoking years earlier, she qualified for the scan and paid for it out of pocket. The first result showed a shadow on her lung, and after two more scans Cathy’s oncologist performed a needle biopsy and diagnosed cancer. Seven years ago, she had the left upper lobe of her lung removed and did not have to take chemotherapy.

Steve Tong got married in 2014, and as the year drew to a close his wife told him that his mother had read an article in Today’s Woman magazine (published by Cathy Zion at the time) discussing the benefits of early screening for lung cancer and felt that he qualified for a scan. He was initially reluctant to get one, but eventually accepted his wife’s and mother’s advice and did so.

Steve’s low dose CT scan revealed spots in both of his lungs. Since the cancer had not metastasized, he was eligible for surgery that removed the tumors. Steve believes detecting the cancer early saved his life.

“My hashtag is #anyonewithlungs,” Lindi says when reflecting on her experience with lung cancer, since she had no risk factors for the disease. “That’s one of the biggest messages we’ve got to push through, giving larger and larger platforms to the survivors, because sometimes I feel like we remain in a bubble helping each other. We really need the media and large organizations and even celebrities who are diagnosed really speak up and help us fight this cause.”

Hear more from Lindi, Cathy, and Steve in this full interview.

The Threats Around Us

The Threats Around Us 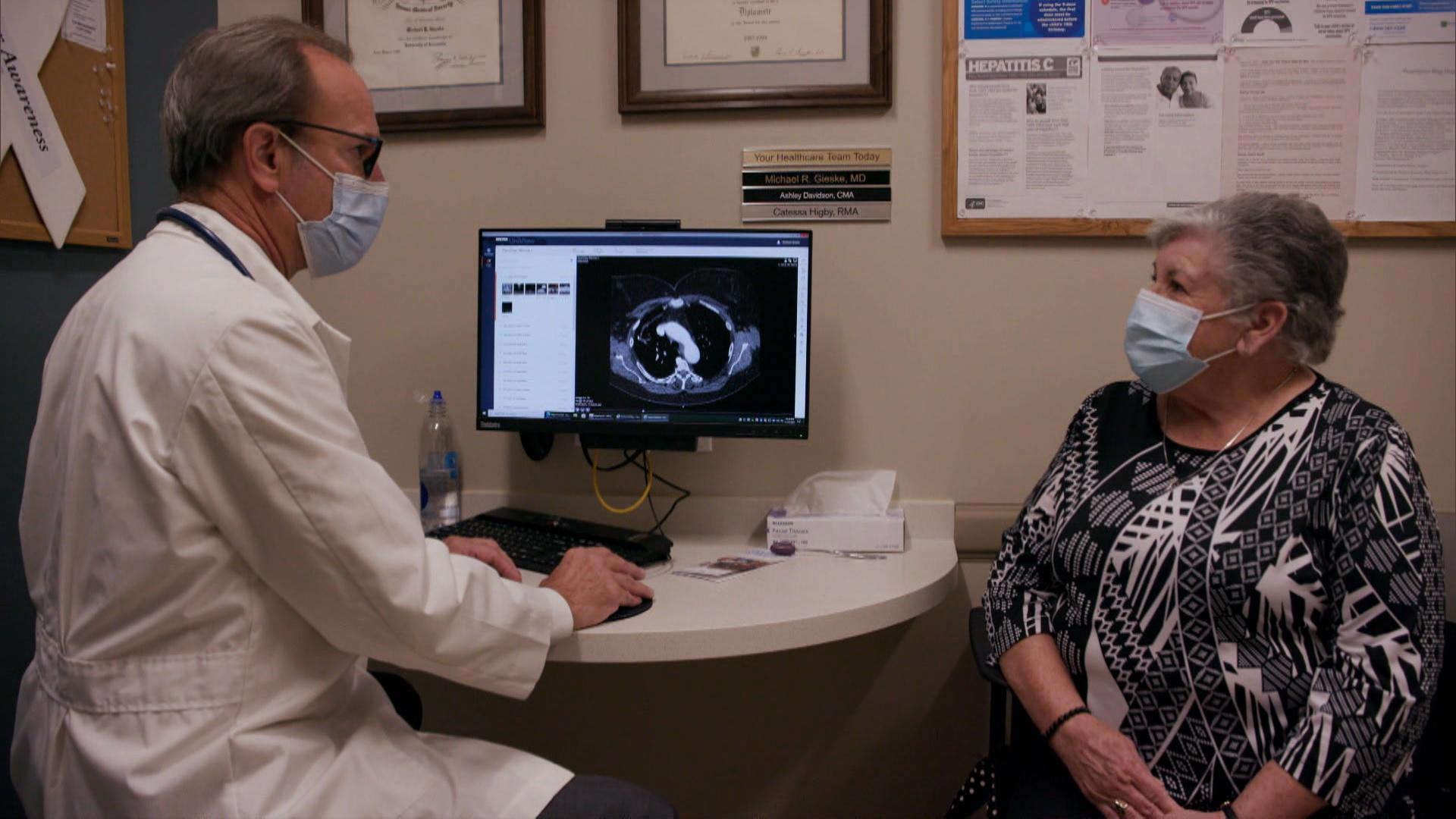