New York Times bestselling author Charles Graeber discusses his book, The Breakthrough: Immunotherapy and the Race to Cure Cancer, that details revolutionary scientific research in immunotherapy, with Dr. Thomas Gajewski, who oversees the melanoma oncology clinic at the University of Chicago and leads the immunology and cancer program at the university's Comprehensive Cancer Center.
Season 20 Episode 7 Length 56:33 Premiere: 02/25/19

Charles Graeber On Immunotherapy and a Paradigm Shift in Cancer Treatment

The quest for finding a cure for cancer stretches back well over a century, and several breakthroughs through the years in radiation, chemotherapy, and other areas have helped extend life and improve the quality of life for millions of people with the disease. Arguably, the most important discovery this century involves immunotherapy, using the body’s own defense system to attack cancer cells. Author Charles Graeber explores this exciting and rapidly-advancing field in his best-selling book “The Breakthrough: Immunotherapy and the Race to Cure Cancer.”

Graeber discussed his book, the way we think about cancer treatment, and the promise immunotherapy holds for future advances in care with Dr. Thomas Gajewski, MD, Ph.D. Gajewski is director of the immunology and cancer program at the University of Chicago’s Comprehensive Cancer Center. The discussion was taped for KET’s Great Conversations at the University of Louisville as part of the ongoing Kentucky Author Forum series.

Dr. Gajewski has been working in the field of immunology for over 20 years. He has seen the transformation of his discipline from one that existed on, as he puts it, the “fringe” of cancer treatment to one that is driving much of the new research and development of clinical trials for cancer. He credits Graeber for summarizing this recent history in his book and for highlighting personal stories of cancer patients who gained a new lease on life through immunotherapy.

“It’s easy to say now – for you, you’ve been holding the torch for 20 years and working at it,” Graeber says. “There weren’t a lot of people who were very interested in this, four and a half years ago, including very many publishers, frankly, because they hadn’t heard of it. It’s the most interesting thing you can imagine.”

Immunotherapy: A “Penicillin Moment” in Cancer Care
Graeber says that researchers were perplexed for years as to why the immune system, which works wonderfully in detecting viruses and other foreign invaders to the body, did not recognize mutated cancer cells and attack them.

For thousands of years, treating cancer was simple, brutal, and generally ineffective, involving basic surgery and cutting out the tumor. Radiation was first tried roughly a century ago. Chemotherapy was shown to destroy certain cancer cells and became the gold standard of treatment for the latter half of the 20th century and into the 21st.

But immunotherapy has been a game-changer. Many scientists assumed that the immune system could not be directed to identify and attack cancer cells, but that turned out not to be the case.

Graeber regards the transformation in rethinking cancer care as akin to the advent of penicillin for use in treating infections during the mid-20th century. In a section of his book after the main text and end notes, he tells the story of Dr. William Coley, who actually applied principles of immunotherapy over 100 years ago, in the late 19th century, after discovering through research that a patient had gone into spontaneous remission after developing an infection at his tumor site. Coley applied bacteria to another cancer patient with success, but the advent of “Coley’s toxin” would not catch hold in the medical community at large, and radiation soon became the dominant method of treatment until chemotherapy was introduced in the 1940s.

Still, Coley’s treatment served as an inspiration for others to keep researching the immune system and cancer through most of the 20th century. Gajewski says that since immunology touches so many areas – infectious diseases, organ rejection, vaccine development, and so on – he and his colleagues always received financial support for research, even if their focus was usually not on cancer. But roughly 15 years ago, immunologists made a breakthrough in understanding how cancer cells de-activate the immune system’s response through the production of specific protein-carried antigens.

“Sometimes, profound changes are upon us and we don’t realize it until far, far later,” Graeber says. “We look back with the perspective of history and time and we say, ‘Wow, everything changed right there.’”

Explaining Immunotherapy Using Narrative and Metaphor
Unlocking handcuffs. Removing the brakes. Exposing a secret handshake. Unleashing an army (of T-lymphocytes or killer cells). Playing the Pac-Man video game, eating up dots. These are just several of the numerous metaphors Graeber (and Gajewski) bring up during their discussion.

Using metaphor was essential for Graeber to break down a highly complex and fluid physiological interaction and make it understandable to the reader.

The “secret handshake” metaphor is a good way to summarize recent medical breakthroughs in immunotherapy, Graeber says. “Cancer has a secret handshake it uses to tell T-cells, immune system cells, ‘I’m cool, I’m a body cell, don’t attack me, stand down.’ And the immune system is filled with these secret handshakes and trip fuses and checkpoints because it’s so dangerous… There’s a constant feedback with this symphony of chemicals going back and forth, and we’ve figured out to block the handshake.”

Gajewski agrees with the metaphor, saying that it illuminates a change in thinking about the immune system’s role in fighting cancer. Formerly, many researchers were focused on finding a way to marshal the immune system to isolate and attack cancer cells – thinking proactively, or playing offense, to use a sports metaphor. But the transformative moment happened when they realized that the immune system’s defense was being suppressed by cancer cells, and this “secret handshake” between cancer cells and T-cells needed to be identified and eliminated.

“Instead of pushing on a positive, now we’re blocking negatives,” Gajewski says. “And the most successful therapies in general have addressed what we call immunologic checkpoints, where there’s a pause in the immune system response, it shuts down temporarily, and once those have been uncovered, two of the most successful drugs we’re using are blocking those negative regulators.”

Graeber says that he thought he had an understanding of how the immune system worked when he set out to write his book, but as it turned out, his knowledge was about as up-to-date as the 16mm educational films he and his classmates watched decades ago in science class.

“I really had to start from scratch, and explain it the way that I would want to hear it,” he says.

To help do this, Graeber organized his book around stories from individual patients who have undergone clinical trials for immunotherapy – some with success, and some without. His goal at the end of the book is to have the reader “accidentally learn cancer chemotherapy.” Gajewski feels that this structure will be especially appealing to persons who themselves are undergoing, or considering, immunotherapy. That group of people will grow exponentially in the years to come, both Graeber and Gajewski believe.

Many people may have first learned about immunotherapy about three years ago, when former President Jimmy Carter received that treatment along with surgery to treat his stage 4 melanoma, which went into remission. Graeber wanted to present a far broader history and contemporary evaluation of this innovative treatment, but he also says, “At the same time, it was important to make clear that it doesn’t work for everybody.

“This works in a minority of cancers, for a minority of patients,” he continues. “But that minority is still a heck of a lot of people, and researchers are increasing that number, and trying to figure out why the other ones don’t respond, and it’s getting a little better, and they’re figuring out a little more each year.”

Where Will These New Therapies Lead?
Graeber says that there are currently FDA-approved immunotherapy drugs for roughly 14 types of cancers, but there are around 3,200 drugs in the clinical trial pipeline. The current environment is “like a tsunami,” he says.

Gajewski agrees, adding that he is seeing some drug companies and researchers pull back on the number of trials they are pursuing and instead devoting their resources toward more specific, evidence-based development goals. Still, Gajewski says that some clinical trials date back to more than eight years ago, with patients’ tumors not returning.

“The ‘C-word’ used to be cancer,” he says, “and now the ‘C-word’ is, will some of these patients with terrible metastatic cancer actually be cured?”

Both Graeber and Gajewski envision a future where many cancers become manageable chronic diseases, if not ones that can necessarily be cured outright. They encourage the audience to continue donating toward organizations such as the Cancer Research Institute – which was in fact co-founded by Dr. William Coley’s daughter Helen Coley-Nauts in the 1950s – to help fund innovative research.

“That investment in biotechnology, biomedical research, it pays dividends in terms of these new therapies,” Gajewski says. “Also, dollar-for-dollar, it turns out that for society, the math has been done by statisticians, by economists, and so on – it way more than pays for itself.”

The early successes of immunotherapy drugs such as checkpoint inhibitors have been beyond encouraging; they have been revolutionary. But what’s even more exciting is that our understanding of how the body’s immune system can fight cancer is still primitive, Graeber says. His book documents a paradigm shift that the author believes will lead to even more transformational discoveries and applications.

“That’s one thing I wanted to be careful with in the book,” Graeber says, “to say this isn’t the end. But to paraphrase Winston Churchill, it may be the end of the beginning. The turning point is really the thing to mark.”

U.S. Congressman John Lewis is turning to the graphic novel format to discuss the Civil Rights Movement with "March", a vivid first-hand account of his lifelong struggle for civil and human rights. Congressman Lewis is interviewed by MSNBC's Rachel Maddow. The interview was recorded at the University of Louisville Kentucky Author Forum. 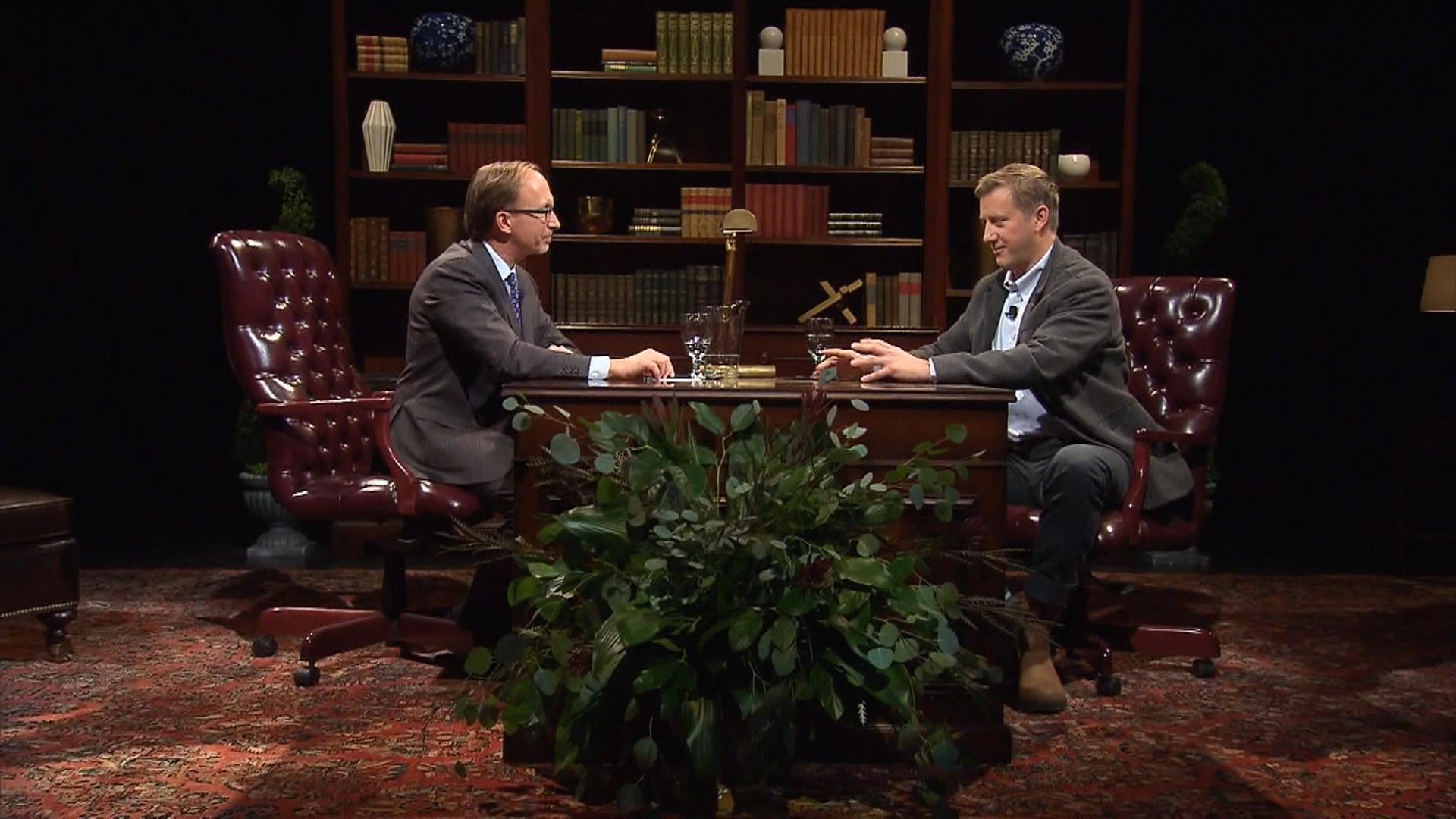