Buzzfeed's Isaac Fitzgerald interviews Colson Whitehead about his book, "The Underground Railroad," chronicling a young slave's desperate bid for freedom, and a heroine's flight that serves as a powerful meditation on both history and the present day.
Season 19 Episode 2 Length 56:33 Premiere: 01/16/17

[Editor’s note: It was announced April 10, 2017, that Colson Whitehead won the Pulitzer Prize for fiction for his novel, “The Underground Railroad”.]

Author Colson Whitehead recalled as a child when he first understood that the Underground Railroad was not a real railroad, but a network of safe stops for African-American slaves to escape to the North. As an adult 16 years ago he mused upon the idea of a real underground railroad as the premise for a novel. But he didn’t think he was ready to write it then.

“I knew if I tried it then I would mess it up. In terms of who I was as a writer, as a person, I was a little bit immature.”

Winner of the National Book Award, Whitehead’s “The Underground Railroad” chronicles a young slave’s desperate bid for freedom on a real underground railroad. Whitehead was interviewed by Buzzfeed’s Isaac Fitzgerald on Dec. 5 for the Kentucky Author Forum. The program was taped at the Kentucky Center for the Arts for KET’s Great Conversations.

The book takes place in 1850 and follows a young girl named Cora as she escapes slavery in Georgia via a real underground railway. As she moves from state to state, “she enters alternative America, alternative history of how things might have been, what still could be,” Whitehead said.

To prepare to write the book, Whitehead said he re-read “One Hundred Years of Solitude,” the landmark novel of magical realism by Gabriel Garcia-Marquez. “The way he deals with fantastic elements in that book are useful in parts of ‘The Underground Railroad,’” he said. Slave narratives like those of Frederick Douglass and Harriet Jacobs, who spent years in an attic in North Carolina waiting for passage, also inspired him.

Another inspiration was “Gulliver’s Travels.” “It borrows from that old structure that goes back to the Odyssey, of the hero going on a journey through a series of allegorical episodes, state to state, adventure to adventure, trying to get home,” he said. “In case the case of Cora, trying to escape.”
Whitehead said he didn’t base the alternative histories on actual state histories. For example, “I’m not drawing from South Carolina history in particular for that section. It really is an alternative creation drawn from different parts of history that aren’t necessarily tied to South Carolina,” he said.

Fitzgerald continued, “But are tied to us as a nation, and also to humanity as a whole, this idea of sterilization,” Fitzgerald said. “So you take on this magical realism and you’re taking on these very real concepts but you’re using them in these different ways.”

Whitehead noted that the book is not a historical novel. “I guess my motto is that I won’t stick to the facts, but I’ll stick to the truth,” he said. “I have a very realistic Georgia plantation then I go to the more fantastic South Carolina, alternative North Carolina, I’m playing with history and time, for example, to get to a larger truth.“

Whitehead said he wanted to create a larger conversation about oppression. Fitzgerald said Whitehead’s depiction of Cora’s attic was intense. “When Cora got out of that attic, I breathed a sigh of relief,” he said. “For myself as a reader, there was just a claustrophobia to reading those sections.”
Fitzgerald noted that the book is a suspenseful read. “You’re talking about such large themes. But I mean, really, I just read it so quickly because it’s such a page turner too,” said Fitzgerald.

At the beginning of the book, the reader learns that Cora’s mother has escaped slavery, abandoning her daughter. “There are elements of this book of a coming of age [story],” Fitzgerald said.
Whitehead said a traditional coming of age novel has a young person becoming an adult. “With this book you have an object becoming a person. A slave is an object, a tool, has no agency, is not recognized as a human being in the slave system,” Whitehead said. As she journeys north, he said, she becomes a real person who tests her ideas of herself and freedom.

Confronting Slavery
Whitehead said the key difficulty with writing this book was in confronting the material. “Part of putting off the book for 16 years was not wanting to address slavery. It’s just so huge and sort of terrifying, I think,” he said. As a writer, he said he had not put his characters into such terrible situations before.

“They’re just characters. But if just you think about the 10 million people who actually went through the system, my anonymous ancestors who lived and died in Kentucky, Florida, Georgia, I don’t know, they lived and died in the void of slavery. And I can trace my family history back about a hundred years, but before that, I have no idea what their slave experience was.”

He read slave narratives and research collected in the 1930s. “The hard part was just realizing, contemplating the true face of slavery in that kind of meaningful way that you have to [in order] to make a story about it.”

Fitzgerald said confronting those horrors daily in writing sounded like something an author would want to abandon. Whitehead said that’s why he delayed writing the book for so long, but he ultimately felt compelled to return to it. “You should do the book that scares you, scares the crap out of you,” he said. “If you’ve been putting it off for so long, why are you putting it off? And maybe that’s something to look at.”

Cora’s antagonist is the slave catcher Ridgeway and his band of bounty hunters. “Because the book is being rebooted every 60 pages as she goes to a different state, there’s a big cast,” Whitehead said. “And so I get to look at different aspects of slavery,” from slave masters to abolitionists to people who were indifferent to the issue.

In the book, Whitehead created a relationship between Ridgeway and a child named Homer, a freed slave who decides to join Ridgeway in his slave catching. “The master-slave experience is really complicated,” he said. “There were slaves who after the Civil War stayed on the plantation and worked for the masters for free because they have no idea what else to do. … There are slave masters who would swear that they love — ‘I love my slaves’ –- you know, beat, rape, torture them -— ‘But they’re like family, Bessie’s like family.’

“So that’s a complex corner of that experience. So Homer and Ridgeway’s dynamic hopefully illustrates a corner you don’t necessarily think about.”

Language of Oppression
At one point Cora arrives at a cooperative farm where runways find safety, modeled upon utopian communities of the day. “There were separate black towns. … But really I was trying to think of what is the best case scenario for free people in 1850,” Whitehead said. “On the farm, abolitionist thinkers and artists come by and debate the issues of the day, their next move, and the future of the black race. Many of the issues debated then are still debated in much the same language today,” Whitehead said.

“The language of former slaves describing the slave patrols is the same language I would use to describe ‘stop and frisk’ now,” he said. “And I’ve been stopped and handcuffed and interrogated by police. So guess what, being oppressed by law enforcement in 1850, when you’re just minding your own business, some people demand your I.D., whether you’re a free person or a slave, and now, if you’re walking down the street and stopped by a cop and you have to show your I.D., whether you’re an 18-year-old or president of the United States and Trump is demanding to see your birth certificate, you know, let me see your papers,” he said. “The language you use to address those humiliations is the same.”

Fitzgerald said “The Underground Railroad” was particularly needed in 2016. Whitehead said that when the book came out in August 2016, he talked about parallels in the use of hateful language between the 1850s and extremists today. “On the one hand, my daughter, who is 12, only really knows a black president. And the black president is followed by a white supremacist president. And that process, you know, America. We make advances, we retreat, we move a little forward and back,” he said.

Fitzgerald asked if Whitehead had advice for artists in the Trump era. Whitehead replied that people have asked him if his work as an artist is political. He said he has many interests, and he believes artists should do the work they feel called to do. “But if you feel you do have to address what is going on as an artist, it’s a challenge, and it does give you that sense that you’re doing something.”

Wanted Ads
In his book, Whitehead inserted actual classified ads from North Carolina newspapers in 19th century for runaway slaves. Slavery touched everyone, he said, from the man whose job it was to typeset the ads to the man who made nails for houses in new communities built on the cotton industry. The ads, Whitehead said, represent the idea that everyone was touched by the system of slavery.

“As a writer I like making things up, that’s the fun part,” he said. “But I couldn’t really beat the sort of succinct, terse language of these ads.” Four of the ads are real slave ads, but Whitehead said the ad about Cora toward the end of the book is made up. Whitehead said he saw the ad as his gift and tribute to Cora.

“It sort of breaks the walls of the fiction, which is me, Colson, talking to her, but I wanted to– it comes after various things that happened to her, and I wanted to make it as a gift from me to her.” 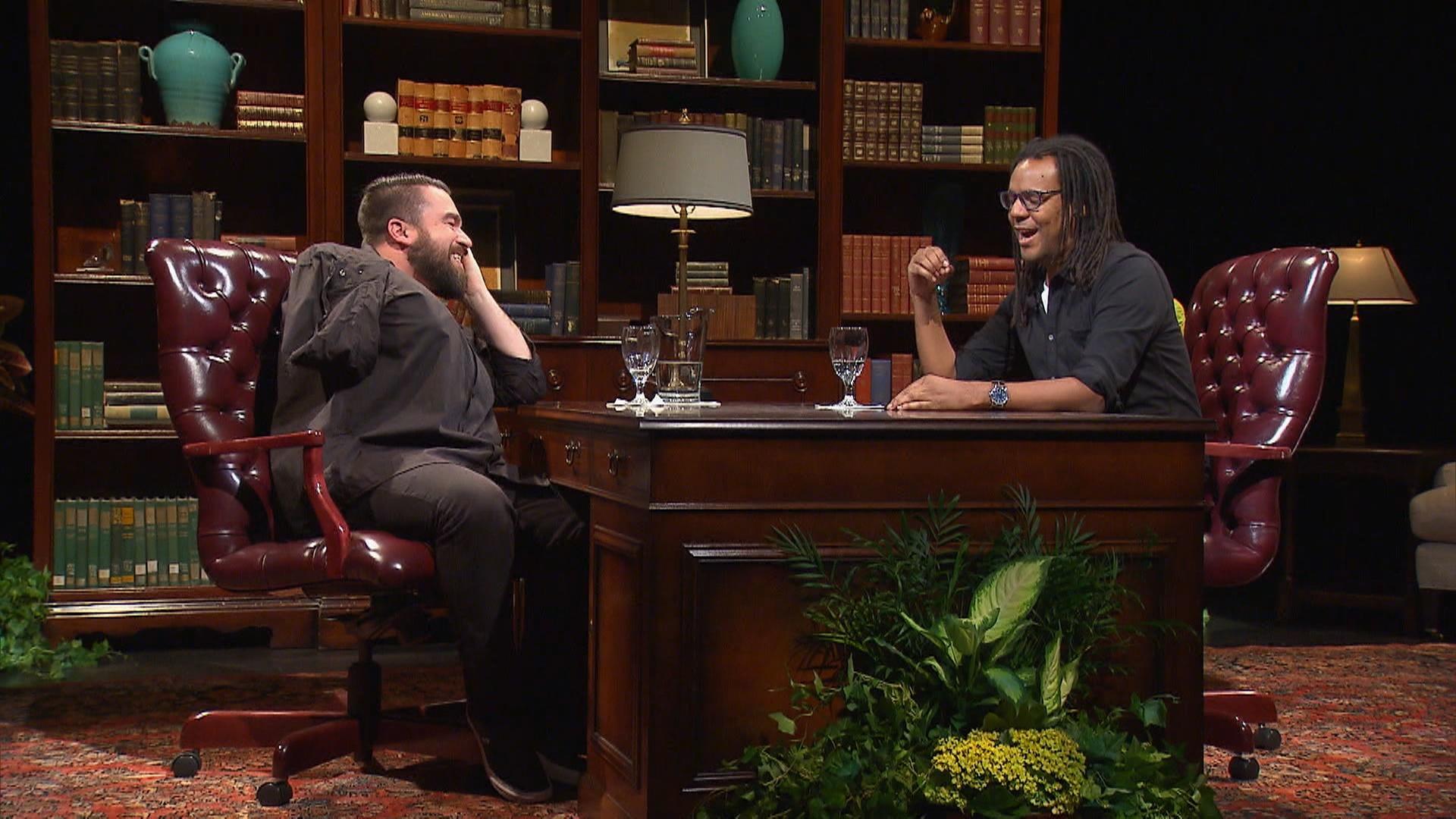