David McCraw, deputy general counsel at The New York Times, discusses his book Truth in Our Times: Inside the Fight for Press Freedom in the Age of Alternative Facts, with MSNBC legal analyst Chuck Rosenberg, formerly with the Department of Justice. The interview was recorded at the University of Louisville Kentucky Author Forum.
Season 20 Episode 10 Length 56:33 Premiere: 07/01/19

David McCraw, the deputy general counsel of The New York Times, examines the challenges of protecting the First Amendment for the 21st century in his book “Truth in Our Times: Inside the Fight for Press Freedom in the Age of Alternative Facts.” McCraw was interviewed in spring 2019 by Chuck Rosenberg, former acting head of the Drug Enforcement Administration and a United States Attorney and a current MSNBC legal analyst. The event was taped by KET for its Great Conversations series at the University of Louisville Kentucky Author Forum.

McCraw grew up in small-town Monticello, in central Illinois, and became interested in journalism during his youth, motivated in part by the press’s coverage of corrupt public officials in the state. McCraw worked as a journalist after graduating from college. He entered law school in his early thirties and found his true passion: defending the rights of a free press to report on news in the public interest.

Regarded by his colleagues as a “raging moderate” when he joined The New York Times’ legal team, McCraw says that adopting a reserved, methodical, and unbiased approach to both practicing and protecting journalism has been an asset through his career. Rosenberg, former U.S. Attorney in both Texas and Virginia, agrees: “In my years as a prosecutor, we were studiously nonpartisan – the idea was to never pick sides, you follow the facts and apply the law. It’s not that different than being a journalist.”

“The question of bias is hard,” McCraw says, “but in any profession, whether it’s the law or journalism or something else, you acknowledge what your prejudices are, and I think professionally, you try to work around them.”

Here are three key takeaways from McCraw’s and Rosenberg’s discussion:

Bolstering Legal Protections for a Free Press
McCraw discusses several landmark U.S. Supreme Court decisions in “Truth in Our Times” that have strengthened the rights of news organizations to pursue facts and publish reports independent of outside influence. For roughly a 25-year span, most Supreme Court decisions involving the press reaffirmed First Amendment rights, starting in 1964 with a unanimous 9-0 decision in New York Times vs. Sullivan.

McCraw says that decision “revolutionized press law in this country and really set a standard you won’t find anywhere else in the world.” It arose when a local police commissioner in Alabama sued The New York Times for libel over an ad in the paper. The ad was bought by supporters of Dr. Martin Luther King Jr., and accused the police force, and others in the South, of abuses. The U.S. Supreme Court ruled for The New York Times and “set the standard of actual malice,” McCraw says. “Even if a newspaper gets a story wrong about a public figure or public official, even if it hurts that person’s reputation, that official would have to prove that the story was done with reckless disregard for the truth.”

Another landmark ruling occurred in 1978 – Landmark Communications Inc. vs. Virginia. In that case, a Virginia newspaper reported that a state judge was facing a disciplinary hearing, and the state sued based on a statute in Virginia that prohibited the press from publishing the name of a judge under investigation. The Supreme Court ruled in a 7-0 decision with two recusals that the First Amendment protects the free press from punishment for reporting true information.

“And that started a whole series of Supreme Court decisions that come back to that theme,” McCraw says, “that if a newspaper, or a news organization gets truthful information and publishes it, and have not engaged in any wrongdoing to get that information, then the First Amendment protects them.”

McCraw examines the impact of these court decisions in the first part of his book, which also recounts The New York Times’ decision to publish three pages from Donald Trump’s 1995 tax returns after they were sent anonymously to the paper in October 2016, while he was still the Republican candidate for president. McCraw says The Times journalists were very thorough in investigating both the documents themselves and pursuing leads on who may have sent them to the paper, leading McCraw and his attorneys to support The Times’ decision to publish.

“The Supreme Court has said it over and over again: truthful information, which we did nothing wrong to get, it just showed up in the mail, and is in the public interest – we have the right to publish that,” he says.

Rosenberg asks McCraw if the protections afforded The New York Times and other traditional news organizations through decisions such as Landmark also apply to a self-publisher on the Internet.

“I think that the answer is, it’s probably foolhardy to try to figure out who’s a journalist, but it’s probably important to figure out who is committing an act of journalism,” he continues. “So if someone is reporting on something, if someone is gathering information and conveying it to a larger public and it has public interest, I think the First Amendment should protect that individual, even if the individual is not getting paid, and doesn’t look like a traditional news organization.”

‘Fake News’ Accusations Leading to a Loss of Public Trust
Even though legal protections for a free press remain strong, McCraw believes that news organizations such as The New York Times and The Washington Post are currently in a precarious position. Constantly, they are being challenged by accusations of bias, and even of deception, by individuals and organizations who — thanks to the accessibility of the Internet and digital technology — have their own communication outlets to use as a platform.

“The point I’m making there is that it doesn’t really matter how much freedom a press has if it’s not believed,” McCraw says. “If there is disbelief, then that press will never be able to mobilize public opinion to be a check on government the way it is supposed to be.”

While writing his book, McCraw came across a poll by Ipsos examining public attitudes toward the press. The poll found that 26 percent of respondents believe the president should have the power to close down a news organization that misbehaves.

“That is really a far, far drift – one in four citizens – from what the framers had in mind,” McCraw says. He states that all institutions indeed deserve public scrutiny, and that the press should be criticized if its reports turn out to be biased, or worse, untrue. “But the idea that the balance of power should be struck like that is very troubling,” he says.

McCraw recalls a phrase used by the 20th century German philosopher Hannah Arendt that was cited in a column by one of his colleagues – “the vacuum of unthinkingness.” He believes that the constant barrage of accusations against the free press by people from President Trump on down are threatening to create such a vacuum in the United States. When people don’t believe institutions are trustworthy anymore, they become disengaged, he argues.

“The problem – and maybe you could think of it as the evil genius of calling something fake news – is that it sounds like something that someone who is pursuing the truth would say,” McCraw says. “When it’s just the opposite. It is an invitation to label and dismiss rather than to read and discern.”

Challenges to Press Freedom at Home Have Global Repercussions
The erosion of press credibility in American society is contributing to a worldwide assault against free speech, McCraw says. He reveals that New York Times reporters receive threats regularly – in the U.S., but also overseas where the threat of kidnapping is always a concern. McCraw discusses his experiences working with the family of Times reporter David Rohde in 2008-09, to help extricate him from captivity after he was captured by the Taliban in Pakistan. Rohde escaped after seven months.

The current climate is even worse for U.S. journalists, McCraw says, than it was during the first decade of the 2000s. Foreign governments do not feel an obligation to provide access to the U.S. as they did in years past, and McCraw believes that some of them believe that they can even curry favor with the U.S. government by criticizing the American press.

“I will say that the Trump administration has been very active in helping get the release of Americans who have been held hostage, and they deserve credit for that,” he adds, “but the environment they have created in many countries, it’s really quite detrimental to all of us. If our reporters can’t work there, we’re simply not going to know what’s going on in the world.”

When asked by Rosenberg if the current international backlash against press freedom is a “blip or a trend,” McCraw reminds him and the audience that “Truth in Our Times” offers a hopeful conclusion.

“I’m going to say blip, but I’m going to remind people that the book is a tribute to unfounded optimism,” he says. “I think that every government legitimately is attempting to figure out how to exist in an Internet world, and I get the pressure they feel they’re under. But my hope is that ultimately, even in countries that have authoritarian governments, the will of the people still matters. 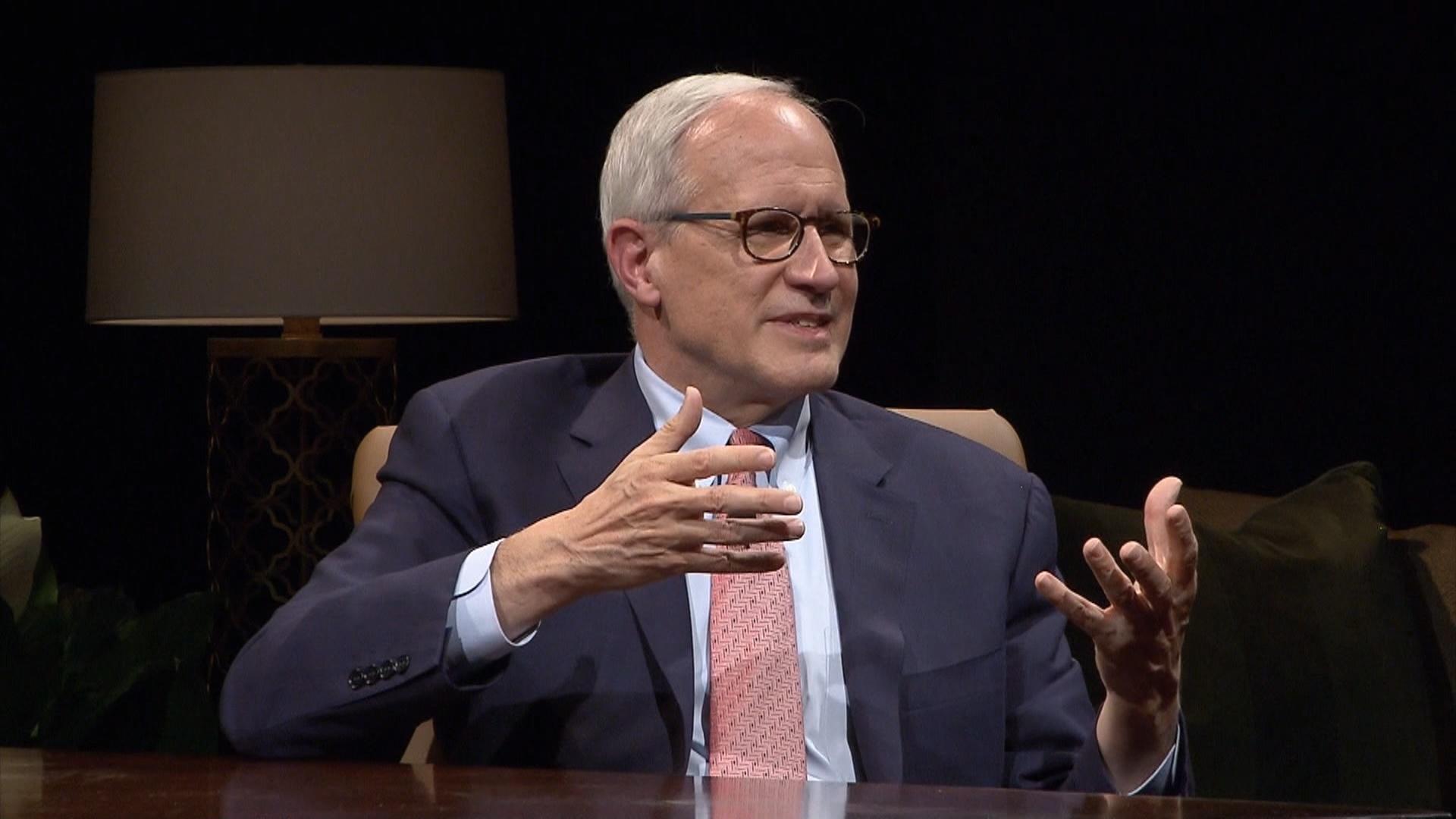