Russian-American journalist Masha Gessen talks about her new book The Future Is History: How Totalitarianism Reclaimed Russia - winner of the 2017 National Book Award for nonfiction. She is interviewed by Clarissa Ward, a CNN senior international correspondent.
Season 20 Episode 2 Length 56:32 Premiere: 02/05/18

Masha Gessen is a Russian-American journalist and the author of a new book, The Future Is History: How Totalitarianism Reclaimed Russia, winner of the 2017 National Book Award for nonfiction. Gessen was interviewed by CNN Senior International Correspondent Clarissa Ward at The University of Louisville’s Kentucky Author Forum.

For many Americans, it can be difficult to understand what it’s like to live in Vladimir Putin’s Russia. Gessen describes his regime as “a Mafia state built on the ruins of a totalitarian regime.” She explains what totalitarianism is, and what it isn’t.

Totalitarian rule is the opposite, pushing citizens to eliminate their private lives and put their full support behind their government. Gessen describes the Soviet Union as the longest-running experiment in totalitarianism. Putin brought elements of that society back when he began a campaign of arresting protesters around the time of his 2012 election.

Russia After the Soviet Union
Gessen counts herself among the Moscow intellectuals and western journalists who felt optimistic about Russia’s future after the collapse of the Soviet Union, a hopeful outlook that turned out to be wrong. In her book, she examines how the entrenched Soviet culture worked against a true democracy taking hold in Russia.

“It’s useful to think of society as a person,” says Gessen. “When a person has been abused for many years, and that person is removed from that situation of abuse, we don’t tell that person go and lead a happy, healthy life; be psychologically sound. We know that’s impossible. We know there’s trauma, and we know that person needs care and attention and treatment, and even then, it’s likely that they will reproduce the situation of abuse. Societies in that sense are like people. Societies will reassemble around an authoritarian or totalitarian leader. They will willingly cede their agency. Because it is absolutely terrifying to try to reinvent yourselves.”

According to Gessen, Russia missed an opportunity to build a post-imperial identity for itself after the fall of the Soviet Union. Instead, it held on to its previous identity as a great empire, now severely diminished. That became a source of resentment which Putin was ultimately able to use to his advantage.

“The other thing that didn’t happen was there wasn’t a reckoning with the past,” says Gessen. “[Russian President Boris] Yeltsin quite intentionally scuttled the trial of the Communist party and any effort to really open the archives and have some sort of truth and reconciliation commission. Yeltsin immediately in 1996 declared ‘Reconciliation Day,’ without the truth part.”

She adds that other post-Soviet countries had the ability to point to Moscow and Soviet occupation as the source of bad things in the past. Russia’s history didn’t allow for such distinctions between victims and perpetrators.

“The point of the totalitarian regime is to make everyone complicit, turn everyone in to an enforcer,” Gessen explains. “The central historical story in the book is the story of a woman…who gave up her husband, made herself a widow, and lived with the grief for the rest of her life. This is the perfect example of someone who became a victim by becoming a perpetrator. Imagine the process of reckoning. I can’t imagine the country that says, ‘We did this to ourselves.’ Every family has victims and perpetrators and often there are the same person. We don’t know who can beg forgiveness of whom. We’re all culpable.”

Putin’s Rise
With the new freedom that came in the 1990s, Russians were able to travel abroad and were often shocked by what they saw beyond their borders.

“People went abroad and they realized how poor they were,” says Gessen. “Even the not very well-off people in poor European countries lived much more comfortable daily lives than Soviets who thought they were pretty well-off. That was so insulting because Soviet citizens thought of themselves as living in a technologically advanced country. And there they were; it was tangible, all the things they had been denied. And so that was a source of shame. And Yeltsin, as a representative of that poor, backward Russia, was also a source of shame.”

Gessen says that Putin was able to ride the wave of resentment to his position of power. He appeared as an anti-Yeltsin: sober, serious, styled in a European manner. He used the post-Soviet feeling of diminished power to his advantage.

“He trafficked really effectively in the nostalgia that had taken root,” Gessen says. “He talked about all the feelings of resentment that Russia had become smaller by losing all of its Soviet colonies…and the feeling that Russia could no longer feel itself to be a great power in the world.”

Even today, there are many Russians who give Putin credit for restoring stability. Gessen describes this as both an illusion and a lie.

Putin came in to power in 2000, a time that coincided with the beginning of an oil boom that brought prosperity to the country.

“Everybody’s life got at least a little bit better,” says Gessen. “Putin could point to that and say that he was bringing stability to the nation. That was the illusion part. The reason I say it’s gone from being an illusion to being a lie is that as the incredible economic prosperity began to slow down, corruption increased. Laws are passed in such a way that everyone is outside the law at all times, which is a very Soviet approach. In the Soviet Union, everything was banned, so everyone’s an outlaw. And then you were always terrorized, because you could never predict when you were going to get arrested, because you were always outside the law.

“So now Russia is basically in the same situation, especially for anybody who’s in any kind of business enterprise,” Gessen continues. “They’re always outside the law. A restauranteur is outside of the law if they’re paying cash at a farmers’ market for produce. It’s illegal to pay cash for produce; you have to pay through Bank Russia. That places most of the country in a position of extreme instability, but under the slogan of having restored stability.”

Putin’s reign has lasted longer than any Russian leader except Joseph Stalin. Gessen believes that he won’t willingly cede power because he can’t do so without risking his own personal future.

“At this point he just wants to hold on to power because he has no choice,” she says. “Peaceful retirement is not in store for him. He understands that he will be prosecuted if he ever wants to retire. He’s in a classic dictator’s dilemma. He’s informationally isolated. Even if he appoints somebody to hold his place, he will not be able to trust that person.”

Parallels Between the U.S. and Russia
Gessen’s book was completed before the 2016 presidential election in the United States, but in hindsight, the author believes are parallels between Putin and President Donald Trump. However, Gessen emphasizes that the two men have as many differences as they do similarities.

“They’re emotionally really different,” says Gessen. “One is raw emotion, while Putin actually prides himself on never betraying emotion, which is also not true, but that’s his self-image. They come from vastly different cultural backgrounds and political legacies and they deal with very different societies.

Gessen adds that most Russians were fully aware that there were Russian troops in Ukraine, even while Putin maintained otherwise. But they bought into the idea that those troops were there fighting a culture war against American troops, specifically one in which Western powers were trying to spread gay culture.

“I don’t even think it’s exploiting homophobia, because it’s not like Russians were so terribly homophobic before and Putin just tapped into this dormant aggression,” says Gessen. “It’s a different mechanism. It’s appointing a scapegoat minority. LGBT people make the perfect minority, and this I think is relevant to [the U.S.] as well, because we’re seeing this happen. When Putin started queer-baiting the protesters in 2011 and 2012, he immediately communicated that the protesters were ‘other.’ They were foreign. They had to come from America.

“This serves as Putin’s shortcut to, ‘I can take you back to an imaginary past in which you weren’t confronted with things that make you uncomfortable,” Gessen continues. “And that’s exactly what Trump does when he talks about making America great again and when he starts reversing advances in LGBT rights in this country months after wrapping himself in a rainbow flag. That’s the logic of trafficking in that kind of nostalgia for the imaginary past.”

The Future is History
In her book, Gessen interviewed four young Russians and four Russian intellectuals. The title for the book came in part from a phrase that all of her subjects used when describing Russia in the late 1990s: budushchevo net, which translates to “There is no future.”

“It means, ‘I can’t imagine the future for this country or for myself,’” Gessen says. “And I thought, what does it tell me about this language that it has an actual phrase for a lack of a vision for the future, and that people fire off that phrase with such readiness?” 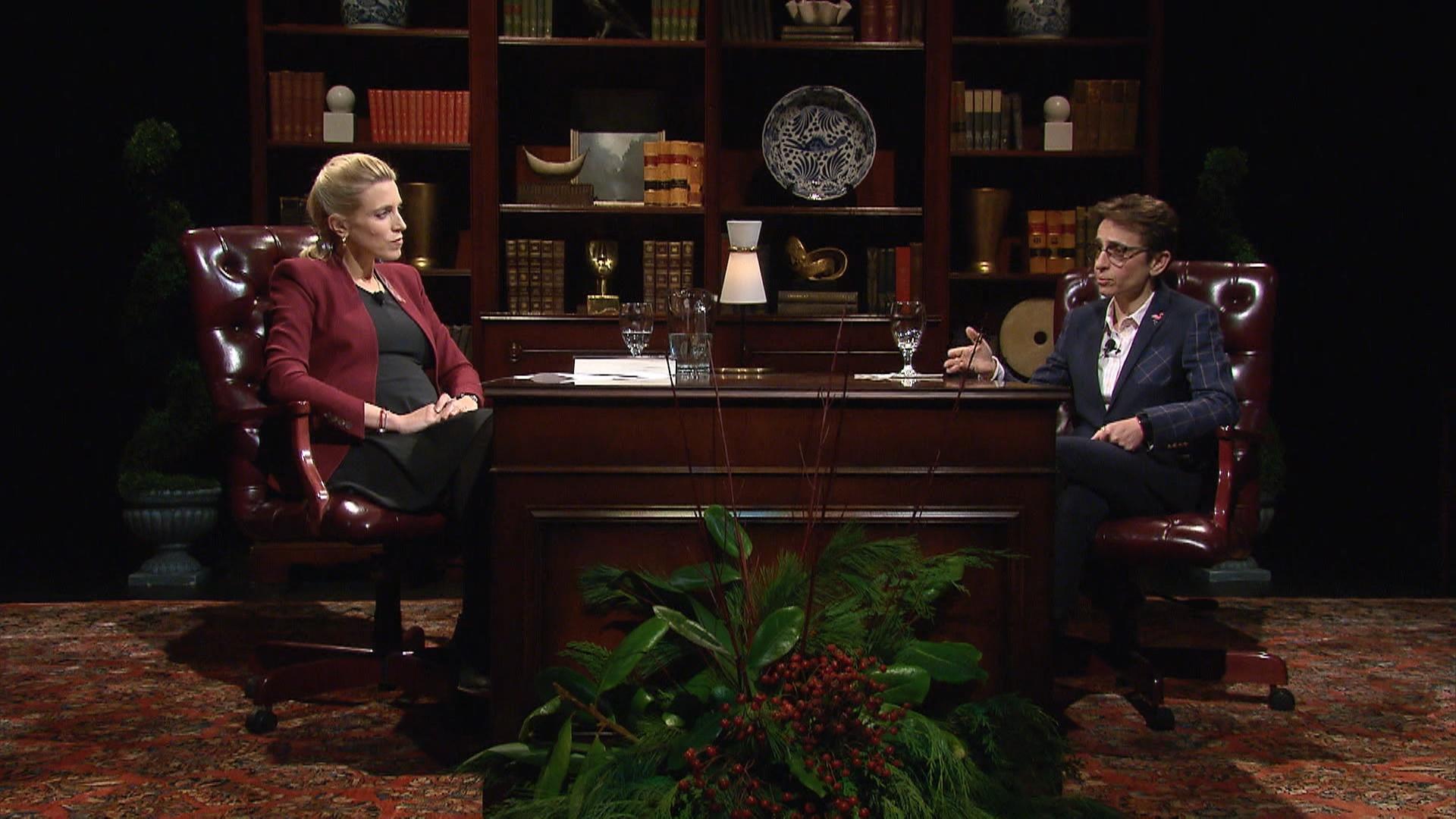