Against the backdrop of COVID-19 and protests opposing systemic racism, host Renee Shaw and experts present the science of childhood trauma and the path to healing. Funded in part by the Foundation for a Healthy Kentucky.
Length 58:03 Premiere: 08/10/20

“I learned to call myself bent and not broken because I believe that what I’ve been through has made me a stronger person,” Pohlgeers says. “Now I realize I can handle anything that life throws at me.”

Just over 25 percent of Kentucky’s children have experienced multiple adverse childhood experiences, also known as ACEs. Now a growing body of research is revealing how prolonged exposure to stress and trauma can impact a child’s long-term physical and mental health, which can have serious implications for the nation’s schools, businesses, prisons, and health care system.

The Effects of Perpetual Stress

Humans have evolved an amazing series of physiological responses to sudden threats in our environment. In lightning-fast succession, your adrenal glands flood your body with the hormone cortisol, which prepares your eyes, heart, lungs, and muscles to fight the threat or flee from it. Once the danger has passed, your brain directs another series of processes to return your body to its normal, calm state.

“You need to have that fight-or-flight mechanism as a safety mechanism,” says Timothy Ainger, assistant professor of neurology at the University of Kentucky College of Medicine. “When it’s not good is when it becomes maladaptive and you live in an environment that’s perpetually causing you to be stressed out.”

Even when people think they’ve developed ways to handle stress, Ainger says they’re probably just fooling themselves into becoming more comfortable with the stress. In recent decades, doctors have come to realize that a long-term stress response – the tensed muscles, the elevated heart rate and blood pressure – can lead to significant health impacts later in life. Ainger says the individual is at greater risk of heart disease, digestive issues, and auto-immune disorders.

Chronic stress is especially difficult for children. Not only are they at risk for later health problems but they are also likely to develop behavioral issues, which can impact their ability to learn at school, hold a job, or have meaningful relationships.

“These are kids that just have trouble regulating their moods and their anger, and they can be very self-destructive,” says Ginny Sprang, who is a professor of psychiatry and the executive director UK Center on Trauma and Children. “In the classroom or the community, they may be doing things to destroy property, they may be fighting, engaging in bullying.”

Instead of just treating the physical or behavioral health symptoms, researchers are trying to better understand the root causes of the adverse experiences that put children in a perpetual state of stress.

Back in 1985, doctors at an obesity clinic in San Diego couldn’t figure out why patients who achieved significant weight loss suddenly dropped out of their program and regained the weight they had lost. In follow-up contacts with those patients, doctors learned that many of the people who left the program had been sexually abused as children.

Those patients saw their weight gain not as a lack of control, but as a protective mechanism to insulate themselves from further abuse. Dr. Vincent Felitti, who studied these patients and did one of the first studies on ACEs, recalls clients telling him, “I don’t want bariatric surgery because what would I do if I needed to be fat again?”

In working with some 17,000 patients in the Kaiser Permanente health care system in California, Felitti and his investigators identified 10 different ACEs: physical, emotional, and sexual abuse; physical and emotional neglect; mental illness in a family member, an incarcerated parent, an abused mother, substance abuse, and divorce.

Two-thirds of participants in the study had at least one ACE. More than 20 percent had three or more ACEs. Researchers found that the more ACEs a patient had, the more likely they were to develop depression, cancer, heart disease, diabetes, and other conditions.

Felitti admits their initial study had an important flaw: Since the participants were drawn from the Kaiser Permanente system, they all had health care coverage. They were also largely middle class and college educated.

“If there are limitations to the original study, it’s that those study subjects do not represent a cross section of the U.S., particularly in gender, race, age, and income,” says Dr. Wendy Ellis, director of the Center for Community Resilience at George Washington University’s Milken Institute School of Public Health.

According to Ellis, it’s not just adverse childhood experiences that can lead to stress. Problems also result from underlying social issues that can create stress. She says these adverse childhood environments include poverty, discrimination, community violence, poor housing, and a lack of economic opportunity.

“It’s really helping to widen the conversation and broaden the understanding that we can’t just focus on the outcomes... without considering the context in which these adversities occur,” Ellis says.

Ellis is working with the health departments in Covington and in Metro Louisville to learn more about systemic social and economic factors that may contribute to adverse environments in those communities. In Louisville, that includes an examination of high eviction rates in minority neighborhoods. She says they are finding a series of state and local issues that limit tenant rights while giving property owners wide latitude to evict. She describes it as “a system that’s ripe for racial discrimination.”

When a population faces higher rates of chronic illness as well as systemic issues of poverty and inadequate housing and health care, Ellis says it’s no surprise they would also experience greater impacts from events like the COVID-19 pandemic. For example, although African Americans comprise only 13 percent of the population in the United States, they represent at least 30 percent of hospitalizations and 23 percent of deaths due to the coronavirus.

The pandemic is creating a new set of adverse experiences that affect a range from young children through college students. Beyond the fear generated by a highly contagious, potentially deadly virus, young people have had their normal educational activities and social interactions interrupted. Many families are facing great uncertainty about employment, income, and health care.

Melissa Collins is a senior at Centre College who has written about ACEs during her recent internship with Kentucky Youth Advocates. She says that she’s fortunate to have a strong family support system during these unusual times, but she knows that’s not necessarily the case for many young people, even those fortunate to attend a small, private college like Centre. When in-person classes resume, Collins says it will be important for schools to have support services ready for young people who have suffered during this period of uncertainty and social isolation.

“Having resources available for our students I think is going to make all the difference in how we come out even stronger after this,” says Collins.

Anastasia Pohlgeers’ successful transition from an abused child in foster care to accomplished high school student took conscious effort on the part of her adoptive mother. Connie Pohlgeers, who is an administrator in the Campbell County Schools, selected specific activities designed to help her daughter process the adversity she experienced before being adopted.

“We talked a lot about not playing the victim,” Connie Pohlgeers says, “and not feeling sorry for yourself but using your story to help others and using it to propel you on to great things.”

Anastasia is poised to do just that: She plans to study neuroscience at the University of Cincinnati in preparation for medical school. She says she wants to help others who experienced similar childhood traumas.

“I’m fascinated by how the brain works,” says Anastasia Pohlgeers. “The more that I can learn about the brain, the better doctor I will be about emotional health.”

Along with the potential for poor health and negative behaviors, children who experience childhood trauma are likely to develop intense feelings of shame, guilt, and responsibility, according to Sprang. They also have difficulty forming relationships.

“They have learned that intimacy is... associated with betrayal and a violation of trust,” says Sprang. “They begin to equate intimacy with harm and danger, and so that can also activate their stress response.”

This trauma can also lead to multigenerational abuse: Sprang says about a third of children who are maltreated go on to harm their own sons or daughters later in life.

Felitti says one of the best ways to reduce the impact of ACEs is for a child to have a trustworthy, supportive adult in his or her life. That can be a family member, a minister, a coach, or a teacher.

The Bounce Coalition is working to ensure that all children have someone like that in their lives. The non-profit organization works in 16 Kentucky counties to build awareness about ACEs and help kids bounce back from adversity.

“We want to make sure that no matter where children go, that they have an adult who can support them [and] that understands the impact of trauma,” says Betty Adkins of the Louisville Metro Department of Public Health and Wellness and a co-leader of the Bounce Coalition.

She says trauma-informed training has helped school bus drivers identify children who are experiencing abuse at home and get them help. Adkins also points to the work of an elementary school teacher who uses simple classroom activities to learn what adverse experiences may be impacting her students outside of school. For example, in one exercise she asks her students take out piece of paper and complete the sentence “If Mrs. Jones only knew.”

Adkins says the children respond with important details like that one or both parents are in jail, or that the teacher is the only person in that child’s life who loves them. That information helps the teacher know who needs special attention in the classroom or who requires specialized help from health care or social service agencies.

“The builder block of self-esteem and wellbeing is safety,” says Marta Miranda-Straub, commissioner of Department of Community Based Services, the state agency that supports Kentucky’s vulnerable children and adults.

Since taking over the department in June, she has worked to lower the caseloads of state social workers, help those employees deal with the vicarious trauma they experience, and improve the delivery of services like food stamps, Medicaid, and foster care.

“What happens to one of us affects all of us,” says Miranda-Straub. “So, I’m hoping that... the country continues to rally around safety, around protective measures, around prevention of pain and trauma and suffering so that the next generation has a healthier place to be born into.” 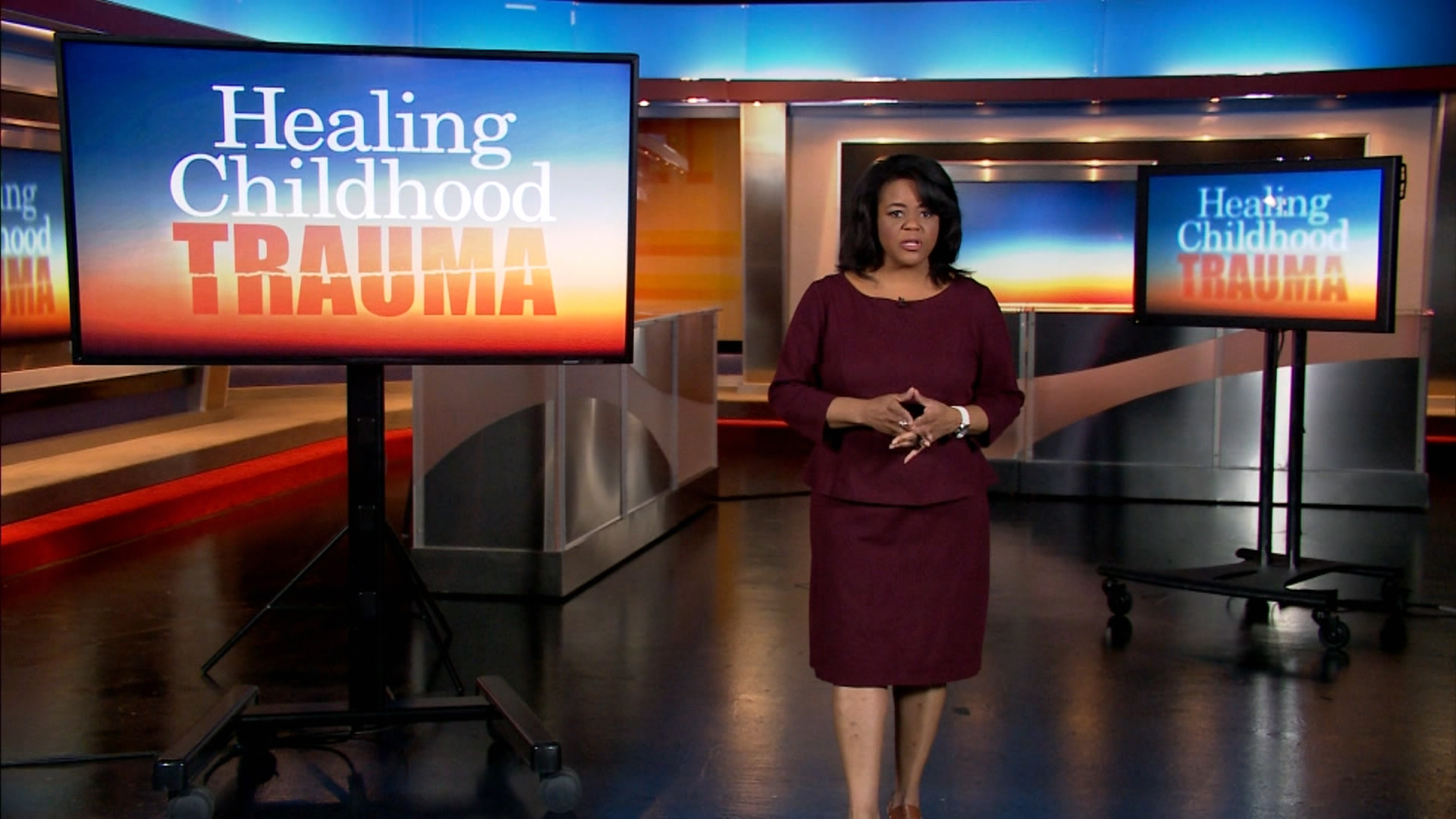