Filmed over two summers, this documentary explores the history and mission of the Governor's Scholars Program and its pivotal role in enhancing the next generation of leaders. The film features interviews with over seventy scholars, faculty, and alumni. A Michael Breeding MEDIA production.
Length 58:33 Premiere: 07/11/16

Igniting The Flame of Curiosity

Each summer in Kentucky for the past 33 years, select high school juniors have gathered on college campuses for five weeks of discovery during the Governor’s Scholars Program. A new film by Michael Breeding, “Igniting the Flame of Curiosity,” highlights the ways the program challenges its participants to grow – both academically and personally.

Aristófanes Cedeño, executive director and academic dean of the Governor’s Scholars Program, said the program seeks to develop service-minded leaders who are aware of the needs of others. “It isn’t enough to be an effective leader,” he said. “We want all of our scholars to know who they are, take care of themselves, physically and emotionally, and develop a spiritual reflection that will help them to be sensitive to the needs of all they serve.”

How It Works
The summer program offers selected students five weeks of living and studying on a Kentucky college campus, free of charge. To apply, students must be nominated by their school districts and be Kentucky residents in the 11th grade at a public or private school and be planning to return to a Kentucky school district the next school year. They also must have taken ACT, PSAT, or SAT in the 9th, 10th or 11th grades.

Before reaching state competition, applicants must compete at the school or district level. Over 2,000 applications are reviewed at the state level, and about 1,100 students are chosen to attend.

Selection is based on a student profile, a writing entry, and teacher and community recommendations.
Several Kentucky universities offer scholarships to students who have completed the Governor’s Scholars program.

How It Began
Lillian Press, the program’s first executive director, described what founders had in mind when they started the program in 1983. “We pretty much knew the philosophy that we wanted, that it would be nontraditional, that it would be innovative, that it would be transforming to a great number of students,” said Press. “But they had to have other interests besides just academia to be a Governor’s Scholar, because they were going to be the future leaders of Kentucky, the future citizens of Kentucky who would be fair and just. And they had to have a broad acceptance of diverse people. And that was the other criteria.”

In its first summer, Kentucky’s program had 245 scholars on one campus. Now the program serves about 1,100 students on three campuses, making it the largest Governor’s Scholars Program (GSP) in the nation. In any given summer, between 15 and 20 states offer similar programs, according to the National Conference of Governor’s Schools.

Learning How to Think
Scholar Shelbi Ryan of Louisville said the scholars comprise a community of passion. “Here, you don’t have to hide whether you’re interested in the Gulf War or what’s going on in Ukraine. Everyone here has a passion for something, whether it’s the arts or the political sciences, or just everything from math to singing operas.”

Bryan Rich, campus director in Louisville, said contrary to popular belief, GSP is not a college preparatory program. “Our purpose academically is to help them learn how to think,” he said. “And help them look at problem solving more creatively.”

Students studying astronomy made their own telescopes from scratch. Those studying architecture designed structures using only paper plates. The program allows students to explore areas of interest that push them outside their comfort zones. “I’ve been able to just totally branch out of my shell,” said scholar Josh Wilson of Waynesburg.

The instructors try to instill a culture of respect, said faculty member John Kinkade. “We take them seriously as thoughtful human beings,” he said.

Students are encouraged to use their own approaches to come up with ideas.

Bill Randall, a faculty member from Columbus, Ohio, said the benefits go beyond career training. “Ultimately I think the biggest benefit they get from it is they’re able to start to make choices, very informed choices about the types of futures they want to have, the type of world they want to have,” he said.

A Communal Mindset
The mission of GSP also includes civic engagement. Scholars have built a house for Habitat for Humanity and volunteered at food banks and soup kitchens. Scholar Gabby Pyles of Campbellsville enjoyed playing with children at a homeless shelter once a week.

For the five weeks of the program, scholars must leave their cell phones in their dorm rooms, so they are focused on the people on campus and in the community. “You’re being engaged with the people here,” said scholar Emily Johncox of Fort Thomas.

Faculty member Kishona Gray said the program encourages a communal mindset. “That’s what we need in order to keep Kentucky free,” she said. “We really have to have that communal mindset that we have to take care of everybody. We’re not just in this by ourselves.”

“Igniting the Flame of Curiosity” is an independent production, produced by Michael Breeding MEDIA.
For more information: http://gsp.ky.gov/ 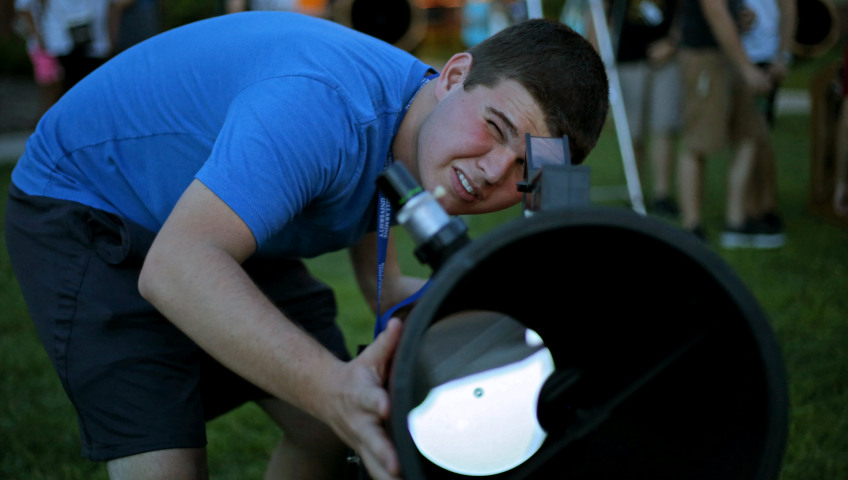