By the eve of Election Day, nearly a million registered voters in the commonwealth had already cast their ballots. If in-person voting is strong on Tuesday, Kentucky could have a 70 percent turnout for this general election cycle. Not bad for a year that has included an unconventional race for the White House and a once-in-a-century pandemic.

This election has been a challenge for voters as well as candidates. Williams says the three weeks of early voting in Kentucky forced candidates to spend more money earlier, which means they had to raise that money sooner in the election cycle. She says down-ballot candidates have also had to figure out how to communicate their message to voters who may be more focused on the presidential race and the U.S. Senate contest.

“You’ve had to see people pivot and think about these elections in ways that we never have before,” says Sara Osborne, chief of staff for MML&K Government Solutions. “It’s who can best repurpose the resources they have and the skills they have.”

Early voting and mail-in voting have come under scrutiny in several states, but so far Kentucky has avoided much of that scrutiny. Osborne attributes that to Republican Secretary of State Michael Adams and Democratic Gov. Andy Beshear working together to design a system that allows voters to safely cast their ballots during the pandemic while maintaining the integrity of the election results.

Still some politicos do worry about the final tallies, especially in state where recent legislative races have turned on a mere handful of votes.

“There’s some heartburn over election integrity when we’re trying it out for the first time, it’s brand new, [and] we’re in a pandemic,” says Republican political consultant Julia Bright Crigler. “We’re in unprecedented, uncharted territories.”

All in all, though, Kentucky Democratic Party Vice Chair Cassie Chambers Armstrong says she thinks the state’s candidates and voters are pleased with how the elections have unfolded, even with the emergency measures.

“Both Democrats and Republicans have loved having so many options to vote over such an extended period of time that I think it’s going to be really hard to go backwards and decrease those options,” she says.

Polling has consistently kept incumbent Republican Sen. Mitch McConnell in the lead against his Democratic challenger Amy McGrath. Democrats have yet to find a formula for beating the Senate Majority Leader, who is seeking his seventh term in Washington.

“This campaign and this year was always going to be a massive uphill battle for Democrats,” says Osborne, “but I think Amy McGrath has run a great campaign, especially in these waning weeks.”

The Democrat surprised many pundits with a strong performance in the one debate the two candidates had. McGrath has also bested the senator in money: She’s outraised McConnell by about $30 million dollars. Yet Williams predicts McGrath will still lose by 10 to 12 points.

Even if Kentuckians return McConnell to Washington, he may no longer be majority leader, if Democratic Senate candidates elsewhere can win enough seats to flip control of the chamber.

“There has perhaps been a national strategy that we can’t beat Mitch McConnell in Kentucky, [so] we’ll try to make him minority leader,” says Crigler.

“I think this is a race to watch, says Chambers. “[Hicks] has run an excellent campaign and if you look at Andy Barr, he looks like a losing candidate. He is going negative.”

To flip the seat, Osborne says Hicks will need to combine strong Fayette County turnout with a solid performance in the suburban counties of Madison, Scott, and Woodford.

Crigler and Williams doubt the seat is in danger for the Republican. Crigler says Barr was most vulnerable in the 2018 mid-term contest when he faced Amy McGrath. Williams contends Barr’s job performance will help him overcome any surge in Democratic voting in Fayette County.

“Hat’s off to Josh Hicks, he’s run a tough campaign,” says Williams, “but I think Andy’s hard work, his constituent services, his leadership in Congress, and what he’s done in the district, I think he prevails.”

All 100 seats in the Kentucky House of Representatives are up this year. Of those contests, 20 Republicans and 15 Democrats are running unopposed. Chambers predicts Democrats will have a net gain in the chamber where Republicans hold a supermajority. Williams says she expects Republicans to pick up eight seats.

13th House District. This Daviess County district features a rematch between incumbent Democrat Jim Glenn and Republican D. J. Johnson, where one vote separated the two candidates in their 2018 contest. Williams says the popularity of President Donald Trump, Sen. McConnell, and incumbent Republican Congressman Brett Guthrie should provide enough coattails to carry Johnson to victory this time. Chambers contends city of Owensboro could provide good turnout for Democrats, and that Glenn is a strong fundraiser who is well liked in the community.

45th House District. This Fayette County seat is open following the retirement of Republic Rep. Stan Lee. Crigler says the district is actually more moderate than Lee was, that’s why she thinks Killian Timoney, who she describes as a moderate Republican, who will be a good fit the district. Osborne says Gov. Beshear performed well in that district last year, so she thinks Democratic candidate Shirley Flynn Mitchell might be able to flip this seat.

96th House District. Democrat Kathy Hinkle is seeking a second term representing Carter and Lawrence counties. Chambers says Hinkle has a great network of Democratic women supporting her re-election bid. Crigler says Republicans have had a difficult time capturing the district despite the fact that it went for President Trump in 2016. But she considers this a race to watch, saying Republican Patrick Flannery is a great match for the district.

99th House District. This race is a repeat of a special election contest held earlier this year to fill the seat vacated by Democrat Rocky Adkins, who went to work in the Andy Beshear Administration. Democrats lost control of the seat after more than 30 years when Republican Richard White, who owns a local lumber yard and a resort in the Red River Gorge, won the special election. He will once again face Democrat Bill Redwine, who is an assistant vice president at Morehead State University. Williams predicts this rematch will be close.

Half of the state Senate’s 38 seats are up for election this year. Chambers again predicts Democrats will have a net gain in those contests. Williams agrees, saying she expects Democrats to pick up one seat. Republicans currently hold a 28 to 10 majority in the chamber.

Key races to watch include:

7th Senate District: Long-time lawmaker and former Gov. Julian Carroll is stepping down from the seat that represents the counties surrounding Frankfort, Lawrenceburg, and Versailles. The race features Democratic state Rep. Joe Graviss, Republican and Tea Party activist Adrienne Southworth, and independent candidate Ken Carroll, who is the son of Julian Carroll. Osborne says she expects state employees who live in the district to support Graviss, who has been an advocate for public pensions. While some counties of the district do favor Democrats, Williams says President Trump and Congressman Barr have performed well there. And Crigler says Southworth’s campaign is peaking at the right time. Another interesting dynamic, according to Osborne, is that Julian Carroll endorsed Graviss before Ken Carroll entered the race.

23rd Senate District. In northern Kentucky, incumbent Republican Sen. Chris McDaniel is fending off a Democratic challenger in military veteran and local veterinarian Ryan Olexia. Crigler says McDaniel, who is chair of the Senate Appropriations and Revenue Committee, has the name recognition, reputation, and fundraising advantage to keep the seat. Osborne says the suburban district across the Ohio River from Cincinnati is trending blue and went for Andy Beshear in the governor’s race last year. She thinks this could be a pickup for Democrats in the Senate.

29th Senate District. This can be difficult race to keep straight as incumbent Democrat Johnny Ray Turner is facing Republican Johnnie L. Turner to represent Floyd, Harlan, Knott, and Letcher counties. Osborne says the incumbent has held the seat for 20 years even as the district has grown increasingly red. Crigler says straight-ticket voting and confusion over the names may give the Republican Turner the edge in this race.

31st Senate District. Republican Phillip Wheeler won the seat in Elliott, Lawrence, Martin, Morgan, and Pike counties in a special election in 2019. Crigler says Wheeler has already proven to be a great voice for his mountain constituents and has delivered on his promises since being elected. But Chambers says Wheeler may be hurt by allegations of homophobic remarks and re-sharing of racist content on social media. The Democrat in the race is Glenn Martin Hammond, an attorney in Pikeville. 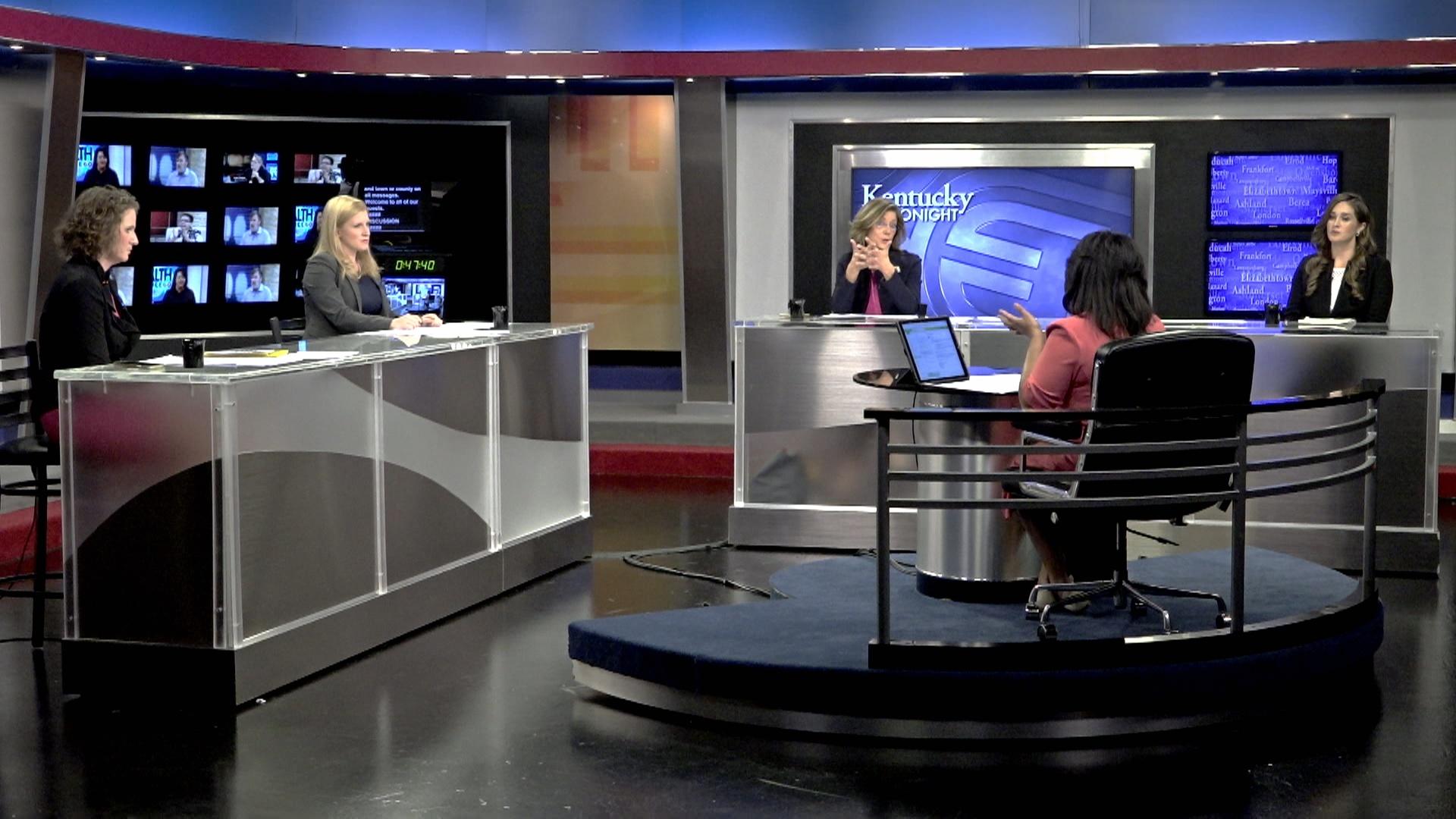