Despite a mandate to produce a new state budget, and concerns about revenue, public education, and criminal justice looming large, Republican leaders in Frankfort have focused on different issues for their priority bills.

House Bill 1, which is expected to be unveiled next week, will tackle welfare reform. Senate Bill 1, which was introduced last week, requires law enforcement agencies in the state to cooperate with federal immigration authorities, and prohibits communities and other public entities from giving sanctuary to undocumented immigrants.

Stivers says Latin American drug cartels are flooding the commonwealth with heroin, fentanyl, methamphetamines, and other dangerous drugs. He contends SB 1 will help local law enforcement agencies better fight this tide of illegal drugs, and the problems of addiction, human trafficking, and other criminal activities that come with it.

Democrats agree the state does have numerous drug-related challenges, but they contend SB 1 is not the way to address those problems. Sen. Reggie Thomas (D-Lexington) says he's heard no concerns that local communities have hampered state police drug enforcement efforts. He also contends the bill could promote racial profiling because it allows police to ask individuals for proof of citizenship.

“It’s truly an anti-immigration bill," says Thomas. “There are no sanctuary cities in Kentucky... so we've got our top-priority measure prohibiting something that doesn't even exist.”

The View from The House

House Speaker David Osborne (R-Prospect) says he's trying to gauge interest on the issue among his caucus members. He says sanctuary cities legislation has been filed in the House of Representatives in previous sessions. But Minority Whip Angie Hatton (D-Whitesburg) says those measures never gained much traction.

“The degree to which you think this is an important issue largely depends on where you get your news," she says.

Hatton says she supports the fight against illegal drugs, but fears SB 1 could have unintended consequences.

“For one thing it shifts a lot of federal costs to local law enforcement agencies, and I think that may be something that causes it to be an unfunded mandate,” says Hatton.

The Legislative Research Commission has yet to release a fiscal impact statement on how the bill could affect local communities. Stivers contends the costs should be minimal because he says local law enforcement is already doing many of the activities the legislation seeks to protect.

The Senate president also says the bill is not anti-immigrant nor does it allow racial profiling. He says he supports legal immigration because the state needs migrants to boost the workforce. Stivers says he believes the bill is constitutional, but he doesn’t think that will stop it from being contested in court.

“We're used to challenges,” says Stivers, “but that doesn't stop us from doing what we think is necessary and right.”

Osborne says House Bill 1 dealing with public assistance is being finalized and should be introduced in a few days. He says the legislation is based on ideas that came out of a bipartisan welfare working group co-chaired by House Speaker Pro Tem David Meade (R-Stanford) and Minority Floor Leader Joni Jenkins (D-Shively).

“There's nothing in here that is aimed at throwing people off public assistance,” says Osborne. “This is to try to use the flexibility of our public assistance programs to help people get back into the workforce.”

Osborne says the bill seeks to eliminate the sharp reduction in public benefits that can occur as an individual's or family's income starts to rise. That can lead to unstable access to health care, food, or housing, which can discourage people from entering the workforce in the first place.

The bill will not require welfare recipients to undergo drug tests, a provision that lawmakers included in a reform measure proposed last year. Osborne says the working group found drug testing to be an ineffective means to clamp down on welfare fraud. But he says the new bill will include other anti-fraud measures.

Hatton says she thinks House Democrats will be able to support some aspects of the bill, especially efforts to address the benefits cliff and to reduce fraud.

“No one wants fraudulent benefits to be taken advantage of because that ruins it for the people who really need it,” she says.

The Budget, Revenues, and Taxes

Even though public assistance reforms will be embodied in HB 1, Osborne says that's not the chamber's primary focus.

“Our number one priority this year is the one bill that we’re constitutionally mandated to pass, and that’s the budget,” says the House Speaker. “It will be dedicating $22 billion of state resources to some very, very vital programs.”

Osborne says Republicans remain committed to continuing the transition from income taxes to consumption taxes in the commonwealth, but he says that move will occur "as quickly as it make sense" given the state's budget obligations.

“We have to be careful before making major changes,” to the tax codes, says Osborne, “but I think there is generally a consensus that we will continue to move forward in the direction of broadening the base and lowering the rates.”

Hatton says Democrats are against a broader application of sales taxes.

“Our [tax] system is antiquated and we have to look at ways to bring that up to date, but I don't think that a consumption-based tax, which is disproportionately going to effect poorer people, is the way to go," says Hatton. “I think that we should end some of the corporate welfare instead.”

Stivers says Kentucky could lose population and businesses unless it follows the low-tax model of states like Tennessee and South Carolina that he says are "growing and having a booming economy." He argues that the careful application of corporate tax incentives can result in higher state revenues. As an example, he points to a tax cut lawmakers enacted on bourbon aging in warehouses.

“We cut the ad valorem tax [and] lost $12 million in revenue,” says Stivers, “but today we’re generating 65 percent more in revenues off of those taxes because we broaden the base.”

That cut also generated $3 billion in new investments and 2,000 new jobs in the bourbon industry, according to Stivers.

Osborne adds that the biggest tax breaks the state offers are on purchases of food, medicine, residential utilities, and retirement incomes.

Thomas says he opposes increasing the pension income exclusion by $10,000 as has been proposed in the past. He's also against regressive taxes that he says would further burden poor Kentuckians. But he agrees that a tax overhaul is critical.

“Any kind of tax reform has to bring in more money – considerably more money,” says Thomas. “Our budget right now is... underfunded by an excess of $1 billion.”

Hatton says the state isn't ready for recreational marijuana, but she thinks there is sufficient support in the House to allow medicinal cannabis. In addition to providing comfort to cancer and multiple sclerosis patients, Hatton says it can also help veterans suffering from post-traumatic stress disorder, and those trying to break the grip of opioids.

“Rather than being considered a gateway drug, it can be an off-ramp drug,” says Hatton, “so that those who are suffering from opioid addiction can use marijuana medicinally to help them reduce the symptoms of opioid addiction.”

A medical marijuana proposal passed out of committee last year on a 17-1 vote, says Hatton, but that measure never made it to the House floor. Osborne won't commit to a floor vote this year, saying medicinal cannabis remains "a divisive issue."

After being skeptical about marijuana proposals in the past, Stivers says he now thinks there could be a tightly focused path to legalizing medical marijuana, but he opposes taxing it.

Stivers is also opposed to expanded gaming measures, saying that casinos are "extremely regressive." Hatton says she thinks there is broad support for expanded gaming around the commonwealth. Thomas says Kentucky is losing gambling revenues to other states that could be kept here to fund education and infrastructure needs.

Osborne says there's great interest in enacting more reforms to the criminal justice system. The challenge, he says, is finding agreement on the exact nature of those reforms. The House Speaker says he thinks it would be wise to take a piecemeal approach to criminal justice legislation.

“One of the thing that has bogged us down in previous attempts on criminal justice reform is the attempt to look at it in a very broad sense and try to get our arms around doing massive reforms,” Osborne says. “When you attempt to take that big a bite of it, it's very difficult to get consensus.”

Thomas says lawmakers tackled criminal justice reform in 2011 in hopes of decreasing the state's prison population. But since that time, he says there's been a 100 percent increase in the number of incarcerated individuals. Some 24,000 Kentuckians are now incarcerated and Thomas says thousands of them are detained simply because they can't afford to pay their bail.

Hatton says criminal justice reform will take courage and bipartisan commitment among lawmakers so that no one party can be labeled as being soft on crime. 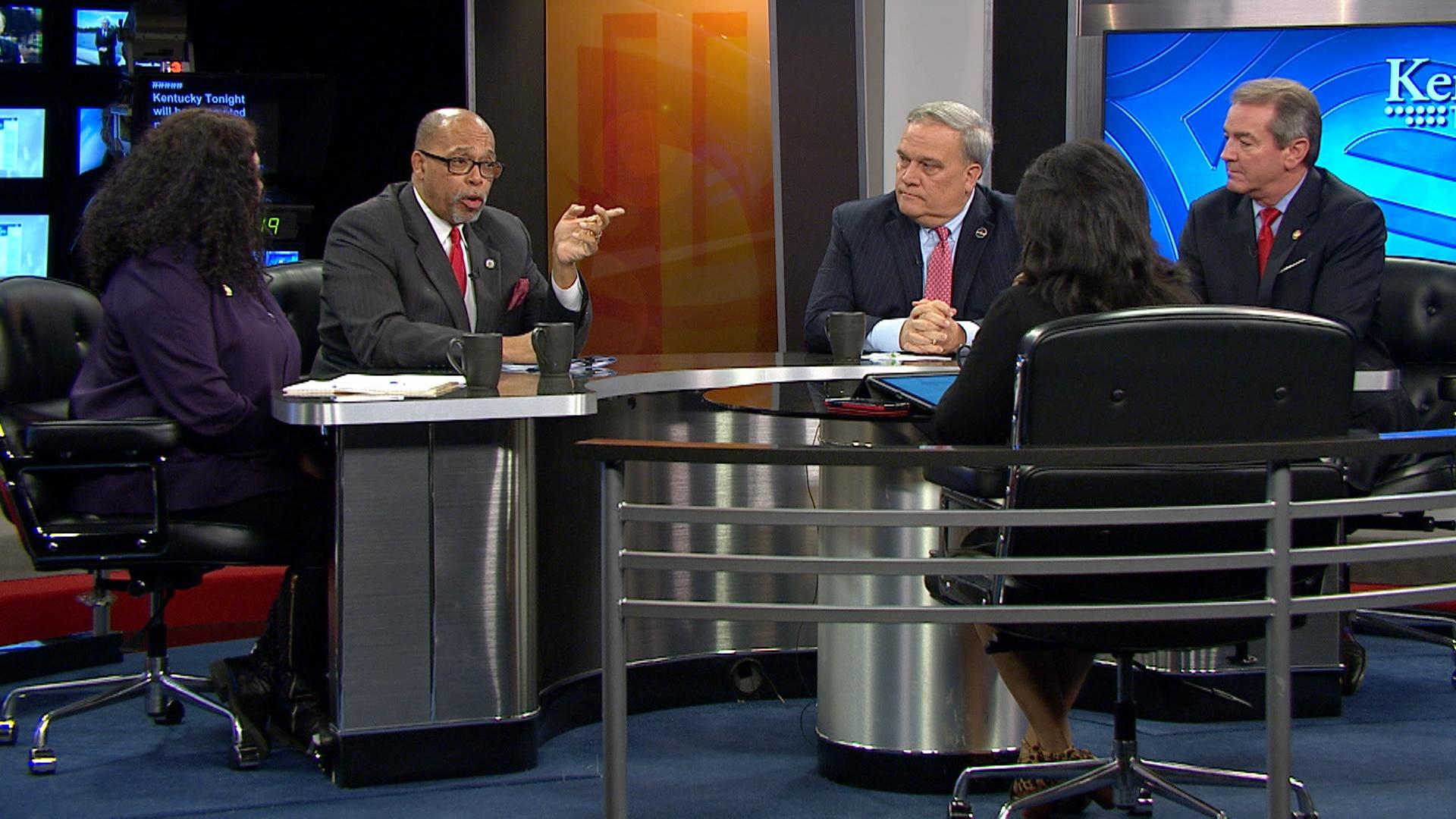