Republicans Solidify Their Power in Frankfort with Election Gains

While the fight over the presidential vote count continues, the results in Kentucky left little doubt about the dominance of the GOP in the commonwealth.

“We had a great night,” says political consultant Ellen Williams, who is a former chair of the Republican Party of Kentucky.

In addition to giving solid victories to President Donald Trump, Senate Majority Leader Mitch McConnell, and the state’s five Republican incumbents in Congress, Kentuckians also delivered even greater majorities to Republicans in the state Senate and House of Representatives. The GOP is on track to hold 75 out of 100 seats in the House, and 30 of 38 seats in the Senate.

Democrats had hoped to make gains in the House with crucial wins in Jefferson and Fayette Counties. But that didn’t happen. Louisville Republican Jason Nemes kept his seat in the 33rd House district. Democrats also lost House district 44 in Jefferson County, which had been held for one term by Maria Sorolis. Democrats lost another potential pick up in Lexington’s House District 45: Republican Killian Timoney won the seat held for nearly 20 years by conservative Stan Lee, who is retiring.

Williams says Republicans flipped seven seats held by Democrats who retired, and GOP candidates defeated six Democratic incumbents. Lobbyist Amy Wickliffe says Democrats drew those districts, so the fact that Republicans can win there bodes well for the party that will oversee the next round of redistricting in the state.

State Republicans enjoyed having President Trump and Sen. McConnell at the top of the ballot to help boost down-ballot candidates. But Wickliffe, who is a partner in the governmental relations firm McCarthy Strategic Solutions, says those coattails didn’t do all the work.

“Does Trump help in some rural parts of the state? Sure,” she says. “But I also give credit to those candidates. They run like they’re 10 points down every single day and keep their heads down and focused on winning.”

The Republican caucuses in Frankfort will also be more diverse, according to Williams. She points to the addition of four women and a number of younger lawmakers to GOP ranks. Wickliffe says those fresh perspectives will add a new energy to policy debates.

“She’s the gift that keeps on giving,” says Williams. “We use [Pelosi] in our state House races here, so as long as that national Democrat agenda continues to stay far left, I think Kentucky Republicans continue to win.”

When it comes to defining issues and candidates, Democratic campaign consultant Sherman Brown agrees that Republicans have the upper hand.

“I think our messaging has been lackluster to say the least,” he says.

The GOP has used phrases like “Green New Deal” and “defund the police” to pummel Democrats, according to David Tandy, an attorney and former president of the Louisville Metro Council. He says Democrats need to be more aggressive about framing issues in ways that directly relate to voters’ lives and use language they will understand.

“We get too scared of taking on a fight,” says Tandy. “If you’re a Kentucky Democrat, you need to speak to people, their aspirations, and where they are... Everybody wants to have a good-paying job, they want to feel safe in their neighborhoods... and they want to feel like their kids could have a better opportunity for the future.”

Although Republicans will continue to control the state House and Senate, Tandy warns that majorities don’t last forever. He says the electorate can quickly turn on a party in power if they fail to deliver on their promises.

“There will come a time where Democrats in Kentucky will regain the House,” says Tandy. “I can’t look into my crystal ball and tell you exactly when that’s going to happen, but know that it will happen at some point in time because situations change.”

“It does swing and you must never take a win for granted,” adds Williams. “You must never think that that seat is a Republican seat, because it’s the people’s seat.”

So what will Republicans do with their super-sized majorities in Frankfort during the upcoming 30-day legislative session?

Williams and Wickliffe expect education spending and broadband internet service to be priorities in the state budget. They also foresee legislation to help the economy recover from the coronavirus pandemic, address unemployment insurance expenses, create liability protections for businesses, and limit executive actions taken by governors during an emergency.

“You’re going to see our supermajorities look to refine the executive authority of the [governor] from the standpoint of extent and duration of the orders,” says Williams.

“How long can a state of emergency go on without any check and balance from the legislature?” adds Wickliffe.

For Democrats the challenge is to find relevance in a capitol dominated by Republicans.

“Your job then is to be the conscience of that legislative body,” says Tandy.

That includes raising opposing points of view and forcing Republicans to respond to them, he says. Although Democrats may be small in number, Tandy hopes GOP leaders will listen to ideas that come from the minority party “because you don’t know where good ideas are going to come from.”

Brown says Democrats can also build coalitions with groups of GOP lawmakers around specific issues on which they can agree, such as criminal justice reform.

As for leadership in the chambers, Democrats need to select a new Minority Caucus Chair in the Senate, following the defeat of Johnny Ray Turner (D-Prestonsburg) last week. In the House, Republicans still await the return of Majority Floor Leader John Bam Carney (R-Campbellsville), who has battled health problems since last Christmas.

Voting in the Presidential Race

Kentucky’s Mitch McConnell took a strong stand for President Trump on Monday, saying the incumbent is “100 percent within his rights to look into allegations of irregularities” in the vote count in the presidential election. The Trump campaign’s legal team has brought challenges in several states over results in the contest with Democrat Joe Biden.

Williams and Wickliffe say they support the president’s right to challenge the results, but that he must also provide valid evidence of fraud or illegal behavior.

“Those all deserve to be thoroughly examined, and that’s important for everyone so that we trust the process,” says Wickliffe. But she adds that “at the end of the day I don’t think what happens in Pennsylvania or any of these other states are going to ultimately change the outcome of the race… I believe that President-elect Biden will assume the presidency.”

Requesting recounts and filing legal challenges is one thing, says Brown. But he adds that alleging widespread fraud without proof is very different.

“When you have a president saying the election is being stolen... that undermines our democracy and I think that has to be addressed,” says Brown. “You have to have Republicans come out and say, ‘That part’s not right.’”

Much of the attention has focused on Pennsylvania, where President Trump had a substantial lead on election night. But as officials there processed mailed-in ballots after Election Day, the president’s advantage evaporated and former Vice President Joe Biden took the lead. President Trump has said winners should be determined the night of the elections, not days later. Tandy says the counting issue points to a key difference in how states process ballots received by mail.

“What Kentucky got right that Pennsylvania did not is that in Kentucky, our election officials were allowed to start processing ballots before Election Day,” says Tandy.

As part of an agreement made by Secretary of State Michael Adams, a Republican, and Gov. Andy Beshear, a Democrat, voters in the general election had the options of no-excuse absentee balloting and a three-week window to vote early in person. The panelists say they hope the legislature will codify some version of those measures into state law so that Kentuckians can continue to enjoy that level of flexibility in future elections.

If the presidential race is ultimately certified with Biden as the winner, Williams says she thinks the Democrat will work well with his former Senate colleague Mitch McConnell.

“It was Biden who McConnell worked with during the Obama Administration,” says Williams. “So I think we’ll see a lot of good work come from Biden and McConnell because of the years of friendship and relationship they’ve had in the Senate.”

A President Biden will have to manage not just COVID-19 and the economic recovery from the pandemic, but potential challenges from the far-left wing of his own party.

“Democrats love to just argue amongst ourselves,” says Brown. “It is a big tent, we have a lot of different voices right now... so he’s got his work cut out for him.”

Biden would also inherit a deeply divided country. Tandy says he hopes Americans of opposing political parties can get back to seeing each other as brothers and sisters, not as enemies. Wickliffe agrees, but she also fears that restoring empathy and respect among voters will take a while.

“What we have to remember is that we did not get here overnight, and so it’s going to take a little bit of time to walk back and to try to find commonalities,” says Wickliffe. “I think we so often forget to see the good in people and try to find what we have in common with people… It’s on all of us in Kentucky and across the nation to start to make those changes.” 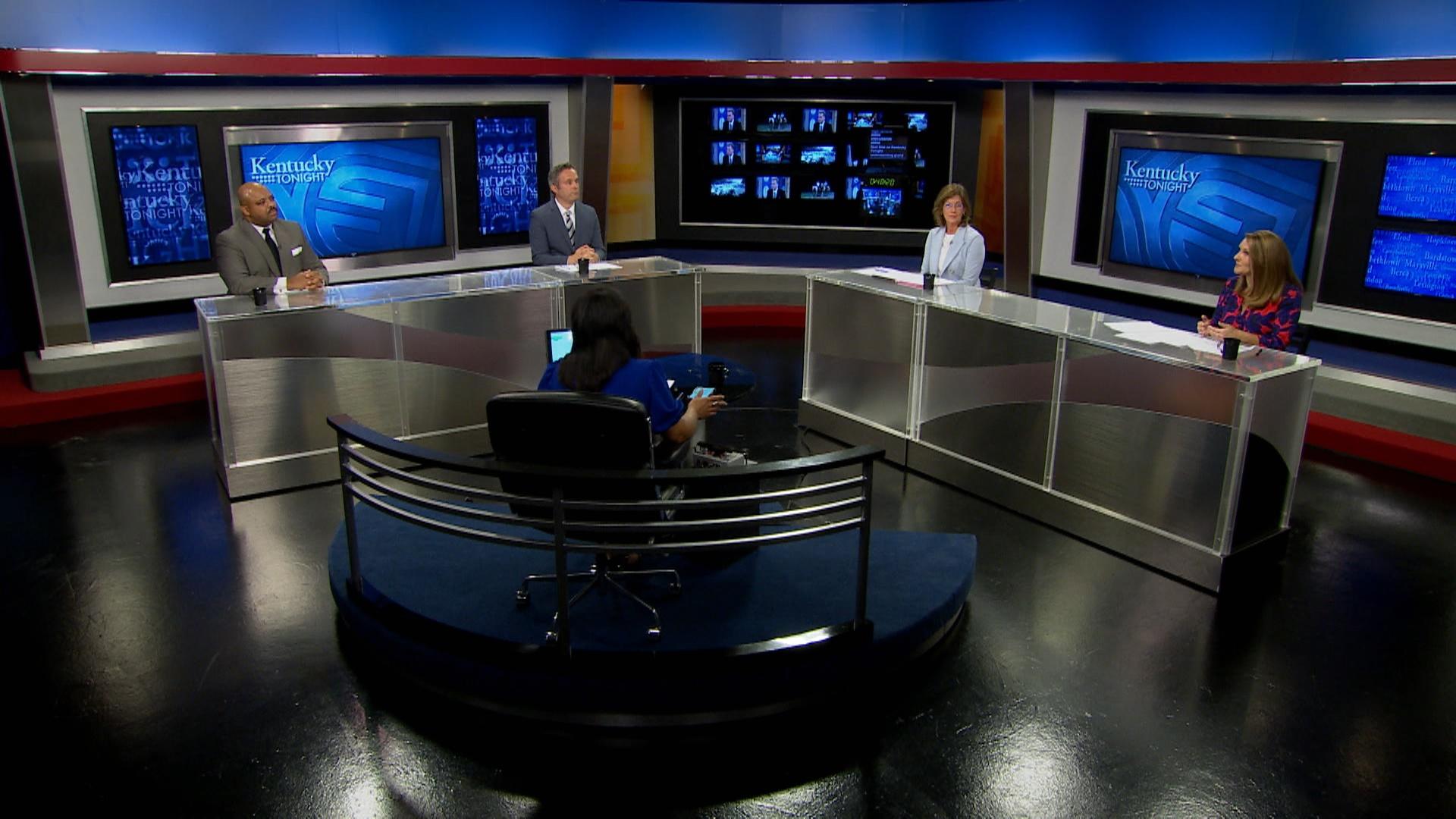