Prospects for Bail Reform in Kentucky

When the bail system works, certain criminal defendants who don’t pose a flight risk or danger to society are able to post money with the court to gain their freedom while they await their trial.

But critics say the system as it plays out in Kentucky and other states now results in thousands of low-level offenders being detained for weeks or months simply because they cannot afford to pay their bail, while wealthier defendants who may have committed worse crimes can go free. At the same time, counties and the state face higher incarceration costs and jail overcrowding, and defendants who are detained run an increased risk of reoffending in the future, according to a report from the Louisville-based think-tank, the Pegasus Institute.

This week, the General Assembly is expected to consider a measure that would overhaul the state’s bail system for the first time in more than 40 years. KET’s Kentucky Tonight explored the proposal with Sen. John Schickel (R-Union); Rep. John Blanton (R-Salyersville); Rob Sanders, Commonwealth’s Attorney for the 16th Judicial Circuit in Kenton County; and B. Scott West, Deputy Public Advocate for the Kentucky Department of Public Advocacy.

House Bill 94 aims to substantially reduce the use of money bail in the commonwealth by requiring judges to impose bail only to ensure a defendant’s appearance in court. Bail could no longer be imposed for the sole purpose of protecting public safety or preventing the release of an offender. When judges do impose bail, it must be an amount that the defendant can afford to pay.

“We’re just trying to put together a fair and balanced bail system here in Kentucky, says Rep. Blanton, who is a retired state trooper and the sponsor of HB 94. “Public safety is our first and foremost concern, and so we have to make sure that serious offenders are detained and given a bail bond that is adequate for their charges.”

The legislation also requires judges to consult a pretrial assessment tool to determine the risk level a defendant poses. If they are deemed a low or moderate risk, the judge could impose a non-financial bond, or hold a detention hearing on the offender within three days. Judges can consider the nature of the crime and the history and character of the defendant when making their decisions.

Pegasus Institute research says some 64,000 nonviolent, nonsexual offenders were detained in Kentucky in 2016 because they could not afford the bail set for them. Those defendants spent an average of 109 days in jail awaiting their trial, costing the state and counties about $152 million, according to the Pegasus report.

The economic impact goes beyond what the state pays. Blanton says defendants held over until trial are at risk of losing their jobs and may be unable to find new work when released. Without that income, they may lose their homes and resort to committing some other crime to get by.

Deputy Public Advocate B. Scott West contends many of those low-risk offenders being held would have returned for their court dates had they been released. He says the money bail system has eroded the presumption of innocence that should come to all defendants.

There’s an additional irony to the situation, says West. If a low-level defendant pleads guilty, he says they are often released with time served. The person who maintains their innocence and can’t afford bail usually remains incarcerated.

Protecting Judicial Discretion
The idea of money bail dates back centuries to English common law in which the accused (or a friend or family member) was required ensure they could pay the settlement in a dispute. That evolved into paying money or posting a bond to ensure that the defendant would return to court if they were released while awaiting trial. In America, the Eighth Amendment to the U.S. Constitution and section 17 of the Kentucky Constitution acknowledge the bail process by simply saying that bail imposed on defendants should not be “excessive.”

Sen. John Schickel, who is also a retired law enforcement officer, says the system gives citizens who want to raise bail money on behalf of a defendant a role in the criminal justice process.

“When someone is just charged, a cash bail gives the community the opportunity to participate,” says Shickel, “and if they believe in that person, have that person released from custody.”

The senator is concerned that bail reform measures like HB 94 remove discretion from locally elected judges in favor of a mathematical algorithm enacted by the legislature to assess the risk level posed by an offender. What’s worse, according to Shickel, is that most judges have little or no confidence in pretrial risk assessments now. (A state penal code reform bill enacted in 2011 placed greater emphasis on risk assessment scores.)

“The legislature is famous for criticizing the judicial branch – we say they legislate from the bench, but maybe we need as legislators… to stay in our lane too,” says Schickel. “For us to try to legislate to them through an algorithm that we’ve put into law who they should be releasing and who they should not be releasing, I question whether that’s the right thing to do.”

Blanton says his bill provides judges more latitude to determine which low- and moderate-level offenders are released as well as how they are released by employing tools like ankle monitoring bracelets and home incarceration.

“We’ve tried to give more discretion to the judges,” says Blanton. “But what they can’t do [is] set a bond knowing, just purposefully, somebody can’t afford it. It has to be a bond that is fair, based on all the tools that the judge has.”

Shickel also argues that the Pegasus research vastly overstates the problem. He says the actual number of people eligible for cash bond who remain in jail is actually around 6,000 people.

Kenton County prosecutor Rob Sanders says many defendants have family members or friends who could easily afford to make bail for a defendant but choose not to because they don’t want to be responsible for ensuring the offender returns to court. In other cases where the defendant may have an addiction, relatives may believe the offender is better off behind bars without access to drugs.

Sanders says he’s not opposed to bail reform. But he contends the problem of judges imposing unfair bail amounts is limited.

“We’re, to some extent, trying to legislate for a problem that’s only occurring in specific places, with specific judges that for one reason or another are keeping too many people locked-up, pretrial,” says Sanders. “We need to go to those judges and say, ‘why?’”

The activities of some judges is also a concern for public advocates, says West.

“There are places in Kentucky where there are some judges that will just automatically set a $10,000 cash bond on a trafficking charge, or a burglary third [degree] or burglary second [degree] charge. It’s automatic,” West says. “That’s not the exercise of discretion if you set the same bail on the same charge every time.”

The Concerns of Prosecutors
Sanders also wishes reforms would include more substance abuse treatment on the front end of a defendant’s time in the criminal justice system. He says only Boone, Kenton, and Fayette counties currently have pretrial treatment options, which he says yields better outcomes for defendants with an addiction, and frees up space in jails that are already at or over capacity.

“I wish we had enough detox beds in Kentucky that we could put them all into detox, but we don’t, so our jails have become detox [centers],” says Sanders. “There’s no easy fix to this problem of jail over-crowding and jail costs, because all the solutions all cost money.

Sanders says prosecutors are also concerned about over-reliance on the risk assessment algorithm and about which offenses are classified as low-level and nonviolent. As for the concern that defendants held over for trial might lose their jobs, he says most judges will try to release offenders who have verifiable employment. Finally he worries that mandating a bail hearing within three days will further tax already over-extended prosecutors and public defenders.

West says public advocates are prepared to do whatever the legislation calls upon them to do. He contends that the number of bail hearings will likely decrease over time thanks to the proposed reforms.

Blanton says he expects HB 94 to be heard in committee this week. He says it has bipartisan support in both chambers, as well as endorsements from the Kentucky League of Cities, Kentucky Association of Counties, and the state’s jailers. Although he’s awaiting the fiscal impact statement on the measure, Blanton says he believes it will generate cost-savings for counties and the state. 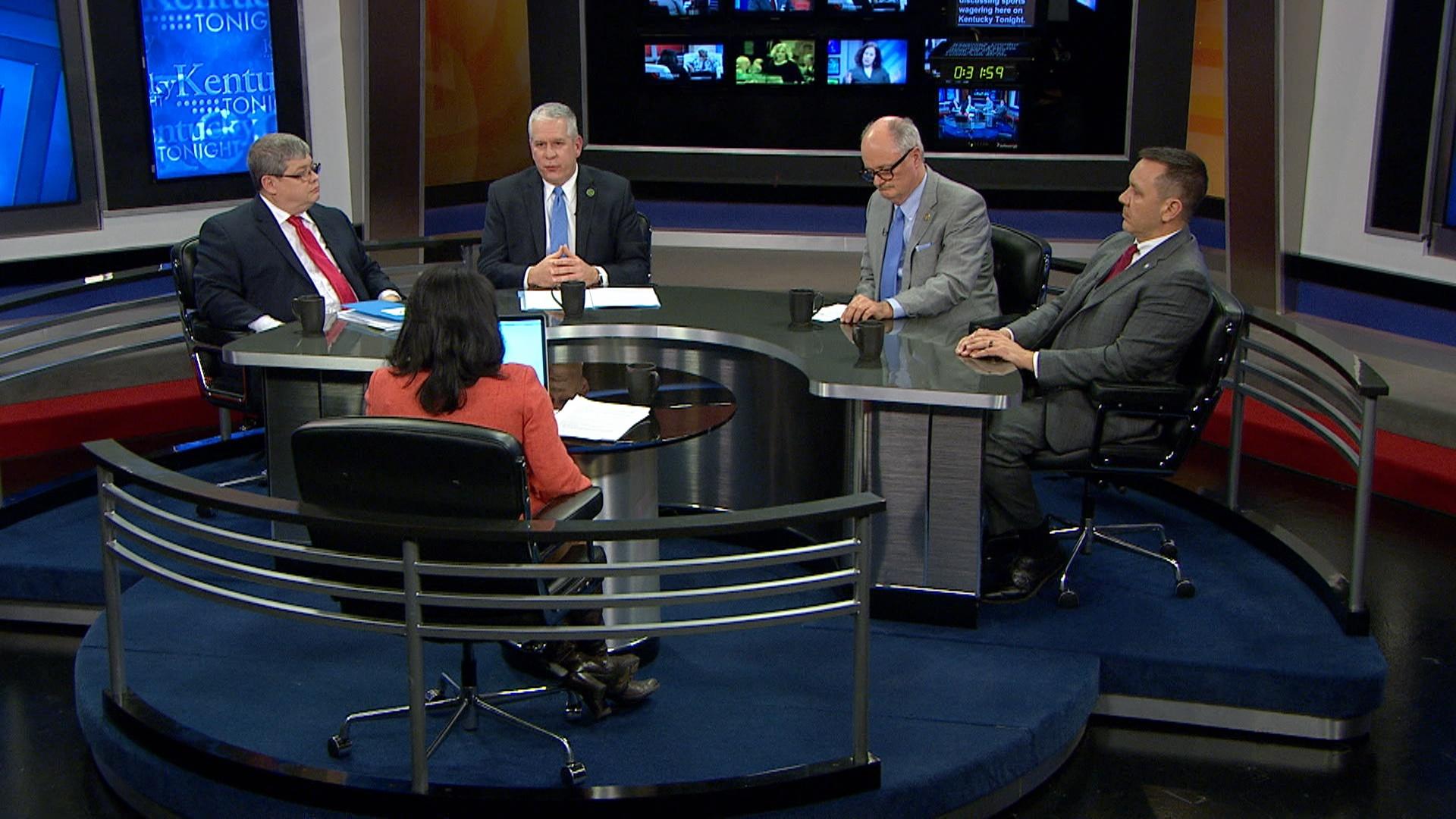