Candidates for Congress in the 4th, 5th, and 6th Districts Discuss Domestic Issues and Foreign Policy

Kentucky Tonight hosted the third in a series of discussions about the 2022 midterm elections as Renee Shaw spoke with candidates running for the U.S. House of Representatives in the state’s 4th, 5th, and 6th Congressional districts.

Matt Lehman is an entrepreneur and consultant working in the biotechnology, health care, and Thoroughbred horse industries. He was a McConnell Scholar at the University of Louisville and received a master’s degree from Columbia University. The northern Kentucky native lives with his family in Newport. This is his first bid for elective office.

“I’m a lifelong, pragmatic Democrat. I believe in standing up for the working class, for the middle class, trying to advance what makes families better,” says Lehman.
“I promise to take the job seriously and represent the values of our district and the interests of our district to the best of my ability in D.C.”

Republican incumbent Thomas Massie, who has served in Congress since 2012, did not respond to KET’s invitation to participate.

The top issue for the district, according to Lehman, is the opioid epidemic, which he describes as a moral problem that impacts families, the workforce, and the economy. He blames the crisis on American pharmaceutical companies that he says developed powerful new opioids and then illegally marketed them to get people addicted to the drugs. Lehman contends that intercepting illicit drugs coming across the southern border and through western ports only addresses part of the problem.

“We have to deal with the cause of demand and the dependence issues we have in this country,” he says.

On the economy, the Democrat blames inflation on discretionary federal spending and supply chain disruptions during COVID as well as the Russian invasion of Ukraine. Lehman supports American aid to Ukraine because he says it’s important to maintain strong partnerships with democratic counties around the world.

“This is money very well spent, it is in our interest economically as well as our interest morally,” says Lehman, who lived in Germany and Ukraine earlier in his career. “Ukraine’s a major exporter of grain, of fertilizer, of energy sources.”

But Lehman says he disagrees with President Joe Biden’s plan to forgive up to $10,000 in student loan debt for people who make less than $125,000 a year.

“There’s ways to address it without necessarily a large giveaway,” Lehman says. “At this moment in time, the priority needs to be finding ways to make postsecondary education (and) training less expensive and more accessible to people rather than just using the resources of the federal government to forgive things that have already been incurred.”

For those who do carry student loans, Lehman says people should be able to discharge those debts in bankruptcy proceedings. He also wants more opportunities for students to reduce their higher education expenses through commitments to military or community service.

Finally, Lehman says marriage equality and reproductive rights must be protected from what he calls government overreach. He says he would seek to codify abortion rights protections into law. He adds that no one wants more abortions or late-term abortions.

“What we do want is to make sure that women are able to make their own decisions in consultation with their doctor,” says Lehman. “We don’t need the prosecutors involved, we don’t need the attorney general involved.”

Hal Rogers was first elected to Congress in 1980. He has degrees from the University of Kentucky and the UK Law School. Earlier in his career, Rogers was a commonwealth’s attorney in Pulaski and Rockcastle Counties, and a Republican nominee for lieutenant governor. In Washington, he has served on the House Appropriations Committee for nearly four decades, including five years as chairman.

Democratic challenger Conor Halbleib did not meet KET’s criteria for participating in the program.

Rogers says the district has struggled under the weight of a drug addiction crisis, the COVID pandemic, economic disruptions, and natural disasters.

“Our region has been impacted over time with overwhelming problems,” says the Congressman. “We lost 12,000 good-paying jobs during the demise of the coal industry, and now we’ve been hit by this horrendous flood, which is catastrophic in every way.”

In the wake of this summer’s historic flooding, Rogers says he rallied Kentucky’s federal delegation to immediately request a disaster declaration from President Biden. He says he also prodded federal agencies for recovery assistance, securing, he reports, $130 million so far for flood victims plus $65 million in housing assistance and $22 million in flood insurance payments.

Yet nearly three months after the disaster, Rogers says he still receives calls from constituents complaining about the Federal Emergency Management Agency’s response. He says some people are forced to appeal a FEMA disaster relief decision up to five times before they get the assistance they requested.

“That’s unacceptable and we’ll be riding herd on the FEMA from here on out,” he says.

On the greater economic issues facing southeastern Kentucky and the nation, Rogers says he can’t support a federal minimum wage increase without first studying how that would impact small businesses. The Congressman says he wants to continue his efforts to recruit new business and industry to the region. He also points to other development projects he’s introduced during his tenure such as the ongoing Shaping Our Appalachian Region (SOAR) initiative he started with former Gov. Steve Beshear in 2013.

But now Rogers says eastern Kentuckians are struggling with another hit to their pocketbooks: inflation.

“In this difficult economic time, people are trying to survive,” says the Republican. “Gasoline prices through the sky, shopping at the grocery store is an economic tragedy.”

The Congressman blames inflation on Biden administration policies and says “excessive governmental spending” must be trimmed. He says discretionary and mandatory appropriations should be cut, but he does not offer any specifics as to which programs he would reduce.

“We’ll take a look in due course of time,” he says.

But Rogers adds he does not support efforts by fellow Republicans in Washington to cut Social Security or Medicare benefits.

The Republican also blames the president for making the drug crisis and immigration worse.

“The problem the country faces are policies by this administration in allowing the open borders with Mexico,” he says. “We’ve had 2 million illegal aliens arrested in one year. That’s unacceptable.”

Rogers was the only member of Kentucky’s Congressional delegation to vote against certifying the 2020 presidential election results. The Republican says he believes that President Biden was fairly elected, and that he knew his objection wouldn’t change the result of certification. But he also contends there are lingering questions about how some states changed their voting procedures for that election.

“My office was inundated by phone calls, other communications from people across my district questioning the integrity of the presidential election in other states,” Rogers explains. “So on behalf of the people of my district, who overwhelmingly objected to electoral votes tied to allegations of election fraud, (that) drove me to take the action I did.”

With international tensions rising around Russia’s invasion of Ukraine, and China’s threats against Taiwan, Young says he is seeking office to help prevent a world war.

“I think the danger of a nuclear war is higher now than it has ever been in human history,” he says

Young contends that America is to blame for the war in Ukraine, claiming that the U.S. State Department and CIA launched a coup in 2014 to oust the country’s democratically elected president and installed a puppet government of Nazis.

“Now it would be accurate to say that Ukraine is a Nazi dictatorship,” he says.

War in Ukraine could have been avoided, according to Young, if the U.S. and European nations had accepted peace proposals that Russian President Vladimir Putin offered last December. Among other things, that plan said Ukraine would never join NATO. Young calls Putin’s proposal “reasonable” and a “missed opportunity.”

Young also contends that Putin was justified in taking military action because the U.S. has funneled weapons to Ukraine, which Young argues has effectively created a NATO base on Russia’s border.

“So when Russia sent its forces into Ukraine on Feb. 24, 2022, it was not an invasion – it was certainly not an illegal invasion,” says Young. “Russia was acting in self-defense.”

Unless leaders in Washington dramatically change American foreign policy, Young warns the world will unite against the U.S. and isolate the nation, leading to an economic collapse worse than the Great Depression of the 1930s. The candidate also wants to abolish the CIA, alleging the agency has overthrown dozens of governments, tortured countless people, and assassinated many others, including, he claims, former President John F. Kennedy.

“We’ve got 16 other intelligence agencies,” says Young. “Let’s save some money and get rid of the worst one.”

On domestic issues, Young says the war on drugs has failed. He calls for full legalization of marijuana and other illicit narcotics. He also wants to fund harm reduction clinics that would provide a safe environment for people with a substance use disorder to take limited quantities of their drug of choice. These facilities would also offer treatment programs to help people overcome an addiction. Young says his plan makes economic sense.

“The cost is negative compared to arresting these people, locking them up, holding them in jails and prison for years,” he says.

Finally Young calls the recent U.S. Supreme Court decision to overturn Roe v. Wade an attack on women’s rights. He says Roe was the “wisest, best decision of my lifetime,” and the arguments of six current justices to overturn it were illogical and without merit.

“They overturned it for one reason only and that was because they had the votes,” says Young. “They had the raw political power to overturn it, so they did.” 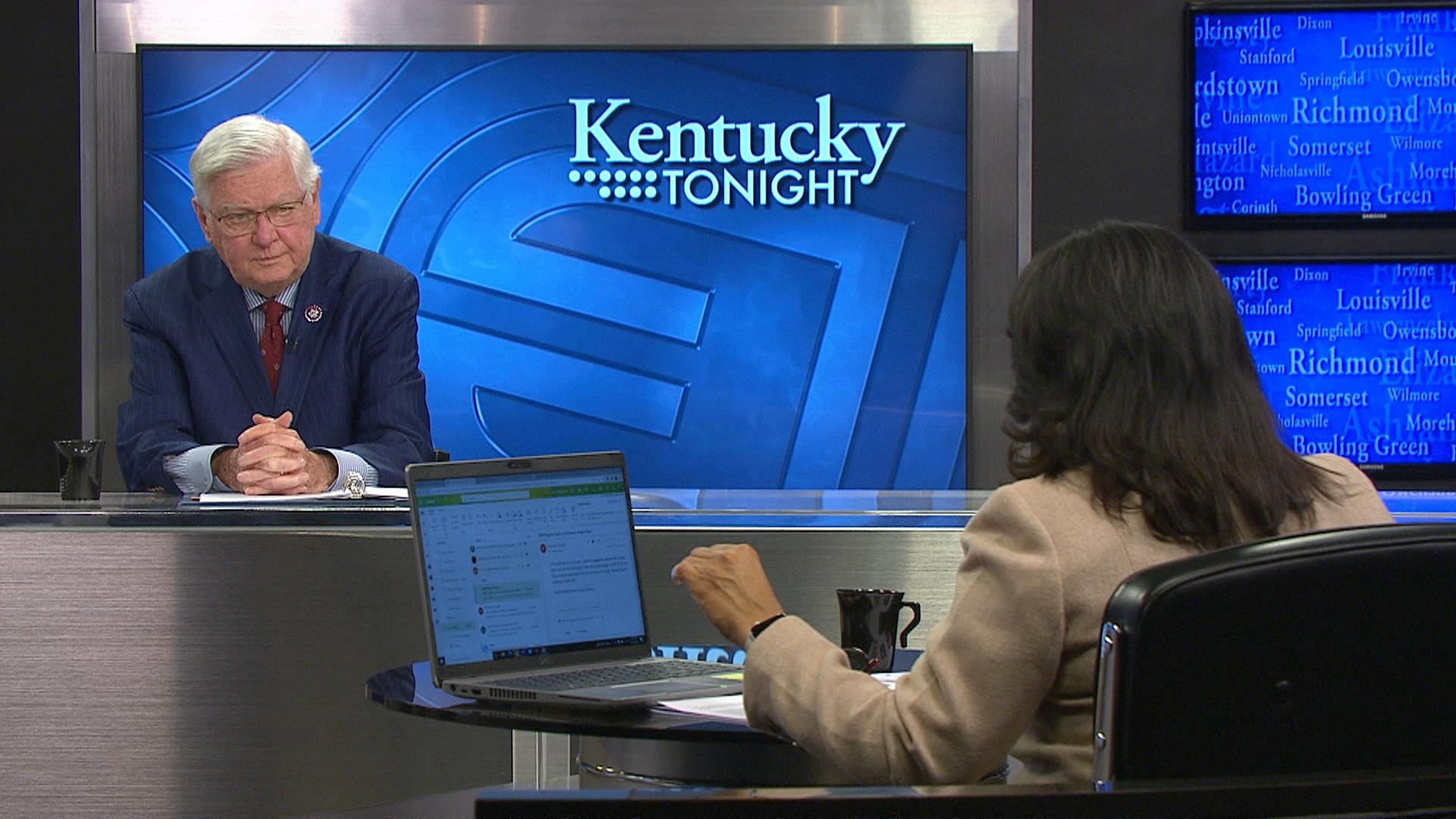