Crafting a New State Budget During a Public Health Crisis

Despite an ever-evolving public health crisis, highly volatile financial markets, and tremendous economic uncertainty, Republican legislative leaders in Frankfort say they plan to gather lawmakers into session for the next two weeks and complete a new biennial budget for the commonwealth.

“The budget we have in effect right now lasts until the end of June, so we have window of time to pass the right budget for the people of the commonwealth, and we intend to do that,” says Senate President Pro Tem David Givens (R-Greensburg). “But trust me, we’re wise to the fact that things are changing and very fluid.”

The GOP leadership decision to push ahead comes amid calls from the Donald Trump Administration to limit gatherings to no more than 10 people in hopes of slowing the spread of COVID-19, the highly contagious coronavirus disease. The state House has 100 members and the Senate, 38.

“I don’t know that asking 138 people from every community in the commonwealth to come together in one building is the smartest thing we should be doing right now,” says Senate Minority Floor Leader Morgan McGarvey (D-Louisville). “We should be protecting our members and our employees by taking the same precautions we’re asking everyone else to take.”

If lawmakers must meet, McGarvey says they should limit in-person interactions by employing video conferencing technology.

House Democratic leaders urged their members to stay home if they are 60 or older, have health concerns, or if they live with someone who fits those categories. The statement from House Democratic Floor Leader Joni Jenkins and her colleagues also said that if the General Assembly is to convene, lawmakers should only work on the state budget and coronavirus-related relief measures.

Sen. Robin Webb (D-Grayson), who is a member of the Senate Appropriations and Revenue Committee, agrees with that approach.

“There’s very few critical pieces of legislation that we need to pass in my opinion,” says Webb. “I would like to see more of a budget process.”

The House passed its version of the state budget on March 6. Senate Budget Chair Chris McDaniel (R-Taylor Mill) says he’s optimistic that the Senate version of a spending plan will emerge from his committee and get a floor vote by the end of this week.

Then that document will go to a conference committee comprised of members from both chambers to resolve the differences between the House and Senate spending plans. Upon final passage, the budget will go to Gov. Andy Beshear for his review and possible line-item vetoes.

And lawmakers are on a tight deadline.

“We’re constitutionally bound as to passing a balanced budget by April 15,” says McDaniel. “We have to continue to move forward.”

Economic Forecasting in a Time of Pandemic

House leaders crafted their budget before the full impact of COVID-19 hit the United States. McDaniel and other Senate Appropriations and Revenue Committee members now face a very different circumstance.

“We’re really focused on this virus, how it’s impacted the commonwealth and how we’re going to appropriately address it,” says McDaniel. “We’re trying to do the best that we can with uncertain information.”

Lawmakers must build their budgets based on economic projections that the Consensus Forecasting Group (CFG) provides the General Assembly. But the forecasts that Gov. Andy Beshear and the House used for their respective budget plans are from last December.

“We can’t just pull a number out of the air and say we think economy is going to be down 15 percent, or 3 percent, or 8.5 percent,” says Givens.

Webb says she fears the new numbers may be of little value.

“I don’t know of a forecast that’s reliable in this amount of time with as many moving parts as we have,” says Webb.

Givens says the state is actually in decent financial shape – at the moment. He says revenues are balanced among income, sales, and property tax receipts. Plus he says the Budget Reserve Trust Fund is “very healthy” and the state does not currently carry too much debt.

“We’re at a good place to make some tough decisions,” says Givens. “I certainly wish we didn’t have to make them.”

McDaniel says his priority is proper funding for public safety, including law enforcement, first responders, and frontline social service workers. Then there’s pension funding: $1.2 billion a year for the Kentucky Teachers’ Retirement System, and $560 million a year for the state employees plan.

“Not funding [the pension systems] is not an option because we will continue to leave this problem for future generations,” says McDaniel. “We started addressing it. We’re going to address it until it’s finished.”

The budget chair would not rule out benefit changes to future teacher hires, nor would he commit to pay raises for teachers and public employees. But McDaniel days say he hopes those increases can remain in the final budget.

Even if sports betting could win passage, revenues from such activities would be unpredictable since collegiate and professional athletic events have been cancelled for the foreseeable future.

Givens argues that the best way to boost state coffers is to grow the tax base. But if the economy grinds to a halt for weeks or months, any tax revenues would also take a hit. As for increasing tax rates, as some Democrats have proposed, McDaniel says that’s a bad idea.

McGarvey says lawmakers could also look at ending some tax expenditures and other incentives given by the state. A bill sponsored by Republican Rep. James Tipton would create a Tax Expenditure Oversight Board to conduct annual reviews of exemptions, some of which have been on the books for years.

Webb says now more than ever, lawmakers must work collaboratively between the two chambers and across partisan lines.

“This party stuff has got to evaporate – we’ve got to come together, craft a plan, and allow flexibility in these unknown times,” says Webb. “Flexibility is a key word here. I hope that there’s more flexibility for the executive branch to adapt and respond.”

If COVID-19 issues prevent lawmakers from completing a budget before the session ends on April 15, they could continue their work during a special legislative session called by Gov. Beshear.

Even so, Givens and McDaniel continue to hold fast to their desire to conclude the budgeting process during the regular session.

“We’d like to be finished with our budget work by the end of next week and that’s difficult timeline,” says Givens. “We want to strike the balance between doing it right and doing it fast, and ultimately doing it fast is not the best choice. We need to do it right.”

On the Democratic side, McGarvey says he wants lawmakers to maintain their legislative independence when it comes to the task of appropriating the state’s money. But he says they also have an obligation to protect the health and well-being of legislative staff.

“I hope that no-one is thinking politically right now – we’re talking about people’s lives,” says McGarvey. “If the most responsible thing for us to do is to make an agreement to come back here and do a budget in May or June, then I think that’s something we should look at.” 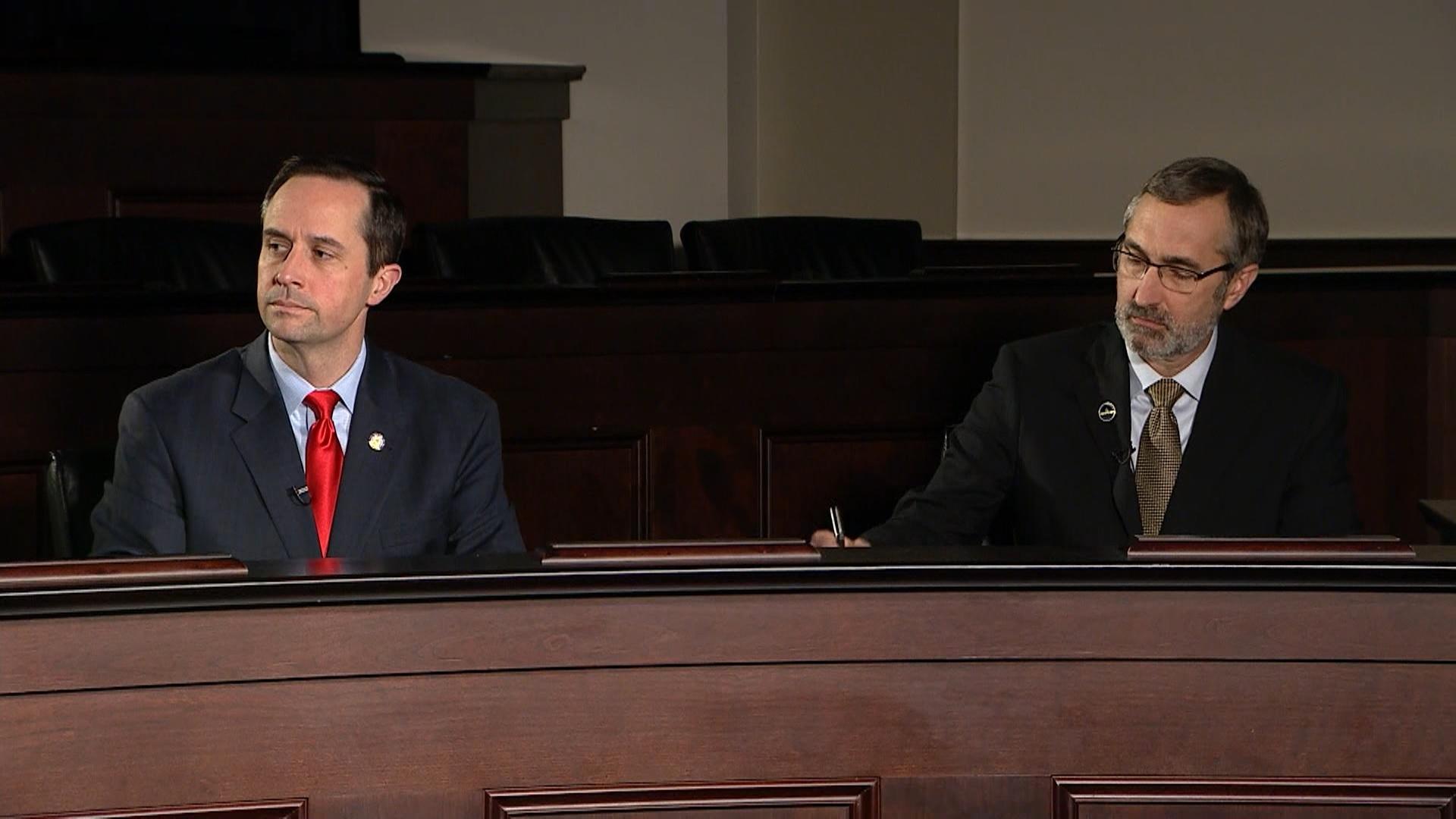