Even after multiple interest rate increases by the Federal Reserve, inflation continues to stubbornly grip the economy and pinch the buying power of Americans.

“It’s kind of left people in a very rough spot because at this point, wages have not been keeping up on inflation and nor have returns to capital,” says economics professor John Garen of the University of Kentucky Gatton College of Business and Economics. “So it’s a real problem.”

Garen blames inflation on too much money chasing too few goods, which he attributes to generous COVID-19 relief packages from the administrations of former President Donald Trump and current President Joe Biden, as well as to Federal Reserve monetary policy. He also says regulations under Biden are reducing domestic fuel supplies and driving prices up even more.

Global events have also pushed inflation, according to Jason Bailey, executive director of the Kentucky Center for Economic Policy. He points to the Russian invasion of Ukraine, which he says has disrupted food and energy markets, and to business closures and supply chain interruptions during the early phases of COVID.

“The pandemic itself scrambled the types of consumption that people had, so people were buying less services and more goods,” says Bailey. “That is really what spurred the inflation.”

With demand outpacing supply, producers raised prices on their goods. But Bailey argues that some companies went far beyond what they needed to cover costs. He says the Federal Reserve Bank of New York reports 40 percent of price increases have gone to corporate profits, which he says is far more than usual. Bailey says that flow of extra cash has driven CEO bonuses and stock buy-backs while also nudging inflation higher.

But Charles Aull, executive director of the Kentucky Chamber Center for Policy and Research, says many economists, including Treasury Secretary Janet Yellen, reject the idea that corporate profits fuel inflation. He says higher prices are driven by consumer demand fortified by pandemic stimulus packages that continue to pump money into the economy. He says Americans also put significant sums of money into savings during COVID.

“Throughout the course of the pandemic, Americans saved about $2.2 trillion above baseline,” says Aull. “We still have around $1.5 trillion of that to go and as those dollars continue to be spent, that’s going to continue adding inflation.”

Higher prices aren’t just an American phenomenon. Countries around the world are experiencing inflation as costs soar for energy, food, and other goods. But Janet Harrah, senior director of the Center for Economic Analysis and Development at Northern Kentucky University, says the U.S. has exported its inflation elsewhere as the dollar has become stronger against other currencies. She contends government spending from the CARES Act and American Rescue Plan to infrastructure spending and student loan debt relief will likely continue to drive inflation for some time.

“The government is putting money into the system as the Federal Reserve is trying to raise interest rates to get the demand to go down,” says Harrah. “So right now, the fiscal policy and monetary aren’t really working together very well.”

The Downside of Interest Rate Hikes

The Fed has already raised interest rates five times this year, with a sixth hike expected in early November. Although some economists think inflation may be peaking, it still remains stubbornly high. Which begs the question: How much farther is the Federal Reserve Board willing to go to tame the economy?

Federal Reserve Chair “Jerome Powell has basically said we’re going to raise interest rates until the unemployment rate starts to rise, because as people lose their jobs, their spending will go down, and the demand for goods and services will go down, relieving inflation,” says Harrah. “It’s a very blunt instrument to bring down inflation.”

Bailey agrees, likening interest rate hikes to taking a sledgehammer to the economy. He says higher rates are especially damaging to the housing market: homebuyers face higher mortgage interest rates, new construction slows, builders lay off workers, and the supply of affordable housing tightens. He also fears that the rapid pace of rate increases, which he says is the fastest since the 1980s, will result in high unemployment and an economic recession. He says that would be especially hard on low-wage employees and workers of color.

“There’s the potential that we create long-term economic damage from a recession,” says Bailey. “Some people will be hurt a lot, but all workers will be hurt to the extent that if the unemployment is up, wages won’t keep growing like they do in a tight labor market.”

If the economy slips into recession, Bailey contends it’s unlikely Congress would pass any additional relief packages after the trillions they spent on COVID aid. Without that kind of intervention, he says Americans could be stuck with a prolonged period of high unemployment and high inflation.

Aull says the good thing about the Fed is that its board of governors can cut rate interest rates just as quickly as they raised them. He also argues that the economy can withstand small increases in unemployment, given how low jobless figures are now. Aull says Kentucky’s current unemployment rate of 3.8 percent is a record low. Even if it increased 1 or 2 percent, he says the rate would still be comparable to what the state experienced in the years prior to the pandemic.

“I don’t want unemployment to go up,” says Aull. “But I do think we need to moderate a little bit of the doom and gloom in this type of situation because the economy has been running so, so hot that a slight cool down could potentially look like a more recognizable economy.”

Garen says he thinks the economy will cool with slower growth in the gross domestic product (GDP) and a small increase in unemployment. But he says those factors could be mitigated by increased supplies of consumer goods and a loosening of government policies on energy production and other sectors

“Returning to a low inflationary environment where we don’t have onerous regulation, so that entrepreneurs can grow their businesses and it’s profitable for them to give opportunities for folks,” says Garen.

With a problem so complex, what else beyond interest rate hikes could both reduce inflation and prevent the economy from slipping into recession?

Bailey suggests overhauling supply chains to help them better withstand the increasing risks posed by climate change-driven natural disasters. He also says Congress should investigate price-gouging among certain industries like oil producers, which he says have enjoyed $100 billion in profits in the last two quarters alone.

Harrah counters that the price controls are bad for both the companies making goods and the consumers who buy them. She also says while some corporations have reaped enormous windfalls, others are struggling to make any profits at all. Garen says it would be a “political nightmare” to put Congress in charge of deciding which businesses are charging too much, and that a competitive economy is the better solution to price-gouging concerns. He also advocates for reducing tariffs, which he says interrupt the flow of goods that are produced more efficiently overseas.

While it may not directly help inflation, allowing more immigration would help the labor market shortage, argues Aull. He says immigration policy could target skilled workers most needed by certain industries. Bailey warns that using more immigrant labor could depress wages for American workers already struggling to keep up with inflation.

The panel agrees that moving more Kentuckians into the labor market will help keep the state’s economy on track. There are about 160,000 jobs open in the commonwealth now, and Aull says another 30,000 could be available soon with new factories and businesses opening in the near future.

“We’ve got to go after some of those big barriers to work to allow more Kentuckians to participate in the workforce,” he says. “Otherwise, I am not sure how we’re going to fill all these jobs that have been coming in.”

Bailey advocates for more state investments in education, infrastructure, and health care. He says Kentucky doesn’t need more jobs, but rather more good jobs that pay above what he calls poverty wages.

“We need to keep people healthy and alive,” says Bailey. “We need to make it so that people can afford to have children, and that means having a decent wage.” 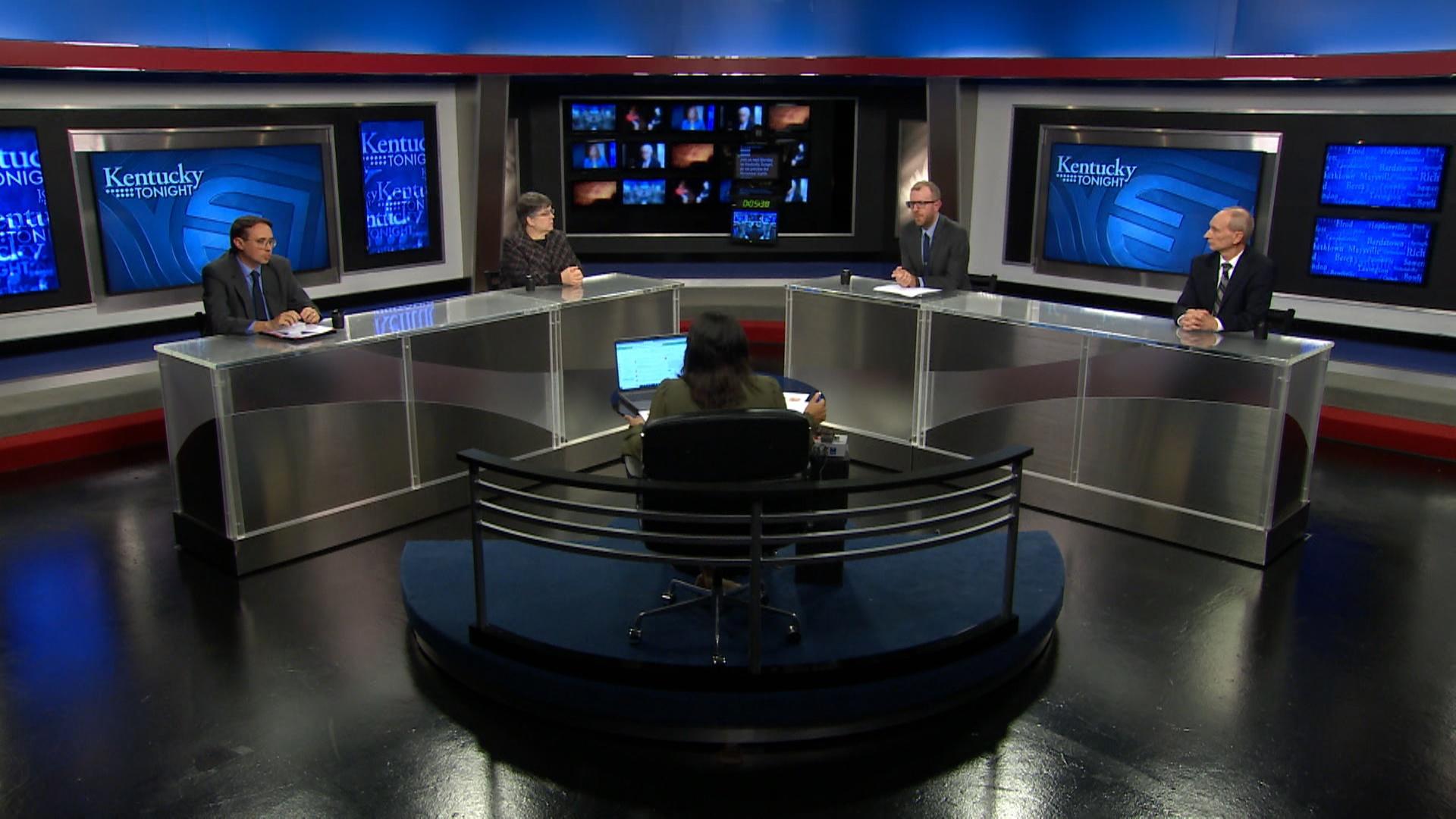