As state lawmakers convene in Frankfort for the start of the 2022 General Assembly session, they face a to-do list packed with many familiar items, including crafting a two-year budget, medical marijuana, and school choice, as well as a few new issues, such as tornado relief for western Kentucky, spending federal infrastructure dollars, and critical race theory.

But all of those proposals will have to wait while Republican leaders devote the first week of the session to passing the new maps they’ve drawn for state legislative and judicial districts and Congressional districts. House and Senate leaders are expected to introduce bills on Tuesday with their respective map.

“Every single district that we have is entirely contiguous and as compact as possible given the variables of population across the state,” says House Speaker Pro Tem David Meade (R-Stanford) of the state House district map.

Under the House plan that leadership previewed last week, Hopkins, Henderson, and Barren Counties now each comprise a single House district. Meade says the number of districts with a majority of minority voters increased from two to four, and another two districts will see increased minority influence. He says four incumbent Republicans will have compete for new seats, two in western Kentucky and two in the mountain region. Two sets of Democratic representatives in Jefferson County will have to run against each other as well.

“There are numerous problems with the map,” says House Minority Whip Angie Hatton of Whitesburg. “There’s excessive splits that were unnecessary. Fayette County increased in population but lost a [representative]. They used to have 10; now they only have nine.”

The League of Women Voters of Kentucky has also questioned how Laurel and several other large counties have been partitioned under the Republican plan. Meade says the more districts a county has, the more representation and therefore the more influence they will have in House chamber.

Hatton also says five of the eight districts set to be combined currently have female representatives. She fears that will result in even fewer women in the House, where they currently comprise less than a third of the membership. Hatton says there is no need to rush the approval process through the first week of the session. Since the current candidate filing deadline is this Friday, she says many potential candidates won’t even know what the new districts will look like. Instead, she suggests keeping the existing districts in place for this year’s elections and approving the new districts later.

But Senate Majority Floor Leader Damon Thayer says running under the current districts would be “calamitous.” The Georgetown Republican says the population shifts that have occurred in Kentucky since the last census make the old districts unconstitutional. In addition to approving the redrawn maps this week, Thayer says Republican leaders also plan to pass an extension of the candidate filing deadline to Jan. 25.

The public is expected to get their first look at the new state Senate map and the new Congressional district map on Tuesday. Thayer says the League of Women Voters and Jefferson County Democrats both had opportunities comment on the proposed state Senate map.

“This is unprecedented input by the minority party,” he says. “The Senate Democrats were treated quite fairly, but the most important aspect is these maps will meet the statutory and constitutional requirements, both on the federal side and the state side.”

But Democrats elsewhere in the state had no input, according to Lexington Sen. Reggie Thomas.

“There are 119 other counties that are going to be impacted by the Senate drawing, other than Jefferson County. We had no input on that,” says Thomas. “There wasn’t enough transparency or opportunity for bipartisanship in this whole process.”

As for the new Congressional districts that Republicans will propose, Thayer says there won’t be any surprises. He adds that Jefferson County Democrats should “be fine” with how the new map draws the 3rd district around Louisville.

In addition to crafting a new, two-year budget for state government, lawmakers must also decide how to allocate a projected revenue surplus of more than $1 billion as well as billions in federal infrastructure and pandemic relief funds.

Thayer says the infrastructure money will funnel through the state’s Road Plan and could be used for three significant projects: The Brent Spence Bridge in northern Kentucky, the Mountain Parkway, and Interstate 69 in western Kentucky.

When it comes to the state surplus and the $1.1 billion in unspent American Rescue Plan Act funds, Thayer says Republicans want to focus that money on public pension debt and the state’s Rainy Day Fund.

“We think that we need to be very cautious the way we move forward because we think that this economy is being propped up artificially by these dollars from the federal government,” says Thayer. “We don’t think it’s a good idea to just start spending this money like the free candy that we’ve been getting from Washington, D.C.”

But Democrats argue that it’s irresponsible to squirrel that money away after a decade of cuts to vital public services.

“We’ve got an opportunity to make huge investments in this state,” says Thomas, “and the most important investment we can make as Kentuckians is in our children.”

“Both parties understand that caution is necessary in very uncertain times and that we’re the stewards of the taxpayer’s money,” Hatton says. “But we’re at a turning point in Kentucky.”

Thayer says he would love to provide cost-of-living adjustments to state employees, but he contends the state can’t afford to do that when it’s already drowning in pension debt.

With the uncertainties presented by the lingering pandemic and inflation, Meade says he favors saving much of the surplus funds while exploring a limited amount of prudent spending.

“We’re probably going to make some additional investments in education, in justice, in health and family services, those areas, but we’re going to make sure that we prop up that Rainy Day Fund,” says Meade. “We can’t use this one-time federal money in order to make long-term appropriations. We have to do those things out of the [tax] revenues that the state will receive.”

Lawmakers are exploring ways to help communities in western Kentucky devastated by the recent tornados. Meade says legislative leaders met with Gov. Andy Beshear to discuss options for a state aid package but have not yet landed on a dollar amount. Meade says they need more information about how much federal disaster relief will ultimately come to those areas.

Other Issues Ahead for Lawmakers

Meade and Thayer say Republican leaders want to continue to transition the state’s tax system away from income and corporate taxes to more consumption taxes. Thayer says he would like to eventually have no income tax in the commonwealth. But he says it’s probably more realistic to get to a 3 percent income tax, which he says would put Kentucky on par with Indiana.

Hatton says Kentucky’s current combination of income, sales, and property taxes has provided the revenue needed to keep the state economy stable through the pandemic. She contends states that rely largely on consumption taxes have struggled more during COVID.

Among the priorities for Democrats, according to Hatton, is passage of medical marijuana legislation. The House has approved such bills in previous sessions, only to see the proposals die in the Senate. Three dozen states and the District of Columbia already allow some form of medicinal marijuana use.

Although polling indicates the vast majority of Kentuckians favor the idea, Meade says he’s still undecided on the issue until he sees the legislation proposed for this year’s session. Thayer says he personally opposes such legislation and he still sees no energy for it in the Senate. He says he fears legalizing medical marijuana will lead to allowing recreational marijuana. He adds that if his constituents disagree with his stance, they can vote him out of office.

Thayer says Republicans also plan to push a new school choice measure to extend the scholarship tax credit option to all 120 counties. The courts rejected a previous measure that applied to only the state’s largest counties. He says his members are also drafting legislation on name, image, and likeness deals for college athletes, incentives to encourage students to study health care professions, and to give school superintendents the authority to hire principals.

Republican leaders are also expected up to take up a procedural change that would limit the time allotted for floor debates on issues. Hatton describes that proposal as a “final nail” in the coffin of the democratic process to pass legislation. 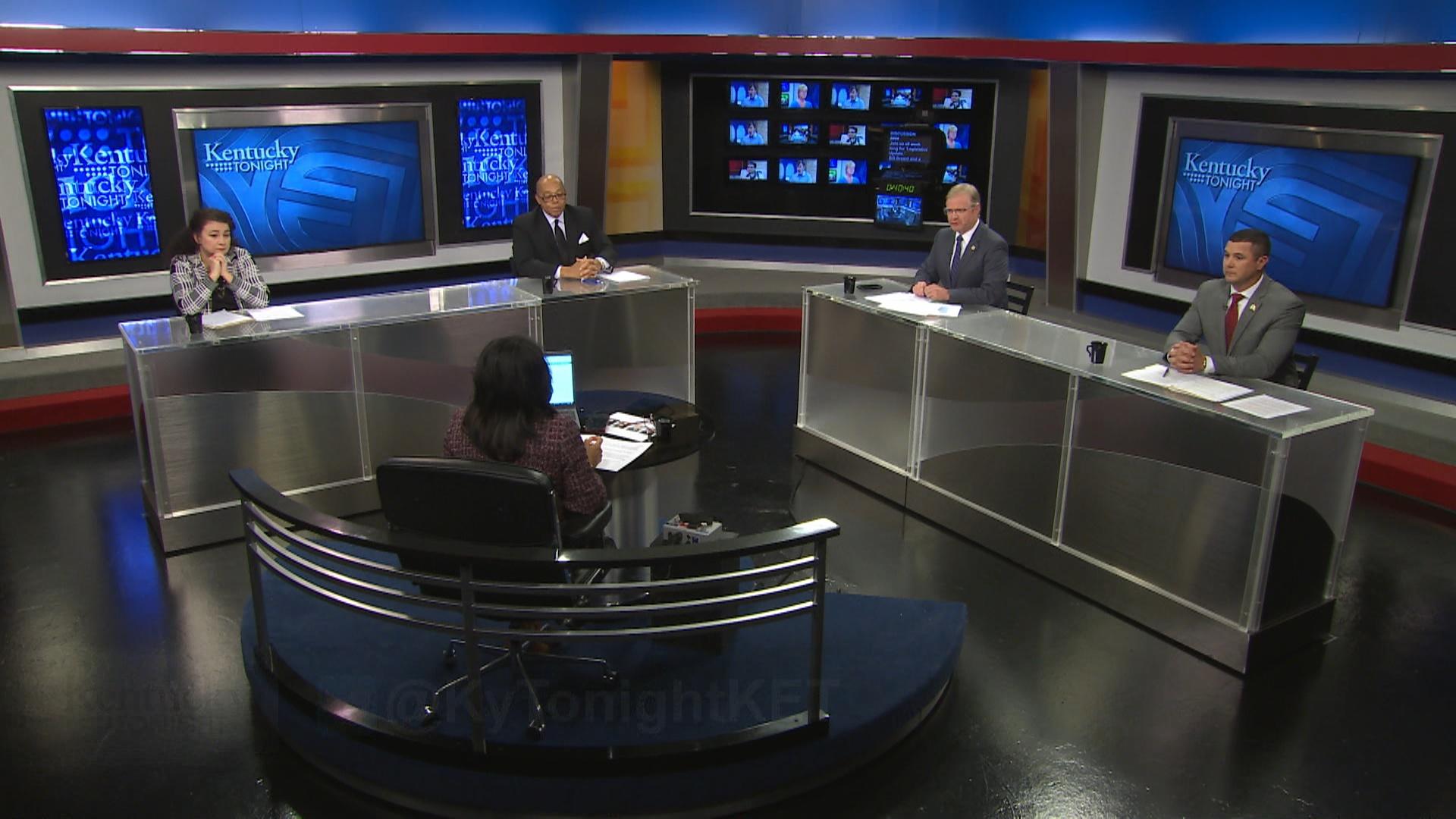