Recent news reports have revealed a litany of horrors at state-run juvenile justice facilities around the commonwealth. There have been security breaches, riots, fires set, injuries to staff and detainees, unsanitary conditions, an alleged sexual assault, and at least one escape.

State officials blame the incidents on chronic understaffing at Kentucky’s eight secure detention centers as well as youth development centers, group homes, and day treatment programs that comprise the juvenile justice system. They also say more of the youth incarcerated in the system have committed more violent crimes, have serious mental health issues, or are involved with gang activity.

In the opening days of the 2023 General Assembly session, legislators formed a special working group to study staffing, safety, administrative oversight, and other issues within the system, and report their findings to lawmakers when they reconvene in early February.

Gov. Andy Beshear took his own steps in recent weeks to address the crisis. He raised the starting pay for youth workers from about $35,000 a year to $50,000. He wants to provide those workers with defensive weapons like pepper spray and tasers so staff can better protect themselves and detainees. And he ordered offenders be segregated by gender and severity of their alleged crimes instead of grouping them geographically.

Lawmakers and youth advocates agree action must be taken and applaud efforts to improve staffing within the system. But they question some of the governor’s other recommendations.

“It’s wrong-headed and I think it’s going to create more problems than it solves,” says Sen. Whitney Westerfield (R-Fruit Hill), who is chair of the Senate Judiciary Committee.

“What we need to do is not have knee-jerk reactions in terms of focusing solely on incarceration and detention,” says Rep. Nima Kulkarni, a Democrat from Louisville.

Rehabilitation or Detention and Punishment

Underlying the response to the juvenile justice crisis is a debate about mission. Kentucky Youth Advocates Executive Director Terry Brooks says the system should focus on safely rehabilitating troubled youth so they can live productive lives. But he says he’s encountered lawmakers who believe the system should be oriented toward punishment.

“I was sad to hear that kind of conversation come out of Frankfort in 2023,” says Brooks.

Westerfield admits that opinion is still present among a few of his legislative colleagues. He says the current focus on punishment through incarceration is the result of the violence that has erupted at youth detention centers in Adair, Jefferson, McCracken, and Warren Counties. But he says only relying on confinement is more expensive, and doesn’t help the youth offenders.

“The response to juvenile misconduct can be so much more impactful with community-based programming and the direct interventions,” says Westerfield.

Kulkarni agrees, saying legislators, the governor, and juvenile justice officials should focus on root causes of a youth’s criminal behavior, the trauma they experienced that contributed to that activity, and what kind of supports they need to get their lives back on track.

“We cannot focus all of our money, all of our policymaking on detention alone,” says Kulkarni. “Decades upon decades of research have shown that detention does not increase public safety, it does not result in a decrease in delinquent behavior but it does increase exponentially the amount of re-arrest and re-incarceration that you see in these kids.”

Beshear wants the most serious offenders – those charged with capital crimes or Class A, B, or C felonies – housed at regional detention centers in Adair, Fayette, and Warren Counties. Youth under the age of 14 or those who face lower-level offenses would be sent to centers in Boyd, Breathitt, Jefferson, and McCracken Counties.

Grouping youth based on the severity of their offenses makes sense on one level, according to Josh Crawford, director of criminal justice initiatives at the Georgia Center for Opportunity. He says that makes it easier to provide the specific kinds of counseling and rehabilitation services high-risk offenders need. For example, he says it takes at least 200 hours of intensive, direct interaction with serious offenders to even have a chance of turning their lives around. But he says Kentucky simply isn’t prepared to provide that level of support.

“Oftentimes the best place for a serious offender who’s a child and is also high risk to get that kind of programming is in a secure facility,” says Crawford. “But with the staffing issues the way they are, with the violence the way that is, that becomes next to impossible.”

Another downside to grouping inmates regionally is that it likely means taking those youth farther away from their families and community supports that Crawford says are crucial to helping offenders once they are released.

After a riot and fire at a detention center in eastern Jefferson County, state officials temporarily closed the facility last year and moved those detainees to rural Adair County, two hours away. Rep. Jason Nemes (R-Louisville) says it makes no sense to take those youth far away from their families, their attorneys, and rehabilitation opportunities more readily available in a large city.

“We have to bring a facility back in Louisville,” says Nemes. “That would solve a lot of our problems.”

Gov. Beshear also called for two new, state-of-the-art juvenile detention centers. Kulkarni fears that will only “double-down” on existing problems within the juvenile justice system and lead youth into years of incarceration.

“We’re going to focus more on the corrections aspect of it and create mini-jails so that all we’re doing is facilitating the pipeline where these kids are going to go from juvenile detention into adult prison with zero rehabilitation,” says Kulkarni.

Nemes agrees that these youth need opportunities and programs to rehabilitate. But he says public safety is also a crucial factor, especially in the state’s largest city.

“Violence is out of control – when you talk to [Louisville Metro Police], they’re saying it’s led by juveniles,” says Nemes. “So we have to get the violent element out of our streets for two reasons: One, to protect our community, but also to grab that kid and say, hey, let’s help you.”

With as many as 40 percent of state juvenile justice jobs unfilled, the move to raise youth worker salaries is much needed, according to Westerfield. He says some of the recent violence in detention centers likely stems from the youth knowing the facilities are understaffed and the workers are unarmed. He says that also contributes to youth being locked in their cells for days at a time with only occasional breaks to shower.

But the senator is concerned with how Beshear’s pay raise would be implemented. Westerfield says the governor wants to freeze hiring in one part of the Department of Juvenile Justice (DJJ) to raise salaries for those who work at detention centers. The Republican says he supports the pay increase – which he says he would boost to as high as $70,000 a year – but he argues it should apply to all juvenile justice workers. He also contends it would be easy to fund the raises.

“Find a road project that doesn’t need to be built this year and you’ve paid for it right there,” says Westerfield.

Along with more staffing, Westerfield and Nemes say there must be better transparency and communication within DJJ. They say they’ve heard from workers who have reported unsafe conditions for staff and detainees, but then that information fails to reach agency superiors or Justice and Public Safety Cabinet Secretary Kerry Harvey. The lawmakers also say it’s difficult to get information from executive branch officials about what’s happening within the system and its facilities.

Rep. Keturah Herron (D-Louisville) says turnover in DJJ leadership is another problem. She says the agency has had eight different commissioners since 2008, and none of them have served longer than two years.

“DJJ is chaotic right now,” says Herron. “So my belief is what we’re seeing inside the detention is the youth are responding to what they’re coming into.”

In addition to boosting detention staff pay, Beshear wants to supply those workers with tasers, pepper spray, and other items they could use to defend themselves and prevent rioting youth from hurting other detainees. Nemes is astounded that DJJ officers don’t already have these kinds of tools to help maintain safety and order.

“To say that they can’t even have the opportunity to defend themselves, to defend others? We need to get real here,” says Nemes. “Are they supposed to defend these other kids with spitballs?”

But Herron contends that detention staff shouldn’t be armed. She says she worked at a juvenile center in South Carolina that housed serious offenders. Yet she says the officers had neither uniforms nor weapons.

“I don’t think that there needs to be pepper spray and tasers inside a facility,” says Herron. “I think that when that happens, we’re going to see more issues and more kids get hurt.”

Rebecca DiLoreto, who teaches family law and children and the law at the University of Kentucky Rosenberg College of Law, agrees.

“To think that [defensive weapons] solves the problem is in error,” she says.

A better approach, according to DiLoreto, is to move low-level offenders out of detention and into foster care, implement comprehensive mental health services and trauma-informed care at all DJJ facilities, and re-open the Jefferson County detention center so that Louisville-area offenders can be housed closer to their families instead of being held hours away in rural Kentucky.

Brooks also says rehabilitation support and counseling needs to be provided at all DJJ facilities, not just the detention centers. He acknowledges that will take staffing and funding, but he says the state could contract with non-profit organizations that have expertise in trauma-informed care, and could secure federal matching dollars to help pay for those services,

Piecemeal efforts to address specific problems may help in the short term. For example, Crawford says boosting pay will help with staff recruitment and retention. But he says that’s not nearly enough to tackle the core problems facing a juvenile justice system that he contends is failing these youth. 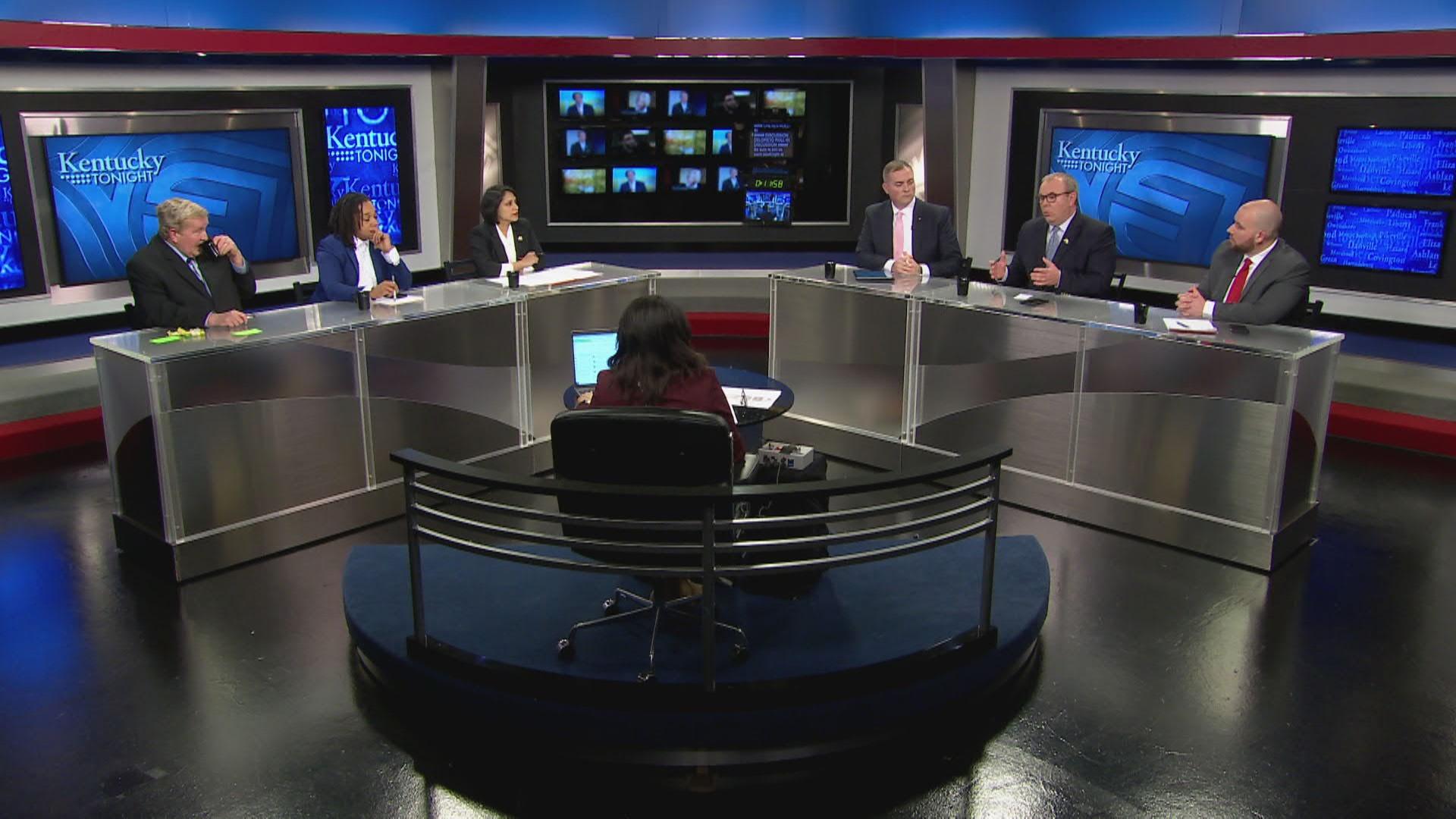