Even though lawmakers are on break between parts one and two of the General Assembly session, the work of crafting and considering legislation continues.

Tax policy is a key agenda item for the Republican supermajorities in the state House of Representatives and Senate. During the opening days of the session, the House passed a measure that would further lower the individual income tax rate from the current 4.5 percent to 4 percent effective Jan. 1, 2024.

“The impact statement I think showed that about $625 to $650 million will stay in the pockets of Kentuckians,” says House Speaker Pro Tem David Meade (R-Stanford). “So we’re looking at setting up that framework to continue down the path of hopefully reaching a 0 percent income tax in the future.”

Last week, the lower chamber passed House Bill 1 on a vote of 79-19, with Democrats objecting to the measure. House Minority Floor Leader Derrick Graham of Frankfort argues a further reduction in state income tax revenues at a time of economic uncertainty and the end of federal pandemic relief could put critical funding for education, infrastructure, and social services at risk.

Louisville Democratic Rep. Lisa Willner has proposed an alternative tax measure that would create a graduated tax structure starting in 2024. Under her House Bill 111, Kentuckians would pay either a 4, 5 or 6 percent income tax rate depending on their level of income. The more an individual earns, the higher their tax rate. (The state taxed personal incomes at 6 percent for decades prior to legislative actions in recent years to lower the rate.)

Willner contends her plan will be fairer to Kentuckians, while not putting much-needed state revenues at risk.

Meade says the House has not yet discussed Willner’s proposal, but he argues that the state can afford to continue to lower the overall income tax rate. He says Republican policies are boosting state revenues through economic growth, and that budget forecasters have already accounted for the end of federal pandemic dollars.

As HB 1 awaits action in the upper chamber, Senate Minority Floor Leader Gerald Neal says he’s not concerned about another half-percent drop in the tax rate so much as Republicans’ ultimate goal for taxation.

“We’re talking about doing away with the tax all together and then shifting the piece to a sales tax or a consumption tax of some sort, which actually is a regressive tax burden,” says Neal.

That means lower-income individuals would face a higher tax burden, according to Neal, since they would pay a greater percentage of their earnings to sales taxes than would wealthier Kentuckians.

But Senate President Robert Stivers (R-Manchester) says Republicans plan to structure consumption taxes in such a way that higher income individuals will pay more based on their discretionary spending.

Once lawmakers return on Feb. 7, Stivers says HB 1 will probably be the first measure the Senate passes. The Senate President also says lawmakers will likely act to prevent the gasoline tax from increasing as well. Gov. Andy Beshear issued an executive order last summer to delay a 2-cent increase in the gas tax. That order is set to expire this month.

Two bills to allow the use of medicinal cannabis have been filed so far this session: House Bill 107 is sponsored by Graham and other Democrats. Senate Bill 47 is a bipartisan measure sponsored by Sen. Stephen West (R-Paris).

Stivers says he has become “the poster boy” that medicinal-use advocates “throw darts at” because of his reluctance to bring such legislation to a vote in the upper chamber. He says he and his colleagues know the gravity of the issue and take very seriously the desire to help terminal patients.

“I am working on it with others to try to figure out how we can get to a yes to take care of those individuals who are at end-of-life,” says Stivers.

The Republican adds that he wants to ensure there are strict controls on prescribing and dispensing medicinal cannabis products, and that patients are protected from potential harms that marijuana use might cause.

“We want to make sure we do it the right way, if it is done,” says Stivers. “There’s indicators out there that certain things are helped. There are (also) indicators that there are adverse consequences.”

Stivers says he also wants to see the results of medical research from the University of Kentucky Cannabis Center, which are due next year. But Neal says he believes there is already sufficient data to support legalizing medicinal marijuana use in the state.

“We should get on with it because we know that it is a benefit to a number of people,” says Neal. “The question is making sure there is not the abuse, I agree with that... But there are systems that are out there to do that. I don’t think it’s as complex as we might make it.”

The spending plan passed by lawmakers in 2022 included an 8 percent pay raise for state employees this fiscal year. The document also appropriated funds for a 12 percent raise in the second year of the biennium, which would be allocated based on the results of a compensation study to be conducted by the Kentucky Personnel Cabinet.

Stivers says the goal wasn’t necessarily to provide a 12 percent, across-the-board raise for all state workers, but rather to see which workers might get a higher or lower raise based on job duties, experience levels, and local costs of living.

The Personnel Cabinet told KET it provided lawmakers with “a comprehensive, 44-page compensation report that included a specific plan on how to provide additional raises to state employees.”

But Stivers says that plan only calls for a 6 percent across-the-board pay increase for all executive branch employees. Stivers and Meade say legislative leaders expected a much more detailed report of what raises specific job sectors should receive with 12 percent being the average of all the increases. The leaders say they requested and received such reports from the legislative and judicial branches.

The original legislation mandating the Personnel Cabinet report included a substantial penalty for failing to provide lawmakers with the requested data. Stivers says that could be done by revisiting the current state budget and reducing the cabinet’s appropriation. But Meade says lawmakers will continue to push the cabinet for the numbers they need so they can allocate the pay raises before the end of this legislative session.

Senate Bill 45, a bipartisan measure cosponsored by Neal and Republican Senators Stephen Meredith and Julie Raque Adams, would abolish the death penalty in the commonwealth and replace it with life imprisonment without parole.

Neal admits he supported capital punishment earlier in his legislative career, but after studying the issue more he concluded the death penalty should never be an option.

“I don’t think that’s appropriate,” says Neal. “I think that we are better than that as a society.”

Meade says he’s also had a change of heart, going from a death penalty supporter to not knowing where he stands, especially after meeting people who have been wrongly convicted of crimes.

“I’m a little torn on it just because this one weighs quite heavy on me because it’s a big decision,” says Meade. “As a lawmaker, you would be making the decision whether or not to take someone’s life, and it’s not an easy decision to make.”

“If a person commits a crime, if they stay in jail, that’s a punishment in itself,” says Graham.

As an attorney who has been involved with death penalty cases, Stivers says there are some criminals who deserve to face the severest consequences for their actions.

“I think there are sufficient safeguards, which there should be because this is the ultimate penalty for somebody who has done something so heinous that they have forfeited their right (to live) based on taking other people’s lives,” says Stivers.

House Bill 50 and its companion measure Senate Bill 50 would require partisan affiliations for candidates for all city and county offices as well as school boards. Stivers and Meade say the bill is meant to make it easier for voters to know where those candidates stand on issues.

“They want to make sure that those folks who are being elected are of their same ideas and their same beliefs – they want to know where they stand,” says Meade. “So I understand that side of it. I also understand that partisan politics are invading every piece of society right now and we want to try to keep partisan politics out of as much as possible, so I also see that side of it.”

Democrats Graham and Neal contend the Republican-sponsored bills are unwarranted and unnecessary.

“I think it’s a clear overreach from the state level,” says Neal. “We should not be involved in local elections – that should be resolved at local level.”

Lawmakers may also consider banning the social media video platform TikTok on state government-issued cellphones and other devices. The four leaders say they haven’t reviewed Senate Bill 20, but add that they support the idea as a way to prevent the Chinese parent company that owns TikTok from accessing the devices and user information of Kentuckians.

The House has already approved $16.6 million in additional construction funding for a veterans nursing home in Bowling Green. The Senate is expected to approve that money when lawmakers return in February. In the remaining days of the 30-day session, the leaders say they also hope to take action on juvenile justice, education funding, and economic development issues. 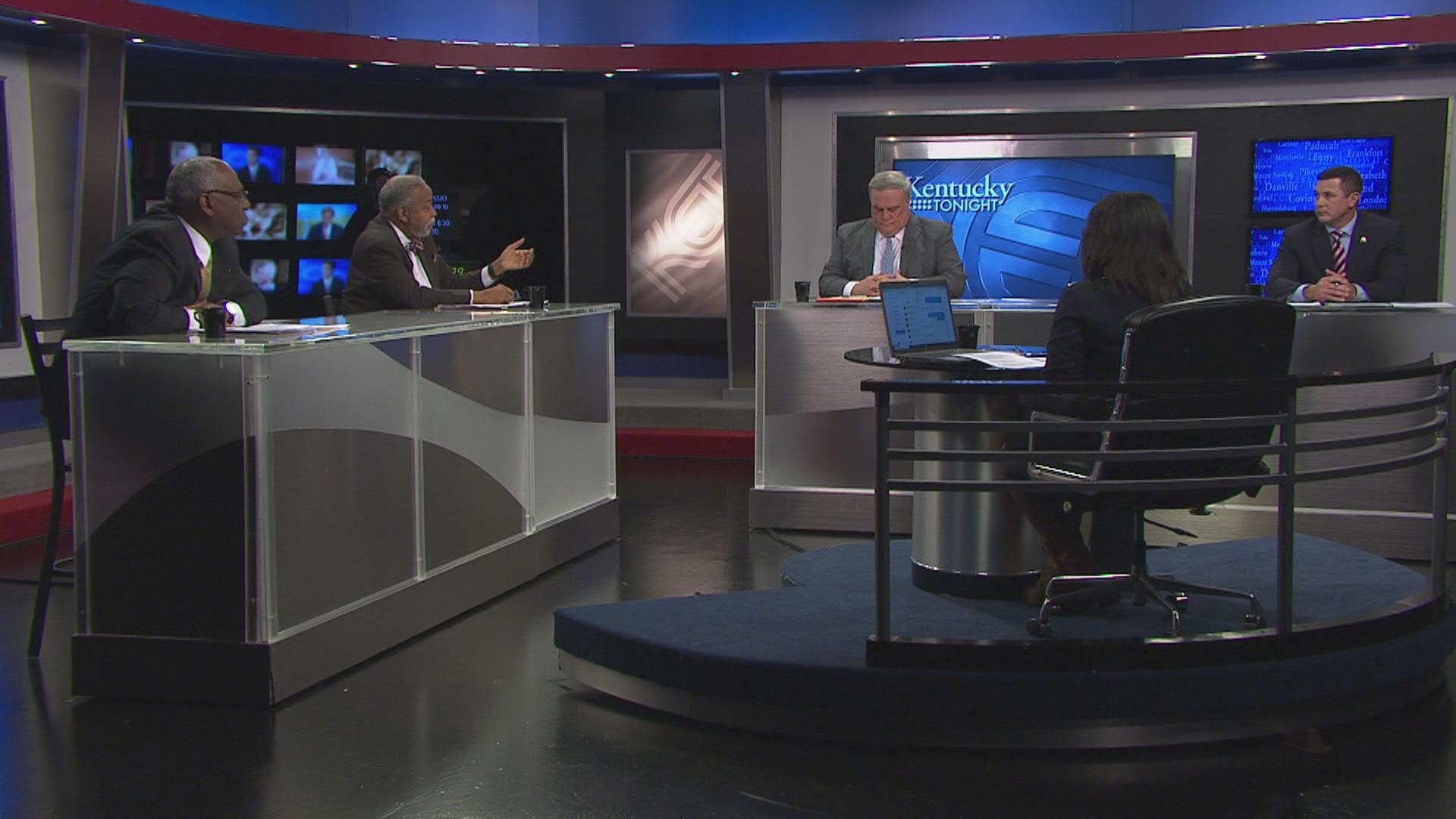