For decades, NCAA rules dictated that students recruited to play at American universities and colleges could only receive an athletic scholarship. At the same time, schools, athletic conferences, media networks, and even the NCAA itself have earned millions off the performance of these young players.

But recent court decisions have dramatically altered the playing field, making it possible for student-athletes to earn compensation and maintain their eligibility to play collegiate sports. Now through legislation and executive orders in states across the country, players can earn money off of their name, image, and likeness (also known as NIL) through endorsements, sponsorships, autograph signings, and other activities.

In the absence of national regulations from the NCAA or Congress on NIL, businesses large and small have rushed to sign deals with players across a range of collegiate sports, creating what some call a “wild west” of unfettered money, opportunities, and potential problems.

“The hope has always been there will be federal legislation to give us some kind of equal playing ground for all 50 states,” says University of Kentucky Athletics Director Mitch Barnhart. “In absence of that, you have confusion and a little chaos.”

Last June, Gov. Andy Beshear stepped in to protect student-athletes in Kentucky as well as the state’s universities and colleges. He issued an executive order that allows athletes to sign endorsement or sponsorship deals and to use agents to assist with their NIL contracts. The order also said schools must provide their student-athletes financial literacy training and could enact reasonable limits on how much time players can devote to NIL activities and on what products and services they can endorse.

• allow student-athletes to monetize their name, image, and likeness, and use an agent to secure NIL agreements
• require players to report their NIL deals to their schools
• void a student’s NIL contracts upon his or her graduation or by turning professional
• prohibit NIL deals that would involve sports betting, controlled substances, adult entertainment, or products that would be illegal for the student to use or possess
• require schools to provide financial literacy, money management, personal branding, and life-skills training to their student-athletes
• allow schools to place additional limited restrictions on the deals students can pursue
• protect school or team logos, colors, and other intellectual property
• require schools to create an appeals process if the institution rejects a player’s NIL agreement
• and provide liability protections for the schools, coaches, and athletic staffs.

“I think it’s a robust bill that creates the opportunity while protecting the interests of both the student-athletes and the institutions,” says Sen. Whitney Westerfield (R-Crofton), a cosponsor of SB 6.

Barnhart, who testified on behalf of the bill before a Senate committee last week, praised the bill for providing guidelines that he says will eliminate confusion for players, schools, boosters, and businesses. He also says the legislation is flexible so as to allow tweaks going forward.

University of Louisville Associate Athletics Director Matt Banker says SB 6 is a logical follow-up to Gov. Beshear’s executive order. He says the legislation protects the eligibility and the interests of student-athletes without over-regulating any of the parties.

“It’s really telling the world that the commonwealth, regardless of what institution you’re going to, you can maximize your NIL opportunities here, and we’re going to back you, and we’ve set expectations for our institutions to help you do that,” says Banker.

The Senate passed SB 6 on Feb. 10 on a vote of 37 to 0. It now awaits action by the House of Representatives.

Since Beshear’s executive order took effect last July, Banker says at least 200 student-athletes at U of L have signed NIL contracts, and some players have multiple deals.

At UK, about 250 players have scored about 800 NIL deals, according to Barnhart. He says the contracts include members of the football team, men’s and women’s basketball players, and athletes participating in non-revenue-generating sports like track and field hurdler Masai Russell.

“She’s got a half-million Instagram followers and she’s an influencer, but she wakes up every day working at it,” says Barnhart. “She is the most prolific in the NIL space on our campus in terms of female student-athletes.”

Female athletes at U of L have also secured significant deals, according to Banker, especially players on the school’s highly successful women’s basketball and volleyball teams.

“The spectrum of opportunities that are out there for female student-athletes in the NIL space is really extensive,” says Banker.

Although the major university stars get much of the attention, Westerfield says he thinks there will be many opportunities for athletes at the state’s regional universities and small colleges to get endorsement deals as well. He says such agreements can strengthen the bonds among student-athletes, schools, and their local communities.

“I think it helps rise all the ships,” says Westerfield.

But there are risks to students in their teens and early 20s coming into money so quickly. That’s why the legislation requires schools to train their student-athletes on personal finances and contracts. Barnhart and Banker say their schools already provided guidance on those subjects to their athletes. The trick now, they say, is helping their players stay within the rules of whatever NIL legislation gets passed.

“This is, at the end of the day, part of their education,” says Banker. “Their experience here is learning these business skills, legal principals, how to negotiate, how to manage their brand.”

“The goal is to not slap people on the knuckles every time you turn around,” says Barnhart. “The goal to help people get it right.”

Veteran Lexington sportscaster Dick Gabriel says the experiences of Antoine Walker offer a cautionary tale to young players. The former UK basketball star turned pro when he was 19 and earned $108 million over his 13-year career. But two years after retiring, he was bankrupt, thanks to reckless spending and ill-timed real estate investments. Now Walker talks to young athletes about money management issues.

“If you are good enough to earn whatever from NIL and get a shot at the professional leagues whether it’s in America or overseas, learn how to not blow your money,” says Gabriel. “The information and knowledge are right here in front of you.”

While NIL earnings won’t impact a student’s athletic scholarship, they could reduce other needs-based financial aid a player might receive, Lucrative deals could also create interesting dynamics among teammates and with coaches. But school officials say NIL activities can’t conflict with a student’s athletic obligations.

“If you want to compete in our space, you’re not missing practice,” says Barnhart.

While the schools have the right to review NIL deals, coaches and athletics staff can’t participate in the contract negotiations. Barnhart says those talks must be between the players, their families, and their agents. He says that separation creates an important boundary for coaches and their players.

“Then the coach feels like he can make sure that trusted relationship is preserved for many, many years to come,” says Barnhart. “At the same time, that young person knows he’s got a place of safe harbor.”

There’s still hope that the NCAA or Congress will create a national standard for NIL deals. But there’s been no movement on the issue in Washington, and Barnhart says it’s difficult to get the 1,000-plus member schools of the NCAA to agree on major rule changes.

Until then, Westerfield says he thinks SB 6 is a model bill not only for Kentucky but for other states as well. He cautions, though, that the “wild west” aspects of NIL will have to be carefully monitored.

The NCAA does have existing policies against recruiting inducements and pay-for-play situations. But Banker says Kentucky’s students, colleges, and universities will be better off if SB 6 becomes law.

“Without it you’re inviting more chaos,” says Banker. “With it, you’re providing a road map for our schools to do this in a thoughtful and strategic way, and to really further protect the student-athletes.” 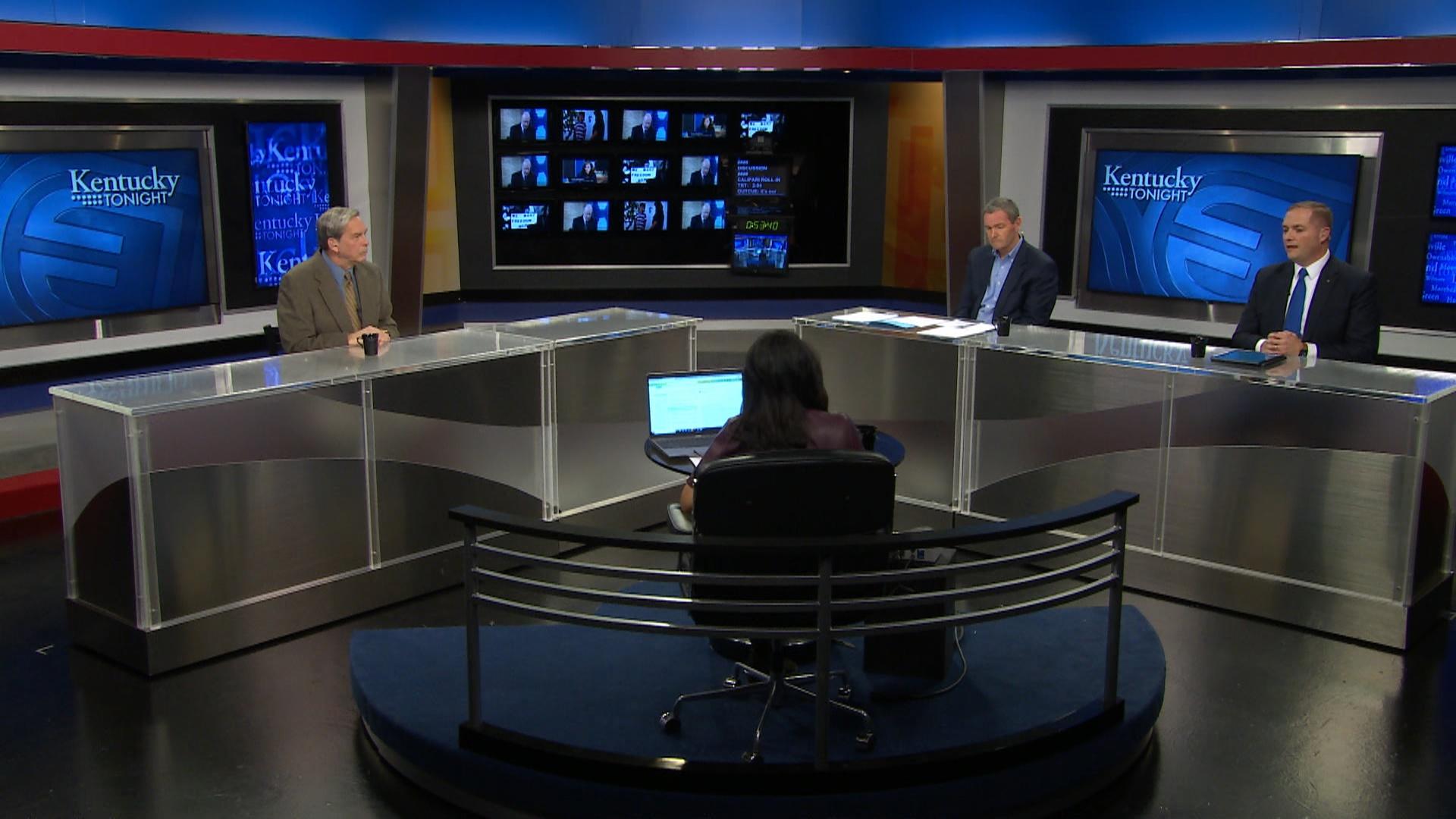