The 2022 Kentucky General Assembly is just weeks away, and legislators are busily preparing their priorities for the 60-day session. In addition to crafting a biennial budget, lawmakers are also expected to tackle allocation of COVID relief funds, additional tax code changes, updates to the state’s unemployment system, medical marijuana, and legislative redistricting.

“It would have been much more responsible to be called in to a special session to do it,” Sen. Jason Howell (R-Murray) says of the redistricting process. “Since it doesn’t look like that’s going to happen, the sooner we can deal with it and get it to the governor’s desk, the better it will be for everyone.”

Now in control of the Senate and the House of Representatives, Republicans have their first shot at redrawing all the state and federal legislative districts. Republican leaders wanted Gov. Andy Beshear to call lawmakers into special session before January so they could approve the new districts. Beshear said he wanted a completed plan that he could review before calling the session.

Senate President Robert Stivers (R-Manchester) and House Speaker David Osborne (R-Prospect) nixed that idea, saying a governor has no role in redistricting. Now lawmakers plan to address redistricting in the opening days of the session, which starts on Jan. 4. Beshear could still veto whatever plan gets passed by the General Assembly, but the Republican supermajorities in both chambers could easily override it.

Meanwhile Democratic lawmakers are eager to review the new maps.

“I just can’t wait to see what they cook up,” says Rep. Josie Raymond, (D-Louisville). “What I think we need to do is make sure we’ve got a fair and transparent process that’s not rushed.”

The challenge for Republicans is how to redraw maps to account for population growth in urban areas and depopulation in rural eastern and western Kentucky while not pitting too many incumbents against one another.

What to Do with COVID Relief Funds

In addition to crafting a new two-year budget for the commonwealth, lawmakers will also have millions of dollars in federal pandemic assistance to allocate. Kentucky Center for Economic Policy Executive Director Jason Bailey says the state still has about $1.1 billion from the American Rescue Plan Act available to spend.

“The surplus is really a once in a generation, maybe once in a lifetime opportunity to begin to reinvest in the core services that we have, frankly, depleted as a state through 20 rounds of budget cuts since 2008,” he says.

Bailey’s priorities for that money include education, child care, government employee raises, and food and housing assistance for struggling families. He contends making those kinds of investments will help Kentuckians and put the state’s overall economy on a stronger trajectory.

Raymond says House Democrats share those priorities. She says her goal is to help those Kentuckians who have been hurt most by COVID disruptions.

“What can we to do strengthen and stabilize families in Kentucky so we all come out of this stronger, not just [those at] the top,” says Raymond.

“We think the time is right, the time is now to just focus on bold policies for Kentucky,” says Shanks. “It’s a great opportunity to make investments in new programs.”

Republicans are likely to take a more conservative approach, however. Howell says just because state coffers are full now thanks largely to federal largesse doesn’t mean that will continue into the future.

“A lot of what we’re taking about is investing one-time money into something that’s going to have a recurring cost to it,” says Howell. “We don’t know what the economy is going to look like in the future and we’ve got to be sure that we don’t overrun our fundraising capabilities.”

Howell says he could see applying some of the ARPA dollars to the state’s pension debts, which he says would free up other regular budget money to fund something like early childhood development. Bailey contends a better approach to the pension crisis is to hire more employees and give current workers raises so that more employee contributions will be going into the retirement systems.

In 2018, lawmakers simplified the state’s income and corporate tax brackets to a single 5 percent rate. Shanks says that helped make the commonwealth’s business climate more competitive. But with neighboring states continuing to drop their tax rates, she says it’s time for Kentucky to go even lower.

“If we sit where we are today at 5 percent, we’re going to start losing ground,” says Shanks. “We’re going to look less and less competitive relative to other states.”

For a state that needs more regular revenue, Bailey says a further tax cut is the wrong idea.

“If you cut the income tax 1 point, that costs about $1.2 billion – that is far more than we spend on our entire higher education system in Kentucky,” says Bailey. “So if you want to do that, you’ve got to look at ways to pay for it.”

That could mean higher sales taxes, or applying the tax to more items, including groceries. Bailey says the net result will be greater inequality as corporations and wealthy individuals see their taxes reduced and middle- and working-class families experience a greater tax burden.

Raymond says a lower income tax rate isn’t going to suddenly transform her hometown of Louisville into the next Nashville, nor will it drive significant relocations to Kentucky.

“I’m not going to move my family across state lines to save 1 percent on my income tax,” Raymond says, “but I might for pre-K and paid family leave and other investments that we could make.”

“We need to try to build on our pro-job creation policies,” says Howell. “It’s important that the income tax reforms wouldn’t be focused on raising the amount of taxes that people pay, but it’s growing the number of taxpayers in our system by improving our overall business environment.”

Beyond addressing the financial needs of the Unemployment Insurance Trust Fund, lawmakers will likely debate ways to overhaul the unemployment system. Massive numbers of unemployment claims during the early months of the COVID pandemic overwhelmed the state unemployment office, which was already saddled with outdated technology, limited staffing, and arcane eligibility rules.

“People stay on unemployment longer in Kentucky than states that have more robust work-search requirements,” says Shanks. “So this isn’t about penalizing people, it’s about helping people find work.”

“A lot of what we’re doing with the unemployment benefits is not just stopping benefits, but enabling them to move from benefits to being back out as a dynamic part of the workforce,” says Howell.

Bailey says families and businesses stayed afloat during the pandemic because people received and spent unemployment payments. He argues that ending benefits sooner will only force people to take lower-wage jobs that aren’t a good match for their skills, which he says will end up hurting families and the economy.

“If anything, we should be looking back at the lessons of this [pandemic] and figuring out how we strengthen the program,” says Bailey.

Raymond says it’s unfair to demonize people who need unemployment since benefits amount to less than half of what they were making at their last job.

“We also demonize unemployment, which is not a giveaway. It is a social insurance system,” says Raymond. “These are people who are in a situation where they need some help and they deserve it.”

Another Push for Medical Marijuana

Look for another vigorous discussion about medical marijuana this session. Raymond says the House supports the idea, but Senate Republicans remain the roadblock. She says she’s baffled that a state that embraces bourbon and tobacco can’t get on board with marijuana prescribed for specific medical conditions.

Howell agrees that state senators have proven more reluctant to support previous bills. But he says Rep. Jason Nemes (R-Louisville) and Sen. Whitney Westerfield (R-Crofton) have collaborated during the interim on a proposal that could garner the necessary votes in the Senate.

Shanks says the Chamber worked with Nemes on earlier versions of medical marijuana legislation to include language to help employers. Otherwise, she says the Chamber will be neutral on any new proposals. With three dozen states already allowing some form of medicinal use, Bailey says it’s past time for Kentucky to permit it. 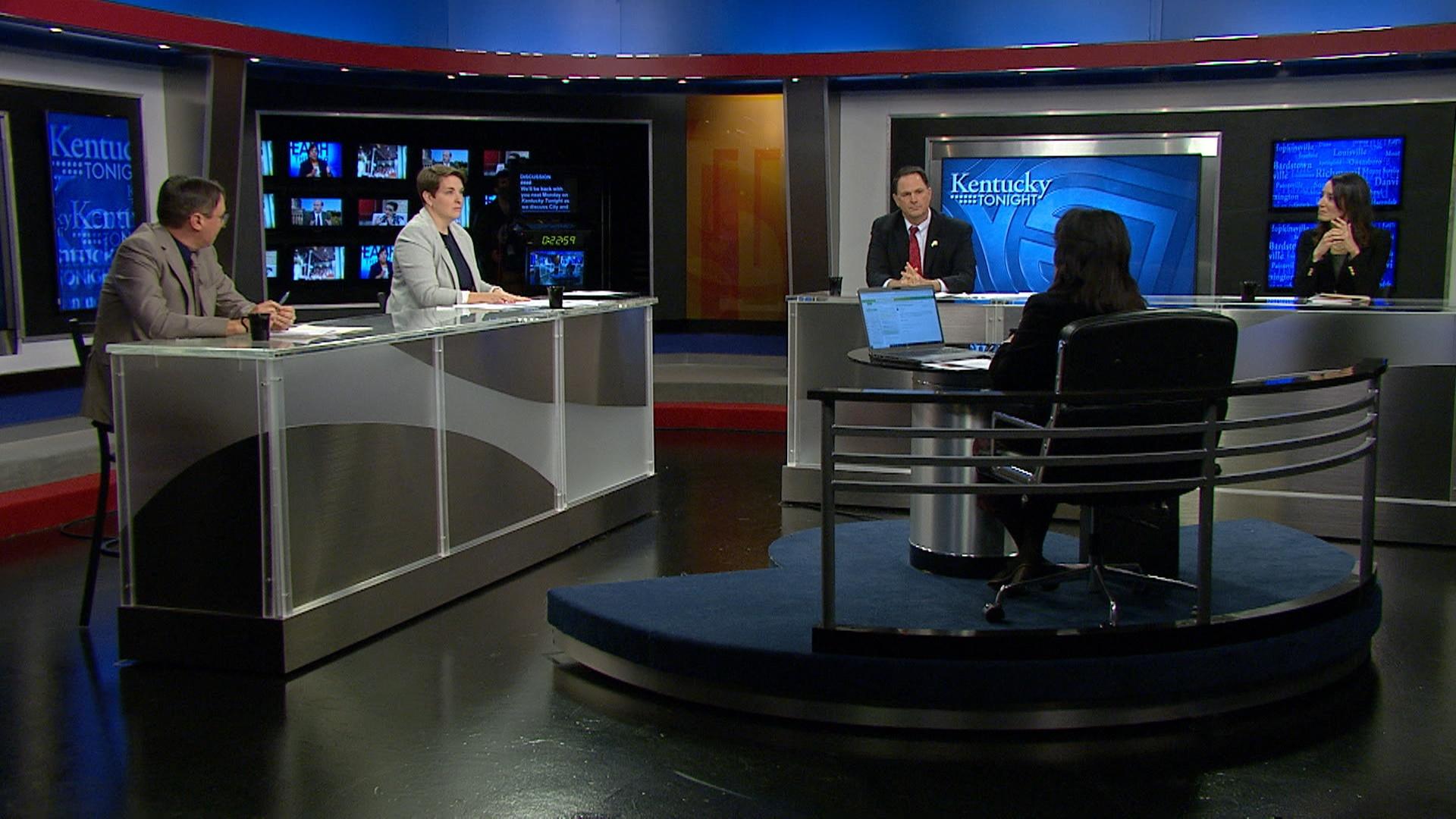