Major Events Change the Course of the Presidential Campaign

Could the 2020 presidential election get any more unusual?

First, COVID-19 upended the primary season, forcing candidates to find new ways to connect with Americans sheltered at home, and pushing election officials to give voters new options to safely cast their ballots.

Then two September surprises rocked the campaign: 1) the sudden death of U.S. Supreme Court Justice Ruth Bader Ginsburg, which has set up a bitter political fight over her successor; and 2) a bombshell report from The New York Times that reveals President Donald Trump paid no federal income tax in 10 of the last 15 years, and only paid $750 in 2016 and 2017.

“Here’s a man who says, ‘I want to make America great again,’ and yet he refuses to invest in America,” says state Sen. Reggie Thomas (D-Lexington).

While Trump paid little in federal taxes, he did pay thousands and even hundreds of thousands in taxes to the governments of Panama, the Philippines, and India. Thomas says this is just another example of how the president lies and disrespects Americans.

But Republican state Sen. Ralph Alvarado of Winchester says Trump simply took advantage of the breaks offered to him and other real estate investors in the federal tax codes. He contends Americans of all income levels benefit from rules that enable them to reduce their tax liabilities.

“If people don’t like that then I think it’s an opportunity for us to change the code,” says Alvarado. “You take a look at things like flatter taxes... or even to a consumption-based taxation, which would eliminate a lot of those discrepancies that are there.”

The Times report also details that Trump has more than $400 million in loans and debts coming due in the next four years, and that he could face a $100 million penalty from the Internal Revenue Service, a federal agency the president oversees.

“He’s using our government and our nation as his own, private piggy bank,” says Gretchen Hunt, executive director of Emerge Kentucky, which recruits and trains Democratic women to run for office. “Apparently the rules do not apply to President Trump, and I think that America has had enough of that.”

That includes a number of high-profile Republicans. Hunt points to former Governors John Kasich of Ohio and Tom Ridge of Pennsylvania, as well as Cindy McCain, the widow of the late Arizona Sen. John McCain, who have all endorsed Democratic challenger and former Vice President Joe Biden.

Republican strategist Kelsey Cooper says there will always be outliers who will endorse candidates across party lines. She says the Republicans she talks with stand firmly with the president. Cooper says she welcomes Democratic attempts to make Trump’s tax returns a campaign issue.

“When you are talking about anything other than the money in [voters’] pockets, and what their future looks like, and maybe if they’re children are going to get back to school, then you’re losing the election,” says Cooper.

President Trump and Senate Majority Leader Mitch McConnell have drawn praise from most Republicans for moving quickly to fill the Supreme Court seat left vacant by the recent death of Justice Ruth Bader Ginsberg. But Democrats say McConnell is hypocritical for confirming a new judge in this presidential election year when he declined to do so in 2016. Back then, President Barack Obama faced a court vacancy left by the death of Justice Antonin Scalia.

Different parties controlled the White House and the Senate in 2016, he says. Now Republicans control both. Another difference, says Cooper, is that Obama was a lame duck president, while Trump is not.

“Voters absolutely elected Donald Trump to be president in 2016, and they elected a Senate majority in 2018,” says Cooper. “That is the clearest mandate here that they would like for the Constitution to be followed, which says that the president shall nominate, and advice and consent of the Senate, which Leader McConnell has said he’s going forward to do.”

Hunt describes McConnell’s push for a swift confirmation of U.S. Appeals Court Judge Amy Coney Barrett as “Machiavellian.” Like McConnell said in 2016, Hunt says that voters need to be heard in this presidential election before a nominee is considered.

“The majority of Americans want to wait for the next president to be able to choose his Supreme Court nominee,” says Hunt. “This is an attack on the sanctity of our Supreme Court in terms of rushing it through in this highly politicized way.”

At the same time, though, Hunt cautions Democrats from trying to expand or pack the Supreme Court, should they win the White House and the Senate this fall.

Thomas says Republicans should play by the rules they set in 2016, when he says they never mentioned the fact that different parties held the Senate and White House. He argues that a court confirmation should be delayed until voters decide the presidential election because of the high stakes involved. A court case brought by the Trump Administration seeks to end the Affordable Care Act signed by former President Obama in 2010.

“We’re putting millions of people’s lives at risk with this Supreme Court action by Mitch McConnell and President Trump of going back to where we were pre-Obama,” says Thomas. “If you aren’t wealthy, you don’t have a job, you’re out of luck with health care.”

While Hunt praises the nomination of a female jurist to the court, she’s also concerned how Barrett might rule on issues affecting women from abortion, to workplace discrimination, to sexual harassment.

“Is this going to be someone who tries to open doors for women or close them on her way up to power?” says Hunt. “To really look at gender equity and gender equality, you have to not just look at who’s in seats of power, but what systemic reforms they are making to make the way better for women to realize their full potential.”

Cooper says confirmation of Barrett to the Supreme Court would open a huge door for all females but especially working mothers, Midwestern conservatives, and pro-life, Catholic women. But she adds that none of those characteristics would influence her actions as a justice.

President Trump’s Response to the Pandemic

As pandemic case numbers and the death toll continue to mount, the president’s handling of the coronavirus will be another key point of debate between the two candidates. Cooper and Alvarado praise Trump’s handling of the crisis. Cooper says he’s done everything to the best of his ability given the information he’s had available to him at the time. Alvarado, who is a physician, adds that the president quickly moved to shut down travel from China, mobilize the manufacture of ventilators, and distribute personal protective equipment (PPE) to states. He also rejects criticism leveled by some that the president should have a national strategy for fighting the virus.

Beyond the public health concerns, Thomas says voters should also consider the economic impact of Trump’s actions during the pandemic. He says the president’s response resulted in 30 million Americans losing their jobs between March and July.

But the economy has rebounded in recent months, says Cooper, including the addition of 10 million jobs.

“That’s still a net 20 million [jobs] lost this year,” says Thomas. “How should we applaud a president who loses 20 million jobs in one year?”

“I don’t think it’s right to put the blame on the president,” says Cooper. “We need to go look at our Democrat governors who have kept our states closed down. That’s where so many of our jobs have been lost.”

But Hunt says the GOP shouldn’t blame Democrats for economic problems when it’s the Trump Administration and Senate Republicans who have failed to act on a new pandemic relief package to help struggling families and businesses as well as financially strapped state and city governments.

“Those cries about getting the economy getting back on track really ring empty when our own leadership is not providing the support that this state desperately needs,” says Hunt. “What we’re more interested in is looking at leaders who move this state forward.”

Hunt says the election will be referendum on Trump’s mishandling of the virus, including downplaying the danger of COVID-19 to the public while speaking more honestly about it to journalist Bob Woodward. But Alvarado says the president was following the advice he received from White House Coronavirus Task Force member Dr. Anthony Fauci, who is director of the National Institute of Allergy and Infectious Diseases. 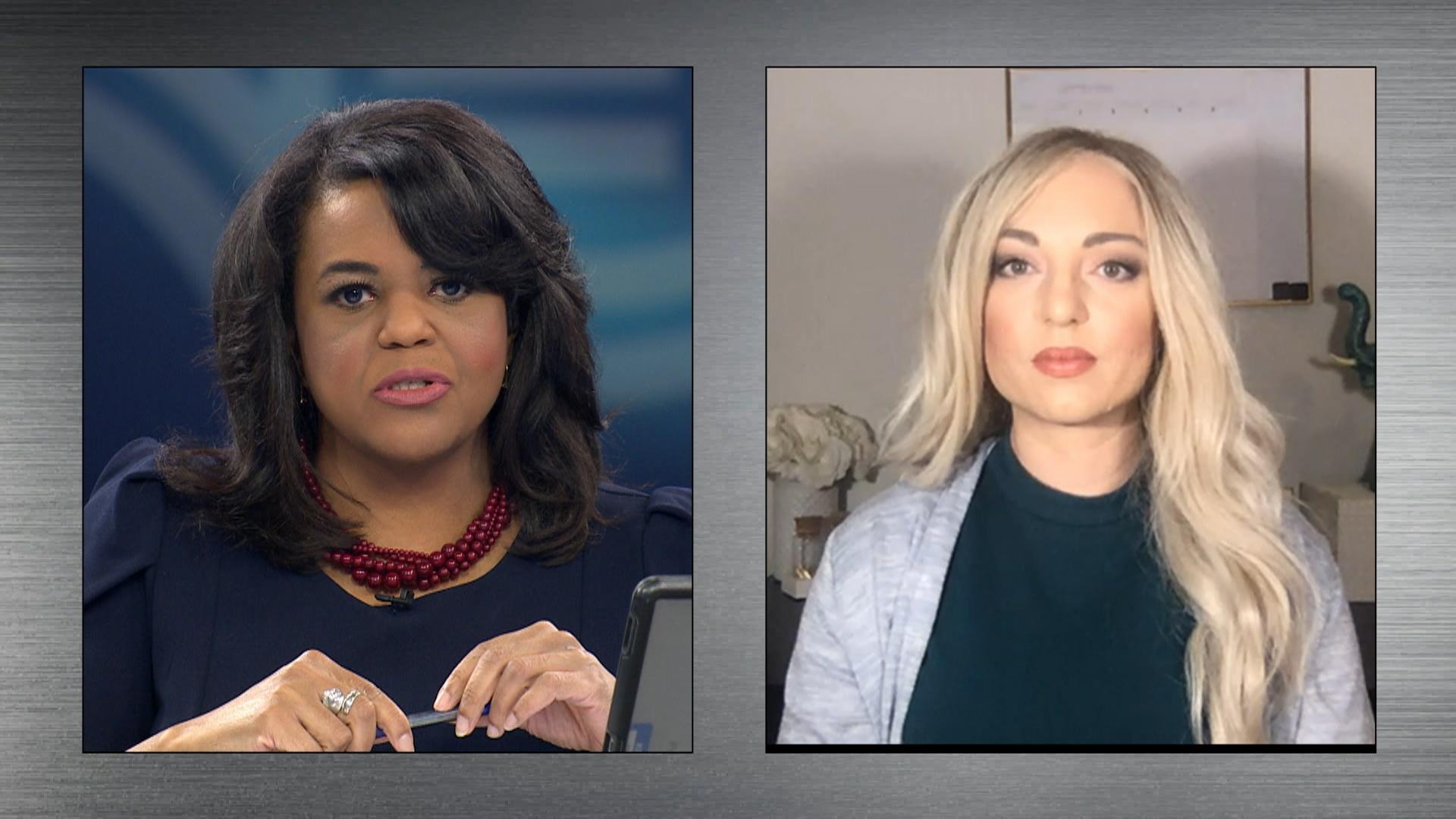