Legislative leaders started the 2022 General Assembly session with a mission to pass redistricting maps in the first week.

With that goal met, lawmakers have turned their attentions to a range of other issues, including the state budget, tax policy, infrastructure, and more. In the process, House Republican leaders broke with longstanding tradition and released their proposed biennial budget before Gov. Andy Beshear presented his spending plan to lawmakers. Normally, governors deliver their proposal first, which House budget committee members use to craft their budget bill.

“It guess it is a little bit unprecedented,” says House Speaker David Osborne, “but at the same I’m not sure why it’s unprecedented.”

The Prospect Republican says lawmakers spend the interim period hearing from executive branch officials, economic experts, and other stakeholders about their budget needs, so the Appropriations and Revenue Committee already has a wealth of information to craft a spending plan.

House leaders outlined their budget last Friday, ahead of Beshear’s budget address scheduled for Jan. 13. In previewing his own budget proposal on Tuesday, the governor called the House move unprecedented, unprovoked and unwise.

“It doesn’t bother me personally but it leads to an inferior product, which provides inferior services to our people,” Beshear said.

The governor also said the move might violate Kentucky statute but stopped short of calling for legal action on the matter. Osborne says it’s “laughable” to think getting a head start on the budgeting process is either illegal or unwise.

“I think it’s ridiculous to assert it would somehow result in an inferior product,” the House speaker says. “We will fully consider every item that the gov has offered up.”

Osborne says he is pursing an aggressive schedule to save time later in the session to tackle new tax reform measures. Republican leaders pushed through a comprehensive tax overhaul in 2018, and Osborne says lawmakers now have a once-in-a lifetime opportunity to do more.

With a $1 billion surplus plus billions more on the way in federal infrastructure and COVID relief funding, Democrats contend the state also has a unique opportunity to make much-needed investments.

“For the first time in many years we have money to argue about how we spend it instead of about where the cuts are going to be,” says House Minority Floor Leader Joni Jenkins of Shively. “As we go forward, I hope there’s room for compromise, that there’s room for transparency, and that the voices of the executive branch, as well as those of the minority and the majority are heard.”

The House GOP plan increases per-pupil funding for public schools (known as SEEK) to $4,100 in the first year of the biennium and to $4,200 in the second. It also continues to fund full-day kindergarten through the biennium, and increases the money schools receive to cover transportation costs.

The plan does not provide a pay raise for teachers, but does give a 6 percent increase to state employees. Osborne says the GOP budget also calls on the state personnel cabinet to review government employee salaries with an eye towards adjusting pay rates based on working conditions for various jobs and cost of living variances in different parts of the state.

“I think that we need to be thoughtful in how we pay our state employees as well as compensating them better,” says Osborne.

Jenkins says the thinning ranks of state employees has reached a crisis point, particularly among social workers and corrections personnel. She says those people can often find jobs in the private sector that have safer, less stressful work environments and that offer better compensation.

“Part of that is pay and part of it is the benefits package,” says Jenkins. “Folks no longer know that if I stay at this job for 15 to 20 years, I’m going to have a decent retirement.”

Senate President Robert Stivers says he thinks lawmakers will be able to reach an agreement on the compensation issue.

For example, the Republican plan does offer larger pay increases for social workers and state police officers, according to Osborne.

“State employees haven’t had a meaningful raise in 13 years, all the while we’ve been whittling away their retirement benefits,” says McGarvey. “If we want to run government like a business, then we’ve got to pay our workers.”

The governor’s proposal allocates $2 billion in additional funding in the next biennium to education, including ongoing support for full-day kindergarten and money for universal pre-kindergarten.

“No longer will tens of thousands of our children be left out of preschool or Head Start – programs that we know provide positive outcomes on children’s early literacy, and mathematic skills. and foster long-term educational success,” says Beshear.

Stivers disputes those benefits, saying that he’s seen studies that show pre-K and all-day kindergarten don’t influence future academic success. He says he doesn’t want to institutionalize children in a school-type setting from age 3 to 18.

“I’m not a fan of pre-K. I think kids need to be kids,” says Stivers. “I haven’t seen any data… that convinces me that pre-K is of substance.”

As the father of a youngster in pre-kindergarten, McGarvey says these early educational experiences are critical to a child’s brain development.

“This is not sending kids to institutionalize them, this is making sure that kids have social abilities skills, and fine motor skills… and are kindergarten-ready so that they can achieve that lifelong learning,” says McGarvey.

Republicans and the governor do agree on the need to provide financial assistance to communities devastated by the December tornadoes. Osborne says they will appropriate $200 million for disaster relief at the suggestion of the Beshear Administration. But only $45 million of that will be available for immediate spending on items like temporary housing and repairs to schools and infrastructure.

Osborne and Stivers say the remainder will be allocated once state and local officials have a better understanding of what else the affected areas need, and how much the Federal Emergency Management Agency will provide and private insurers will reimburse to policyholders. Osborne acknowledges, though, that even the full $200 million may not be enough.

“Nobody knows what it’s going to cost to get those communities back on their feet,” says the House Speaker.

Whatever the final amount is, Stivers says he wants tight controls on those funds to ensure that taxpayer dollars aren’t misspent or absconded by scammers who target disaster areas.

With so many families suffering damaged or lost homes, Jenkins wonders how many will chose to stay in the area. She fears some may move away from parts of the state that are already suffering population declines.

“What happens to those cities if people do not come back and rebuild?" says Jenkins.

Despite the influx of federal dollars, Frankfort Republicans are reluctant to spend those funds or the budget surplus.

“We have got to be very focused on not spending one-time money on something that creates recurring expenses,” says Osborne.

GOP leaders have expressed their desire to boost the state’s Rainy Day Fund and pay down public pension obligations rather than invest in much new spending. Stivers says using some of the surplus on pension debt now will save the state money on interest payments in the long run.

That’s bad news for state retirees who have not had a cost of living adjustment to their pension benefit in years. McGarvey says the state could give retirees a COLA increase and current employees a pay raise, which he argues would put more money into the economy and ultimately generate more tax revenues.

“We can do both,” says McGarvey. “We can protect our retirees and we can benefit our state workers.”

The Democrat says lawmakers should also consider new sources of revenue from sports betting and other expanded gambling options as well as medical and/or recreational marijuana.

Legislation to allow the use of medicinal marijuana has passed the House before, but then died in the Senate. Although studies indicate that prescribed use of marijuana can help people with certain conditions, Stivers says he still remains skeptical about the health benefits without more extensive research or guidance from federal health agencies.

As for pay raises for Kentuckians, Stivers prefers a different approach.

“You have more income if the government is not taking as much of it,” the Senate president says. “So we might want to consider some tax reforms that lets people keep moneys in their pocket.”

Over the weekend, lawmakers approved the new maps for state and federal legislative districts as well as state Supreme Court districts. While legal challenges could be forthcoming, Osborne says he believes the maps drawn by the Republican supermajorities to be lawful and constitutional.

Democrats complained about how some of the districts were drawn by the GOP. Jenkins says Lexington, Bowling Green, and northern Kentucky have been carved up in ways that will dilute the representation of those areas and hurt Democrats. She also says it’s interesting that the two sets of Democratic House districts in Jefferson County set to be changed will pit outspoken female incumbents against each other.

Given the tradition of gerrymandering political districts in the commonwealth, Jenkins contends the state needs a nonpartisan redistricting process.

“I will admit the former majority took some liberties with the map, and I think it’s time for us to have a complete reset of that,” says Jenkins. “I think having independent experts in map-making would be a great thing for the state of Kentucky.” 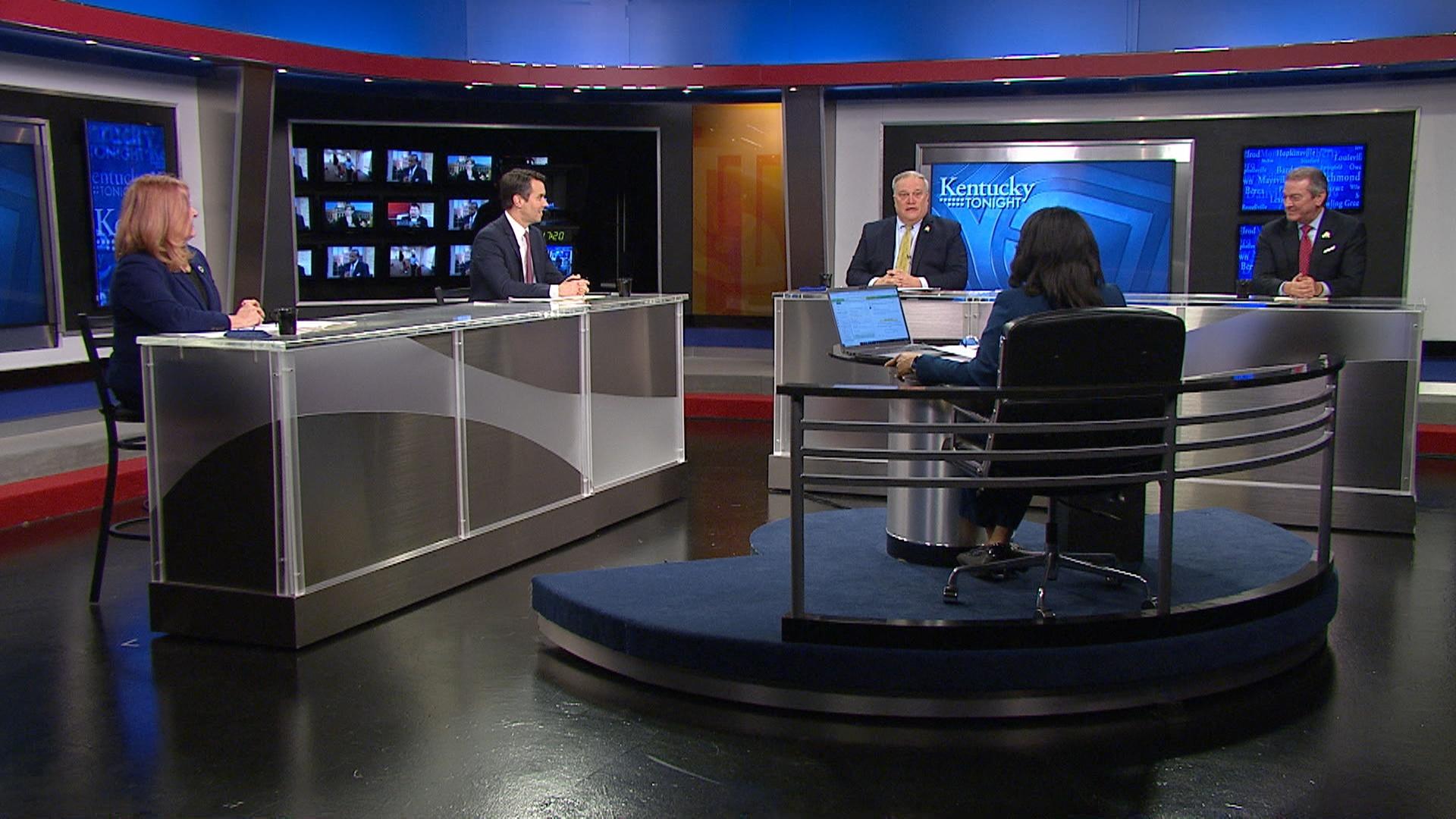