A Look at the Details of House Bill 137

Proponents of sports wagering in Kentucky must feel like they're living out the words of Major League Baseball catcher Yogi Berra, when he said, "it's deja vu all over again."

Last year a state House committee approved legislation to allow Kentuckians to legally bet on sporting events. Despite bipartisan support, that bill never made it to the House floor for a vote.

This year, a new sports wagering measure has already gained unanimous approval by the House Licensing, Occupations, and Administrative Regulations Committee, but the bill has languished for two weeks awaiting further action. That's caused some gaming advocates to fear the idea is doomed yet again.

Rep. Adam Koenig (R-Erlanger), chairman of that committee and sponsor of House Bill 137, says there's nothing to fear. He contends the measure already has enough votes to pass, and House leadership will call the bill "when it's ready."

“When everyone’s had the opportunity to discuss it with their constituents and we can maximize our votes so it improves its chances down in the Senate,” says Koenig.

What's in the Bill?

The legislation would allow Kentuckians over the age of 18 to bet on the outcomes of professional major league sporting events as well as collegiate games, including those played by state university teams. Bets would need to be placed in person at one of the state's horse racing tracks or at the Kentucky Motor Speedway. Registered bettors could also wager online through an app acquired from one those facilities and used while the bettor is within the borders of the state.

The venues that offer sports wagering would have to acquire a state license, which will initially cost $500,000 plus $50,000 for annual renewals. The Kentucky Horse Racing Commission would manage and regulate the wagering system.

In-person bets would be taxed at 10.25 percent, while online bets would see a 14.25 percent levy. The bulk of the revenues would be allocated to the state's ailing pension systems, while 5 percent would be reserved for gambling addiction prevention and treatment, and 0.5 percent for the Kentucky Thoroughbred Development Fund to boost race purses.

Koenig estimates sports wagering would generate at least $22.5 million annually for the commonwealth, not including licensing fees.

Legislation Allows Other 'Games of Skill'

In 2018, the U.S. Supreme Court struck down the Professional and Amateur Sports Protection Act, which essentially prohibited state-sanctioned betting on sporting events. Koenig says that since that ruling, 19 states have moved to legalize sports wagers, including Indiana, Ohio, and Tennessee.

Even where it's not been legalized, Rep. Al Gentry (D-Louisville) says the activity is occurring through bookmakers and off-shore entities.

“We're not introducing gambling or sports betting... to our state, it's already here – it’s in every single community,” says Gentry. “I’ve always looked at it as a common sense approach: We already have it here, let's regulate it.”

But HB 137 goes beyond simple bets on college and pro sports. The measure also allows wagering on fantasy sports teams and online poker as well as "other events in conformance with federal law." Martin Cothran of the Family Foundation of Kentucky says that opens the door to other games of skill traditionally associated with casinos.

“There’s no net with holes begin enough to let sports wagering through, and small enough to stop other forms of casino gambling,” says Cothran. “It’s the same argument for both: You get all of it or none of it.”

Koenig says he's not trying to sneak casino gaming into his bill. Instead, he says he wants to give track operators the flexibility they need to respond to future changes in wagering technology and consumer interest. The legislator says his goal is to regulate the activity and boost state revenues in the process.

“This is about keeping the discretional spending of our Kentucky citizens within our borders, because right now it’s leaving our borders,” adds Gentry, who is a co-sponsor of HB 137.

Cothran and other opponents of the plan contend that any expansion of gaming or wagering in Kentucky can only occur via a constitutional amendment approved by voters. Previous attempts by lawmakers to bring casinos to the commonwealth pursued an amendment path.

A proposed amendment would need to be approved by 60 percent of both chambers of the legislature, and then approved by voters, which sets a much higher bar for gaming advocates to achieve.

Koenig says the experts he's consulted believe that sports wagering can be enacted through legislation and does not require a constitutional amendment.

“Not only is it not necessary, it’s not even close to necessary,” says Koenig.

The Republican says the framers of the state's 1891 constitution only sought to prohibit lotteries and games of chance, which is why voters had to approve amendments to allow the Kentucky Lottery and charitable gaming. (A 1931 court ruling determined pari-mutuel wagering to be legal since those betting on horses play against other bettors and not the "house.")

Cothran says if Kentucky's constitution already allows games of skill, as Koenig argues, then the state should have allowed casino operations long ago. He says the reason that hasn't happened is because gaming advocates know such facilities would be challenged as unconstitutional.

The Perils of More Gambling

Then there’s the question of whether more gambling – beyond betting on racehorses and playing the Kentucky Lottery – would be good for the commonwealth?

“There is no safe gambling,” says gambling opponent and Lexington attorney Richard Dawahare. “The state’s main job is to promote general welfare. Everything about gambling opposes that.”

Dawahare says for every dollar the state would receive in revenues, it would spend another $3 to cover the social costs that gambling creates. He acknowledges that Kentuckians already gamble, but that doesn't mean the state should endorse the activity.

“The problem is that if we institutionalize sports gambling, that’s putting a Good Housekeeping seal on it,” says Dawahare. “We will create a lot more gamblers and a lot more problem gamblers with the expanded availability.”

Gentry admits that gambling addiction is a serious problem, but he says the state currently does nothing to help those people.

“We appropriate no dollars for that problem right now,” says the Democrat. “Our bill fixes that. We appropriate moneys for the first time to go toward addiction gambling problems.”

As for generating new revenues for the state, Dawahare says there are “healthier ways” to do that. For example, he says the state could recoup billions a year by repealing unfair tax incentives. He also argues that trying to compete with other states for gaming revenues is a "race to the bottom."

“Yes other states are doing it,” says Dawahare, “but we don't have to get every dollar that's out there, especially if it’s going to hurt us, and be contrary to our values, and end up costing us, according to the experts, more than we take in.”

Another concern with the sports betting proposal is that it would be regulated by an agency, the horse racing commission, that currently does not have to abide by executive branch ethics regulations.

“This is an accident waiting to happen,” says Cothran. “We’re putting gambling, something that has been subject to corruption time and time again, under an agency of government that is not under ethics restrictions. There’s a problem with that.”

While Koenig waits for HB 137 to be called up in the full House, he says he's working to secure as many votes as he can. He says he probably should've kept the bill in committee longer than he did, which would have given him more time to garner broader support for the measure. But he dismisses the notion that he and House Republican leaders are waiting to see how the bill would fare in the Senate before requiring House members to take a public vote on the bill.

“I don't think it will haunt anyone who’s willing to vote yes,” says Koenig. “This is a freedom bill and this is a allow-grown-adults-to-make-their-own-decisions bill.”

Gentry says he's eager to vote for HB 137 because he contends it's what many Kentuckians want.

“If we don't bring this bill to the floor and vote on it when we have majority support for the bill, then we are suppressing the voice of the commonwealth,” Gentry says.

Cothran says he has no doubt the legislation could pass the House, but he contends the prospects are less certain in the upper chamber.

“I don't detect a strong sentiment for this bill in the Senate,” says Cothran, “and I particularly don’t get it in the Republican caucus.”

With more than half of the 60-day session still to come, Koenig says there’s plenty of time for his bill to be passed. 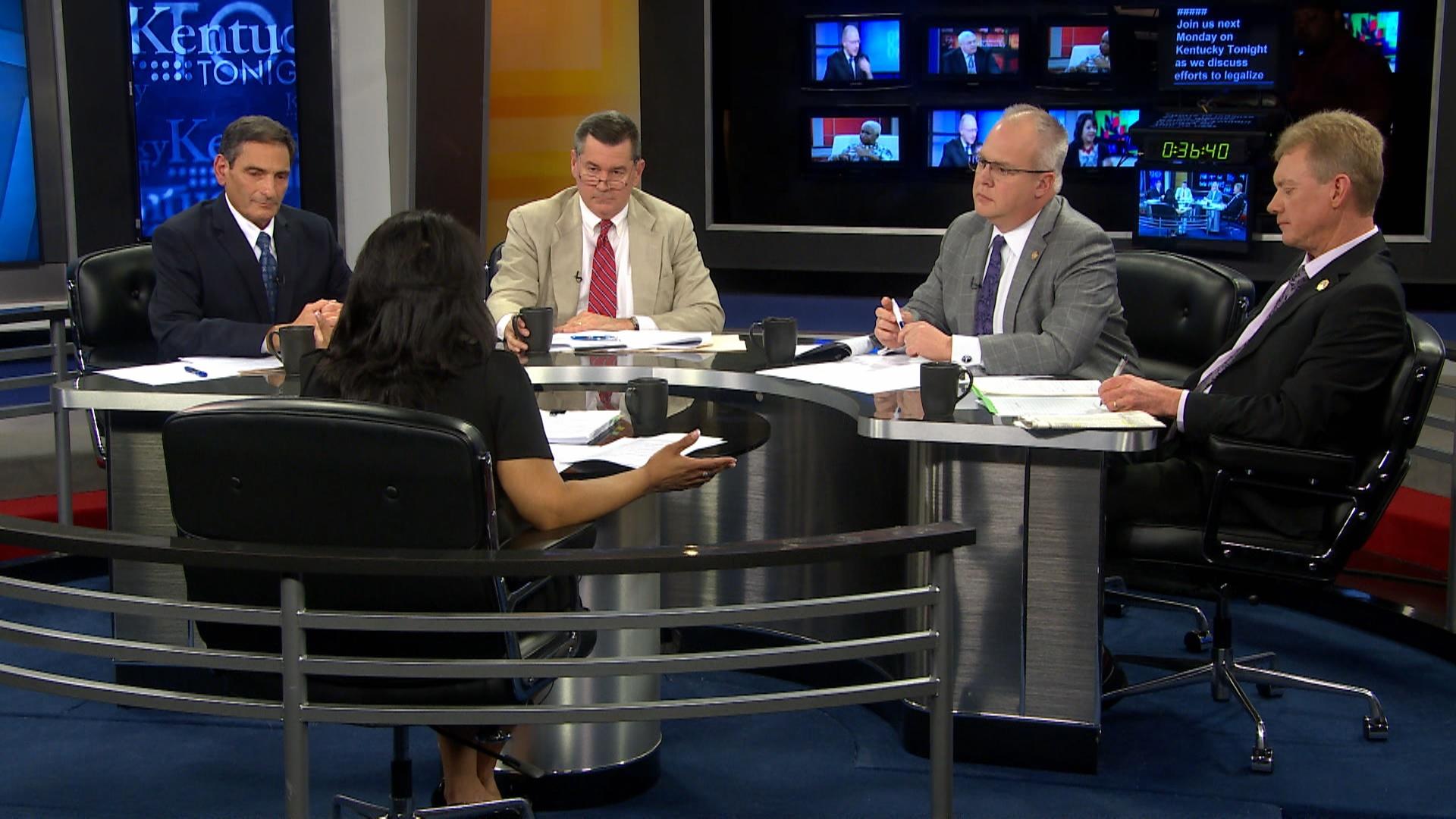