Gov. Andy Beshear and First Lady Britainy Beshear sit down for a wide-ranging conversation about the couple's first year in office.
Length 56:38 Premiere: 1/4/21

Then, barely three months in office, the COVID-19 pandemic hit and normal life in Kentucky and around the world came to a screeching halt. Instead of boosting the state’s economy and education, Beshear found himself ordering businesses and schools to shutter in an effort to stem the spread of the coronavirus and keep it from overwhelming hospitals with patients.

“My only choices have been unpopular and unpopular,” Beshear told KET’s Renee Shaw in an interview recorded on Dec. 28, 2020 to mark his first year in office.

“I’ve made decisions based on the science – the science of how to stop this virus,” the governor says. “It was the right thing to do and it saved lives and I’d do it again.”

The first known case of coronavirus in the state was confirmed on March 6. Beshear declared a state of emergency that day to muster the necessary resources to respond to the burgeoning pandemic.

The governor now says that was the worst day of his young administration, closely followed by the days he had to announce double-digit death counts, ranging from 10 to 53 Kentuckians lost to the virus. Especially hard was the day he reported the death of a friend and mentor, Lillian Press, the widow of KET’s founder, the late O. Leonard Press.

But amidst the crisis, Beshear says there have been good days, such as the day in mid-December when the first doses of the Pfizer vaccine were administered to health care workers at University of Louisville Hospital. He says 2021 will be the year Americans defeat COVID.

Along the way, though, the Democrat has had to fend off criticism from some Kentuckians and Republican state lawmakers angry over the forced closures, mask mandates, and limits on public gatherings and church services. Several court cases have challenged executive orders issued by Beshear during the on-going state of emergency. In November, the Kentucky Supreme Court upheld the governor’s authority to issue emergency restrictions on individuals and businesses to contain the virus.

Heading into the 2021 legislative session, Republican leaders in Frankfort are proposing legislation to limit a governor’s ability to enact emergency executive orders. They contend Beshear has abused his constitutional authority and has not involved the legislative branch in his decisions.

Beshear says his orders are similar to those made by Democratic and GOP governors across the country, and that those actions are backed up by public health guidance issued by the Republican Trump Administration. He says states of emergency require fast and nimble action, which he says would be impossible to do if he had to consult with 138 part-time state lawmakers. He says his Republican critics are simply playing politics and that limiting any governor’s emergency powers would be a shame and a tragedy.

“It’s going to harm our families at a time they need decisive action,” he says.

“To tear away the powers that every governor, not just me, are exercising across the country to keep people safe, it would basically be surrendering when victory is in sight and it will cost people their lives,” Beshear says. “The other thing it will do is damage our economy.”

Senate President Robert Stivers (R-Manchester) has also proposed an amendment to the state constitution that would allow legislators to call themselves into special session. Currently only governors have that power, but Stivers says such an amendment would enable the legislative branch to be involved in emergency decisions.

Beshear dismisses that idea, saying it would create a full-time General Assembly and give lawmakers the unchecked authority to pay themselves more for failing to complete their work during regular legislative sessions.

The governor has also faced criticism over the handling of unemployment benefits. Because of pandemic-related closures, the state’s unemployment insurance office was inundated with a record number of claims. That caseload, coupled with emergency changes to the program issued by Congress, overwhelmed the state workers charged with processing those claims.

As of late December, nearly 84,000 unemployment claims remain unresolved. Beshear says that’s unacceptable, but adds that arcane federal regulations along with state budget cuts that closed 11 regional unemployment offices and reduced staffing by 90 employees are to blame for the backlog.

“We haven’t been able to help people fast enough, but it’s not the fault of those that are working in the unemployment office,” he says. “They are working incredibly hard, really long hours, and they are doing their best.”

The governor is set to deliver his State of the Commonwealth/Budget Address virtually before a joint session of the General Assembly on Wednesday, January 6, at 7 pm. (The address will air on KET and stream on KET.org/live.) Beshear says one of his budget priorities for this legislative session is restore funding to the unemployment office to help ensure that similar backlogs never happen again.

Beyond that, the Democrat says his fiscal goals are to provide relief to Kentucky families and businesses hurt by the pandemic; invest in education, health care, public pensions, and job creation; and to position the commonwealth to be a leader in the post-COVID world.

“I believe that every family across Kentucky will find something in this budget that’s going to help move them ahead or help get them through this pandemic,” he says.

Beshear says state employees deserve a pay raise, and he wants to boost pay for K-12 teachers and school staff. He also hopes to bolster higher education funding, and remove what he calls “financial impediments” to students being able to attain a two- or four-year college degree or professional certification.

The governor says he opposes any legislation that would move future teacher hires from the state’s defined-benefit pension plan into a 401(k)-type plan. He contends the changes being proposed would amount to a dramatic pay cut for new educators. He says maintaining the teacher pension package as it is now is crucial to attracting the best talent to Kentucky classrooms in the future.

The Commonwealth will end the current fiscal year with a surplus, according to Beshear, thanks to higher-than-expected revenues, and pandemic relief funding from the federal government. He says a third CARES Act would enable state government to do even more to help Kentuckians and the state’s economy.

“The decisions that we make in this session on the next one-year budget are going to determine whether our recession is short or long,” the governor says. “We’re going to have the funds to do so, the question is will we have the will.”

On the revenue side, Beshear says he will again seek approval of sports wagering.

“I believe the time was right years and years and years ago when virtually every state around us, all Republican states, already have it,” he says. “The fact that we haven’t done it at this point is not only silly but puts us at a competitive disadvantage.”

The governor still supports full casino gaming, but he says he’s willing to take a small step with sports betting first. He adds that approval of historical racing games is also crucial if the state wants to continue to be the Thoroughbred horse capital of the world.

Beshear says is also past time for the state to legalize medical marijuana. But he says he wants to enact it in such a way as to be “revenue positive” so it offsets any administrative and regulatory costs incurred by the state. The governor says that doesn’t necessarily mean taxing medical marijuana patients, though. He says levies could be applied at the growing, processing, or distribution levels.

Other Issues Facing Beshear and the First Family

Another crisis the governor faced in 2020 involved the protests against the police shooting of Louisville EMT Breonna Taylor. In late May, Beshear ordered Kentucky National Guard troops to Louisville to help with crowd control. But while deployed there, two guardsmen were involved in a shooting that killed a Black restaurateur in West Louisville.

“Calling in the National Guard is never an easy thing,” says the governor. “We were at a potential tipping point… and wanted to ensure that we could keep everybody safe.”

Beshear says his administration is working to address racial disparities in the Commonwealth. The state has moved to enroll more Black and Hispanic Kentuckians in Medicaid to alleviate disproportionate health care impacts. Officials are also updating Kentucky State Police training materials to improve cultural awareness and de-escalation techniques and to remove racially inappropriate materials. He says much work remains to be done on racism, and he plans to collaborate with Black lawmakers on those efforts.

Despite calls for impeachment, threats on social media, and protests against his actions, which included armed militia members coming on to the front porch of the governor’s mansion, Beshear says he will not be deterred from doing “what’s right” for Kentuckians during the pandemic. He says he believes Kentuckians are actually more unified than they have been in decades. But he acknowledges that he and his wife, First Lady Britainy Beshear, have had to have “tough conversations” with their children, ages 10 and 11, about the various threats.

“They deserve to be sheltered from a lot of this,” he says. “They mean more to me than anything else on earth and we’ll do what’s required to protect them.”

“What we have really tried to instill in them is that love always wins over hate,” says Britainy Behsear. “When they hear or see something that is particularly negative about their dad, we remind them of all the good people who are out there.”

The First Lady says living in the governor’s mansion with a security detail was an adjustment for the family, as was the need to cloister at home because of the pandemic. She says the extra time with her children has been a gift, but she admits there have been tough times as well.

“There are days when I feel really low,” she says. “So what I try to do in those times is to take a breath and take a walk around the block, just do something to get moving.”

Brittany Beshear says COVID shelved plans she had for what she calls First Lady Field Days where she would travel around the state to encourage children to get outside and exercise. Instead she’s connected with kids through video chats to read stories and to create arts and crafts projects. But after the pandemic, she says she wants to focus on pediatric mental health.

She also wants to continue an initiative started by her mother-in-law, former First Lady Jane Beshear. The Shop and Share program collects canned goods, clothing, toiletries, baby products, and other items for domestic violence shelters around the state.

“Our vulnerable populations have just become even more vulnerable with the pandemic,” she says. “We can’t just ignore those challenges, and we need to do everything we can as a collective group in Kentucky to make sure that we keep those people top of mind and see what we can do to help them through this.” 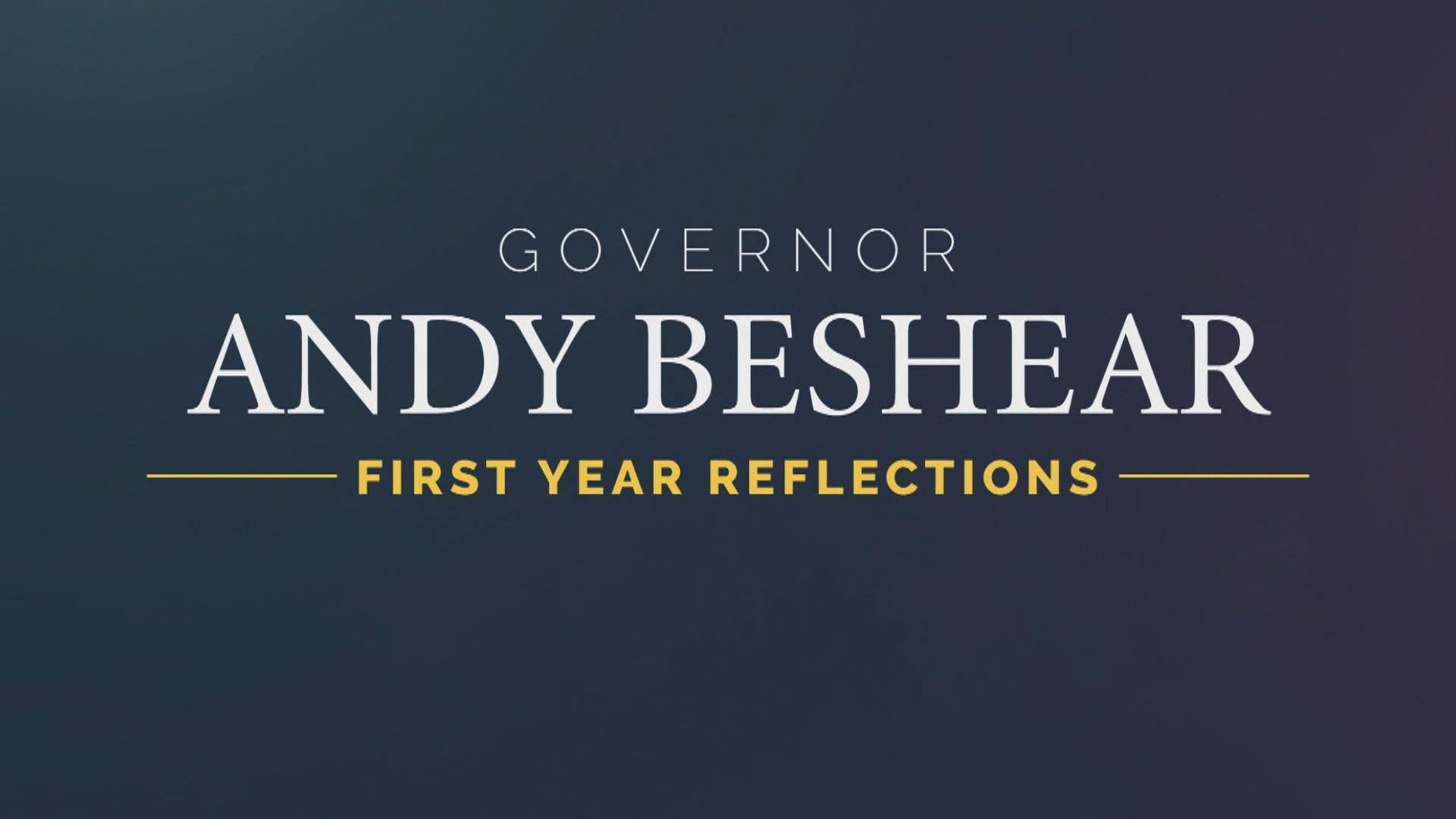