For 20 years, students enrolled in Western Kentucky University's VAMPY program, a summer camp for Verbally and Mathematically Precocious Youth, have designed and created murals about the Holocaust. Watch as students work on the 2017 mural and explore Never Again, an exhibition of past murals at Louisville's Jewish Community Center.
Length 26:10 Premiere: 2.25.18 Rating: TV-PG

For three weeks every summer, gifted young students from across the state and nation gather at Western Kentucky University for a summer program called VAMPY, or Verbally and Mathematically Precocious Youth. Middle and high schoolers immerse themselves in a range of studies and activities that, as one student says, allow them to “express your inner nerd.”

One class the children can choose to attend allows them to learn about the extermination of millions of European Jews and others in the Holocaust.

But they do more than learn about that atrocity of World War II. The children are challenged to create murals that can help educate other students about one of the darkest moments in modern history.

“Most of my family thought I was kind of crazy that I wanted to take a Holocaust class,” says Bailey Richardson of Grayson County Middle School in Leitchfield. “It gives me hope that we’re all coming together and wanting to learn about this topic so that it won’t happen again.”

The KET documentary Murals of the Holocaust follows Richardson and other students who created an art project for the “Nazi Germany and the Holocaust” class at the 2017 VAMPY program.

Connecting with the Horrors of the Holocaust
Ron Skillern has taught the Holocaust class at VAMPY for 20 years. But his very first group of seventh through ninth graders taught him a valuable lesson.

“This is a subject that you have to take great care in teaching,” he says.

Skillern jumped into the topic by showing films American soldiers recorded as they liberated concentration camps. The flickering images revealed thousands of dead bodies stacked in piles and emaciated detainees so near death they could barely move. The films were too much for one young student who fled the room in tears.

Skillern, a government teacher at Bowling Green High School and the 2016 Kentucky Teacher of the Year, decided to use art to help the children in the his class process what they learn about the Holocaust. He has his students create murals that depict some facet of Hitler’s “Final Solution.”

”Before I came here, I thought I knew more than I actually did,” says Georgia Napier of DuPont Manual High School in Louisville. “I knew that the Jewish community was affected, but didn’t know how many people and how horrible it actually was.”

In a series of lectures, presentations by guest speakers, class discussions, and videos, the students learn how the Nazis murdered millions of Jews as well as Catholics, gypsies, homosexuals, and individuals with disabilities.

“My family is Catholic, so this could’ve easily happened to us had we lived in a different time,” says Chloe Cox of Grayson County Middle School in Leitchfield.

Part of their studies included a trip to Washington, D.C., to visit the United States Holocaust Memorial Museum. The students saw a train car used to carry Jews to their deaths, a three-story display of pictures depicting the lives of 3,000 Jewish people who lived in a small town the Nazis destroyed, and collections of clothing, jewelry, and shoes taken from concentration camp inmates.

“You see pairs of shoes that belong to people from all walks of life: workmen shoes, dress shoes, children’s Sunday shoes,” says Ben Bozza from Greenbrier High School in Greenbrier, Tenn. “I feel like that really helped humanize the whole thing because each of those shoes is an individual story… a human being walked in those shoes.”

A Fighter or a Bystander
Back in Bowling Green, the 2017 Holocaust class heard from two men with direct connections to the Holocaust: Jeffrey Jamner, who is senior Director of education and community arts at the Kentucky Center for the Performing Arts, and retired newspaper journalist Fred Gross.

Jamner’s mother and grandmother were held at the Auschwitz death camp in Poland. On the day a guard came to escort them to the gas chamber, Jamner says his mother, who was nine years old at the time, began laughing hysterically. The guard asked the girl why she was laughing. She said it was because she knew what her fate was, but then she asked the guard if he knew what would happen to him.

“You’re never going to sleep again,” Jamner says his mother told the guard. “What could a child possibly have done to have deserved this? I’m going to haunt you, you will never sleep.”

Those words stunned the guard, who pulled Jamner’s mother and grandmother from the line and sent them back to their barrack. They stayed until they eventually escaped the camp.

Gross was three years old when his family fled their home in Belgium after the Germans invaded 1940. They along with other Jews sought refuge in the southern France, but soon learned they would not be safe there either.

“France was responsible for deporting 75,000 Jewish people,” Gross says. “Most of them were Jews who escaped into France thinking that they would be safe living in France. Very few returned.”

One night, a young Frenchman warned Gross’ father that the Germans planned a morning arrest of all Jews living in this particular French town. The Grosses were able to escape ahead of the round up and eventually found safety in Switzerland, where they stayed through the end of World War II.

In telling his family’s story, Gross encourages the students to put themselves in the shoes of that Frenchman who probably risked his own life to help save Jewish residents.

“You may face a situation where you have to make a decision to fight for justice and peace, or just to be a bystander,” Gross says. “That decision could very well determine the nature of your life forever.”

Ensuring a Different Kind of Future for the World
The students were so moved by Gross’ words that they included his quote in the artwork they produced as part of their studies. Their mural explored the liberation of the death camps, and used an image from the HBO miniseries “Band of Brothers,” that showed American infantrymen liberating a camp at the end of the war.

“All you can see is the backs of two of the soldiers as they’re coming into rescue everybody in the concentration camp,” says Chloe Cox. “Whenever you view it, the goal is to feel like you’re one of the soldiers coming and helping everybody.”

“I don’t often think of the American soldiers that risked their lives for those prisoners,” says Bailey Richardson. “It’s really powerful how there should still be hope and humanity for those that are willing to stand up and do the right thing.”

Last fall, Louisville’s Jewish Community Center featured an exhibition of 20 Holocaust murals created by VAMPY students over the last two decades. Jamner says the display is especially powerful for students to view because each mural was created by young people their own age.

“Students notice what’s going on in the world and they see examples all the time of man’s inhumanity to man,” Jeffrey Jamner says. “If we can help them understand what happened to an entire generation in Europe, and then they connect that to the world today and make decisions on what kind of world they want this to be in the future, then they are really invested in their learning. They are wanting to, in a sense, be the authors of their own futures.”

And for at least one of the students in the Holocaust class, that means taking on a new mission in life.

“Everybody needs to remember that history repeats itself, and if we don’t learn from the past, something like the Holocaust could happen again,” says Ben Bozza. “I feel as though I need to make it my goal to spread as much of what I learned here as possible to other people.”

About Murals of the Holocaust

For 20 years, students enrolled in Western Kentucky University's VAMPY program, a summer camp for Verbally and Mathematically Precocious Youth, have designed and created murals about the Holocaust. Watch as students work on the 2017 mural and explore an exhibition of past murals at Louisville's Jewish Community Center.

Related to Murals of the Holocaust 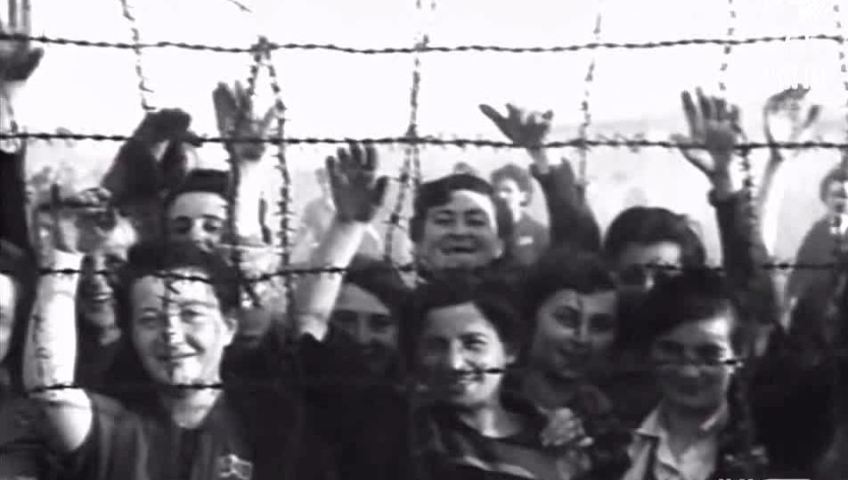