Bill sits down with spouses and political consultants Mary Matalin and James Carville, who were in Kentucky to speak to the Southern Legislative Conference.
Season 11 Episode 30 Length 27:18 Premiere: 08/14/16

Mary Matalin and James Carville Talk About the Politics of Today

James Carville was still a relative novice at political consulting when he arrived in Kentucky on a cold February day in 1987. His biggest credit to date was helping Robert Casey become governor of Pennsylvania a few months earlier. Casey had lost in three previous gubernatorial campaigns, so his fourth attempt was seen as a long shot at best.

Carville’s job in Kentucky wouldn’t be much easier.

A little-known Lexington bookstore owner named Wallace Wilkinson hired Carville to help him navigate the Democratic gubernatorial primary that year against two former governors and the sitting lieutenant governor. An early poll in the race had Wilkinson netting 1 percent of the vote.

But thanks to Carville’s efforts and Wilkinson’s pledge to institute a state lottery to support public education, the businessman went on to win the primary by nearly 10 points. Then he took the general election with 65 percent of the vote.

“We had a message in the lottery [and] a new way of doing things, and it took the state by storm,” Carville recalls.

The Louisiana-born strategist with the moniker of “The Ragin’ Cajun” would also help Brereton Jones in his successful gubernatorial bid four years later, and then guide Arkansas Gov. Bill Clinton to the White House in 1992.

Carville has maintained the friendships he made in the commonwealth almost 30 years ago. He even brought his future wife to the 1993 Kentucky Derby.

The husband-and-wife team of Carville and Matalin helped shape presidential elections for the better part of two decades, he for Democrats and she for the GOP. Now as commentators and authors the two remain astute observers of American politics. They recently appeared at the Southern Legislative Conference’s annual meeting in Lexington, and took a few minutes to appear on KET’s One to One with Bill Goodman.

Carville and Matalin squared off in the 1992 presidential campaign when he worked for Clinton and she worked for incumbent President George Bush.

Matalin says she was broke after losing that election because campaign staff earned so little in those days. Political operatives make significantly more money now and Matalin contends that’s created a lack of emotional attachment to the candidates and the causes they represent.

“We were so blessed to work at the level we did at the time that we did because it was a calling,” Matalin says. “It was not a career. We didn’t go into it for money.”

Communications technology has also changed dramatically in the last 30 years, but Matalin and Carville agree that a candidate’s message remains the most crucial part of a campaign. She says it must be relevant, clear, and easily repeatable by the candidate and voters. They attribute much of the success of this year’s Republican presidential nominee Donald Trump to his ability to communicate in exactly that fashion.

But a viable presidential candidate also needs the staffing sufficient to mount a 50-state campaign, and that’s where Trump is lacking, according to Carville and Matalin.

“The Trump campaign is not disorganized, it’s not messed up, it literally doesn’t exist,” Carville says.

Matalin says Trump’s children and two trusted advisors organized his primary campaign. But a general election requires a bigger, more experienced staff. She credits the Republican nominee for hiring Paul Manafort as campaign chairman. Manafort is a veteran lobbyist and consultant who has worked GOP campaigns since President Gerald Ford’s 1976 reelection bid. Now she says Trump and Manafort need to tighten their campaign organization and develop a voter turnout operation.

Falling Out of Line with the GOP
Matalin made headlines in May when she announced that she had switched her party registration from Republican to Libertarian.

“That’s because our party has abandoned some of the principles that drew a lot of us in in the first place,” she says.

At the time Matalin told news outlets that the Libertarian Party represents more of the constitutional principles she values. But many pundits saw Matalin’s move as another high-profile GOP defection caused by Trump’s unconventional candidacy. Carville sees his wife’s decision as a break with her own philosophy about political party dynamics.

“Mary used to say and it was sort of true that Democrats fall in love, Republicans fall in line,” Carville says. “They’re doing anything but falling in line now. This is a historic thing.”

Carville predicts Trump will continue to do well with white voters who do not have a college education, but he doubts the Republican will have much success beyond that demographic. Matalin acknowledges that Trump is not an “artful communicator,” but she contends the businessman’s appeal goes far beyond the “provincial, bigoted hicks” that she says the media likes to associate with his campaign.

Embracing New Orleans and the Future
As much as Matalin and Carville may disagree politically, they are totally united in their deep affection for New Orleans, where they have lived since 2008. The two even wrote about their city in their 2014 book “Love & War.” Carville says New Orleans isn’t just a place on the map.

“New Orleans is more of a culture,” Carville says. “There’s identifiable food, identifiable music, the architecture, the social structure is different…even the funerals are different… So we enjoy and embrace the culture and my whole family does.”

Carville’s mother was a locally renowned cook and family friend of the late chef and restaurateur Paul Prudhomme. Carville says she self-published her own cookbook in the 1980s that went on to sell 35,000 copies. Now Carville’s and Matalin’s two daughters have plans to republish the cookbook as a tribute to their grandmother.

The two political veterans also share an optimistic outlook for the future. Even when they consider the partisanship that now marks so much of American civic life, they say their daughters’ age group gives them hope.

“We both like to light candles rather than curse the darkness,” Matalin says. “We both have a faith in the millennial generation not tolerating this kind of division. They don’t.” 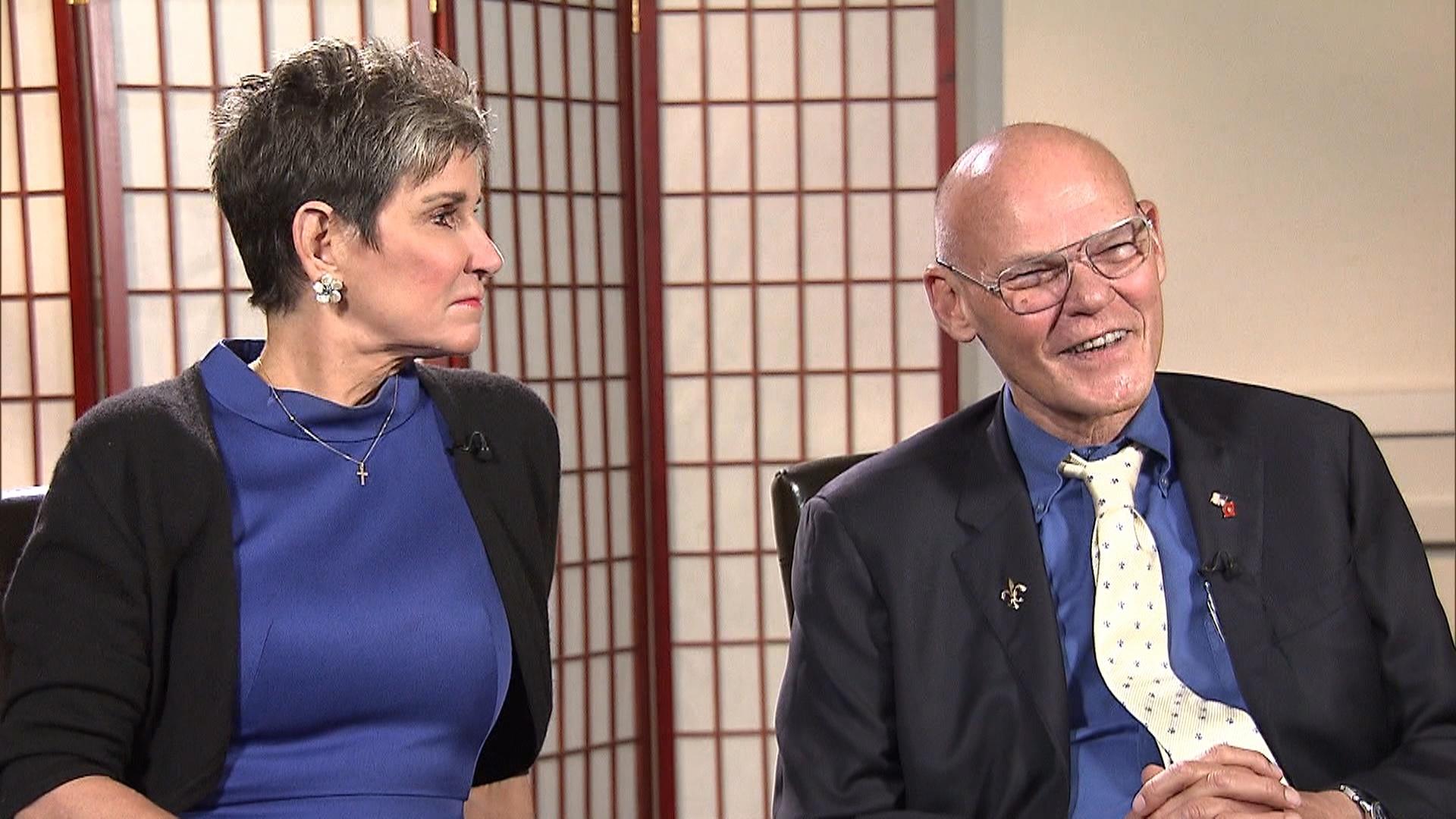