Kentucky's Senior Senator on the New President, the Pandemic, and His Political Future

But the then-Senate Majority Leader found a very different political landscape in the weeks that followed as Republicans lost not only the White House but control of the Senate. Along the way, the nation also watched an insurrection against the U.S. Capitol that was fueled by conspiracy theories President Donald Trump spread about the election results.

Even though McConnell said the president “provoked” and was “morally responsible” for the Jan. 6 attack, he voted against impeaching Trump.

Now as polling continues to show that a majority of Republicans believe the 2020 presidential election was stolen, McConnell wants to move on from the former president.

“I’m focusing now as the Republican leader of the Senate in unifying our conference against what I think has been demonstrated so far to be the most left-wing administration of my time in the Senate,” he says.

On the heels of passing his $1.9 trillion COVID relief package, President Joe Biden has outlined plans for a massive infrastructure bill and an expansion of the family safety net, which would total about $4 trillion combined.

After voting to spend trillions in COVID relief last year, McConnell now questions the need for additional stimulus packages with the pandemic on the wane.

“Based on the pandemic, we now have a national debt the size of our economy for the first time since World War II,” says the senator. “There’s a role for government but to me there’s a dramatic difference between a 100-year pandemic and how you should react to that, and business as usual.”

The senator says the American Rescue Plan Act (ARPA) that passed in March without a single Republican vote was “wildly expensive and unrelated to the needs of country.” He says only 10 percent of the $1.9 trillion package went to COVID-related vaccines and health care. McConnell contends such profligate federal spending is creating two problems: inflation and people staying out of the workforce so they can collect jobless benefits.

“What we’ve got here… is what could best be described as a bait and switch called infrastructure but much bigger with a whole laundry list of other things,” he says.

Then there’s Biden’s desire to raise the corporate tax rate to pay for the infrastructure bill. McConnell says the pre-pandemic economy was “rocking” thanks to the 2017 Republican tax cuts. He says any plan to now raise those taxes will guarantee GOP opposition.

“I think they’ll find the sledding going forward more challenging,” he says. “I hope the result of that will be that they’ll decide to operate in the center where we’re prepared to do business.”

If the infrastructure plan fails, McConnell says Republicans are open to discussing a compromise. Republican Sen. Shelley Moore Capito of West Virginia has proposed a plan that focuses on traditional transportation infrastructure totaling $570 billion. McConnell says that would be funded through gas taxes and user fees such as tolls.

As for other issues, the Republican leader says he hopes lawmakers can reach an agreement on a police reform bill. He says Sen. Tim Scott, Republican of South Carolina, is working with New Jersey Democratic Sen. Cory Booker and Democratic California Congresswoman Karen Bass to find a compromise on qualified immunity for police officers. McConnell says that without that protection it will become increasingly difficult to attract new recruits to law enforcement.

“So that is the last really challenging issue,” he says. “How do you improve policing and still have police?”

While he’s optimistic on police reforms, McConnell says he opposes the voting and elections reform legislation proposed by Democrats. The Senator calls the For the People Act a “horrible bill” that he says he will do everything he can to block.

“It’s a vast federal takeover of all American elections,” says McConnell. “They want to take public money and spend it on political campaigns… for people you don’t support.”

There is one area where McConnell agrees with President Biden: The need for all Americans to get a COVID vaccination.

But 40 percent of Republicans say they don’t plan to get vaccinated, according to recent polling. And it’s not just men. McConnell some women are also hesitant to take the vaccine because of social media rumors that say it could interfere with fertility.

While people continue to debate the need to wear face masks at this stage of the pandemic, McConnell says there is no doubt that the COVID vaccines are safe, effective, and necessary.

“I think we’re in a really complicated phase on the mask part,” he says. “What is not complicated is we need to get shots in arms. Every American who’s eligible needs to do that.”

The Republican drew criticism for his recent comment that 1619, the year the first enslaved people arrived in America, is not an important date in the nation’s history. McConnell joined other Republican senators in signing a letter to U.S. Education Secretary Miguel Cardona protesting a proposed Biden Administration rule that public schools address systemic racism in their curricula. They contend such teaching would be “divisive.”

“I think we all have a pretty good agreement about the nature of our original sin and the steps we’ve taken to try to get past it,” he says, “all of which is an important part of any objective analysis of the history of the country.”

Instead of highlighting the year 1619, McConnell suggests history studies focus on 1776, when the Declaration of Independence was signed, 1787, when the U.S Constitution was signed, the Civil War years of 1861-1865, and 1964 and 1965, when Congress passed the Civil Rights Act and the Voting Rights Act respectively.

Now 79 years old, the senator has faced questions about his future in Washington. Speculation increased after McConnell worked with state Senate President Robert Stivers (R-Manchester) on a bill to change how Kentucky governors fill a vacancy in a U.S. Senate seat.

Under the bill passed earlier this year by the Republican-dominated state legislature, governors can no longer select any person to fill a seat left open by the death or resignation of a senator. Now governors must select a temporary replacement from a list of three people provided by the executive committee of the political party of the departing senator.

McConnell acknowledges that Republicans took advantage of their supermajorities in the state House of Representatives and Senate to craft and pass the bill. Democrats decried the measure as another effort by state Republicans to strip power from Gov. Andy Beshear. The Democrat vetoed the bill, but lawmakers overrode his veto.

“This came about because I’d been watching over the years how vacancies were filled and thought this was a better way to do it,” McConnell says. “I understand why the governor didn’t like it. I wouldn’t either if I had been in his shoes.”

Even with the new legislation in place, McConnell says he has no plans to step down from Senate leadership or the seat he has held since 1985.

“I’m still in the height of my career,” he says. “I’m at the top of my game, I enjoy the confidence of my colleagues.”

Despite the debate roiling Republicans about former President Donald Trump and his role in the future of the GOP, McConnell says he is focused on the 2022 midterm contests and restoring GOP majorities in Congress.

“I think the ’22 election is not going to be about what Republicans may be saying about each other, but rather how the American people feel about the performance of the new administration,” says McConnell. 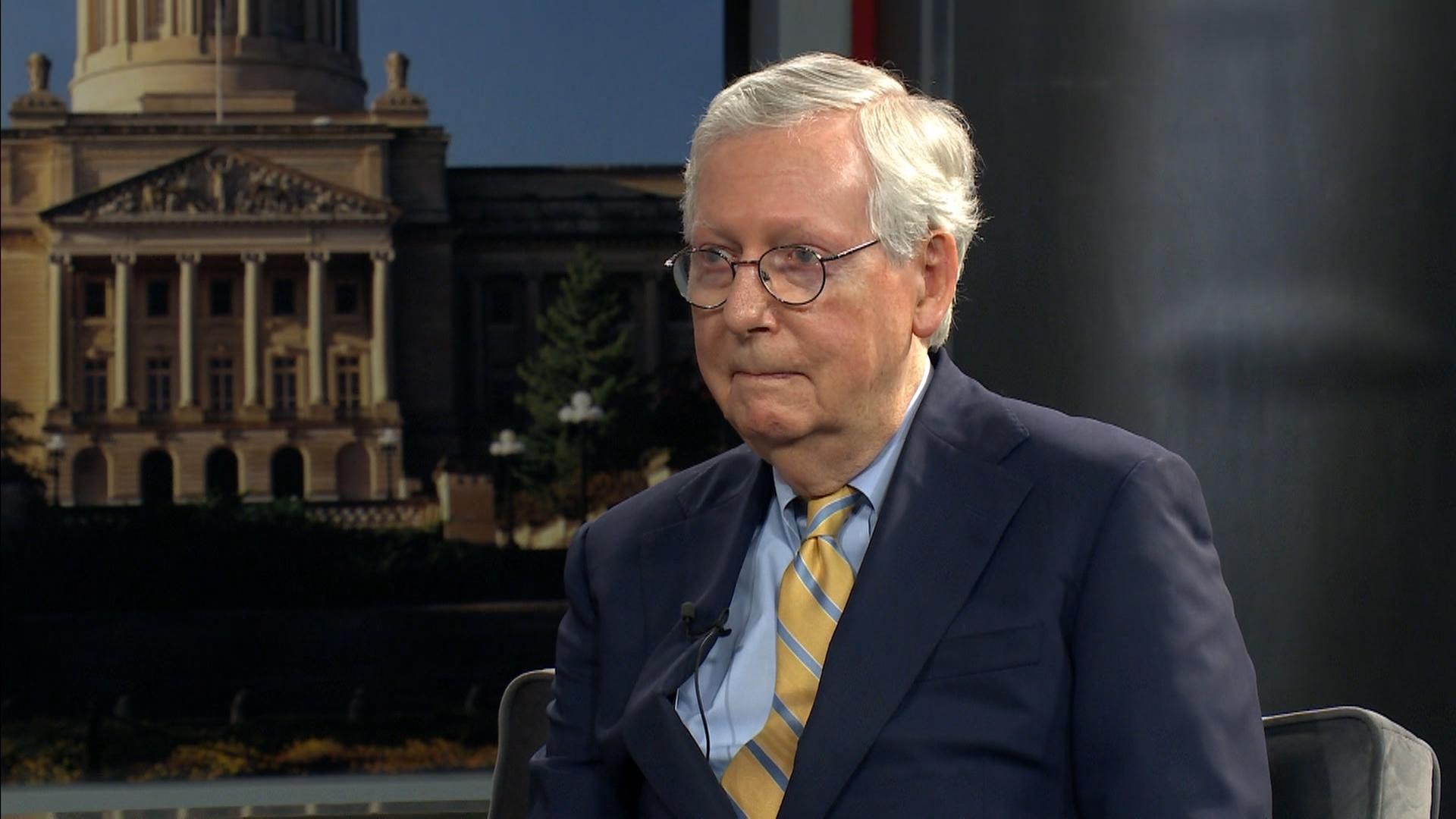