Does teaching students about the history of racism and segregation in the United States perpetuate racial divisions that have affected the country since its founding, or can it help break down old stereotypes and discriminatory systems that keep all Americans from reaching their full potential?

That’s the essence of a debate unfolding in state legislatures across the country: Whether K-12 students should learn about critical race theory, a 40-year-old academic concept that explores the legacy of racism in America and how it has shaped individuals, institutions, and public policy.

“Look at what’s been taught before… or what’s not been taught before, then you get an idea of why critical race theory is so important,” says Brian Clardy, associate professor of history at Murray State University.

For example, Clardy contends for far too long some students learned that the Old South was glamorous, that slaves were happy, and that northern agitators started the Civil War. He says students deserve to know and be able to discuss American history as it occurred, not some sanitized or romanticized version of it.

Clardy says he understands why such discussions about the war, the Jim Crow era, or current racial issues are uncomfortable, but he says simply ignoring these facts will leave young people misinformed, and they will squelch important dialogues that need to happen among students of all races.

“What critical race theory [does] in my view is that it allows dialogue, it allows people to be open and frank about what has happened and how this shapes institutions today,” says Clardy.

Opponents of CRT say it’s fine to teach students the basic facts and events of American history and point out where the nation has failed to provide freedom and opportunity for all, but they reject what they see as an indoctrination of young people to believe that America is inherently racist and that Americans are either oppressed or the oppressors.

Will Skillman, an education fellow at the Heritage Foundation, fears that CRT is also meant to be applied in life beyond classroom debates.

“Critical race theorists want people to treat others differently based on the color of their skin,” says Skillman. “There are lesson plans around the country that deal with what is called white privilege or that make the case that there is guilt to be had based on the color of someone’s skin.”

Instead of fostering conversations that can break down racial barriers, Skillman contends CRT actually promotes discrimination, divides people into tribes along racial lines, and tells some children that multiple parts of the world want to oppress them.

“That’s the wrong lessons for students to be learning,” says Skillman. “We need to be learning the lesson that you can create your future, and that the rights and the freedoms that we have in America are worth defending.”

While Skillman says individual racist acts still occur in the U.S., he contends systemic racism is no longer an issue thanks to progress the nation made during the civil rights movement and to changes brought by the 1964 Civil Rights Act and other legislation.

Although CRT has existed in academia for 40 years, the political debates over its teaching in public schools are more recent, sparked in part by reporting done by the New York Times’ 1619 Project (marking the 400th anniversary of the arrival of the first slaves in colonial America), by last year’s Black Lives Matter protests, and by a new grant program by the Biden Administration’s U.S. Department of Education to support instruction about systemic racism issues.

Arkansas, Idaho, Oklahoma and Tennessee have enacted limits on the teaching of CRT tenets in their public schools, and lawmakers in 21 other states are considering similar legislation.

The issue surfaced in Kentucky earlier this month when state Rep. Joe Fischer (R-Fort Thomas) prefiled legislation for the 2021 General Assembly session that would limit what public and charter schools could teach students about racial issues. Fischer says he crafted his bill after a high school in his northern Kentucky district proposed adding CRT to a class curriculum next year. (The local school-based decision-making council rejected that proposal.)

Based on the CRT-related bill passed in Tennessee, Fischer’s proposal provides a dozen principles that teachers should not violate. These include instruction that says Kentucky or the U.S. are irredeemably racist, that one race or sex is inherently superior to another; that someone is inherently racist or sexist simply because of their race or gender, or that people today bear responsibility for acts committed in the past by individuals of the same race or sex. Schools should also not promote divisions between people based on race, sex, or religion, or make students feel uncomfortable about being a certain race.

“Any parent or any citizen who believes that these theories are being taught as facts to young children can file a complaint,” says Fischer. “The burden of proof would be on that citizen who files the complaint.”

The legislation charges the Kentucky Attorney General with deciding whether a violation has occurred based on a preponderance of the evidence. If a violation is found, the state Department of Education would withhold from that school’s funding an amount of $5,000 for each day the school does not remedy the situation after being served notice of a violation.

State Sen. Gerald Neal (D-Louisville) says the prospect of fines and punishments for what a teacher presents in the classroom will have a chilling effect on education. He describes Fischer’s proposal and similar measures in other states as a “dog whistle” for conservatives and a reactionary backlash to recent calls for America to reckon with its legacy of racism and white supremacy.

The senator contends the kinds of discussions that CRT can foster are essential to helping students develop critical thinking skills and preparing them for life in an increasingly diverse society. Neal also rejects the claim by CRT opponents that teaching students about racism in the U.S. will only exacerbate racial animus. He says Americans are already racially divided and will grow more so without the kinds of discussions that teachers can facilitate.

“The question is, will we face the realities and discern the facts and critically examine them in a way that we can come out with a better outcome?” says Neal. “We need the challenge of the discourse between various individuals and ideas and facts versus those things that people believe… in order to get to some recognizable truth, perhaps, that we can collectively embrace.”

The proposal has already drawn opposition from teachers, school administrators, and state officials. Kentucky Education Commissioner Jason Glass says he opposes efforts to limit free speech in classrooms and micromanage teachers. The Kentucky Association of School Superintendents says governance structures at the local level already exist to deal with questions of curriculum and have proven effective at dealing with such concerns. The Kentucky School Boards Association says broad mandates from the state about what should be taught to students and how they should be instructed undermine the local community’s ability to respond to the needs and interests of their students.

Gary Houchens, professor of education administration at Western Kentucky University, agrees that legislation isn’t the best way to govern classroom activities. But he says local school-based decision-making councils contain more teachers than parents, and that those groups aren’t accountable to the general public. So, he contends they may not be in the best judges of whether it’s appropriate to offer instruction based on CRT and its underlying tenets, which he argues reject logic and reason.

“So without some significant reconsideration of the structure of site-based councils, parents really have no recourse in this situation but legislation if they want to make sure that some of these problematic concepts are limited in the way they’re presented in their children’s classrooms,” says Houchens, who is also a member of the Board of Scholars for the Bluegrass Institute for Public Policy Solutions.

Houchens says he uses CRT in his WKU classes to help students understand how education policy can affect vulnerable and marginalized students. But he adds that CRT is just one of the perspectives he teaches.

“The problem, whether it’s in K-12 or higher education, is when the tenets of critical race theory are treated not as a perspective but as the gospel truth, as the only lens through which we can view these problems,” says Houchens. “I think that’s what people are legitimately concerned about.”

But those who support CRT as a teaching tool say its critics mischaracterize what the theory presents to students.

“All critical race theory is saying [is] let’s wrestle with the hard stuff about our history, and give students the capacity to think really critically and come to their decisions about what those things mean,” says Centre College Vice President for Diversity, Inclusion, and Equity Andrea Abrams.

While some Americans argue that systematic racism is a thing of the past, Abrams contends it’s alive and well in modern society, as evidenced by academic achievement gaps and the disproportionate numbers of people of color who are poor or imprisoned. She says CRT does not reduce everyone to either oppressor or the oppressed, but she says it does encourage students to explore the imbalance of power that has existed between white and Black Americans.

“It’s not saying every white person is inherently a racist,” says Abrams. “It is saying that white people have access to power and to privileges on the basis of the color of their skin that is part of the system that other groups don’t have as much access to, and we need to talk about that and we need to change that.”

Houchens admits there are instances where people do benefit from being white, but he contends that’s not true for all white Americans. For example, he says a poor white child growing up in Appalachia wouldn’t feel any sense of white privilege. Abrams says exploring how power and privilege play out across society is critical to helping children of all socio-economic backgrounds become enlightened and empathetic. 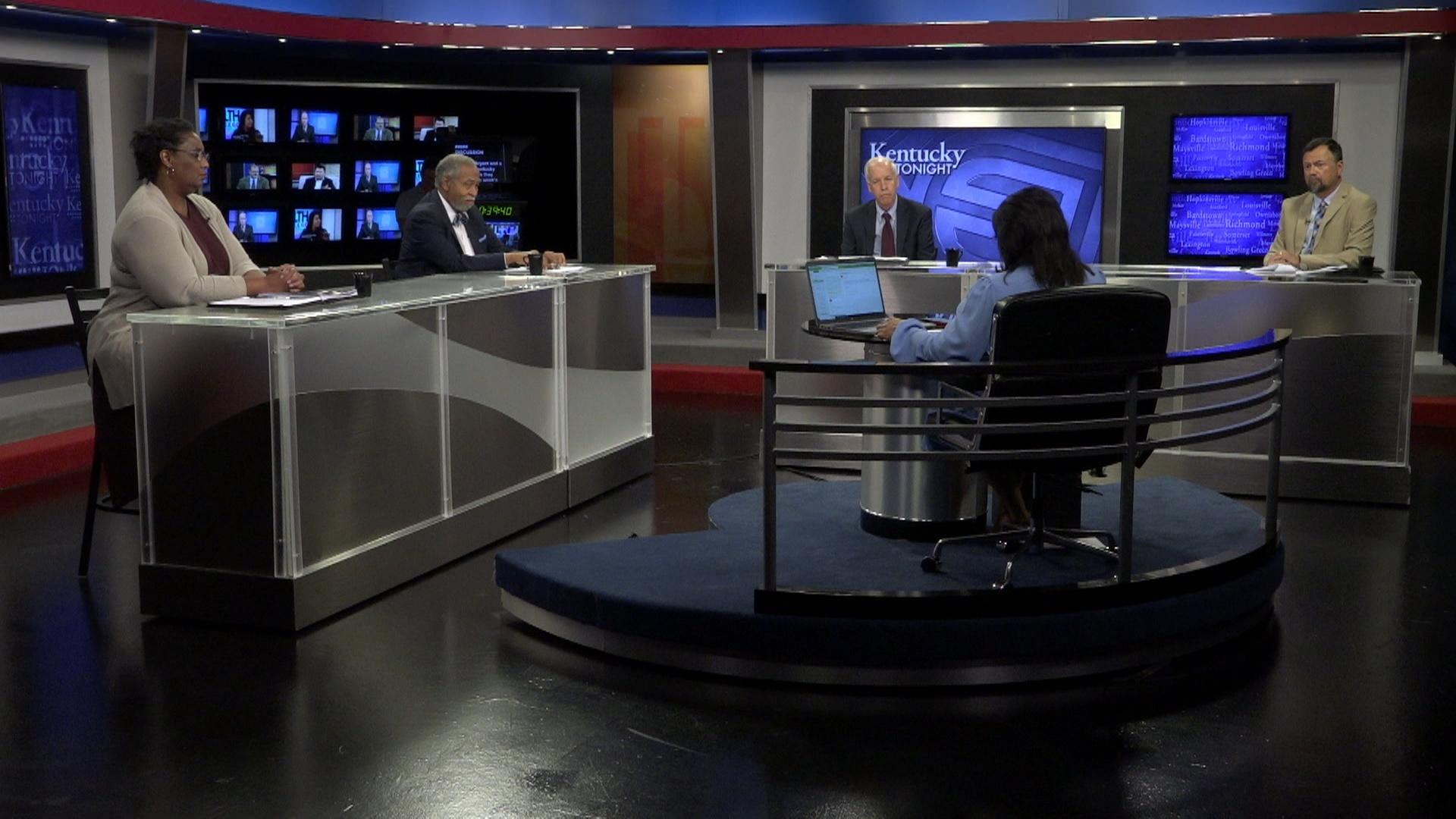